Stormy Daniels had a decidedly less coy appearance on Jimmy Kimmel Live! Tuesday night compared to when she last appeared in January.

In her latest spot on the ABC late-night show, Daniels, whose real name is Stephanie Clifford, reenacted salacious scenes from her new memoir that features a sexual relationship with President Donald Trump.

Daniels described meeting with Trump in his hotel room at a golf tournament in Lake Tahoe for what she believed to be dinner. Instead, he answered the door in black, silky pajamas. “I’m pretty sure I thought he was channeling Hugh Hefner,” said Daniels. Then adding, “Significantly less sexy.”

Of the detail that Daniels spanked Trump with a magazine, Kimmel asked “What does he do, when you spank Donald Trump?” to which Daniels responded, “Do you want me to show you?” Kimmel eventually conceded and Daniels used her book to spank him.

After the spanking, Kimmel paused to pray. “Please, God, let him be watching this right now,” he said of Trump.

Daniels was there to promote her memoir, Full Disclosure, which hit bookshelves Tuesday.

The host, who read the book cover to cover, asked Daniels about specific details she included about their three-hour encounter, like when she rummaged through Trump’s bathroom essentials to discover that he uses Old Spice and Pert Plus, and how Trump didn’t use a condom when they had sex.

“And [then] you made love,” Kimmel said.

“Gross, what is wrong with you?” she retorted. “I laid there and prayed for death,” Daniels said of having sex with Trump.

When Kimmel asked her why she went through with the act, she replied, “I still don’t know.”

Eventually, the conversation turned to Trump’s private parts and Daniels’ written description. Kimmel read the passage — which he had bookmarked and highlighted — where Daniels described Trump as being “smaller than average” and said his penis was “like the mushroom character in Mario Kart.”

Kimmel then pulled out a phallic display of orange mushrooms and asked her to pick the one that most represents “the Commander in Chief of the United State’s military,” according to her photographic memory.

“Do you know how much hate mail I’ve gotten from people who love Mario Kart?” she said of the popular video game. “In one day, I managed to ruin half of America’s childhood and mushroom farming everywhere.”

After asking Kimmel to hold up the display of mushrooms so it’s “coming at me at the correct angle,” she made her choice. “I feel like we’ve gained a perspective that Bob Woodward wasn’t able to get in his book, that’s for sure,” Kimmel joked. (Watch in the video player above.)

When Daniels last appeared on Live!, she neither denied nor verified that she had signed an NDA that barred her from speaking about Trump and her (then-alleged) allegations that she had sex with him at a golf course in 2007. Daniels has since outright claimed that the incident occurred, and that she signed an NDA she says is invalid because Trump never signed it.

Kimmel also produced a puppet that looked like Daniels and played “Never Have I Ever” with it, with Daniels answering questions. Despite the runaround tactic, Daniels didn’t give much away about her claims at the time.

Much has changed since that January appearance and when Kimmel asked her Tuesday why she was now being more forthcoming about her relationship with Trump this time, Daniels replied, “I have less beeps to give.”

Kimmel, along with his other (very impressed and amused) guest Sarah Paulson, were visibly excited as Daniels shared her intimate details and commentary about Trump. “I don’t think I’ve ever seen Jimmy this happy,” Daniels told Kimmel — something he agreed with — more than once during the conversation. 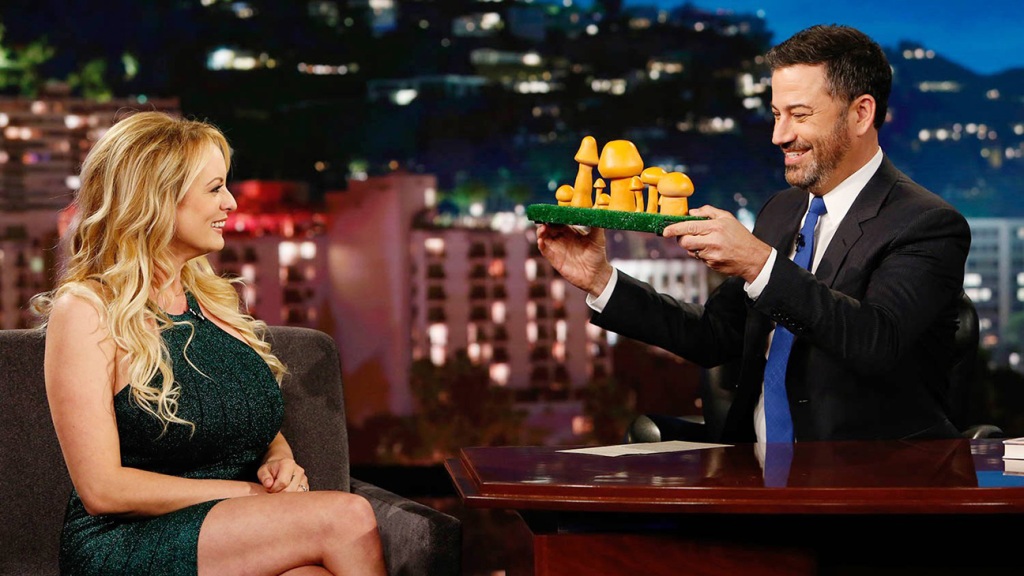