Five months after the premiere of a wildly successful second season, the cast and creatives behind Netflix’s Stranger Things gathered at the Dolby Theatre on Sunday night to discuss their on-set dynamics and the pressure they feel after the success of the first season, between screams and shrieks from an enthusiastic audience.

But first, on the red carpet before the panel executive producer Shawn Levy revealed that the third season would take place one year after the second season, during the summer of 1985. He also added that Eleven (Millie Bobbie Brown) and Mike (Finn Wolfhard), and Lucas (Caleb McLaughlin) and Max (Sadie Sink), respectively, would all be couples at the beginning of the season. None of the cast had gotten the script yet, so Brown, who plays Eleven, learned that she would be in a relationship on the carpet.

“Mike and Eleven and are going strong, so that’s a relationship that continues, and same with Mad Max and Lucas. But again, they’re like 13- or 14-year-old kids, so what does romance mean at that stage of life? It can never be simple and stable relationships and there’s fun to that instability,” Levy said.

Levy also revealed that Steve Harrington, played by Joe Keery, will have more of a role in the next season. “We’ll definitely get to see some more of Steve Harrington in season three, and I’ll just say we won’t be abandoning the Dad Steve magic. I don’t want to say much more, but I literally feel that we were walking along and we stumbled onto a gold mine with Dad Steve,” Levy said.

The 1985 film Back to the Future will be a reference in the new season, which will be in production shortly, Levy said. “We are going back to work this month,” he said on the panel, which proceeded after a screening of the second season’s first episode.

Also during the panel, the cast discussed their on-set bonding and the most challenging aspects of the series for them. Winona Ryder, who plays Joyce, kicked off the conversation by revealing that when she was in a room with two of her crushes growing up, including moderator Wil Wheaton (an actor in Stand By Me) and her co-star on Stranger Things season two, Sean Astin, who plays her boyfriend.

“If you got to see this episode just now, you can see that I got to enjoy that,” Astin joked. (In the episode screened, it is revealed that Ryder and Astin’s character are a couple.) 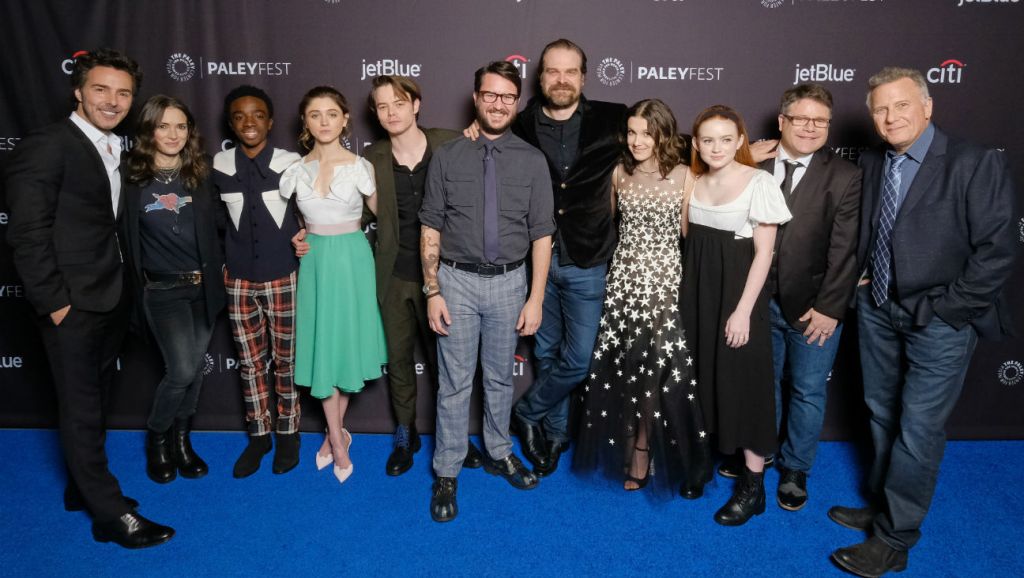 When asked about the transition between season one and season two, Millie Bobbie Brown added that season two was different because there was “double the security” and fans would camp out outside where the cast was shooting. But she added that it was easier to act, she said, because she had a firmer grasp on her character: “With season two I had the freedom to say, ‘I think Eleven would do that.'”

Levy added that at the beginning of season two, the cast gathered around the table and he told them that they were going to do a “willful tuning out of all that cultural noise so we can just come back as a family and do our job.”

Brown revealed that she and Sink bonded on set. “I was like ‘I love her, also, another girl'” she said, joking that she was happy to “not tal[k] about video games for a while.” Later she joked that she was annoyed that Sink had to learn skateboarding for the season. “It was like, ‘Oh my god, come have a sleepover,'” she said.

When discussing the performance of Noah Schnapp, who plays Will, in the second season in which he plays a dominant role, Levy revealed that around set he called the season “the season of the Schnapp.”

David Harbour, who plays Jim Hopper on the series, revealed that in working with Brown on season two, he came to feel about Brown the way he thought about a daughter. “I don’t have a child. All of my experiences of love have either been romantic, or my parents, or a dog,” he said, prompting laughs. He said that through his character he discovered “a love that was human but pure, like you would take a bullet for someone.” By the end of season two, Harbour negotiates to adopt Brown’s character, Eleven, as his daughter.

Brown added that the most challenging scenes for were the ones where she had to get mad at Hopper. “Those scenes were so raw and real. The reward is, to be honest, the scenes,” she said. “We are like father and daughter.”

Harbour, in turn, joked that the most challenging part of the show is that “I’m usually in extremely good physical shape.” Harbour’s so-called “dad bod” has become an online meme since season one.

Winona Ryder said that the most challenging part for her was playing a woman whose son is in constant peril. “Charlie [Heaton] and I had one scene where I wasn’t a basket case and then right off the bat, it was my worst nightmare,” she said. She added that Heaton, who plays her son, sometimes distracted her with “the accesses he has to his emotions.”

Stranger Things is set in the 1980s in Hawkins, Indiana, a small town that plays host to a national laboratory and, over the course of the series’ first two seasons, a few of the supernatural evils that its experiments have unleashed. Tween protagonists Mike (Wolfhard), Dustin (Gaten Matarazzo) and Lucas (McLaughlin) first begin to notice things are amiss when their friend Will (Noah Schnapp) goes missing, and they discover a girl who calls herself Eleven (Brown) and recalls being a test subject for most of her life in the woods. Over the course of the first season, the trio discovers a realm called the “Upside Down,” a shadow world of Hawkins, where creatures like the Demagorgon, “demo-dogs,” slugs and massive shadow monsters that the heroes called “Mind Flayers” roam. The heroes also learn that Eleven, who has psychic and telekinetic abilities, has entered the Upside Down multiple times and can communicate with Will.

Where the show left off in season two, Will, returned from the Upside Down, had been freed of his psychic connection to a Mind Flayer and Mike, Dustin, Lucas and Will had welcomed another friend into their circle, Max (Sink). Eleven had found her mother and returned to the friend group and Mike’s sister Nancy (Natalia Dyer) and Will’s brother Jonathan (Heaton) had exposed some of the nefarious activities of the Hawkins National Laboratory to the press. The season ended on a sweet note after Eleven and Mike, who have a budding romance, reunited and the crew went to the Snow Ball together.

Stranger Things quickly became a cultural phenomenon when it premiered on Netflix in July 2016, launching memes like #JusticeforBarb (which protested one character’s quick and untimely death) and leading to online jokes about Eleven’s love for frozen Eggo waffles. According to Nielsen, the season two premiere in 2017 attracted 15.8 million viewers (about a live-plus-three rating) within its first three days of launching, and that at least four million U.S. viewers watched every episode of the season. Parrot Analytics has called Stranger Things the most popular show in the country according to their data.

Renewed for a third season at Netflix, the new season has landed massive paydays for its ensemble cast, and recruited two new recurring characters: Lucas’ sister Erica (Priah Ferguson), who will play a larger role in the upcoming season, and new character Robin (Maya Thurman-Hawke), who will play a young woman who is bored at her job until she learns more about Hawkins’ dark secrets. A release date for the new season has not been announced.

“We were genuinely upset. And we were surprised to hear that anyone felt uncomfortable on set,” Levy said. “I want to be really clear that nobody has been targeted in any way on the basis of race or gender. We all cherish the family that we’ve created onscreen and cherished equally the family that we created on set and we’re going to remain committed to the well-being of that,” Levy said on the PaleyFest red carpet of the allegations.

'Stranger Things': How Season 2 Plays Out