The first full Stranger Things season-two trailer, released during Comic-Con, offered at least one major revelation about the second year of the Netflix series: the Ghostbusters were coming to Hawkins.

While it wasn’t the focus of the full season, Halloween (and therefore the likes of Doctors Venkman, Spengler and Stantz) ended up playing a pivotal role in the second episode of the season, “Chapter Two: Trick or Treat, Freak.” Across two seasons of the Duffer Brothers drama, the Halloween-themed episode stands out as one of the very best, filled with great character moments and iconic imagery (including a killer ending as Gaten Matarazzo’s Dustin peers into his growling garbage can), not to mention an incredibly potent shot of nostalgia through its depiction of the haunted holiday.

With Halloween very much on the mind, let’s stop for a moment to focus on all of the ways “Trick or Treat, Freak” deftly dabbles in the Halloween experience:

How 'Stranger Things' Season 2 Expands its Upside Down Universe

• The Hawkins party dresses up as the Ghostbusters, because the movie is all the rage at that time in 1984, and there are few things more Halloween than tapping into the latest fad.

• Mike (Finn Wolfhard) and Lucas (Caleb McLaughlin) argue over which one of them laid claim to Peter Venkman, because of course there can’t be more than one of the same costume within the same friend group.

• The boys quickly realize nobody else in their class wore costumes to school for Halloween — basically the nightmare scenario, and one many of us have dreamed through, if not outright lived through. 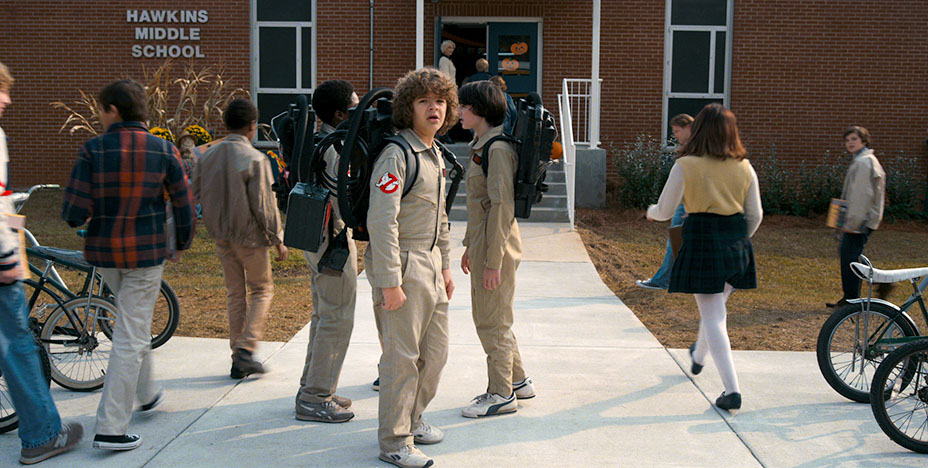 • Dustin and Lucas invite Max (Sadie Sink) to come trick-or-treating, albeit without Mike’s input, which leaves him understandably frustrated. After all, the social politics involved in picking your candy crew are delicate, given all the impending trades at the end of the evening.

• Speaking of which, anyone crazy enough to surrender their Three Musketeers bars can come trick-or-treating with me anytime.

• Another reason why bringing an outsider into the trick-or-treating plans can cause concern: Max shows up dressed as Michael Myers, who totally doesn’t fit at all within the Ghostbusters aesthetic. A frustrating experience many have encountered, surely.

'Stranger Things': All the Pop Culture References in Season 2

• Poor Will Byers (Noah Schnapp) winds up bullied by masked teenagers, yet another all-too-real fear many of us have experienced directly. (No? Only me? Come on, ‘fess up!)

• Looking beyond the core four (plus Max), “Trick or Treat, Freak” embodies various other kinds of Halloween experiences, whether that’s indulging in too much “fuel,” a la Nancy (Natalia Dyer), being an embarrassing parent (or parent figure) by wearing a cheap Dracula costume, a la Bob (Sean Astin), or even going to Halloween parties dressed up as a guy who hates parties, a la Jonathan (Charlie Heaton).

• There’s even Hopper (David Harbour), who celebrates Halloween by completely forgetting it exists — and ultimately taking another person’s candy as his own. Once again, when it comes to “Trick or Treat, Freak,” universally relatable Halloween experiences abound.