Earlier in the morning, on the day his life changed forever (again), Will Byers (Noah Schnapp) received some well-intentioned bad advice from a man named Bob during season two of Netflix’s Stranger Things.

Played by Sean Astin, Bob was only trying to coach his girlfriend Joyce’s (Winona Ryder) young son into being brave enough to stand against figments of his own imagination. In essence, Bob’s advice was this: when confronting nightmares, it’s best to stand your ground and shout the void away. Maybe not a bad practice when the threat truly is nothing more than a bad dream — but in poor Will’s case, not a great tactic when confronting the Mind Flayer, the apparent master of the Upside Down.

Nevertheless, Will leaned on that advice and made his stand against the so-called Shadow in the Sky at the end of the third episode of Stranger Things season two, titled “Chapter Three: The Pollywog.” As a reward for his bravery, Will became infused with this inexplicable creature’s essence, launching the boy and the season at large into the next stage: Will as an unwitting spy for a terrible force of Upside Down devilry.

Before the veritable possession, however, it’s worth pointing out the sheer bravery in Will’s decision to stand his ground — not to mention the work put into the moment by Noah Schnapp, the young actor tasked with embodying Will’s wounded world.

“I remember watching him on the football field in the middle of the night, screaming at nothingness up above: ‘Go away! Go away!'” says Shawn Levy, one of the Stranger Things executive producers, as well as the man who directed the episode in question. “He had tears in his eyes, and he was shredding his throat raw — and he just did that kind of primal work all season long.”

As Schnapp remembers it: “This year was the year I drank the most tea. I had a lot of screaming this season.”

Indeed he did. If Will was tucked away from the screen for the vast majority of season one, he’s front and center throughout season two. Will’s relationship with the Mind Flayer serves to fuel the fires of the season, inadvertently causing him to betray his loved ones at points, and charging Schnapp as an actor with some physically demanding performances — whether that’s tied to a chair or a surface during something as routine as a doctor’s visit, or something as extreme as an exorcism.

“I definitely did research on YouTube and Google into possessions,” Schnapp tells The Hollywood Reporter about how he so convincingly embodied Will’s physicality this season. “It’s not a proven scientific thing that happens, but I looked at stories and what happens to people who have been through that. I dug deep into that. I simply thought: ‘What would it be like to be inside this massive, powerful monster’s brain?’ Because it’s really like I’m in its brain, and it’s taking my whole body over.”

Long before season two entered production, Schnapp was fantasizing about a darker turn for Will. It’s easy to see why: season one ended with Will vomiting an otherworldly slug into a sink, what we now know as the infant form of the “demodogs,” as Dustin (Gaten Matarazzo) coins the four-legged monsters spawned from the Upside Down.

“It was so exciting for me,” says Schnapp. “My character is going through so much stress and emotion, and I got to play with so many different emotions this season, that it was a real acting challenge for me. It’s very weird, how I found out about it. We’ll get the scripts and I start reading them, and all of the sudden, my character is being sucked in by a monster. And I’m like, ‘Whoa, I get to do this? Are you kidding?’ I was so excited to get to play Will this year.” 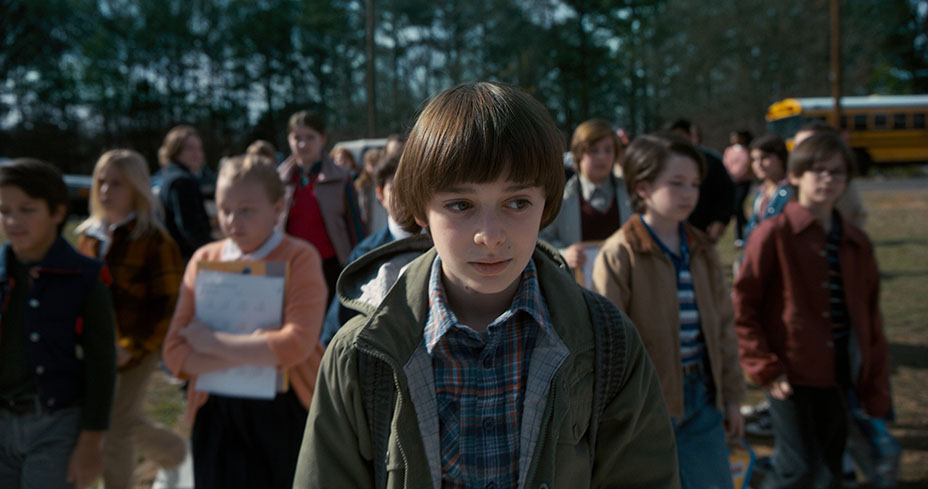 According to the Duffer Brothers, the siblings responsible for bringing Stranger Things to life, it was always part of the plan to take Will in this darker direction — though they readily admit they weren’t sure at first if Schnapp could handle what was ahead in season two.

“The truth about Noah is we didn’t know if he was going to step up in the way that he did,” says Matt Duffer. “We knew he was a very good actor when we cast him in season one. We had him read possession types of sides, because we knew if there was going to be a season two, that’s where we were going to go with it. We needed a kid we thought might have that range. But he was 10 years old at the time. He’s our youngest child. I don’t think he would have been able to do it that year. But he came in in season two and he just blew us all away.”

“I think in a lot of ways, we were lucky,” he continues. “The whole season was revolving around him and resting on his shoulders. I don’t think he realized that. We didn’t have that discussion with him. You don’t want to freak the kid out. He really stepped up and he really impressed and surprised all of us. We knew he was good, but we didn’t know he was that good. But sometimes, you have to take chances like that on these actors. We rolled the dice on Noah, and luckily it panned out.”

Now that the Duffers fully know and appreciate Schnapp’s ability to tap into Will’s physical and emotional torment, how can they possibly resist the urge to toss him into that darkness once again? By the time the second season ends, Will appears to finally be free from whatever hold the Upside Down has over him — and according to Matt Duffer, it looks likely to stay that way.

“I feel like we really put Will through the wringer,” he says, “and maybe now we’re going to give him a break at least.”

For his part, Schnapp isn’t so sure that Will’s association with the Upside Down is behind him for good.

“I personally think it’s not all out of him,” says the young actor. “I feel like it can’t be. There’s this massive monster taking over all of Hawkins, and all you have to do is light a few fires and turn on a few heaters, and he’s gone? It just doesn’t make sense to me, really. He’s still there — I just don’t know how.”

Who do you trust in this situation — the writers of the show who say Will is free from the Upside Down, or the young actor who became the physical avatar for that supernatural anguish? Before you answer, it’s worth keeping in mind that Schnapp called his shot on a darker Will well ahead of season two, as he said in a September 2016 interview: “My guess is that maybe he’s going to become evil in the next season. If he’s coughing up these baby Demogorgons, or eggs, or something, maybe he’s incubating or holding these eggs inside of him and he’s trying to fight his good side against his bad side in the next season. That would be cool to see, to see him become evil.”

In other words, in addition to being an incredibly willing actor, Schnapp’s storytelling instincts shouldn’t be ignored. Whether or not he’s free of the Upside Down’s influence, don’t expect the erstwhile Will Byers to sit on the sidelines (or “go away,” as it were) whenever a third season of Stranger Things comes to pass.

What’s your take on Schnapp’s turn as Will this season? Let us know in the comments below, and make sure to keep following THR.com/StrangerThings for continuing coverage of season two.