For the Fourth of July holiday weekend, Stranger Things fans are advised to keep some tissues handy — because telekinetic nosebleeds are very much on their way.

Chief Jim Hopper (David Harbour), mind-bending Eleven (Millie Bobby Brown) and the rest of the Hawkins faithful are on their way back to Netflix with a third season of Stranger Things, premiering Thursday. Clocking in at eight episodes (one installment shorter than season two), Stranger Things 3 marks the streaming service’s first new story set in the world of Hawkins and its neighboring “Upside Down” dimension since October 2017, when the second season was released. With so much time between then and now, it’s reasonable to expect significant changes within the Stranger Things universe. In that regard, look no further for a rundown of those changes, and more details on what to expect from season three.

Where season two left off: The Mind Flayer, an all-powerful force from the Upside Down, infiltrated Hawkins by taking possession over young Will Byers (Noah Schnapp). The only way to protect him and the rest of the town from a full-on takeover: Eleven, who leveled up her powers by traveling to Chicago, meeting a similarly super-powered friend, and returning with increased mastery over her skills. Eleven sealed the gate between Hawkins and the Upside Down, seemingly ending the threat once and for all. Beyond the epic victory, several characters underwent significant personal shifts: Lucas (Caleb McLaughlin) started dating Max (Sadie Sink), the new kid in school; Mike (Finn Wolfhard) and Eleven solidified their young romance; Eleven has been authorized to step out of the shadows and into society; the Hawkins Lab group has been destroyed; Joyce Byers (Winona Ryder) loved and lost, forced to watch her boyfriend Bob (Sean Astin) die at the maws of so many “demodogs” from the Upside Down; Dustin (Gaten Matarazzo) and Steve Harrington (Joe Keery) became best friends; Jonathan (Charlie Heaton) and Nancy (Natalia Dyer) became an item, thanks to some questionable prodding by conspiracy-minded Murray (Brett Gelman); and of course, the Mind Flayer is still at large, last seen towering over Hawkins in the season two finale’s final image.

The top secret story: Beyond the temporal setting, it’s hard to speak exactly about the season three storyline, so perhaps it’s best to take the official word from the streamer itself. Here’s the story, according to Netflix: “It’s 1985 in Hawkins, Indiana, and summer’s heating up. School’s out, there’s a brand new mall in town, and the Hawkins crew are on the cusp of adulthood. Romance blossoms and complicates the group’s dynamic, and they’ll have to figure out how to grow up without growing apart. Meanwhile, danger looms. When the town’s threatened by enemies old and new, Eleven and her friends are reminded that evil never ends; it evolves. Now they’ll have to band together to survive and remember that friendship is always stronger than fear.” 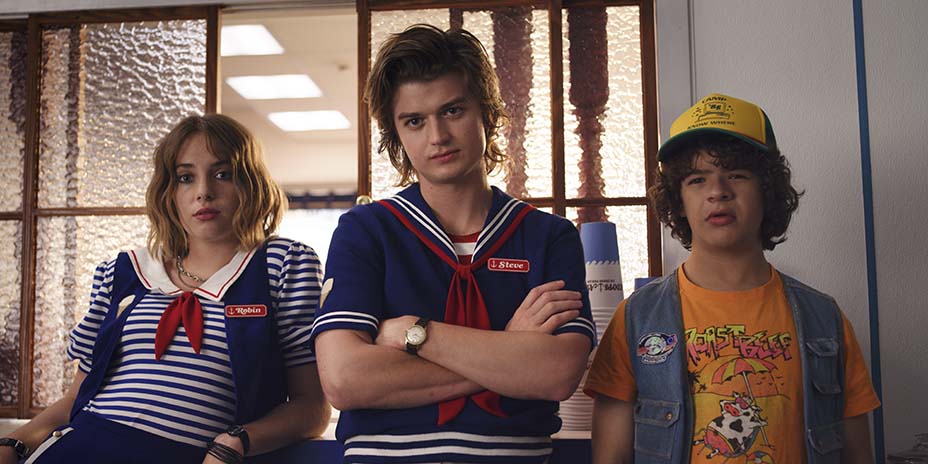 The early clues: As has become the series’ custom, Stranger Things fans don’t need to wait for the season’s release to start putting puzzle pieces together. Netflix has stealthily released clues to the greater season three story in a variety of formats, including baked into trailers for the new year. Study them closely, if you want to feel one step ahead of the Hawkins gang during season three.

New episode titles: Ahead of the season, Netflix released a video teasing the names of the eight new episodes in season three, as has become the Stranger Things tradition since the first season. Those titles, according to Netflix:

New to Hawkins in season three:

• Maya Hawke (Little Women), joining Stranger Things in the season’s most prominent new role: Robin, a sardonic ice cream scooper who becomes intertwined in the Upside Down drama by way of colleague Steve Harrington and his best friend Dustin Henderson.

• Cary Elwes (The Princess Bride) is on board as Larry Kline, the corrupt mayor of Hawkins.

• Jake Busey (Enemy of the State) also stars as Bruce, a reporter at Hawkins’ local newspaper.

• Behind the lens, Stranger Things welcomes a new director into the fold: Uta Briesewitz (Westworld, Orange Is the New Black), responsible for helming the season’s fifth and sixth episodes. The Duffer Brothers and executive producer Shawn Levey directed the remaining six episodes.

Biggest upgrades: From season to season, the person with the most increased role in year three of Stranger Things is, without question, Priah Ferguson as Erica Sinclair, younger sister to eagle-eyed slingshotter Lucas. A breakout comic relief character in season two, Erica becomes an active part of the story in season three, her quick wit matched only by her incredible capacity to stomach so much ice cream. The second biggest upgrade: Dacre Montgomery as Billy Hargrove, but to say anything more about Hawkins’ mulleted bad boy would be saying way too much. If we’re not talking about people, then the biggest upgrade of all belongs to the Starcourt Mall, a brand new shopping megaplex in the heart of Hawkins — a sprawling space that didn’t exist six months earlier. Take a tour for yourself:

Biggest pop culture influences: A few from which to choose, including Back to the Future, The Terminator and George Romero’s underrated Day of the Dead, as well as the always reliable Aliens reference here and there. There’s another major film reference that cannot be revealed due to the spoiler embargo, but suffice to say, it will be impossible to miss.

The final word: Before heading into season three, read THR TV critic Dan Fienberg’s review of what’s ahead, including the following takeaway: “Stranger Things is a show that absolutely knows its audience, and that leads me to wonder if casual viewers will be more generous to the evidence of familiarity and sluggishness that I experienced. I spent more than half the season thinking Stranger Things might be a show doomed by a refusal, in Coca-Cola terms, to break from its beloved recipe and then the last couple episodes thinking it was a season explicitly about that refusal, representing a turning of the corner.”

Some more final words: Boorish mating rituals. Muppet voices. The curious case of the “ancient chariot” and “wheelbarrow.” The Tod Father. Operation Child Endangerment. Cerebro. These are words that do not make much sense yet, but will surely come into focus after season three comes to light. Until then, we leave you with one question: “Are you ready to sweat?”

Listen to the Series Regular: Stranger Things 3 Primer podcast before beginning your binge: