Continue to The Hollywood Reporter SKIP AD
You will be redirected back to your article in seconds
Skip to main content
December 31, 2018 9:01pm
Logo text

Netflix’s first order of business for the new year involves another decade entirely: the 1980s, the era in which the supernatural Duffer Brothers drama Stranger Things is set.

In conjunction with the arrival of 2019, Netflix has announced a July 4 premiere date for season three of Stranger Things, once again starring the likes of Winona Ryder as Joyce Byers, David Harbour as police chief Jim Hopper, Finn Wolfhard as Mike Wheeler and Millie Bobby Brown as the powerful Eleven.

Netflix revealed the premiere date through a New Year’s Eve teaser, set in 1984 with seconds to go until the ball drops during Dick Clark’s New Year’s Rockin’ Eve special. As is the show’s custom, the video goes horribly awry with static, as well as a secret coded message that reads: “When blue and yellow meet in the west.” Who knows about what’s happening out west, but the teaser itself ends in a different direction entirely: upside down, appropriately enough.

Watch the teaser below.

Set in 1985, season three takes place several months following the events of the second season, in which the small town of Hawkins, Ind., was once again plunged into “The Upside Down,” the unofficial nickname given to the dark dimension where Demogorgons, Mind Flayers and other monsters dwell. New castmembers include Cary Elwes as slick politician Mayor Kline, Jake Busey as local reporter Bruce and Maya Hawke as Robin, joining Joe Keery’s Steve Harrington as an employee at the Starcourt Mall — a new development bound to serve as a central setting for season three. Priah Ferguson, one of the breakout stars from season two, will reprise her role as Erica Sinclair (sister to Caleb McLaughlin’s Lucas) in season three.

Netflix previously released a Stranger Things episode title teaser for its upcoming nine-episode third season, which includes provocative names such as “Suzie, Do You Copy?” and “The Case of the Missing Lifeguard.” Little is known about the plot beyond the new castmembers, the episode titles as well as the summer setting. Not only is Stranger Things returning in July 2019, the events of the series itself will unfold in the summer, based on the tagline in the new poster: “One summer can change everything.” The previous two seasons have both taken place in the fall, with scenes set during Halloween, Thanksgiving and Christmas. The summer setting for season three, as well as its July 4 release date, keeps the holiday tradition alive. 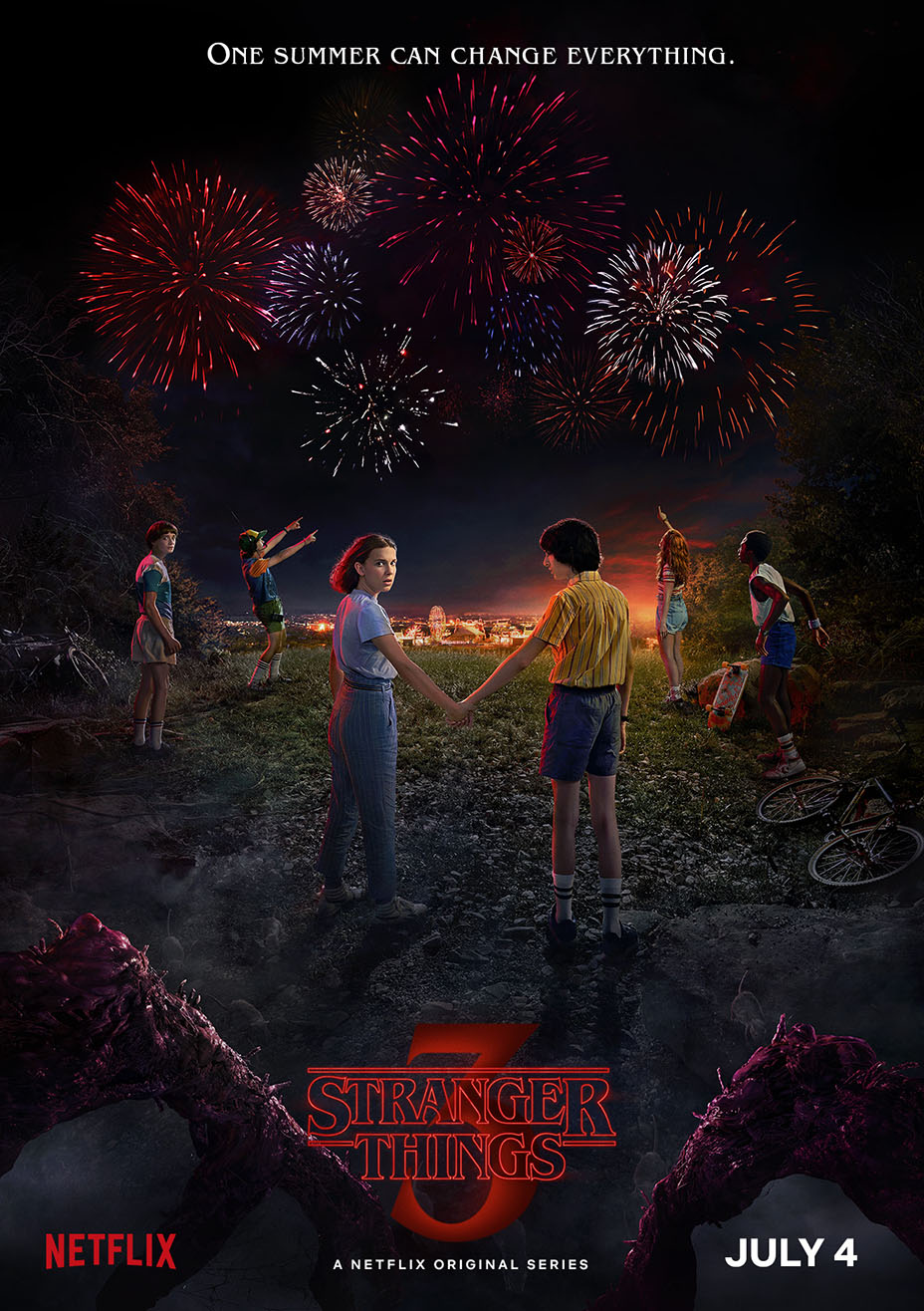 Stranger Things, which is returning more than a year following the second season’s October 2017 release, stands out as one of the most popular shows on Netflix, and one of the jewels in the streaming service’s crown, as it has become a lucrative branding business with licensing deals ranging from Funko collectibles, McFarlane Toys for action figures, Hybrid Apparel for clothing and more. As Netflix continues to emphasize the shows it owns over those it produces in collaboration with other studios (see: Netflix’s recent cancellations of its Marvel offerings), Stranger Things only increases in its importance as a brand — an increasing role that coincides with changes within the Stranger Things’ young cast, as Matt Duffer explained to The Hollywood Reporter shortly after season two’s release.

“Our kids are aging. We can only write and produce the show so fast,” he previously told THR. “What I like is that it makes you evolve the show. It forces the show to evolve and change, because the kids are changing. Even if we wanted it to be static and we wanted to continually recycle the same storyline — and we don’t — we would be unable to, just because the kids are changing. It’s cool, though. The audience is going to be able to watch these kids come of age every year. The closest example is Harry Potter. Watching those kids and actors grow up in front of the camera was, to me, very powerful. I mean, I wasn’t a kid when I experienced that, and I can only imagine if you were a kid and you were their age, it would have been even more powerful.”