For its third season, Netflix’s Stranger Things is adding an important new location into the mix: Starcourt Mall. But don’t expect to see much more of it for another year yet, as the Emmy-nominated drama is poised for a summer 2019 release.

The Starcourt Mall is front and center in a new teaser video (below) released by the streaming service Monday, showing off what stands to be a critical set piece for the forthcoming season three. Filmed and presented in nostalgic 1980s style, the Starcourt Mall commercial highlights several different storefronts and even reveals first looks at two characters: returning player Steve Harrington (Joe Keery) and newcomer Robin (Maya Hawke), both of whom work at an ice cream shop known as Scoops Ahoy.

“Ahoy!” they both exclaim near the end of the video, though neither one appears completely comfortable with their role in front of the camera.

What’s more, the video closes with three words: “Coming next summer!” It’s not only a nod to the season’s summer setting, but also an indication that Stranger Things itself won’t return until summer 2019. Though the events of the series have thus far taken place during the fall, Stranger Things initially debuted in July 2016.

Ahoy! Something is coming… to Hawkins, Indiana! pic.twitter.com/BI4wFRVzvB

Exiting season two, it was hard to know exactly what the future would hold for Steve, who is among the most recognizable breakout characters in the Duffer Brothers’ drama. Steve’s arc alongside Dustin (Gaten Matarazzo) was a highlight of the past year of Stranger Things, but given his place in the high school hierarchy, it felt like Steve would not easily make a return to the Hawkins area. Does his job at Scoops Ahoy mean he’s not going to leave town for college after all? Not necessarily. The new season takes place in the summer, for one thing, so viewers may find Steve right on the edge of leaving his hometown — but not before he’s finished with one final summer job.

What’s more, the prominence of Starcourt Mall should leave fans wondering what exactly Stranger Things has in store for season three, both with tone and in terms of its reference points. The show is no stranger to leaning on classic films as points of inspiration, and with that said, an iconic horror staple that immediately comes to mind when looking on Starcourt Mall is Dawn of the Dead, the George Romero classic that takes place almost entirely within a shopping center. Could Stranger Things voyage into its own version of zombie territory? And if so, will Steve’s steady supply of ice cream come in handy? Ice cream cones could be an underrated weapon in the zombie apocalypse, not to mention brain freeze…

As a final bit of intel, Netflix released an in-universe statement from Mayor Klines, played by Cary Elwes, addressing the development of Starcourt Mall. Read the full statement below. 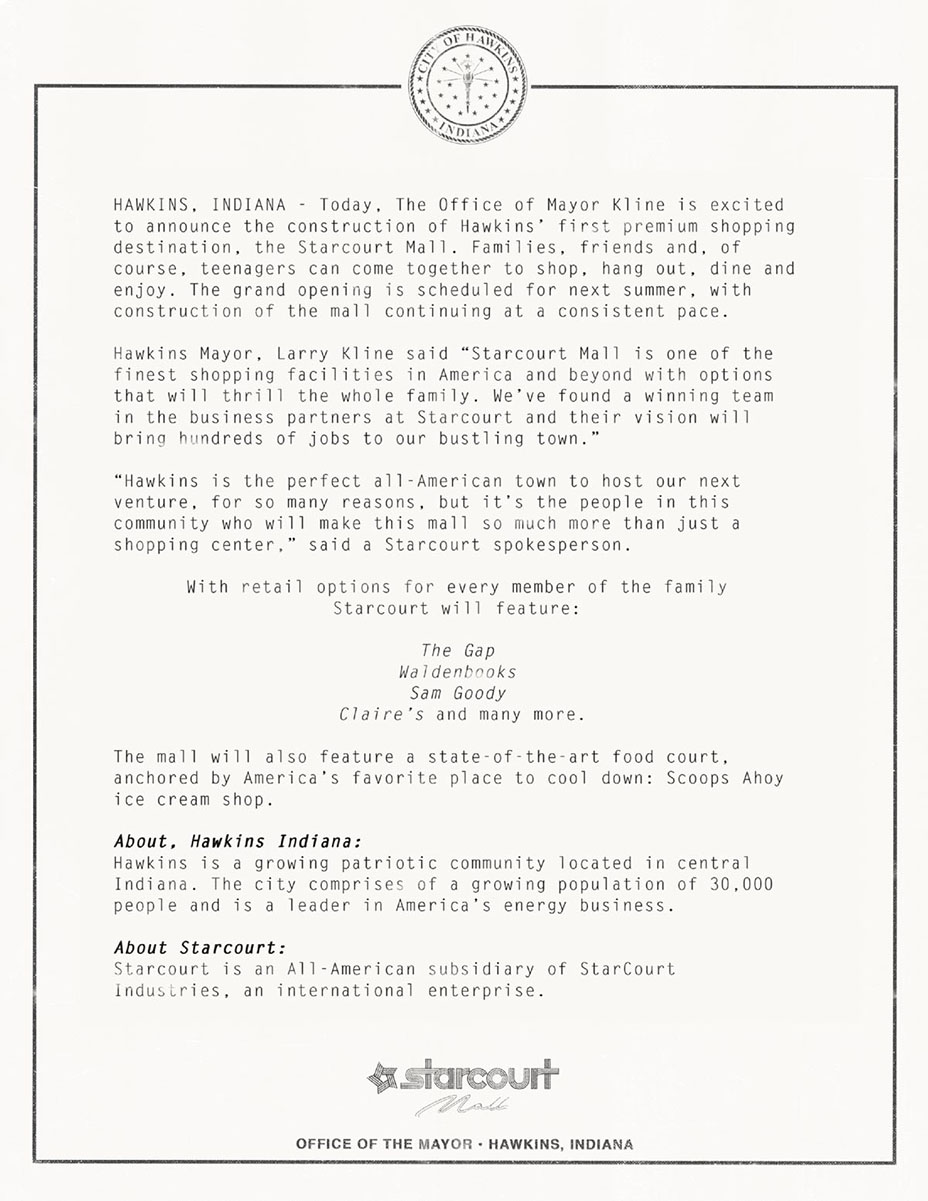