It’s been said many times that television is in a unique position to shape the perceptions of the people it portrays. With increased nationalism among political leaders and media personalities stirring up more suspicion than ever on immigrant populations, TV characters and storylines have been given heightened relevance and resonance.

“Historically, the way that media has portrayed marginalized communities has had a direct impact on how those communities were treated in wider society, from voting rights to criminalization of their mere presence in spaces,” says Noelle S. Lindsay Stewart, entertainment media manager for the nonprofit Define American. “With immigrants, everything seems to fall into two categories: the criminal hustling the system, or the high-achieving, pristinely perfect ‘good’ immigrant. That doesn’t allow for the complexity or humanity that real people have. We believe that by humanizing people on television, you cause audiences to be emotionally invested in characters, and then take that emotional investment and project them onto the people in their lives.”

To that end, Define American, the media and cultural organization founded by Pulitzer-winning journalist Jose Antonio Vargas, has partnered with USC Annenberg’s Norman Lear Center and The Hollywood Reporter for a new study that compares immigrants on scripted television and in real life.

Looking at 143 sample episodes from 47 series airing in 2017 and 2018, Immigration Nation: Exploring Immigrant Portrayals on Television found that immigrant characters are portrayed as less educated and more prone to criminality than they are in reality. Although the report cites recent studies by the CATO Institute and the Marshall Project as saying that the immigrant crime rate is lower than that of native-born Americans, more than a third (34 percent) of immigrants on TV are associated with crime, and 11 percent of immigrant characters are depicted as formerly or currently incarcerated or headed to jail, whereas in reality less than 1 percent of foreign-born people have been incarcerated at the state or federal level (excluding immigration-related offenses). 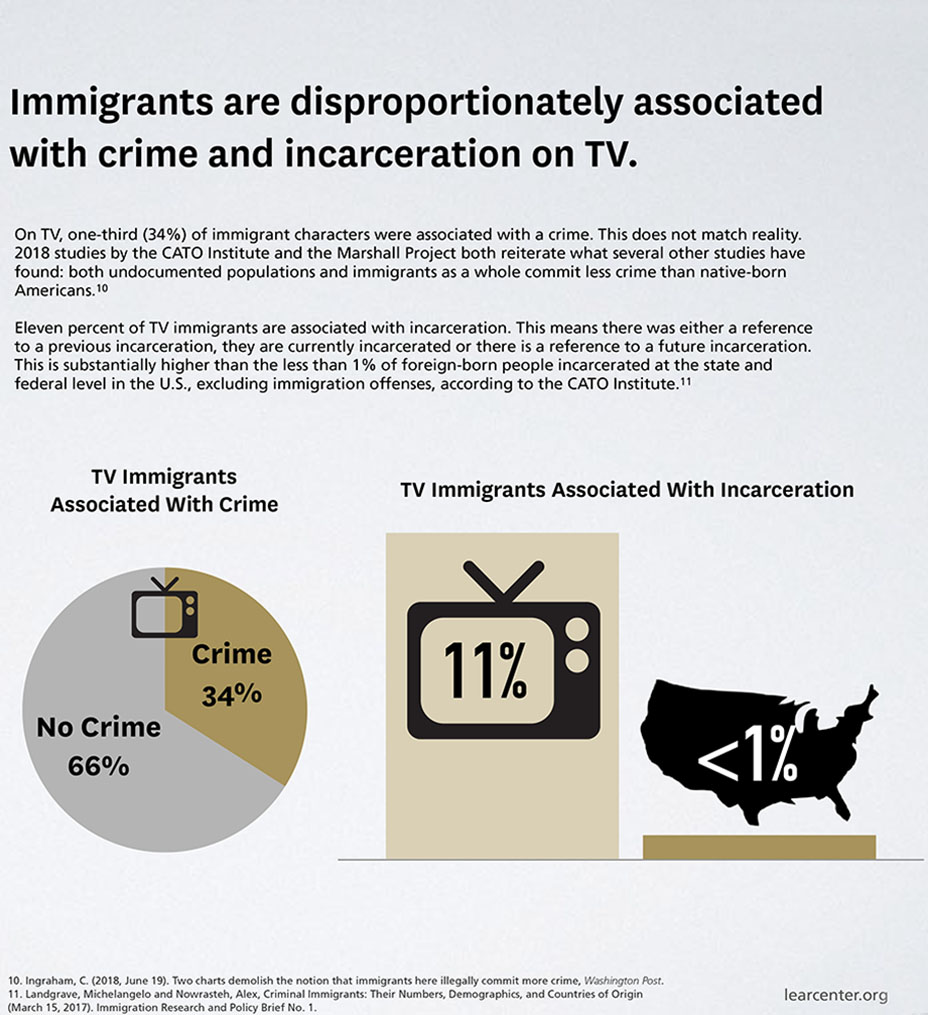 Immigrant storylines also tend to be about legal status, or the lack thereof: 41 percent of immigrant characters on TV are undocumented, whereas the Department of Homeland Security reported in 2018 that just under a quarter of U.S. immigrants are such. Nearly half (49 percent) of American immigrants are naturalized, but only 23 percent of foreign-born characters on television are depicted as citizens. The term “deportation” occurred in just over one-fifth (21 percent) of the episode sampling, followed by “ICE” (19 percent) and “undocumented” (16 percent).

“A lot of the criminal or legal issues are played up for drama and timeliness in our current news climate,” Stewart explains, “but we hope and want to see writers and showrunners move past [immigrant representation as] a news item or checking a box, and instead to create characters that are well-developed, deep and are more than their legal status.” 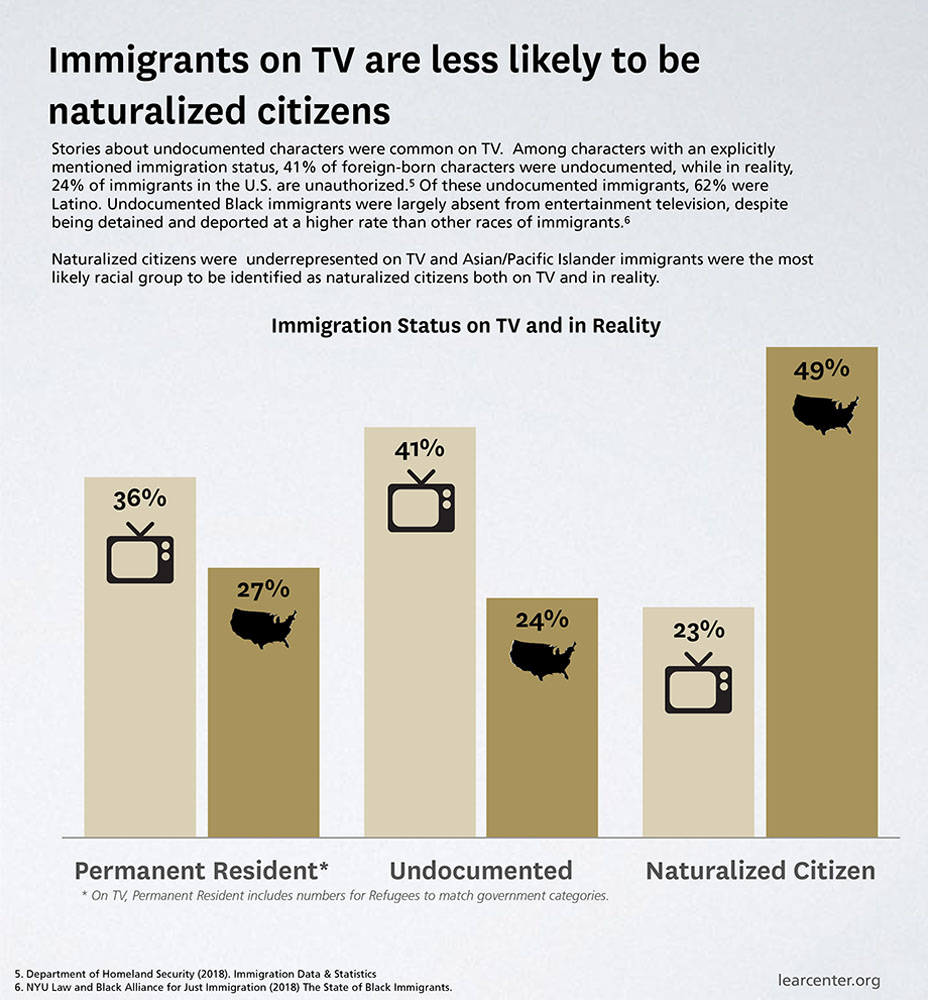 Immigrant characters are also less educated on television than they are in reality. Only 7 and 3 percent of them were shown to have received bachelor’s and master’s or PhD degrees, respectively, compared with 17 and 13 percent of the actual U.S. immigrant population. The vast majority (77 percent) of TV immigrants also tend to speak English with an accent. 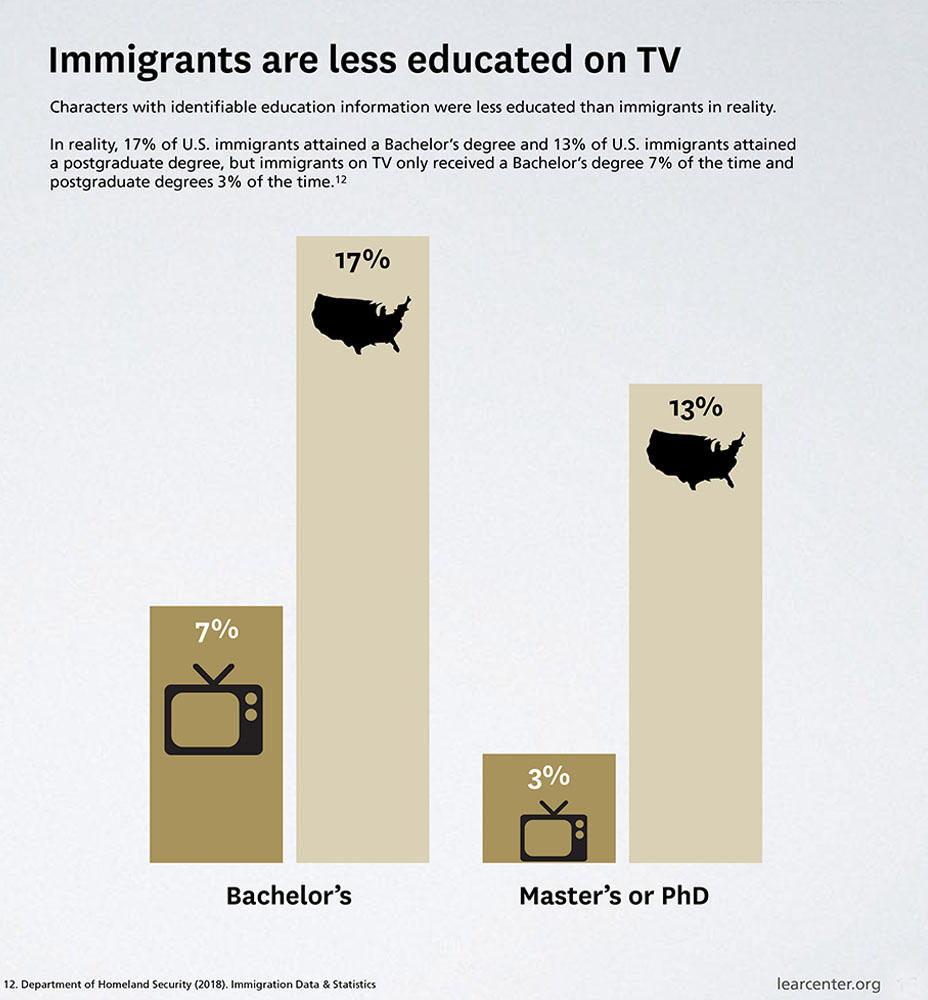 Define American consults with showrunners, writers and executives to help ensure that immigration-related storylines and characters are portrayed accurately and responsibly. In 2017 it consulted on more than 23 TV and film projects, including NBC’s Superstore, Hulu’s East Los High, and earlier this year consulted on an episode of ABC’s Grey’s Anatomy about a surgical intern who is a DACA recipient. The organization also released Immigrants and Immigration: A Guide for Entertainment Professionals last year. Another ideal solution is to hire immigrants in the writers’ room, says Jane the Virgin scribe Rafael Agustin, who penned a guest column on the subject for THR.

“The take-home lessons are to not be afraid to do the work and the research that it takes, whether that is hiring more writers with diverse perspectives or reaching out to consultants like Define American or the Muslim Public Affairs Council,” Stewart says. “We tend to write what we know, so if you are creating a character, learn from people who have actually lived those experiences.”