Supernatural star Jared Padalecki is “gutted” over not being approached to work on The Winchesters, The CW’s third attempt at a spinoff from its beloved and long-running demon-hunting drama.

“Dude. Happy for you. Wish I heard about this some way other than Twitter,” Padalecki wrote late Thursday on social media after seemingly learning for the first time that his former onscreen brother, Jensen Ackles, is spearheading development (and narrating) the prequel. “I’m excited to watch, but bummed that Sam Winchester had no involvement whatsoever.”

When a fan pressed the actor, who spent 15 seasons playing Sam opposite Ackles’ Dean Winchester, about whether he was joking, he clarified that he wasn’t. “No. It’s not. This is the first I’ve heard about it,” he replied.

'Supernatural' by the Numbers: A 15-Year Ratings History

Dude. Happy for you.
Wish I heard about this some way other than Twitter.
I’m excited to watch, but bummed that Sam Winchester had no involvement whatsoever. https://t.co/bAcEvFKM7p

In a since-deleted tweet, Padalecki directed part of his ire at Supernatural co-executive producer Robbie Thompson, who is slated to write the script for the spinoff, which is being produced and narrated by Ackles. “Et tu brute? Wow. What a truly awful thing you’ve done,” it read. “#Bravo you coward.” 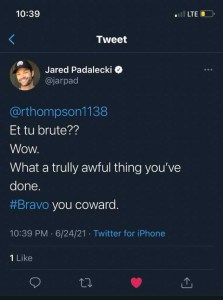 The Winchesters is The CW’s third attempt to launch a spinoff of Supernatural after two failed backdoor pilots. It revolves around John and Mary, the parents of Supernatural brothers and headliners Sam (Padalecki) and Dean (Ackles). The story will recount their love story and journey as monster hunters, with Dean serving as narrator. Jeffrey Dean Morgan and Samantha Smith played the characters of John and Mary Winchester, respectively, in the flagship series.

As The Hollywood Reporter noted Thursday, The CW CEO Mark Pedowitz attributed the show’s enduring success to the chemistry created by Padalecki and Ackles. Neither of the previous spinoffs involved Sam or Dean, and the two stars were not attached in any capacity. The Winchesters is an effort to bring the appeal of the original series to a spinoff a year after the flagship wrapped. (In a sign of just how important Supernatural was to The CW, production on the handful of remaining episodes that were derailed by the pandemic resumed as the network made sure the show had its proper ending. Such was not the case for most shows, which never resumed production, with their derailed episodes either scrapped entirely or folded into subsequent seasons. Fox’s Empire, it’s worth pointing out, never resumed production on its final season, and the show signed off without a proper conclusion.)

While Ackles, The CW and Supernatural producers Warner Bros. TV all seemingly failed to loop in Padalecki about plans for The Winchesters, series creator Eric Kripke — who recently cast Ackles in his Sony-produced Amazon series, The Boys, voiced support for the project and was briefed ahead of the announcement. While Kripke is not involved, as the creator of the original show he may very likely be entitled to financial compensation for its spinoff.

“When @JensenAckles first told me this story, I loved it. He & @DanneelHarris & @rthompson1138 are the perfect people to make it. (The other perfect person is too busy Texas Rangering.) Thanks for carrying the torch, guys, go kick it in the ass. Proud of you,” Kripke tweeted.

The announcement of the Winchesters spinoff comes after Supernatural aired its series finale last fall following a 15-year run. From Warner Bros. TV and the Ackles’ Chaos Machine Productions, the series is being developed by Ackles and his wife/producing partner Danneel Ackles. It’s the first project to stem from a rich overall deal Ackles inked with Supernatural producers Warner Bros. TV, extending his relationship with the studio behind the series after its conclusion.

It’s also worth noting that both Padalecki — who stars in The CW’s Walker — and Kripke are no longer employed at Warner Bros. TV, the studio behind Supernatural and The Winchesters. Walker — which has earned a speedy second-season renewal — is produced by The CW co-owner CBS Studios.

THR has reached out to The CW and Warner Bros. TV for comment and will update this post when and if there’s a response.

As for Padalecki, he returned to Twitter on Friday morning to encourage the sizable and vocal “SPN family” to reiterate his love for those involved with The Winchesters. “Hey world. Thank you for the love. Please PLEASE don’t send any hate or threats. I care deeply about everybody involved and would be in true misery if any of them were harmed or threatened,” he wrote. Hours later, Padalecki and Ackles tweeted that they had a “great talk” and seemed to have resolved whatever beef had been brewing.

Love you @jarpad …
Miss these talks. I forgot how much face time we always used to get. And I miss that too. I know you’re busy…as am I, but you’re still my brother. I miss you, pal. https://t.co/KtRKYkvc2K