History has its eyes on Sunday’s Super Bowl LV. Tom Brady, in his first outing with the Tampa Bay Buccaneers, is making a 10th appearance in the big game, this time taking on Patrick Mahomes and the Kansas City Chiefs who are trying to pull off the rarest of repeats as NFL champions.

Also watching closely will be a passionate contingent of Hollywood stars who will be rooting on red and gold. That’s not to say that Brady, following a record-setting run with the New England Patriots, and his team are without bold-faced name devotees but when it comes to this year’s celebrity cheering section, the Chiefs seem to dominate the Buccaneers.

Brad Pitt, Paul Rudd, Jason Sudeikis, Henry Cavill, David Koechner, Rob Riggle, Heidi Gardner, John Amos, Melissa Etheridge, Eric Stonestreet and others, are well-known Chiefs fans who even appear on the team’s official website. It’s likely a handful will pop up on the video screens from Tampa come Sunday afternoon while the majority will be screaming at the TV from home due to the COVID-19 pandemic which has put a damper on the festivities as well as the seating. Only about 22,000 seats inside Raymond James Stadium will be filled (capacity is normally up to 75,000), with 7,500 of those reserved for vaccinated health care workers.

Kansas City native Gardner would love to be in Florida but she’s due in New York for Saturday Night Live which films the night before with host Dan Levy. “It doesn’t make sense,” she says of risking the travel amid work and Super Bowl protocols. “I want to stay safe and respectful.” Meaning, she’ll stay home in the city and watch with a mini bubble consisting of her husband and longtime best friend, a fellow KC native who also loves the home team and will come with her dog outfitted in a Mahomes jersey. As for Gardner, she’ll be wearing her own Mahomes jersey underneath a pair of festive Chiefs overalls.

“Being a sports fan, you want to figure out how to show support to your team in any way you can. If I could go there and scream my guts out for them, I would do it,” says Gardner, who adds that her fandom dates back to age 7. “It makes me sad but I try to post a lot of love for the Chiefs and during the goodnights on SNL, I wear as much Chiefs gear just to put that love and good juju out there.” (Expect the same at the close of the Feb. 6 show.)

Gardner knows the matchup makes for the best kind of headline — Mahomes vs. Brady — in that it pits two of the league’s star quarterbacks. But she’s hopeful about her hometown team’s chances. “I never like to get too cocky because I’m superstitious and I want to be respectful, but obviously I want the Chiefs to win. Everyone says they want a good game but I want to feel comfortable, too, so I would love them to come out swinging and end the first quarter with a 75-point lead.”

As for her spread, Gardner says she’s scouting out some Kansas City barbeque to go along with some Mahomes-shaped cookies that have already been ordered. If that sounds sweet, how about this: Gardner says that a dream job would find her standing on the sidelines after the game is over to provide a soft shoulder to land for the losing team. “Tampa Bay is such an amazing team and there are so many great players that even though I want chiefs to win, I would love to be down there to hug them. There are not a lot of women out there at the end of the game and I know it’s not really COVID safe now, but I will hug any Bucs after the Chiefs beat them.” 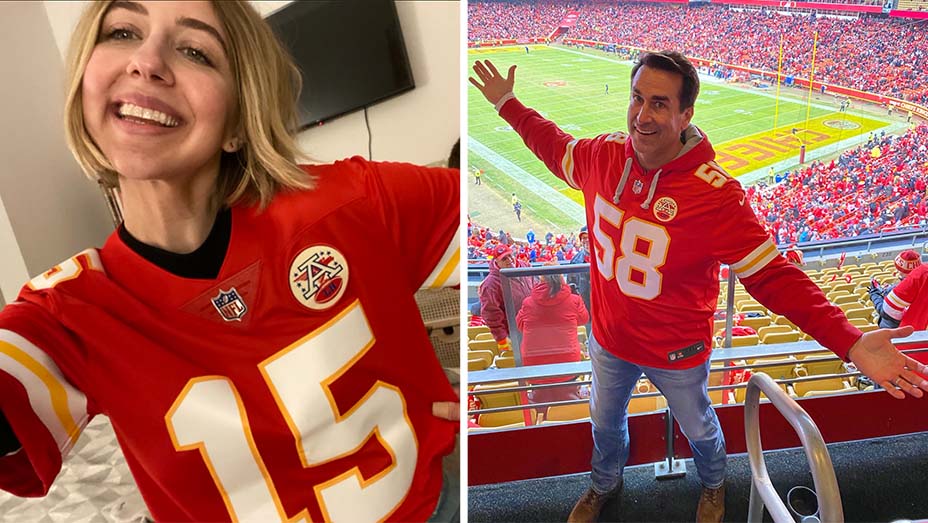 Veteran comedy star Rob Riggle, who hails from Kansas City suburb Overland Park, said watching his team soar over the past two seasons has been a dream come true. “I’ve thought about this for years — all through my youth to grade school, high school, college and even post-college in the Marines. I followed as they made the playoffs many, many times, fell short many, many times and broke my heart many, many times. I remember all the up seasons and the down seasons.”

He passed the Chiefs fever to his son and the two were in the stands during the epic 2019 division playoff game versus the Houston Texans when they reversed a 24-point deficit and wound up advancing on a roll that would eventually end with a Super Bowl championship in Miami. Riggle was there for that game, too. “It was unbelievably special,” he says.

As much as he’d also love to be in Tampa, the complications with the virus and ticket availability led him to a decision to stay home barring any last-minute decisions. Riggle says that while this year is obviously an anomaly when it comes to the fanfare, it doesn’t really dampen the mood. “It’s a game and they have to play the game,” he explains. “Whether they play it with an overflow of fans and a weeklong series of fanfare, at the end of the day, it comes down to what happens on the field.”

Selfishly, he laughs, Tampa Bay is the home team so he’s glad there won’t be a stadium filled to capacity with locals. “We need all the help we can get,” he continues. He’ll do his part by wearing his lucky shirt underneath a Chiefs jersey, cooking up Kansas City barbeque that’s now on ice in the freezer and “sending positive energy to all the Chiefs” from his lucky spot on the sofa.

Veteran actor John Amos (Good Times) is more than a lifelong Chiefs fan, he was on the team. In the late 1960s, Amos joined as a free agent under “one of the greatest coaches who ever lived,” Hank Stram. Though his tenure on the team was short, Amos named his son KC as a way of showing his appreciation. “It was a dream come true,” he says of wearing the uniform.

Though he’d like to be in Tampa to cheer them on — and see players like receiver Tyreek Hill up close (“In all the years I’ve been studying the game, I’ve never seen guys move so fast”) — Amos is going to watch from home in Colorado with a few pals. One of those friends, Willie, owns a nearby restaurant so they’ll be enjoying delicious food, complemented by some special sauce from Kansas City’s own Gates Barbeque. “The crowds and the intensity of the gathering would just increase the risk of something bad happening in terms of the virus or the aftermath of the virus,” warns Amos, who will still dress the part in an all-Chiefs ensemble (“top to bottom, hat to sweatshirt”).

“I’d be much more comfortable in knowing that I’m in control of the environment. I encourage all those who do go to the game or intend to see it in a large gathering, wear your mask, wash your hands, enjoy yourself, but have a good sense about it. It’s not worth endangering your health about. There’ll be other games and there’ll be other Chief championships too, I guarantee you that.”