Welcome to the Survivor: Heroes vs. Healers vs. Hustlers preseason! The Hollywood Reporter’s Josh Wigler reports from his exclusive visit to the show’s shooting location in Fiji, where he interviewed host Jeff Probst, as well as the 18 new castaways battling it out for the million dollar prize.

Click here to make sure you’re all caught up on our stories from the island, including our weekly podcast series First One Out, an in-depth look at all of the new players, culminating in an interview with the first person voted out of the season.

In playing Survivor, there are four words you never want to hear aimed in your direction: “The tribe has spoken.” But over the course of 39 days, virtually every player will weather these words from host Jeff Probst, as he snuffs their torch, extinguishes their quest for the million-dollar prize, and sends them down the dark jungle path away from the cruel temple known as Tribal Council.

For a series that relies on blindsides and unexpected plot twists, the weekly visit to Tribal Council stands out as one of the show’s few stable elements. With some notable exceptions, every episode of Survivor culminates in a trip to Tribal, where the players cast their votes to eliminate one of their own. Every season, the Survivor art department dreams up an expansive new Tribal Council set, typically inspired by the shooting location or the season’s theme.

'Survivor': The One-Stop Shop for All Things Season 35

In the case of season 35’s Tribal, the theme of Heroes vs Healers vs Hustlers wasn’t a driving force behind the art design (sadly, you won’t find any hidden stethoscopes on set), with art director Dax Pointon and his team instead looking deeper into Fijian history for inspiration. Read on for my conversation with Pointon about the season’s art design, complete with photos of the new Tribal set.

Explore the new Tribal Council set, and other moments from Survivor history, in the penultimate episode of our preseason podcast series, “First One Out.”

We’re in Fiji! Beautiful Fiji. It’s amazing here. It’s probably the best backdrop for Survivor that you can imagine. The clearest water, the most angry storms, the thickest jungle. It’s all here. It’s incredible. It’s a real test of a true Survivor out here.

Tell me about this Tribal Council set. Every year, so much thought goes into the art design of Tribal Council, and Survivor in general…

This Tribal Council, we decided to go back in time a little. We’ve been a little bit contemporary before, but this time, we went back a little bit through Fijian history and into a shipping trade theme — almost a spice trade and East India trade aesthetic. There was a pretty big trade industry between Fiji, India and therefore England. We played upon that a fair bit. Between about 1860 through 1910 or something like that, it was a big deal. There was a sugar industry being traded between there, that would end up in England. It was a perfect backdrop to play upon an Art Nouveau kind of aesthetic, a little bit of a warehouse kind of feel. Ship parts and items and things like that. That’s why it looks like we’re in a jungle setting where we’re in a warehouse filled with sacks and crates. It’s overgrown with vines. It’s like something you would stumble upon if you really were shipwrecked somewhere, and you walked up this beach and here’s this crazy place with train tracks. 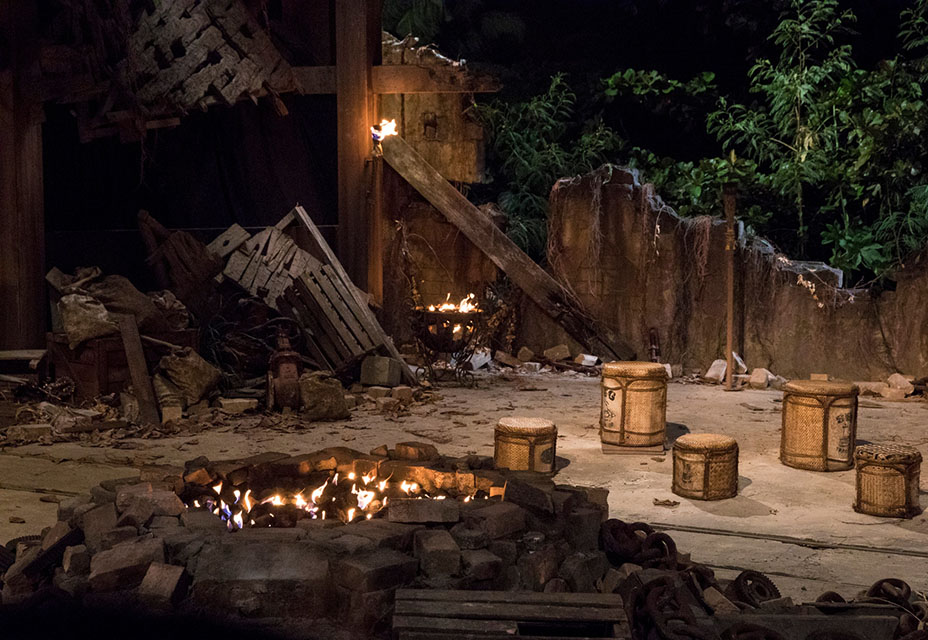 Can you explain the train tracks to me? Which we’re standing on right now…

These are actual sugar industry train tracks, too. We sourced these from a disused factory, close to the mainland. They had to get these carts to go out into the fields with these little train carriages, that are also on set here, and fill them up with people who would cut the cane and push these carts back to where a little train would come. We incorporated them into the set, to give that feel of produce coming in and trains here covered in boxes and bags. It’s a perfect walk-in and walk-out situation.

How much research goes into this?

We spent quite a long time looking into this. Some of the iconography and motifs we wanted have a bit of an Indian flair to it, with a Fiji backdrop. We really had to find out what part of those things came here. What kind of era it was. What other things were going on at that time. What ships were happening, what sort of industry, just to make it as authentic as we could. There’s a fair bit that goes into it. We’re prepping months in advance. This was already thought of last year.

Last year? While you were already here in Fiji?

That’s how far in advance you have to plan out?

Yeah, well, when you look at this set, it obviously takes a long time to do. There’s almost two months worth of build here. Before that, there are plans to be built, and people to gather, and we have to do our research to see if we can even source some of these things we want to get. Because we’re very remote here. We can’t just go down to the local place and buy whatever we want. There’s no Home Depot here. Where are you getting your material sent from? It’s too far from anywhere. We need to make sure we have the local guys to build it and the materials to build it and all of that sort of stuff. We were lucky we were here. We had a little bit of preparation from before. But we have to do the research, otherwise it doesn’t get done in time. 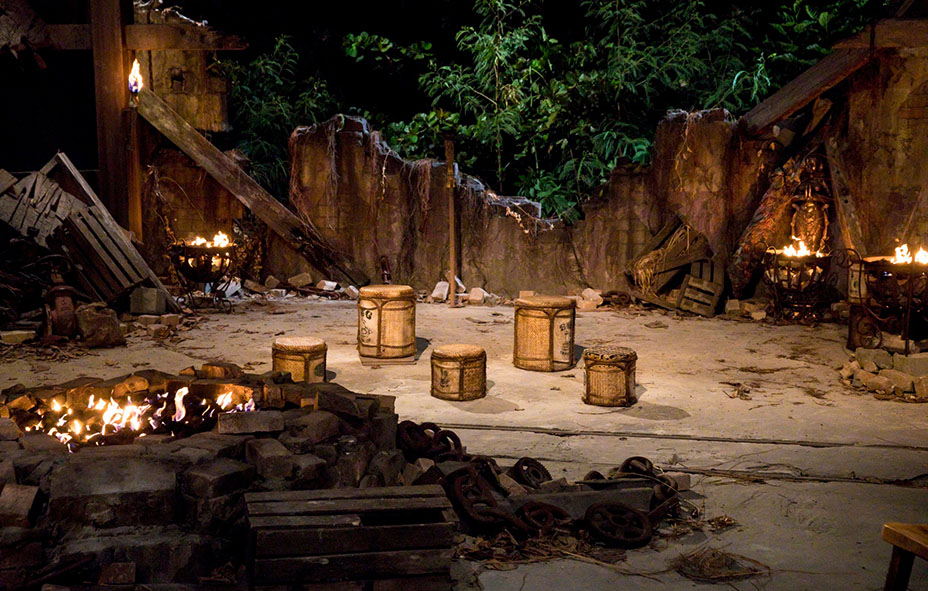 Why is authenticity so important? You can imagine the scenario where there’s the Disney Worldification of it…

I mean, we do a little bit of that, but that’s just to fill in the blanks. We have contestants here who are living a dream. We have to suspend the disbelief so they believe what’s happening is happening. The biggest kick we get is when they walk into Tribal Council and their mouths drop open and they’re looking around and they’re going, “Wow. Look at this place.” If it’s as real as possible, that’s why we go that extra effort. We don’t want them to look at the train track and kick it and it’s wood and painted. We want them to feel the rust on it. We want them to feel that the vines around them are real. It makes a difference. It’s why they live out on the beach. Living out on the beach, it’s real. That’s why the show is so great. They believe in what’s happening to them.

Outside of Tribal Council, how does the season’s design aesthetic apply to everything else — the idols and challenges, for instance?

The immunity idols are based around that same Indian aesthetic. A little bit of the culture has crept into India, just through this whole sharing of cultures. We borrowed a bit of Indian iconography, a statue, and we melded it with a Fijian touch. It’s actually carrying a clamshell from the ocean. We kind of tried to put those two together and shake them up a bit and see what came out. That’s why it’s the nice brass statue, even though it’s more primitive than it would normally be. Even the challenges, this first one has carts on train tracks. These things aren’t always coincidence. We think about these things. Even in a challenge, we try to incorporate as much culture as we can. It’s fun for us, but I think it’s fun for the viewer, and it’s fun for the contestant. They’re here in Fiji. They like to see those little touches. It’s way worth it. 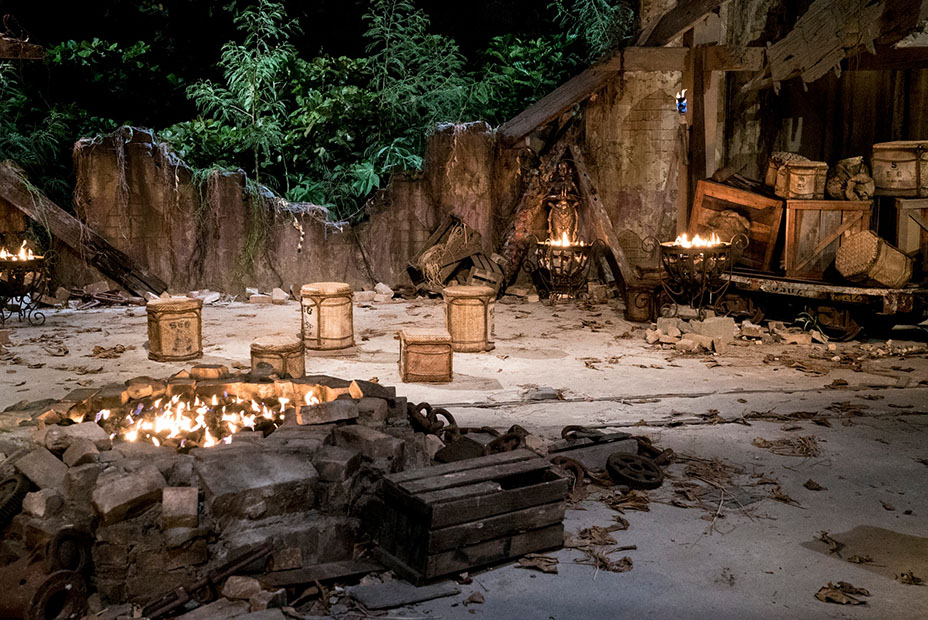 Keep checking THR.com/Survivor for more coverage of the Heroes vs Healers vs Hustlers preseason.