Boston Rob Mariano and Sandra Diaz-Twine guard the way to Boston Rob Mariano and Sandra Diaz-Twine. It’s an odd sentence, sure, but far less surreal than the reality: on the Island of the Idols in the middle of Fiji’s Mamanuca Islands chain, there’s a beach with two gigantic statues standing on either side of the jungle’s open mouth — statues that are the spitting images of Rob and Sandra, two of the most legendary Survivor winners in the CBS reality series’ history, with a combined 211 days between them (117 from Rob, 94 from Sandra), as well as three Sole Survivor titles. Sandra is only too happy to remind you which of the two owns the additional crown.

In Survivor: Island of the Idols, the 39th edition of the landmark reality franchise, Boston Rob and Sandra are back to add 39 more days to their tally, though they have no shot at another title — unless you want to add “coach,” “mentor,” “idol” and “veritable Survivor god” to their expansive list, Daenerys Targaryen style. (Too soon?) The former Survivor champions are the central components of the fall-debuting season’s twist, in which 20 new castaways will slug it out for the million-dollar prize, all while accumulating opportunities to glean practical and strategic survival skills from Rob and Sandra. Think of it like Ghost Island, except instead of a bunch of cursed relics and haunted bamboo, players are dealing with two walking, talking, taunting Survivor legends. Bookmark our Survivor page for everything to know about the new players as soon as we can reveal more.

For now, how about a close-up on Rob and Sandra themselves? THR visited the Fiji filming location of Island of the Idols in March, spotting the two Survivor winners in the wild on their second day out in the bush. Make no mistake: the two-time queen and the Redemption Island conqueror are both roughing it out in the jungle this season, even if they aren’t competing in the game. On this particular morning, after spending a hot and muggy first evening in an uncomfortable corner of the island, Rob and Sandra are hard at work cleaning out a new area where they plan to build the most expansive shelter in Survivor history. (The new location is a bit further afield from the massive statues built in their likeness, which might be a good thing; the sight is as surreal to Rob and Sandra as it will be to any of their upcoming guests.) Their ambitions are as big as the multi-tiered structure they hope to build, but they have all the time in the world and none of the stress of getting voted out to see it through. Then again, they do have some other snakes and rats to worry about — especially snakes.

Ahead, enjoy a slice of life from Rob and Sandra’s first full morning on Survivor: Island of the Idols, in which they describe why they signed onto the season, what they hope to accomplish in their new roles as mentors, their hopes for their sprawling shelter, what it’s like to share a beach together for the first time since Survivor: Heroes vs. Villains aired almost ten years and 20 seasons ago, and more.

Welcome back to Survivor. What are you doing out here?

Sandra Diaz-Twine: I only came because Rob was coming.

Boston Rob Mariano: I always said I wouldn’t come back to Survivor unless it was some kind of unique experience that made sense. When Jeff pitched us the idea of us coming back as coaches or mentors, it rang true. I said, “Why not?”

Did you find out about each other coming out before you came out here?

Boston Rob: Yeah, I knew Sandra was going to be out here.

Sandra: Jeff told me he was talking to Rob, but Rob had not made a decision yet. I was waiting to see what he was going to do.

And so you called Rob to tell him, “What are you thinking? Let’s do this!”

Sandra: No, it wasn’t like that. We actually met for the first time in LA when we did the 3-D [modeling for the Island of the Idols’ Rob and Sandra statues].

Boston Rob: They told us they were making totems of us. I didn’t realize it was going to be a 25-foot statue.

It must be a giant ego boost, walking out here and seeing a giant bust of yourselves.

Sandra: Rob said, “Sandra, you know you’ve made it when you have a totem on Survivor.”

Sandra: If you don’t have a totem yet? You still have to put in work.

How was the first day for you two?

Sandra: It was good!

Boston Rob: It was good. We fell right back into it.

Boston Rob: The camp-life stuff that we’re used to doing was easy. Sleeping on the bamboo after ten years? Not so easy. But we’ll get used to it. We know how to do things now. We’re going to move our camp over here. We started building our camp [closer to the beach]. It’s not going to work out. Just this morning, we found a better place. We have big plans. We’re going to build two decks. We’re clearing the space right now.

Sandra: We want more air. At night, we don’t have any air [down by the beach]. It’s hot, sweaty and muggy. You toss and you turn. Here, you have a breeze. We’re going to have a second level with a star-gazing net where you can sleep and gaze up at the stars. Seriously!

Boston Rob: We’ve been working on different ideas for things. We’re going to make the best shelter they’ve ever had on this show. We have 39 days, and they can’t vote us out. We have a lot of time out here.

'Survivor: Edge of Extinction': The First One Out (Finally) Speaks

What’s your idea for how the shelter will look when all is said and done?

Boston Rob: Multiple levels. Star-gazing net. It’s going to have a trap-door with a ladder going up to the second floor. There’s going to be a wraparound deck with the porch. It’s your basic Survivor shelter.

Sandra: And a rope-bed. We don’t want no more bamboo.

Do you have a timeline? When’s the rope-bed going to be ready?

Sandra: It’s going to be one of the first things, right?

Boston Rob: Yeah, within the first week. I was thinking of building a rope-swing, too, to go with the bed.

Sandra: Will you swing me?

Boston Rob: We’re talking about ziplines, too. I don’t know. Might be tough.

You’re going to put your visitors to work on this project, right? Free labor and all.

Boston Rob: The main premise is they’re coming over here. It’s called the Island of the Idols. Think of it like a Survivor boot camp or training camp, where they can come over and they can learn any kind of skill that they need. Any lesson, they can come and learn it over here. We can do anything, you know? We’ve been here over 200 days between the two of us. We can make a fire like that. We can teach them how to fish. We have everything that they would need to learn how to do any skill that it takes to survive out here.

Sandra: And we’re planning on counting these 39 days [in our total].

We’re looking at this as the fourth and fifth time out for you, right?

Boston Rob: That’s the thing. We’re walking the walk. We’re talking the talk, but we’re out here doing it. It’s not like we’re going back to a hotel.

Was that important for you, in your decision to come out here?

Boston Rob: I just want the experience, you know? Which is kind of sick, but I like it!

Sandra: You miss it after so many years. When I got voted off of [Survivor: Game Changers], I was like, “I’m never going to do this shit again.” But here I am. 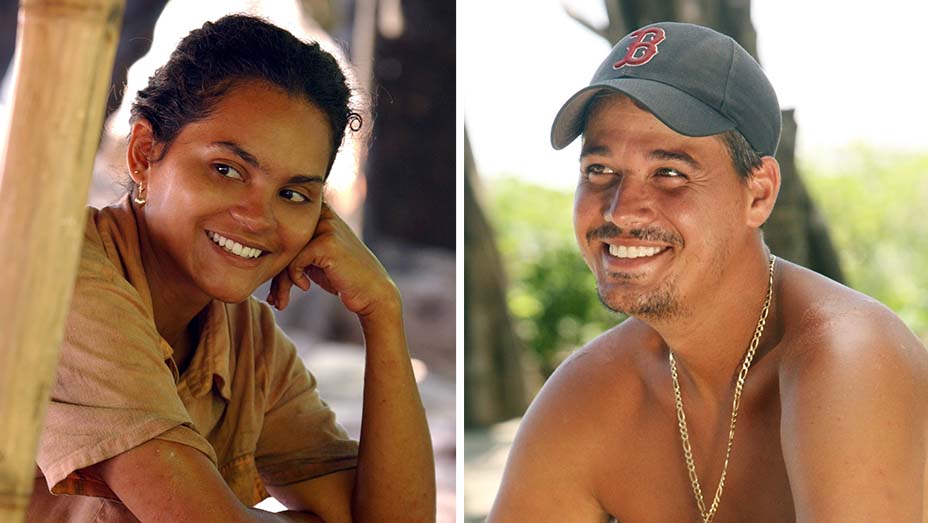 Sandra: We have four chickens. We have coconuts. We have a papaya tree. Rob caught a fish yesterday.

Boston Rob: We killed a snake yesterday. There was a six-foot sea snake.

Sandra: I wanted to eat it. I didn’t know it was poisonous. I found out it’s poisonous.

Boston Rob: It’s the only snake in the world there’s no anti-venom for.

Can you hang it up on your shelter like a decorative trophy?

Boston Rob: No. I hate snakes.

Sandra: We had to bury it. It was after our chickens.

Was there a funeral?

Boston Rob: There was. (Laughs.)

Sandra: We buried him out on the beach. He has a plot.

Was there a eulogy?

Sandra: No, but we said, “It was either you or the chickens. We chose the chickens. So sorry we came onto your island and it had to be you.” Rob dug a hole with the shovel, stuck it in there, filled it up and put a stone and a stick.

Are you envisioning an expansive graveyard? How many more dead sea snakes?

Sandra: Rob doesn’t like snakes. He couldn’t sleep all night [after that]. That’s why we’re moving.

Boston Rob: Off to higher ground!

With the boot camp, what’s something you’re hoping to teach these new players in the next 39 days?

Boston Rob: I think the lessons will progress as the days go by. At the beginning, it might be basic. We’re going to teach you how to learn to catch a fish. I’ll teach you how to start a fire. But by day 30 or 35, they might come to us with strategy questions and game theory and numbers, and we can help them with that. But we’re not going to talk about that in the beginning. It’s not going to help them in the beginning. The lessons we teach will, number one, depend on the person who comes and what they need. Number two, it’ll depend on where we are in the game.

How are you going to do with each other out here? You have a whole lot of time and nothing but each other for company.

Boston Rob: I’m fine with Sandra! I have no issues. We get along good. I get her sense of humor and her sarcasm, and she gets mine.

Sandra: I give him space when he needs it. We live in the snug, but we’re not snuggling.

Sandra: He stays on his, I stay on mine.

This interview has been edited and condensed. Additional reporting by Mike Bloom.

Follow THR.com/Survivor for more coverage, and check back later this year for the return of our preseason podcast series First One Out.