[This story contains spoilers for the Dec. 12 episode of CBS’ Survivor: David vs. Goliath, “Are You Feeling Lucky?”]

Eighteen. That’s the number of votes cast against robot scientist Christian Hubicki across his Survivor career, which ended tragically this week in the season’s penultimate episode, thanks to another number: three, the amount of votes he received in his final Tribal Council. He was ousted by former David tribe ally Nick Wilson and the Goliath tribe’s Kara Kay and Angelina Keeley.

The decisive breakout character of David vs. Goliath and the odds-on favorite from this cast to return for a future season, Christian’s swan song was a relatively quiet affair, given the size of his personality featured onscreen all year long. Through most of the hour, the action centered on a simmering feud between Nick and his fellow former David, the aptly named Davie Rickenbacker, both of whom were packing heat in the form of hidden immunity idols.

For his part, Davie was angling to take out Nick, fearing the increasingly large target on his own back. For Nick, the idea to aim votes at Davie didn’t even pop on the radar until he learned about Davie’s developing plan. At Tribal Council, both men played their idols (Davie’s was useless beyond this round of voting, due to a power-up twist straight out of the Survivor: Ghost Island playbook), leaving Christian exposed and ultimately defeated.

The three votes were more than enough to take Christian out even without the idols in play, as the good professor and Davie cast their votes for Alison Raybould, while Alison and Mike White cast their votes for Davie. In the end, Nick received zero votes, meaning he played his idol needlessly; it’s a potentially massive self-inflicted injury as David vs. Goliath heads into the end game.

“It surprises me that people thought I was such a huge threat that I needed to go as soon as they could marshal the votes,” Christian said in his final words. “Eighteen votes, if I can count. That’s an accomplishment! It makes me feel big, it makes me feel formidable, like a person who has earned the respect of his colleagues. Maybe I should respect myself more as a consequence.”

'Survivor David vs Goliath': The Secret Origin of That Emotional Elimination

In a recent interview with The Hollywood Reporter, executive producer and host Jeff Probst weighed in on what it was like to meet Christian for the first time, describing him as “an instant” yes: “It didn’t take more than three minutes. And the number one reason was because of his storytelling abilities. He is able to hook you very fast, even when talking about something as mundane as what he ate for breakfast. And he always has a fascinating entry point into stories, as he rarely comes at them head-on. He usually tilts his head when telling a story, and that’s an indication that what follows will also be slightly … tilted. And at this point, we knew we were doing David vs. Goliath, so that made it an easy decision.” 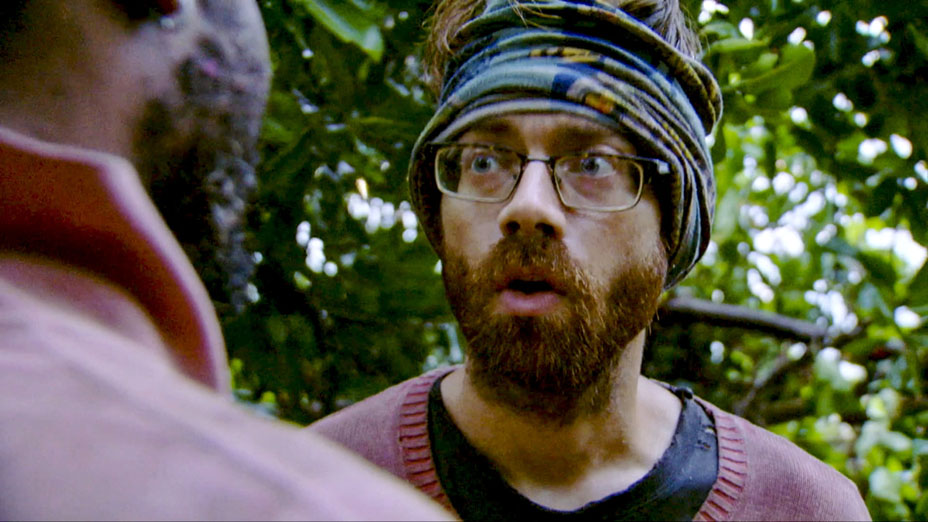 Christian’s highlight reel across the season is vast: solving the very first challenge within seconds due to a history of creating slide puzzle algorithms, becoming a card-carrying member of the “Brochachos,” his life-saving idol play (even if it only spared his fate for a single round) and, of course, his legendary head-to-head immunity win against Alec Merlino.

“There’s a ton on the edit-bay floor,” executive producer Matt Van Wagenen recently said about that challenge. “Christian rambled on about exoskeleton research, sex robots, the psychological concept of a second wind, his favorite seasons, how Jeff was hired by Mark Burnett, and there was a moment where he impersonated a stripper and yelled, ‘These hips don’t lie!’ Seriously.”

As the recently eliminated Gabby Pascuzzi told THR earlier this season about her ally-turned-rival: “Christian is verbose.” It’s an understatement, and one that Christian himself would certainly own, based on how he described his Tribal Council strategy earlier in the season.

“I would try to answer questions with grand-sounding statements about the philosophy of Survivor strategy,” said Christian, speaking with THR after the second episode of the season. “I felt this was a good way to keep Jeff from interrogating me into giving up specific information about the vote. So for most of Tribal Council, I’m trying to work out these little speeches in my head, so I can deploy them when the time comes.”

Among his many Tribal tirades, Christian’s first remains his most memorable: “There often isn’t exhilaration without risk. A lot of times, that sense when you’re transcendently in the moment … it’s not something as terrifying as Tribal Council. It could be a roller coaster. If you, in your deepest part of your mind, knew that that roller coaster was safe, would you really be as excited? Or is it because you’re convinced in this moment that you’re falling, and you’re going to die, that makes it very exciting?”

With Christian officially launched from the ride, only six players remain in contention for the million-dollar prize: Nick, Davie, Angelina, Alison, Kara and Mike. Who will walk away from the most elemental Survivor season in recent memory with the grand prize and Sole Survivor title? The answers are just around the bend — but for his part, Van Wagenen’s tease of what to expect is very much of the Hubickian mold: “Christian’s prophecy continues. It’s an absolute roller coaster.”