Continue to The Hollywood Reporter SKIP AD
You will be redirected back to your article in seconds
Skip to main content
September 5, 2018 9:00am
Logo text

It’s March 29, 2018. Twenty men and women stand on a boat in the middle of the Fijian sea, separated into two tribes with familiar names: David and Goliath. Jeff Probst, veteran Survivor executive producer and host, stands before them all, welcoming them to the next 39 days of their lives.

“What complicates Survivor is the unknown,” Probst tells them. “You have no idea what to expect, what skill set will come in handy, and anything about the other players. The question isn’t who has the advantage — it’s what is the advantage?”

With that, Probst announces the theme for the 37th iteration of the landmark CBS reality series: “This is Survivor: David vs. Goliath,” he intones, as a banner with the season’s name unfurls behind the wannabe millionaires.

What happens next: a spirited debate between the David tribe (10 people who are “used to proving people wrong and defying expectations,” according to Probst) and the Goliath tribe (who Probst describes as having one thing in common: “winning”), and a riveting challenge that immediately tests the season’s theme. The Hollywood Reporter was on hand for all of it, interviewing the 20 new castaways in the days leading up to the game, as well as speaking with Probst a few hours following the initial events of the season.

Here’s everything to know ahead of the Sept.26 premiere of Survivor: David vs. Goliath. 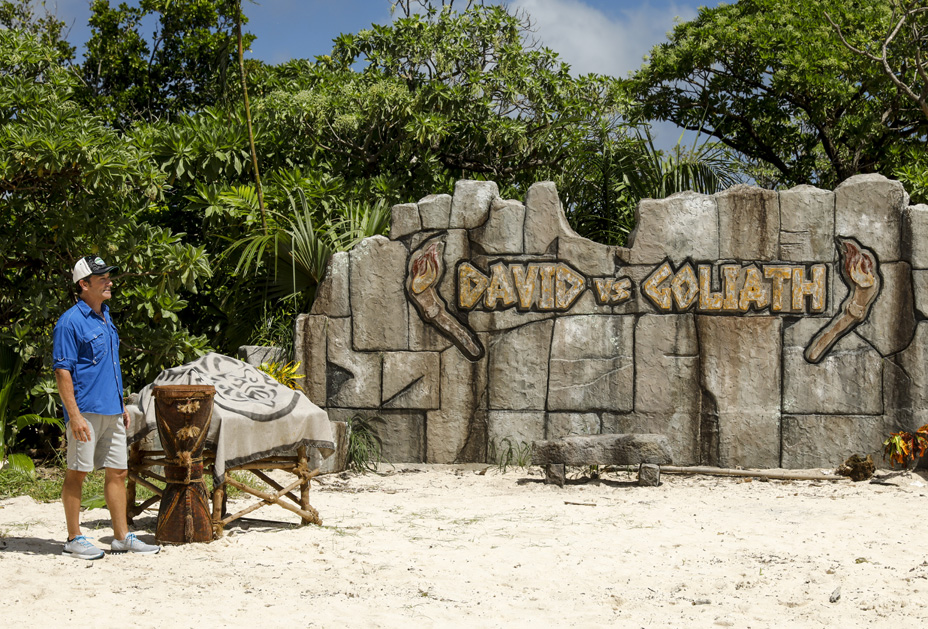 The Underdog vs. the Favorite

According to Probst, the David vs. Goliath theme owes its origin to a book with a very similar name: Malcolm Gladwell’s David and Goliath: Underdogs, Misfits and the Art of Battling Giants.

“He talks about the idea that in life, it’s not always about who has the advantage, but what is the advantage,” says Probst. “Survivor is a game in which every single day, you have to ask yourself, ‘What’s the advantage right now?’ Not who has it. What is it?”

Additionally, Probst credits the late mathematician John Nash as another inspiration behind the season’s theme: “[His] idea on game theory was, you as a player have to make your best move under the assumption that every other player is making their best move. It doesn’t mean they will, but the only way to play a really high level game is to assume if I’m playing against you, your best move is this, so I’m going to make this move to counter it. If I’m right, I’ll win.”

“That’s what’s happening on Survivor right now,” he continues. “Another player may have an idol, but that doesn’t mean they have the advantage right now. The advantage could be not having an idol. Now I’m not a threat. Every day, you have to think about how you want to handle it, which is why sometimes you see people win an advantage and say, ‘I don’t want it right now.’ They’re trying to figure out what’s their best move.”

The idea for David vs. Goliath was percolating in Probst and his team’s minds for several years, but only came to the forefront when the casting process for season 37 began.

“We’ve had it in our hopper, but it never felt unique enough, because it’s kind of what we do all the time in some ways,” he says, “until this guy Pat [Cusack, member of the David tribe] walked in. He’s from upstate New York, has had a heck of a life, started out in the hole with a mother who was paralyzed and a dad who wasn’t around, living paycheck to paycheck. He had never been on a plane. In fact, when he flew out for casting and they told him the flight was going to land at 3, he checked his watch and said, ‘It’s 3. Why are still in the air?’ They told him, ‘Well, there’s a time change, sir.’ That guy, to me, when we met him, I left and thought, ‘We need to base a season around that guy. What is that guy?'”

“Over the course of a few months, it became clear,” Probst continues. “That’s the David. That’s a David we can get behind. It’s not [former Survivor champion John Cochran], who’s a David who went to Harvard. This is a true David. That’s why he’s on this show and this season.”

From there, Probst and his fellow producers modified the casting process to search for people they could divide into one of two camps.

“We started meeting people and realizing, ‘Wow, people are either a David or a Goliath.’ There are very few people who are both,” he says. “To further it, we changed our psych profiling to look for that quality. As everyone would leave, the producers and I would say, ‘He seems like a David.’ We would talk to our psychology team, and they would say, ‘David.’ You could see that this is how they see themselves, while these Goliaths see themselves this way. What we realized in the process is that all of these people work hard and accomplish things, but how they see the world defines how they see themselves.”

The result of the casting search: 10 Davids, 10 Goliaths, for a total of 20 competitors Probst thoroughly believes in heading into the season: “I’m saying on the record, I thought Ghost Island was fantastic … this group, so far, is every bit as a good. When we have great people, we tend to have a great season. We can do all the creative we want, but if the people aren’t interesting, nobody cares. I think we have another great group of people.” 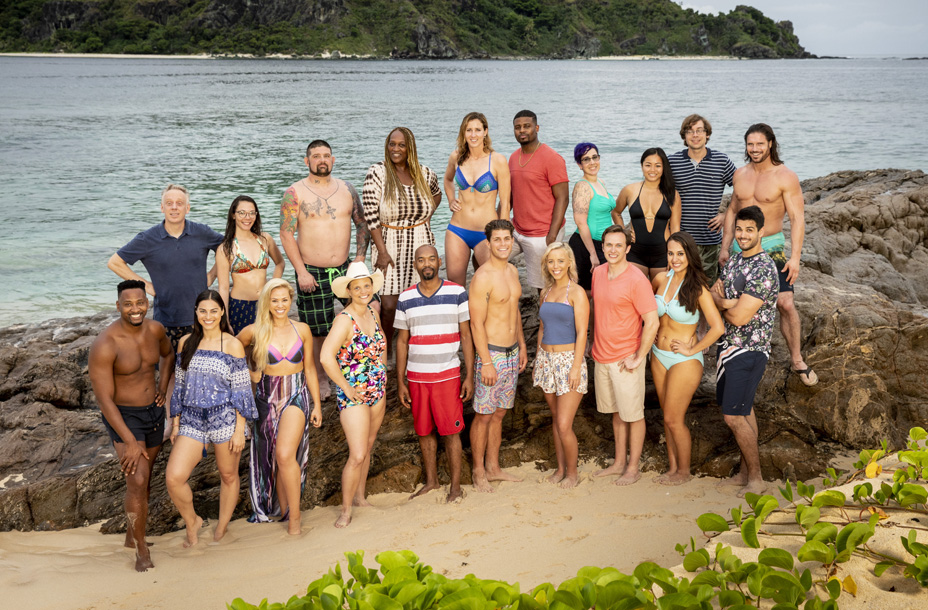 More on the people themselves down below, but first, a couple of notes on the creative. For the first time in several seasons, the season’s first few moments contain nothing in the way of secret advantages hidden at the marooning. Instead, the season begins with a competition that puts the David vs. Goliath theme to the test.

It begins with the Goliath tribe, who are tasked with picking the two people they perceive to be the weakest members of the David tribe. Next, the Goliaths must elect two of their own players as their strongest champions. The power then shifts to the two selected Davids, who are given the task of mapping out a three-staged obstacle course, containing physically and mentally grueling components alike. Each stage has multiple paths for completion, and not only do the Davids get to pick their own path, they also get to design the path the Goliaths must take. The winner of the challenge earns a shelter-building kit, a huge survival advantage to launch into the game.

Put another way: Goliath picks the gladiators, while David chooses the weapons.

“We wanted to come up with challenge elements that would capture all the different qualities you might need on Survivor,” says Probst, giving full credit to producer John Kirhoffer (who has been with the show since the first season) and his challenge department for coming up with the elaborate opening battle. “I think it’s the biggest task they ever had, maybe since [Survivor: Worlds Apart]. They pulled it off. What you end up with is this battle for who will do a better job of getting advantage on their side.”

“What is the advantage?” It’s the philosophical question driving the season’s theme, yes, but it also has a literal answer, as season 37 will introduce a new advantage into the Survivor system: the idol nullifier, an item with the power to negate a hidden immunity idol.

“You have to play it when you vote,” Probst says about how the nullifier is used. “The situation would be, someone is at camp with an idol nullifier. They think you have an idol, or they know you have an idol, and they think you’re going to play it tonight. They’re trying to get you to play it. They have the nullifier. When they go up to vote, they have a decision to make. If they decide to play it, in private, where no one can see them, they’ll say: ‘I’m playing this idol nullifier against Josh playing his idol.’ They write your name down, and drop it in the urn. It comes time to read the votes, and you stand up and play your idol. You dance around, super proud, and you bring it over to me. I’ll say: ‘This is a hidden immunity idol …’ And then I’ll reach into the urn: ‘And this is an idol nullifier. Any votes cast against Josh will count.'”

“The first time we play it, it will be a big twist,” he continues, “and it’ll be anonymous. Nobody will know who played it, except for the player who had it and whoever they told. If you don’t stand up and you don’t play your idol, then I never show the idol nullifier, and the person who played it blew it.”

As Probst mentions, the idol nullifier is played in secret, at the time of voting. In order to preserve that secret, the season’s Tribal Council set has been built to hide the voting booth from players sitting and waiting to cast their votes — meaning, they have no line of sight on anyone who may or may not be using the idol nullifier.

“Imagine two or three seasons [from now], we’ve now added another layer of gamesmanship,” he adds. “Are you going to try to psyche me out with the idol nullifier? Are you trying to get me to play it? We’re just looking to add other layers. One of the things people say to us is, ‘You have to be careful not to have too many twists. You have to be careful about having too many advantages.’ For sure. We get that. We just don’t think we’re there yet. We think it’s fun. It makes episodes more fun. When people say, ‘What about a season with no advantage?’ I don’t think you’re thinking that through. I think it would get kind of boring.”

In addition to weathering a new gameplay element, this season’s Survivor players will have to weather the literal weather.

It’s part of the Survivor bargain: the starvation, the thirst, the barebones island lifestyle, the blistering heat, the occasional downpour. But for the first few days of production on David vs. Goliath, the downpours weren’t an occasional matter; they were ever-present, as rain ravaged Fiji over the course of THR‘s visit, becoming an essential part of the soundtrack for “First One Out,” our preseason podcast series.

Listen to the first episode of “First One Out” in the player below:

“These storms are spectacular with their force,” says Probst, though he adds a silver lining to how the elements impact shooting conditions: “Even when the rain is coming down so hard you can’t see, it is beautiful. It’s a different kind of beauty, but it’s part of what you want on Survivor: that torrential downpour, the cats-and-dogs rain that people talk about. We’ve had it in the past out here, and all signs point to the fact that we may have it again this season.”

As for the 20 players set to battle the elements, not to mention each other? Without further ado, a quick overview … 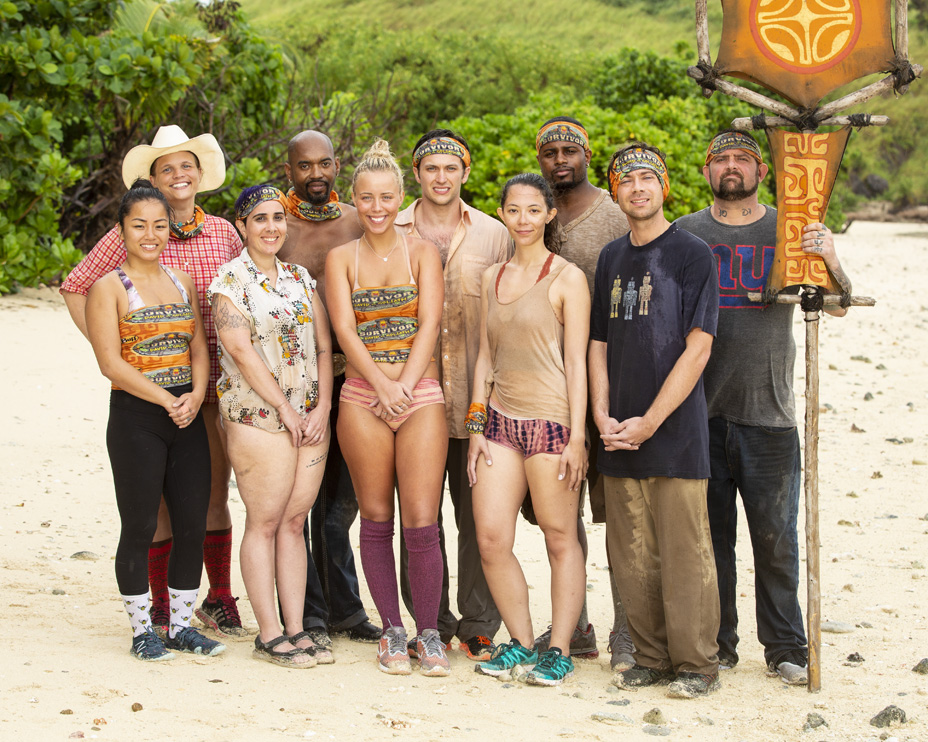 • Elizabeth Olson, who works as kitchen staff in Longview, Texas 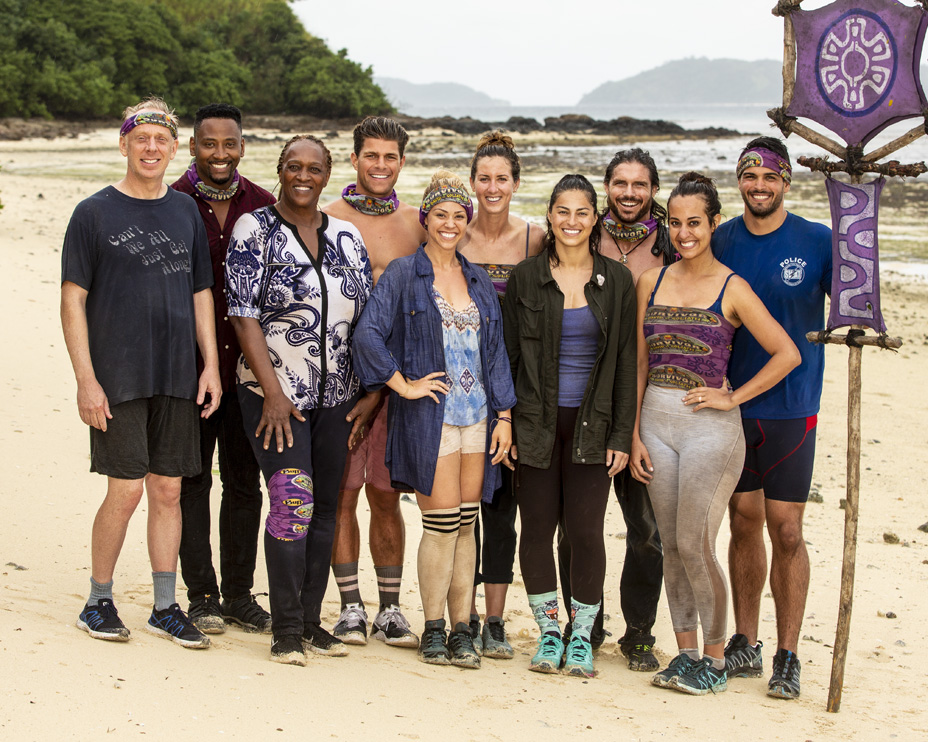 What do you make of Survivor: David vs. Goliath and its opening twists thus far? Sound off in the comments below, and keep checking THR.com/Survivor for more coverage.