[This story contains spoilers for episode four of CBS’ Survivor: David vs Goliath, “Time to Bring About the Charmpocalypse.”]

Survivor: David vs. Goliath underwent a radical shift in its fourth week, with two players exiting the game, a new advantage arriving on the scene, alongside a slew of dramatically altered tribe dynamics. Let the games begin, as they say.

In “Time to Bring About the Charmpocalypse,” a comically-sized and apt title for an episode filled with so much action, the David and Goliath tribes were shattered into three new groups — but only after one of the players called it quits: Bi Nguyen, the MMA fighter who injured her knee over the course of last week’s immunity challenge. Viewing the injury as a threat to her career, Bi made the choice to drop out of the game, becoming the season’s fourth casualty, and the second person to leave due to medical reasons, following Pat Cusack’s evacuation in the season premiere.

'Survivor David vs. Goliath': The Inside Story of That Shocking Season Premiere

With one player down, three new tribes emerged:

On the outside of all three tribes: truck driver Carl Boudreaux, banished to Exile Island, with nothing and no one as companions except for the pink shirt on his back, the cowboy hat on his head, and the promise that he will become the newest member of whichever tribe votes someone out next. Upon landing on Exile Island’s beach, however, Carl found himself on the hunt for a new advantage in the game: the idol nullifier, making its Survivor debut in season 37. The nullifier can negate the power of an immunity idol; for more on how it works, read our exclusive interview with host Jeff Probst.

'Survivor: David vs. Goliath': Jeff Probst Reveals Everything to Know About Season 37

Beyond Carl’s adventure in exile, all three tribes experienced their own measure of drama. At Jabeni, prolific alliance-builder and nicknamer Nick forged a partnership with Mike White known as “The Rock Stars,” while Natalie Cole continued grating on her tribe mates’ nerves. At Tiva, the Goliaths welcomed Christian with open arms, while Gabby tearfully fretted over her place in the tribe, only to score some major points with the group once she led the charge on a decisive immunity challenge win.

Following Tiva’s victory and Jabeni’s second-place finish, the cursed orange buff-wearing Vuku tribe found themselves on a collision course with the third Tribal Council of the season. What should have been an open-and-shut case on paper wound up becoming significantly more complicated after both Davie and Elizabeth successfully whispered in Alec’s ear, convincing the California surfer to betray and blindside longtime ally Natalia. She becomes the fifth person eliminated this season, the second player from Goliath off the board.

'Survivor' Castaway's Nightmare Becomes Reality in "I Am Goliath Strong"

Speaking with The Hollywood Reporter days before the game began, two of the players who voted out Natalia signaled their mistrust toward the industrial engineer, based purely on first impressions and nonverbal interactions. Here’s how Davie described Natalia: “I can’t get a read on her at all. She always has her game face on. She’s not smiling at anyone. There’s something up with her.” As for Alec: “She gives me a villain vibe, just based on what I’ve seen. It’s the serious face. It’s the occasional eye roll.” Alec turning against Natalia also flies in the face of how last week’s eliminated player, Jeremy Crawford, described Alec and Natalia’s businesslike bond, ala “Mr. & Mrs. Smith.”

For her part, Natalia, booted from the season due to the way her bossiness bothered Alec, more or less called the shot on her own demise as well. In her preseason conversation with THR, she said, “People who are closest with me are really curious to see how I’ll be on this island, because I’m going to be stripped down, and the annoyingness in me is going to come out: bossing people around and getting annoyed and yelling at people. I like to delegate. I like to be in control. It’s in me to be very aggressive. The way I talk to people is very forward. I like to be confrontational. For people who are more sensitive, that can be overbearing. That’s my biggest struggle going into this game.”

With Bi gone and Natalia falling shortly thereafter, Carl joins the Vuku tribe, tipping the group’s numbers in the favor of the former Davids, with the added benefit of an idol nullifier in his pocket.

“This shit ain’t gonna be easy,” Carl told THR in the preseason about his Survivor philosophy. With a new advantage in his possession and numbers currently on his side, the trucker-turned-castaway may be in for some surprisingly smooth sailing for the time being — with the exception of the torrential Fiji weather, which looks ready to rear its stormy head in the episode ahead. 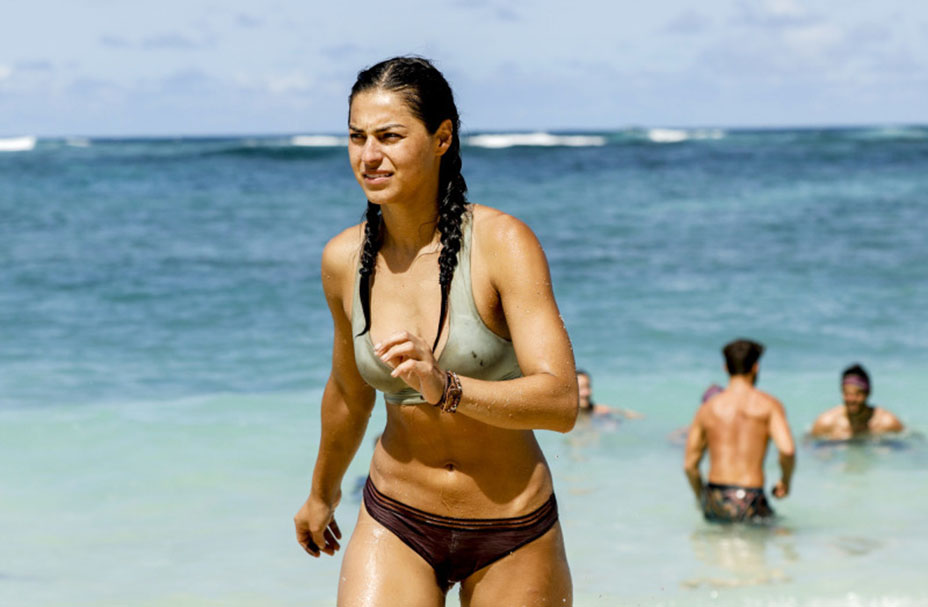 For more on the events of “Time to Bring About the Charmpocalypse,” The Hollywood Reporter spoke with Natalia Azoqa the morning after the episode aired. Here’s Natalia’s take on how her final Tribal Council played out, why she feels she lost Alec, the dramatic feud between Jeremy Crawford and Angelina Keeley, and more.

Why were you voted out, from your perspective? As much as you’ve been able to understand, what do you think it was that led to your downfall?

Natalia Azoqa: As you can see on the show, I speak my mind and I have a hard time controlling my emotions. From the beginning of the game I had built a close bond between Kara and Angelina and I knew I could act myself around them. I could really tell them how I was feeling and be as dramatic as I wanted without fearing that they would turn on me because of my tone or attitude. You see this when I tell Angelina in the shelter that I still wanted Natalie gone regardless of her decision. Now, Alec and I obviously had a bond and it was clear the girls (Kara, Angelina, and I) were trying to work with Dan, John, and Alec to hold the majority in our tribe. I had never talked strategy with Alec. I was mainly trying to build a tight bond with him to gain his trust. Since I never really showed Alec what was really going on in my head, he had never seen that analytical side of me come out and the strength in my tone when I am communicating. I think this scared him as he witnessed it for the first time.

The show led us to believe you and Alec were very close, so his betrayal was a big shock for us. Can you talk a bit about your relationship with Alec from the Goliath days? What changed once you swapped over to orange?

Natalia: Alec and I were close on the Goliath tribe on a personal level. I don’t think Alec trusted me enough to talk strategy and I did not feel comfortable telling him my thoughts on people if I didn’t have his trust. I can’t tell you how many times I tried to break the wall and talk about the game with him, but it never really worked. He was closed off. At the end of the day, he helped me get my head out of the game on the Goliath tribe. Having to suddenly talk strategy with him when we swapped was definitely a struggle and I did not know how to communicate my thoughts to him without scaring him away.

The show laid out Goliath’s power alliance as you, Angelina, Kara, Alec, John and Dan, with the others on the outside… was that how you viewed the situation as well?

Natalia: I would say that the six of us was a goal that Kara, Angelina and I had, and it really never became anything real because we swapped so early on. There was a definite alliance between Kara, Angelina, and me.

What was it like to share a beach with Natalie “Napalm” Cole? As the show paints the picture, it was a pretty tense dynamic between you two… what’s your side of the story?

Natalia: I would like to say that it’s a good thing and a bad thing that you have me talking about Natalie in the majority of my confessionals. I think that it’s a bad representation of the game I played, and the viewers don’t get to see how much I was communicating with everyone else on the tribe. I tried to work the room and basically build very fun and happy connections with everyone. I am actually sad it wasn’t the same for Natalie. Now, I do think that the confessionals are a very true representation of my personality when I am not being happy and fun. There is a very feisty and sassy side to me and I think it’s hilarious to watch. I had a good laugh watching myself be the mean girl. It doesn’t define who I am, but I have to be real and admit that it is a part of me that comes out when I don’t like you.

Can you weigh in at all on why Jeremy was voted out? Certainly, you’ve heard his perspective on things by now… any myth-busting or clarification you can provide would be appreciated!

Natalia: I think that questions involving what transpired between Jeremy and Angelina need to be asked directly to them. I will say that I voted Jeremy off that night because Angelina was in my core alliance and I had to show her with my vote that she had my trust moving forward in the game.

Final question… how mad was your twin sister that she didn’t make it to the family visit?

Natalia: This is a funny question and I did mention that it was my sister that would be my loved ones visit, but it was actually my younger sister, Katrina, and not my twin sister, Sasha. Katrina still holds a grudge to this day. When I get invited back, which will happen, I will do everything I can to get her to Fiji.