[This story contains spoilers for week three of CBS’ Survivor: Edge of Extinction.]

The war between rookie Survivors and returning castaways Joe Anglim, Aubry Bracco, David Wright and Kelley Wentworth heated up in the third week of Edge of Extinction, with fatal blowback for one of the newcomers.

Although the episode ended in the blindside of challenge beast Chris Underwood (who closed the deal for his tribe during the reward challenge, Manu’s first and so far only win on the board), veteran player Wentworth stood in the spotlight for the majority of the hour, with a bright neon target on her back. Among the Survivors with their sites on Wentworth: the ill-fated Chris, devoted anti-Wentworth crusader Wendy Diaz, news anchor Rick Devens and even David — the only other returnee on the tribe.

In what world would it make sense for David to target Wentworth, given the small number of veteran players against the greater sea of newbies? The crusade might not make sense to all armchair Survivor analysts on the surface, but in David’s defense, it flows from his thinking heading into the season.

“I’ve been trying to bone up on my Kelley Wentworth [history] to figure out what angles I have there, and there aren’t many,” David told The Hollywood Reporter in the preseason, speaking roughly 48 hours before landing on Manu beach. The Millennials vs. Gen X fourth-place finisher went on to say that before he shipped out to Fiji, he studied a previous interview with Wentworth, guessing she would be part of the season 38 cast. He walked away with the impression that she wasn’t his biggest fan.

“It makes me think, ‘Does she maybe not like me?'” he wondered. “But that’s okay. She doesn’t have to like me. I like her, and I’m hoping that I can make a pitch to her: ‘Look. We’re returnees. There’s going to be huge targets on our back from the newbies perspective. We can be shields for each other. Let’s go as far as we can. I got your back if you got mine.’ And right now, I actually would be fine sitting at the end with her. I’m not so sure she wants me there, just based on her lack of enthusiasm for me in that interview, but yeah, right now I would be okay with that.”

Whatever happened between David and Wentworth when they first landed on the beach, it clearly didn’t go the way he hoped. Based on the events of the episode, it appears she only survived the night thanks to the last minute audible to go after Chris, with Wentworth seemingly unaware of David’s original plan to send her packing. With a tribe swap on the horizon, David’s intentions of targeting Wentworth may take a seat on the back-burner for another vote or two — assuming they survive whatever is coming next. 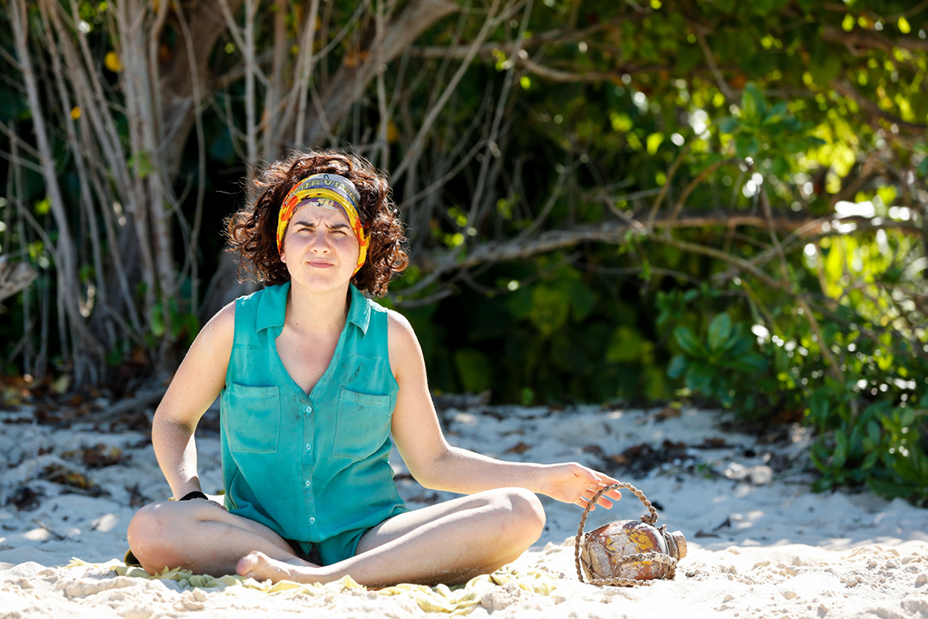 For instance, if David and Wentworth swap onto a tribe that’s filled with rookies from Kama, neither one of them are likely to be long for the game.

As with Manu, the Kama storyline has thus far centered on an alliance of new players turning against the veteran players. It’s bad news for both Joe and Aubry, despite the assets they bring to the table. In fact, Joe even overhears the plan to vote out the returnees, accidentally eavesdropping on a conversation between renown educator (and former movie subject) Rob Clark and waitress Victoria Baamonde.

Without numbers on her side and with danger in the air, Aubry strikes out for a different plan: finding a hidden immunity idol. Like a hunter on the Oregon trail, she returns from the quest with pelt in hand, becoming the second woman this season to find a hidden idol, and the third female Survivor player in a row to pull off the feat, thanks to Angelina Kelley’s discovery in the Survivor: David vs. Goliath finale.

“I’ve done nearly everything in Survivor except win and find a hidden immunity idol,” Aubry says during an emotional confessional surrounding her idol find. “I know how hard it is to win, and I am here to win, but first, I need to check one more thing off my Survivor checklist. I want every experience on Survivor, and that’s one I haven’t had.”

“I never thought I’d find one,” she adds. “I’ve been through so much in Survivor and this is something I haven’t gotten yet. It’s worth the effort to work through the struggle. I love this game so much, and I’m going to make it work for me.”

Also working in Aubry’s favor: She and Joe are not at odds in the same way as David’s secret desire to vote out Wentworth. Bad news there: The tribes are about to split up for the first time all season, based on previews for the coming episode. If Aubry and Joe stick together through a swap, or manage to link up with one or both of David and Wentworth when the two tribes split into three groups of five, perhaps all four of them will find their fortunes rising in the face of the rookie player crusade — or perhaps the returning player war will continue to escalate.

As for Chris, the third person voted out of the game? His war is just beginning. Much more on him, and the rest of the castaways, in the next edition of our retrospective interview series. Before then, go ahead and catch up on our looks back at Reem and Keith, the latter of whom wound up on the Edge of Extinction after all, putting an end to a weeklong cliffhanger.

Listen to Chris Underwood’s preseason interview with The Hollywood Reporter below: