Survivor launches into the unknown on February 20 with Edge of Extinction, the 38th season of the CBS reality series, built on the back of a controversial premise. This time out, when players are voted out, they are presented with an opportunity to continue surviving in a desolate location called Extinction Island, where they will have very little in the way of shelter and supplies, and only the vaguest notion of somehow, some day, fighting their way back into the million dollar game.

Given its provocative title, some television viewers may come across the new season of Survivor and expect something completely different. After all, with a name like “Edge of Extinction,” some higher concepts come to mind. Is it the subtitle of a forgotten Transformers sequel? The promise of a smoke monster, or perhaps a collision with some dinosaurs?

As it turns out, there’s some truth to the dinosaur theory, at least as far as the season’s aesthetic. Executive producer and host Jeff Probst stops short of crediting the new season’s theme to any specific pop culture theme parks, but when it comes to his end of the deal, Survivor art department guru Dax Pointon happily cops to a wink and nod at that Jurassic world.

'Survivor: Edge of Extinction': Everything to Know About Season 38

During his tenure with Survivor, Pointon has built countless Tribal Councils, including the sprawling builds featured in the live Los Angeles finales, not to mention the haunting Ghost Island featured in season 36. For Edge of Extinction, Pointon and his team once again faced a massive challenge in designing not only Tribal Council, but the aforementioned Extinction Island. Let’s set the record straight: there are no Tyrannosaurus Rexes lurking in the jungle, waiting to snack on terrified lawyers. But the design elements are in place to encourage the players, Extinction Island’s inhabitants in particular, to envision a world where strange, long since deceased beasts once roamed.

Read on for more from Pointon about how dinosaurs inspired the Extinction Island and Tribal Council aesthetics, plus photos from both locations. 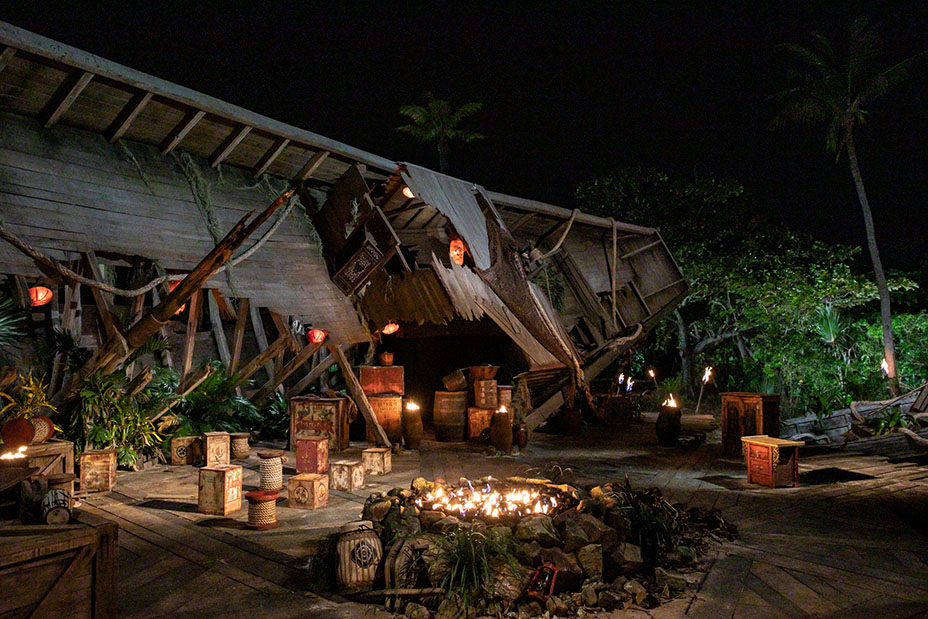 When you hear the words “Edge of Extinction,” where does your mind wander in terms of creating the design? Dinosaurs?

Well, a little, actually. (Laughs.) You may laugh about that, but there’s some seriousness to that. With Edge of Extinction, we thought a lot about bones and large dinosaur sized animals. My mind ended up going toward a wrecked ship, with the ribs exposed, because all of the planking off the hull has been ripped off. It’s a little bit of a stretch, but the metaphor is there. It looks like a beached whale, from the helicopter shots. That’s where I started. A ship’s ribs sticking up out of the sand gives a vibe of prehistoric extinction.

Tribal Council centers on this beached whale of a ship, as you say…

Really? It’s not repurposed from local shipwrecks, which you’ve done in the past?

No. We repurposed ships [for Survivor: Game Changers], but this time, we thought the only way we could make this convincing — especially with the idea of the exposed ribs of a beached whale — was to have all the structure there. So, we essentially built a ship. Not as well as shipbuilders would build it! (Laughs.) But still, it’s convincing enough, with all the right materials… and then we proceeded to smash it up, roll it on its side, and create areas to hide the cameras as we need, and to create backgrounds for contestants [during Tribal Council]. We have cargo that’s “fallen out,” and is now all over the floor, and it becomes stools for the contestants. We have it now as background dressing, too. This theme always lends itself well to Survivor, doesn’t it? It’s all about being shipwrecked. It’s a good one. 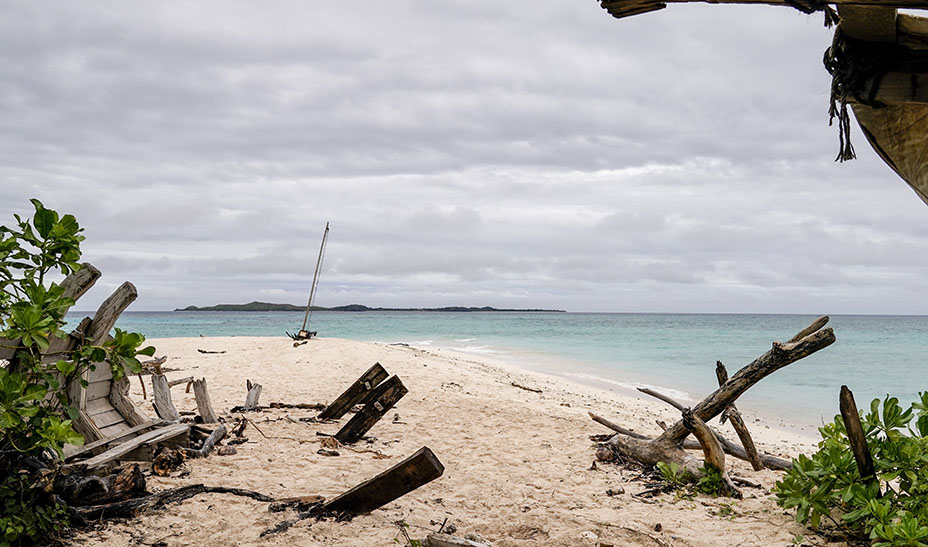 Turning toward Extinction Island, it’s very sparsely designed. It conjures the image of a single, solitary ship, with one lone survivor who is long since gone. The ribcage of the ship is, as you say, sticking out of the sand. Was that idea on your mind, coming up with something that expresses the last vestiges of life?

Totally. It’s what we clung to as we were brainstorming. It really needs that desolation vibe, especially for someone who is staying out there. If you’re out there by yourself, it’s a very daunting place. We didn’t want it to feel daunting in any way. We didn’t want you to feel safe or comfortable or anything like that. The contestants on the beaches have it rough, but out there? It’s a different game altogether. We really needed to work on that, and make sure that’s the case. The location itself is pretty incredible, too.

It’s rather unforgiving, in terms of the elements. Ghost Island was idyllic in comparison.

Yeah. [Producer Jimmy Quigley] worked very hard to make sure it would work the way we needed. He scouted a lot of different islands to see all of our options, and ultimately, that was the spot. That’s how it was for Ghost Island. We found the perfect spot for it and made it work. This was the same case, where the perfect place presented itself. We had the right designs, integrated them together, and now we’ve come up with something that really seems real. You have to start from there, so whoever is out there truly believes it’s real, and is feeling the feeling.

This interview has been edited and condensed for clarity. Continue on to see more photos from the latest Tribal Council set, and one more from Extinction itself. 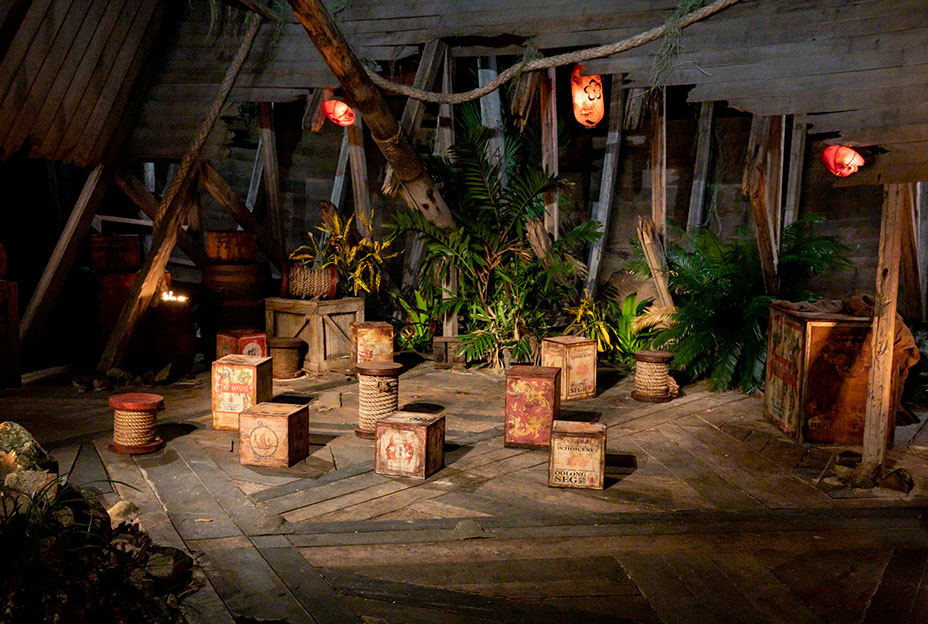 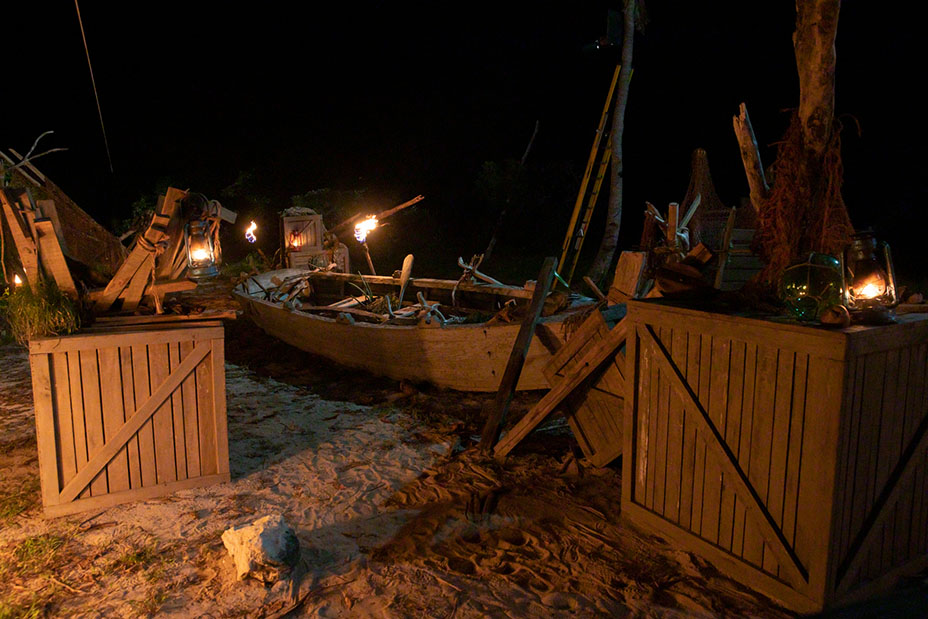 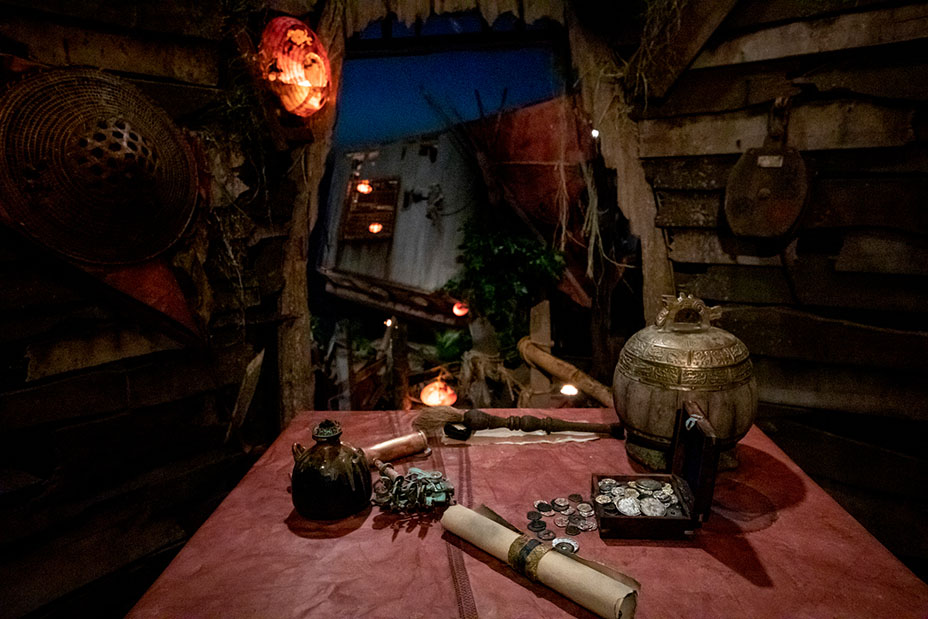 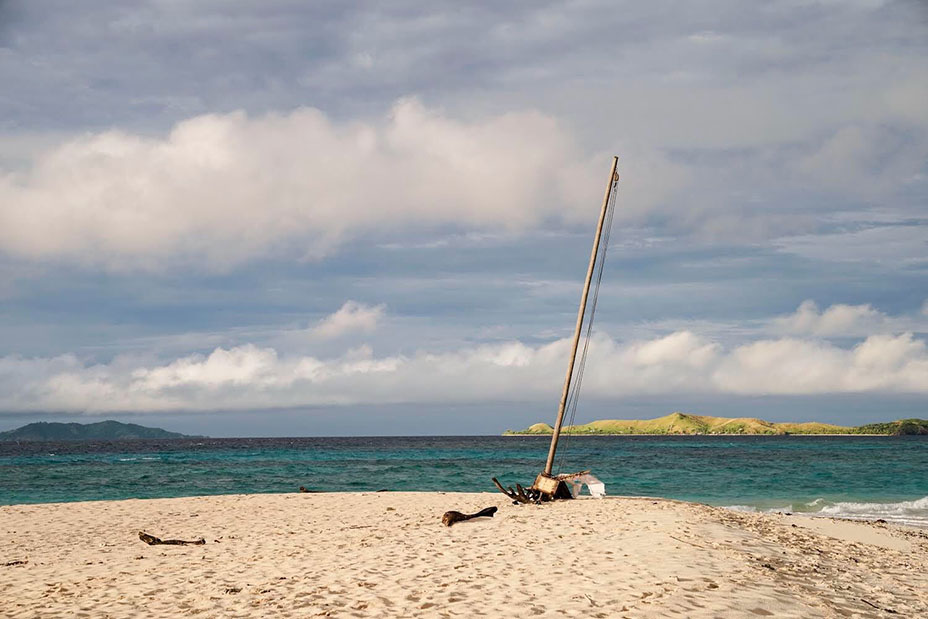 Follow THR.com/Survivor for more coverage ahead of the Edge of Extinction premiere on Feb. 20.