The merge episode of Survivor: Edge of Extinction radically transformed the season’s landscape. News anchor Rick Devens escaped veritable purgatory and returned to the game proper, while returning player Joe Anglim was banished to the Edge of Extinction. Meanwhile, two of the players voted out to Extinction in the pre-merge decided to throw in the towel and leave the game forever: Keith Sowell and Wendy Diaz, the second and sixth players voted out, respectively.

Despite learning about their renewed chance to fight it out on the Edge of Extinction, Keith and Wendy raised the literal white flag and removed themselves from the million dollar quest — right before they would have learned about their new role in the game as members of the jury. Would they have decided differently, knowing about their potential impact on the endgame? According to what both players tell The Hollywood Reporter in their exit interviews, the answer is a resounding “yes.”

Given the season’s central twist, Survivor castaways have been unable to share their perspectives in exit press, as is the usual custom. But with both Keith and Wendy fully eliminated from the game, they have been permitted to share some insight into their experiences. Read on for what they told THR about their shot at returning to the game, why they chose to walk away, their thoughts on some of their respective controversies and all their former friends and adversaries they now leave behind. 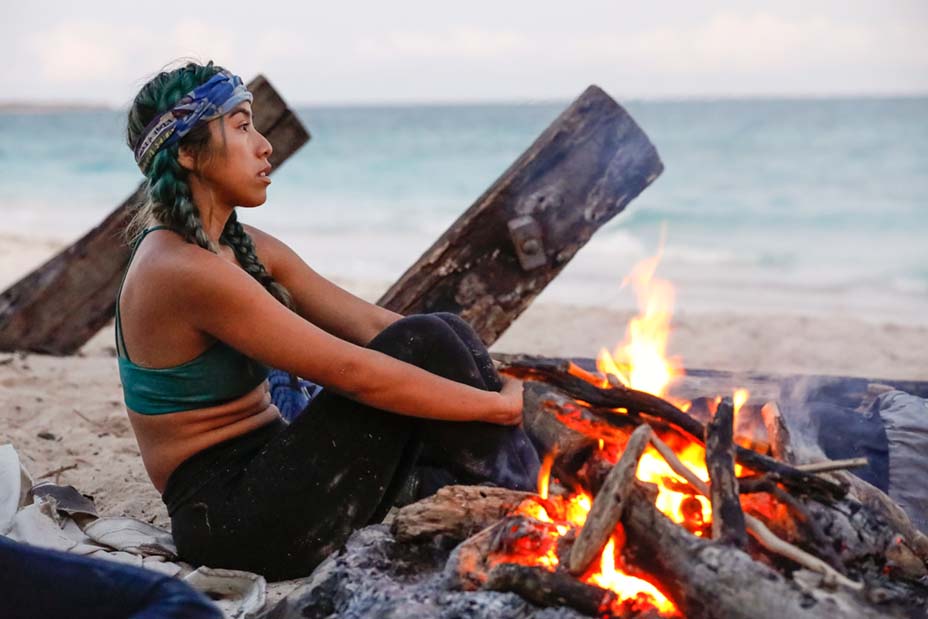 This week, you had the chance to return to the game. What do you remember about the experience?

Wendy Diaz: Walking back into the game and watching the expression of the current players was the most satisfying thing ever. I felt like an annoying little fly that kept avoiding their swats. Looking at the challenge during the walk through, I had this overwhelming confidence that I was going to win. I just knew it in my heart that I was going back into the game! The last part of the challenge was the most difficult for me, but when I sunk the first ball and was in the lead, I was overjoyed. In the end, I didn’t win, but that’s the way of life! I wasn’t sad because I knew I had tried my best and it just wasn’t in the cards for me.

Keith Sowell: It was all so mind-blowing! Definitely moments I will cherish forever! It was so surreal, because everything that had happened on Edge — and trust me, it was a lot — was all building up to this grand event. It really felt like some coliseum gladiator battle. The reveal to the players was just as impactful. I got to smile at all of the players I was hoping to finally meet, and hold just as bright a smile for those who voted me out and say “Yeah … y’all thought!”

Losing the challenge took such a toll on me because I was coming in as someone no one was expecting to win and no one was believing in my capabilities. Making my own stick practice advantage out of Chris’ and getting my leverage disadvantage all felt like this big buildup to a victory. But to lose because of some sticks and ropes that I was just going about tying together the wrong way, really took time to bear with. To this day, I’m probably the only one to believe I could have won if I had gotten the sticks, since I was quick to get the snake and ball on the second go. Hearing Jeff tell us about “another chance” caused me to go into complete shock.

Shortly after returning to Extinction, you both chose to leave. Why did you raise the mast?

Wendy: Upon returning to the Edge, I already knew that my adventure had been completed. I had nothing left to prove to anyone and had played the game I always dreamed of playing with zero regrets.

Keith: When you step back on the Edge, and immediately start cycling through the same motions, you realize that literally nothing has changed. I remember everyone else being down and reviewing their performance, while I was just keeping the fire going and doing some heavy thinking. The Edge and Survivor the game are two completely different dimensions. The Edge is abstract. It’s too simplistic to see it as quitting or not quitting. Everyone has something different to gain from it. The best way I can explain it is that your Survivor experience is your story, and when you are voted out, your story can come to a sudden halt at the hands of others. The Edge puts the pen back in your hand to finish the story your way. In mine, I proved all I needed to myself, broke the limits I needed to and my story was complete. The Edge did what it needed to for me.

Did you know you were being afforded the chance to join the jury, and if not, would that have influenced your decision to stick around?

Wendy: We did not know if we were to have stayed we could have been part of the jury, but I would have definitely stayed because the elements and the hunger didn’t affect me in any way. What was difficult for me was the boredom. Up to that point, the players on the Edge had explained to me that they had absolutely nothing to do and me, being as hyperactive as I am, I would have either gone insane or been tied up by my fellow castaways!

Keith: At the time I didn’t know we would join the jury. Of course since I’ve known, this thought has creeped in and out of my mind. But this follows suit with the whole “what if” mentality that no one has time for. Would it have influenced [my decision]? Of course, as all things do. Would it have changed things? Yes, because it adds just another level of excitement and complexity to a story! But at that point, the story was complete. 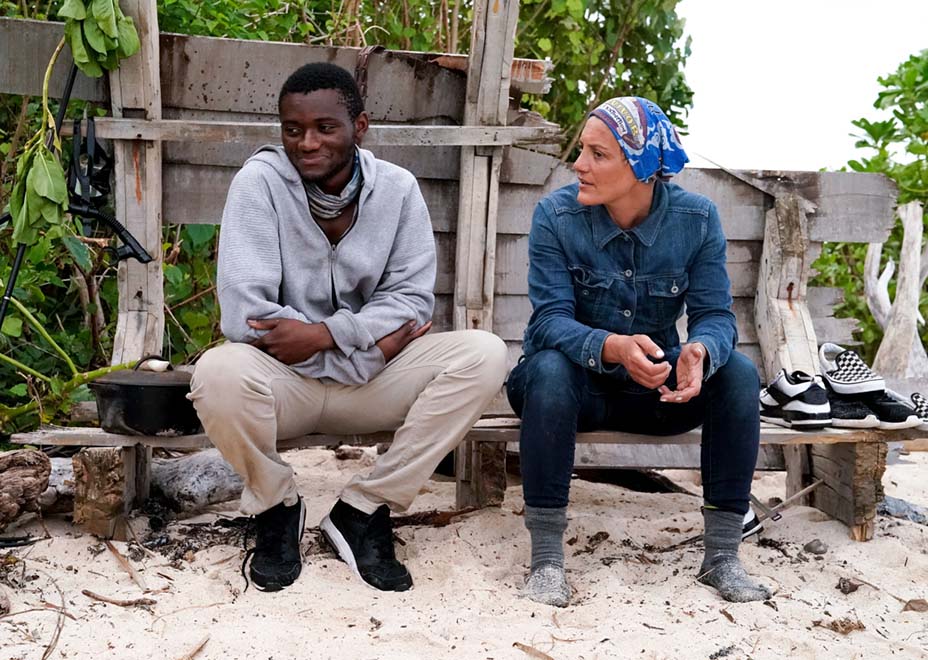 Keith, when you were voted out, we were left on a cliffhanger as to whether or not you were going to head out to Extinction. How long did you debate the decision? Why were you questioning whether or not to go?

Keith: This part of watching it all back has been hilarious. People have asked me this question all the time. The thing is, I was watching the cliffhanger for the first time just like everyone else was. I was so angry and vengeful after my vote off that I of course was taking the torch. Anyone who knows me knows that me praying was out of sheer gratefulness to have the second opportunity. I just laugh at how none of my other castmates were expressive as I was!

Wendy, what was it like to fulfill your master plan of releasing the chickens out on the island? How mad were your tribe mates? Anything you would like to say to people who have commented on “Chicken Gate” after watching it play out on the show?

Wendy: My tribe mates only speculated that I released the chickens when I started to show compassion for them, so they didn’t actually know that I did it. Only the people that actually know me will ever be able to understand why I did what I did. When I say that these chickens are worth more than a million dollars to me, you can take that as fact. There’s more to life than money, and I could never take a life away for my own selfish needs. All the people who don’t agree with me can go cluck themselves.

Keith: I was already a huge fan of Aubry. She knows the game in and out, which is the biggest reason why she was taken out. Although I wasn’t the biggest fan of many on original Manu, I can say I respected Wentworth because, regardless of whether she was responsible or not, she evaded every vote when her name was brought up at most [Tribal Councils], if not all. Chris and I mended things, so I really want to see all that he has left to prove. However, in the game, I was rooting for David because not only does he play the game from a controlling position, but he does it without being inauthentic or personal, and thus doesn’t burn bridges. Based on discussion while on Edge combined with my thoughts, I said Lauren would go far as a sidekick of Kelly. I didn’t have much on Wardog because his whole schtick was to not talk strategy, at least with those he didn’t want to work with, until after challenges. Of those on Edge, I’m rooting for Reem the most because we’d developed such a friendship from being on that island for so long. She’s still got so much to prove to herself and I hope she gets it all and more.

Wendy: Reem is the strongest woman in that game, period. To last as long as she has on the Edge just goes to show that she is a warrior. Keith does everything he can for his family. I hold nothing against him for turning on me because it was all part of the game. He is such a fantastic person. Chris and I never really had a relationship inside of the game. Rick is a nice person. Aubry is a great person; she never did anything bad that went beyond the game. Eric is the sweetest person I met inside of the game. Gavin is a super fan. David is such a great person, I was also rooting for him! Wardog, Lauren and Kelly? No comment. If you have nothing nice to say, don’t say anything at all.

'Survivor' Sends Biggest Casualties Yet to 'Edge of Extinction'