How does one best describe Ghost Island to a Survivor fan hearing about the theme of season 36 for the first time? Executive producer Matt Van Wagenen has a solid description, albeit a vague one.

“Survivor is a game that, in its history — and we’re talking about 35 seasons in the books — that there are a lot of bad decisions that have been made over the course of the show,” Van Wagenen tells The Hollywood Reporter, speaking on location from Fiji. “Some of these decisions can come back. They’ve haunted players throughout the history of the show, and there’s somewhat of a presence that these bad decisions have this season. There are things [on Ghost Island] that serve as reminders. I think for a Survivor geek, it is almost a spooky playground.”

When you arrive at the spooky playground, two towering totems stand guard at the mouth of Ghost Island — reminiscent of the statues found on Easter Island, and remnants of the Survivor Gods, depending on how seriously you believe in the lore. The statues flank a rope bridge, like fangs on either side of a wooden tongue. Past the bridge, the jungle, and instant immersion in Survivor history. Idols, necklaces and relics from previous Survivor seasons lurk in virtually every corner of Ghost Island, immediately upon entrance. A multiheaded totem looms over the main path, with one of its faces bearing an eerie resemblance to a certain Pearl Islands pirate.

Listen to the second episode of “First One Out: Ghost Zero,” featuring Wendell, Laurel, Chelsea and Bradley:

A few paces further inland, the path branches off in multiple directions, into what’s described by the Survivor team as “the circuit.” Walk forward, and you will arrive at Ghost Island’s camp, featuring a lonely shelter watched over by Jeff Probst’s own personal collection of torch snuffers, not to mention an ominous sign: “One bad decision can haunt you forever.” Turn left from the main path, and you’ll embark on a roundabout rocky road that also leads to the camp at the heart of Ghost Island. Turn right, and you’ll face slightly less harsh terrain, at least at the outset; walking too deep into the ghoulish jungle was forbidden at the time of our visit, but it leads into the heart of the mysterious island. Indeed, there are rumors of something lurking at the summit of Ghost Island, though it has yet to manifest at this nascent stage of the season. The full breadth of Ghost Island will make itself known in the 39 days ahead, to the point that the island itself, much like the game, is evolving.

Across the sea, Ghost Island’s more familiar cousin has taken on a terrifying new life of its own: Tribal Council, decked out this year with the same haunting aesthetic found all over the season’s namesake island. A wise man once referred to Tribal Council as theater, and that idea has taken on new life for Survivor: Ghost Island, as mythological masks adorn the open-air arena. Faces loom large at this Tribal Council, both happy and sad — angry, too. Furious, even, in the case of the voting booth, which is less a voting booth and more a sentient being: a massive monster with fire in its eyes, its mouth open wide. Inside those jaws of death, players will cast their votes all season long. Better write fast; you never know when this demonic force will choose to gnash its teeth.

“We’ve been lucky to have some pretty amazing artists on our show from day one,” executive producer and host Jeff Probst tells THR, standing on the set of Tribal Council mere moments after the first one out of the game was revealed. “What’s unique about this Tribal is it’s the first time we’ve created our own fictional world. We’ve based things on shipwrecks and other cultures, but Ghost Island doesn’t exist — except on this season of Survivor.”

Probst gives credit to Survivor art department legend Dax Pointon and his team for bringing both Ghost Island and the terrifying new Tribal Council build to life: “When Dax designed this Tribal Council, it was based on the idea of Ghost Island. When it comes to life, as you’ll see on the show, it literally comes to life. That voting confessional is alive! I’m looking at eyes that are burning with fire! All of that is created in the art department. It’s mind-blowing to me. You walk into the mouth of the Survivor God! And Ghost Island itself may be cooler than Tribal — which is hard to imagine, because Tribal is pretty cool!”

For more on the spooky playgrounds of both Ghost Island and Tribal Council, we turn to the art department mastermind who brought this season’s visual world to haunting life: Dax Pointon. Read on for his thoughts on the world-building theories behind both Tribal Council and Ghost Island. 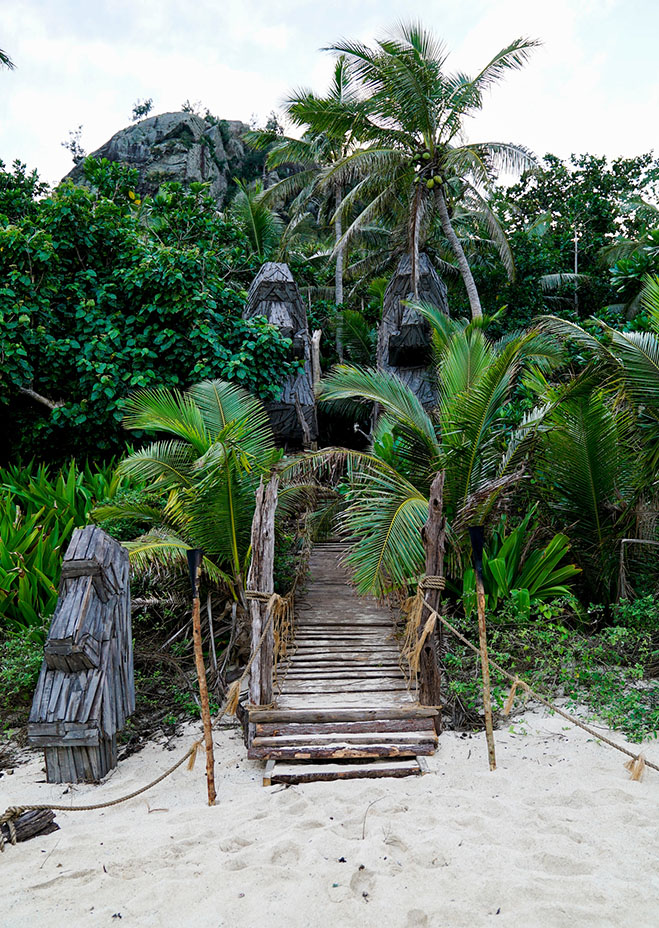 Ghost Island is the theme of the season, and it’s an enigmatic concept; nobody knows what it really means until you’re in the belly of it. What were your first thoughts when you heard about Ghost Island, creatively?

It’s a pretty long story. Jeff has had this idea for many seasons, but it’s taken a really long time for it to come to fruition. It was a very mysterious journey for us. It’s good that we’ve kept some of the mystery about it for the contestants. We’re hoping that it’s coming across as this mysterious place where no one really knows what’s going on there. Is it a real thing? What happens? Is it alive? Is there bad magic going on? It has this magical vibe to it.

Ghost Island itself is covered in Survivor history. How was that organized?

Fortunately, since the get-go, we’ve had people interested in getting these items at auctions, or one way or another. Jeff has always had the torch snuffers. Mark Burnett has the original necklace. These things, we knew where they were — we just had to work out a way we could get ahold of them. It was important that we used the originals, because obviously there’s that Survivor magic attached to them. There were some we tried to track down that we knew would make for a great story, but we just couldn’t find them. The ones that are going to give that extra magic to the contestant who gets ahold of them or sees them, or if you go to Ghost Island and you become part of the items that are there? It’s pretty cool.

We have seen a good amount of Ghost Island, but not all of it — which gives off the idea that Ghost Island, even as the season has started, is somewhat alive for you guys. Is that the proper notion to have? For instance, we haven’t seen the summit yet.

You guys saw it at its bare bones. You’ve seen the circuit and the bare bones of it, where the shelter is, but there’s something else that’s alive in there. There’s mystery and gameplays and twists that you have no idea about yet — and the contestants don’t know, either. It’s pretty exciting. 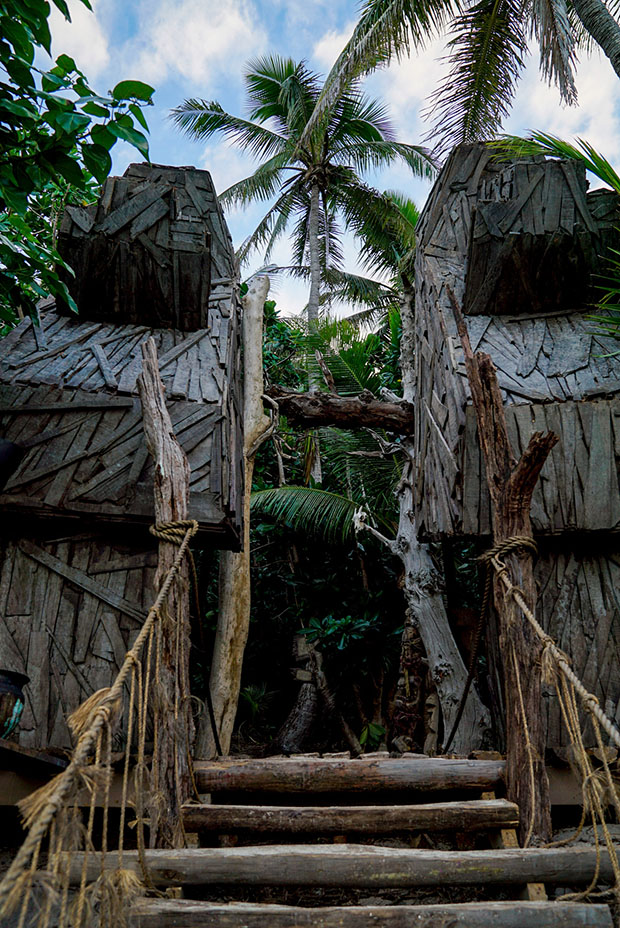 How did you envision the [statues] that are all over Ghost Island and Tribal Council?

There are island cultures that have been around for millennia. People don’t know how old the Easter Island cultures are. There’s a lot of mystery along with these statues. Who built them? Where did they come from? It brings a mystery to our Tribal as well. This guy, he’s built around the Easter Island heads, basically. I changed the design somewhat so it was easier to build. We gave it a wooden texture, almost a Survivor texture, and made it our own. We have the feeling of an old culture or an old civilization that was here, but it’s all made up. It’s our Survivor spin on it, which is cool. It’s the first time we’ve been able to branch out and do our own thing.

A great part of your job is the ability to create universes — and this season, you’re creating a universe that’s completely based on Survivor history.

Jeff’s a big driving force on that. He gave us this idea and this feel about it. It is a history. We’re looking at so many years of Survivor. What we did was extend it a little bit, and made it that this history could be much longer and greater and broader than we know, and Survivor is just tacked onto the end of it. There are these Survivor Gods, if you will, who are looking out over this game. The items that are here, they’re real. They have powers — positive and negative. That’s the background vibe we were trying to get out of it. The items we put into Tribal Council — these carvings and masks — are here to keep that idea alive for the contestants. That’s the universe we’re building this time. 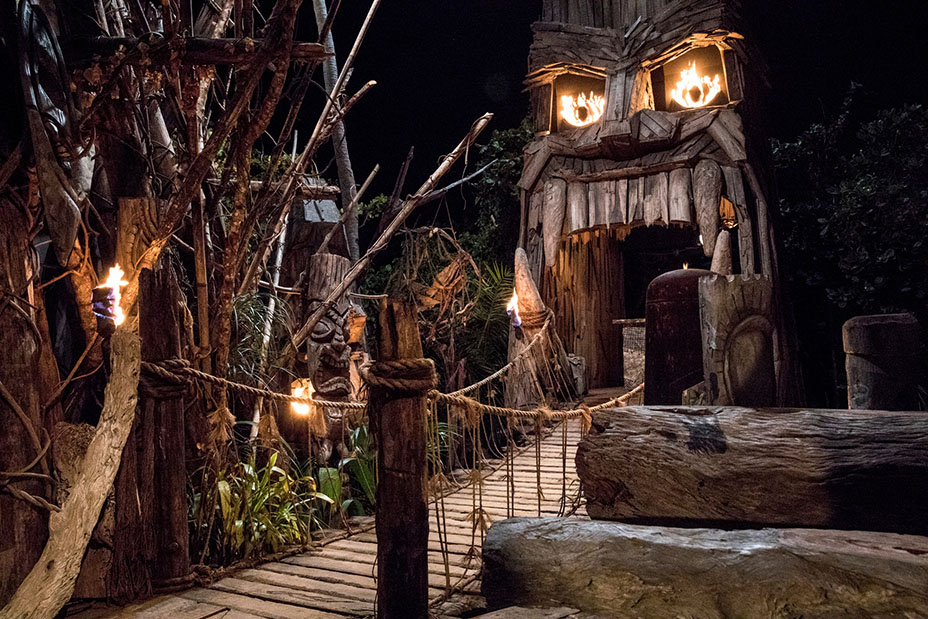 There are masks found around Tribal Council. Some of them are happy, some of them are sad, some are laughing at you — is it meant to represent the range of emotions one gets from watching Survivor?

It’s a little Shakespearean in a way. You see the sad mask and the happy mask; it’s a pantomime, if you will. There’s drama going on. There’s tragedy. That’s what Tribal Council is. People walked in tonight and they looked around, and they had a big smile on their face, knowing what they were getting into. Well, the person who was voted out certainly wasn’t smiling. But it’s this weird happiness and sadness. It’s all here together. That’s why the masks are that way.

The voting booth this season is this massive face you’re entering, with these giant flaming eyes. Are you trying to evoke the feeling of getting swallowed up by Survivor?

The Survivor God, or however you want to think of it — “the Ghost Island dude” — it’s watching your every move. His eyes are on fire. You literally walk into his mouth and you’re at his whim. We wanted it to be awesome and huge. I say this every season, but I think it’s the tallest vote structure we’ve ever done.

It is. It’s cool. Part of it is we wanted this whole universe to be ominous and scary, but in a way that brings the child out in everyone. It has to be fun. Even though it is this sort of [dark] thing. Ghost Island has this sense of discovery about it, and an excitement about seeing these things. Tribal Council, it’s almost like you’re at a Survivor theme park. We had that broad expanse of what we could draw upon. Anything goes with this one. It was so fun. So fun. 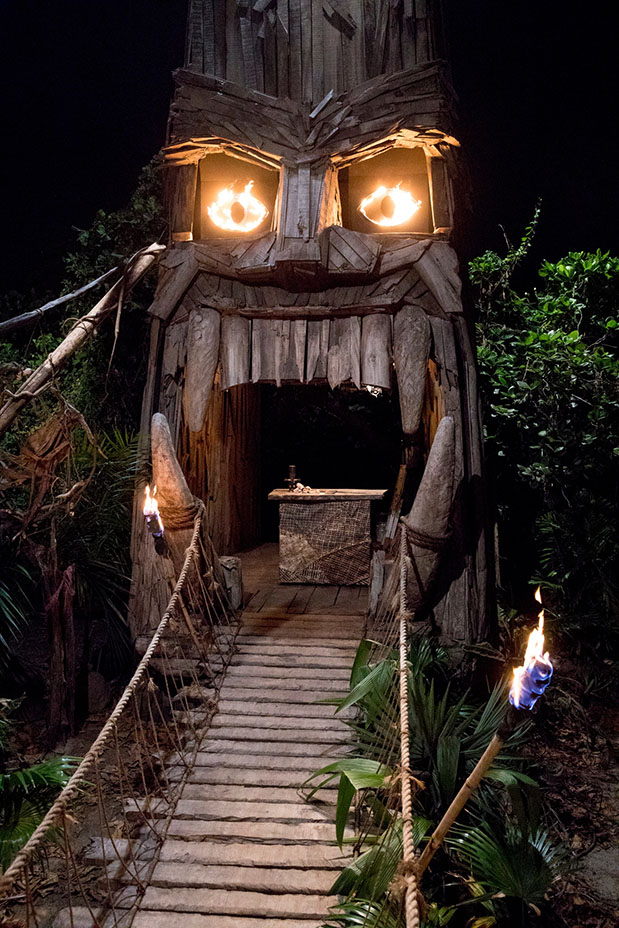 Learn more about both Ghost Island and Tribal Council in the first episode of The Hollywood Reporter‘s preseason podcast series, First One Out: Ghost Zero, in the player below:

Catch up on all of our preseason interviews:

What’s your take on the Ghost Island theme and this season’s Tribal Council? Sound off in the comments section below, and stay tuned to THR.com/Survivor for daily coverage of the show, including a much more intimate look at Ghost Island coming soon.