Survivor champions Boston Rob Mariano and Sandra Diaz-Twine (alongside the gigantic statue replicas of their heads) are the inspiration behind Island of the Idols. But are they the stars of the CBS drama’s current season? The highly competitive cast would beg to differ.

Given the talented ocean of players, it’s easy to pick your own personal favorite among the crop of season 39’s castaways. Some options: Kellee Kim, who won an immunity idol and hid it from her tribemates deep within the recesses of her own hair; Jamal Shipman, yet another idol-holder, and someone who, like Kellee, has not shied away from discussing the ramifications of the real world’s social politics on the game of Survivor; Janet Carbin, the lifetime lifeguard who most recently visited the titular Island of the Idols, only to shoot down an opportunity to play for an advantage; and Kentucky’s own Elaine Stott, who visited Rob and Sandra one round earlier than Janet, earning a key victory for her alliance in the process.

All of them are worthy favorites, as are many others — but as far as singular forces of intensity are concerned, one Island of the Idols castaway stands apart from all the rest: 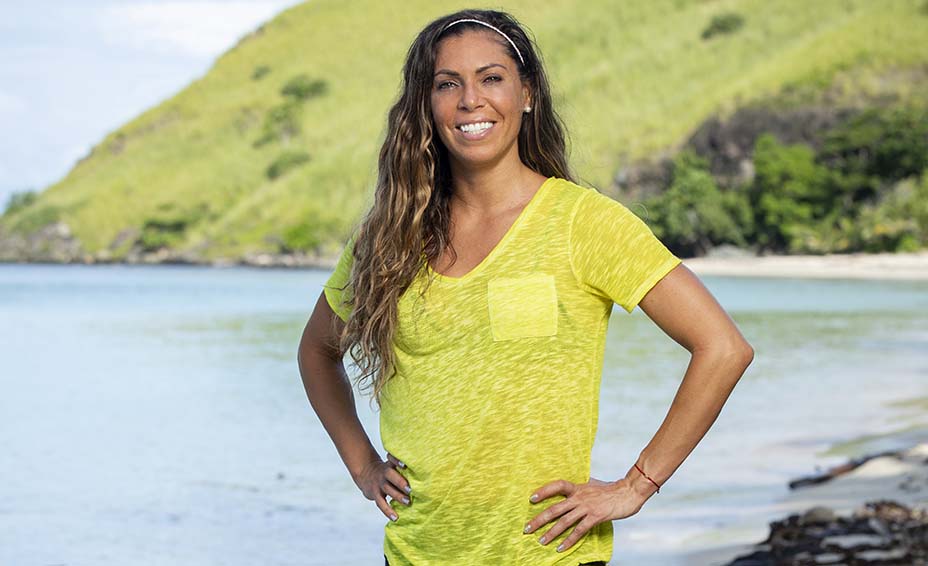 …Noura Salman, the health and wellness entrepreneur, originally hailing from the Vokai tribe, currently living on Lairo beach, looking ahead at this week’s looming merge.

In an alternate Survivor timeline, there’s a world where Noura not only misses the merge, but leaves her tribe first, Reem Daly style. Even without the Edge of Extinction this season, Noura has somehow survived and thrived through three visits to Tribal Councils, laughing her way through the Jeff Probst interrogation process time and again, even though she had lost her right to vote at one of them.

By her own admission, Noura is new to Survivor — as a player, of course, but also as a viewer. Of those who have visited Island of the Idols thus far, only Noura stands out as someone who may or may not have instantly recognized Rob and Sandra for their past Survivor achievements; the jury is still out on that one. Meanwhile, for Noura, the jury is very much in. With Jack Nichting as the first member, Noura has guaranteed that she will at the very least last long enough to cast a vote for the winner of Survivor: Island of the Idols, if not sit in the coveted position to win the season herself — an outcome that will surely find its way to the center of a summoning circle or two before long.

“Noura is a wild card,” executive producer Jeff Probst told The Hollywood Reporter about the player in the preseason, with only one day of production currently under their belt. “She’s got this great energy. I think she’s either a great fit as an alliance member who will spark about and maybe do some of the dirty work and get inside and find things out, or she’s outside the alliance and she’s in trouble. Right now, she’s probably making decisions that are going to determine if she survives her first couple of days. She has the kind of personality that could be too much for somebody, especially when everybody’s cagey, but she also has the type of likability that people could go, ‘She’s not going anywhere. She’s super cool. She’s easygoing.’ It just depends. In those early moments [of the game], you have to read the room.”

Reading the room of the greater Survivor fandom, the results are in: Noura is an endless wealth of entertainment through seven episodes and counting. Ahead, THR briefly checks in with Noura for the first time since the preseason, to get her thoughts on the coming merge, her first few weeks on the island, and more.

Congratulations on making the merge! By your own admission, you’re relatively new to the world of Survivor. In the preseason, you viewed this as a net positive for your place heading into the game, seeing yourself as a “disruptor.” How did your expectations measure against what you actually experienced in these first few weeks of the game?

Coming in to play, I knew the food piece would be the least of my worries because I already eat plant-based. I’m fully vegan and I am used to going long periods of time through intermittent fasting or long water fasts. This definitely gave me an edge socially and in challenges because I never felt like I was missing out on something that everyone else was. I didn’t care about the food rewards. I knew all I needed to do was just overdose on coconuts to keep my energy up and stay full. I was eating easily one to two coconuts a day, and I never got sick out there.

I get along with all types of people – ethnicities, ages, genders, etcetera — but nothing prepares you for having to manage your personality and how you come off to others in this extreme format. They really don’t know you at all, and no words can create that bridge. It takes time. My big challenge was that they didn’t know me. They didn’t know that I am intelligent, successful, have a big heart and I am authentic. In this experience, only you can portray you. I am an overwhelming person and even though I get along with all types of people, in this environment it is very hard to decide how you will be your true authentic self, how you will honor those values without coming off to strong or bulldozing over other personalities and perspectives and values.

It’s hard to hone in on your biggest moment yet — the trip to Island of the Idols is a standout, of course, and if you have any further details from that experience you would like to share, please, by all means…

I think what people need to realize with the visit to Rob and Sandra is that they are villains and that is not my personality. I am more of the hero/heroine role, so it was actually hard for me to take advice from villains. When they gave me the various options of persuading my tribe, all of these were villain approaches. I didn’t feel comfortable executing because they are simply not me or my style. You can see the distinction when I said “heart” / heroine and Rob said “ego” / villain.

If I had the opportunity to do this again, I would have candidly told my group that I know the details of tomorrow’s challenge and that if I get the most important role in that challenge I will get a block a vote advantage. If I don’t get that role, I would lose my vote which would be detrimental to our tribe in the event of a swap; we wouldn’t have the numbers. This was an expensive lesson for me, but a good one to have early in the game. After this moment, I knew I was going to play the Noura way, with truth and honesty versus lying and backstabbing.

This past week’s Tribal Council was an eventful one, centering on gender dynamics both within Survivor and the world beyond it. What are your memories of how that Tribal played out?

Honestly, I remember every second of the whole game. Being in that particular Tribal Council, it was a privilege to speak about a topic that hasn’t been dissected in that manner on Survivor. I felt like it was a historic moment going down. I wasn’t afraid to say, “Yes, I want women to band together.” In that moment I said yeah, cause why should it be a secret? Why shouldn’t we connect with one another? Why shouldn’t we bond? There is something unique about the female gender. One, I was thinking, “Why not,” but most importantly, you want to see women do better in the game more than ever before. In life and in the game, women will compete against each other, tear each other down and then rely on the men to get to the end. But how great if we can bond together and we don’t need them to get to the end — we pave our own way. And how lucky were we that we had an advocate for women in Jamal. He was that bridge between men and women in that conversation.  He helped to facilitate and move that conversation forward. 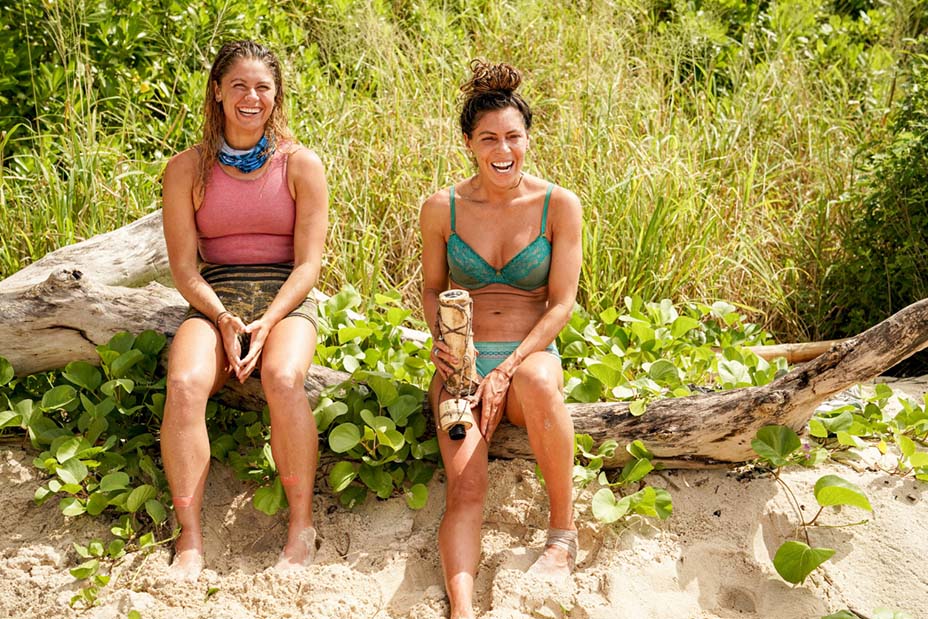 Heading into the merge, I want to get a sense of where your head’s at with respect to the rest of the players in the game…

Going into the merge, I planned to rely heavily on who I felt were my two closest relationships: Lauren and Kellee. From the early days, I felt the closest with these two and felt I could speak my mind and share my opinions and gameplay with them.  Beyond that I felt like I could have close friends and sisters to go through this experience with. Another integral relationship to me is mine with Dan. Time and time again he would remind me that my greatest strength in the game is through my heart and not my head. Whenever I was too in my head my game would be thrown off.  I felt like he was the best gamer out there. That relationship was great because it gave me a better aerial view of the game and where each player stood at all times, and I felt like I had someone who would keep me in check and look out for me.

I was concerned about Dean making it to the merge cause it seems like he is the cat with nine lives. He had proven I can’t trust him. And I was extremely excited to meet the four Lairo I had never met before: Aaron, Elaine, Elisabeth and Missy. They seemed to have so much energy and fun to them. I was looking forward to being with the athletes.  Vokai was always about strategy and I was ready for some more fun and laughs.

Looking at yourself from outside the game, what are you making of the audience’s overwhelming reaction to the Noura show?

Honestly, I am loving it! I know I am intense, opinionated and beat to the rhythm of my own drum. This isn’t anything new to me, but I will tell you I am having fun with it. I am embracing the experience. I told myself coming into this I wasn’t going to walk around on eggshells on how I am coming off to others and coming off on cameras. I didn’t want to waste an ounce of energy on thinking about how I am going to be portrayed. Because I am an entrepreneur who does things her way, it was a big contrast to play amongst people who are actually used to living and operating in a certain identity and persona. My life is Noura’s world and I work hard to create and maintain it. I do the work I want to do and live the life I want to live and I put a lot of energy into making my dreams come true. I don’t take orders from anyone else or get stuck in how I am perceived. I hope people take from this the reminder that your sole job in this world is to be yourself. It is the hardest job in the world, but it is also the most important, and no one can do it better than you.

'Survivor' Castaway on Boston Rob and Sandra's Trial By Fire: "It Was Mission Basically Impossible"