[Warning: This story contains spoilers for the season premiere of CBS’ Survivor: Heroes vs. Healers vs. Hustlers.]

“Oh, this poor girl. She’s going to get voted out first.”

Actual actuary Chrissy Hofbeck called her shot in the pregame, and as it turns out, she has good aim. The Heroes tribe did indeed lose the first challenge of Survivor: Heroes vs. Healers vs. Hustlers, and when they went to Tribal Council, they voted unanimously to oust former Olympic swimmer Katrina Radke from the game, making her the first one out of the season.

“She showed up yesterday with a red sparkling visor with red sequins all over it,” Chrissy told me during our pregame interview, when I asked why she felt Katrina would go home first. “I just thought, ‘That’s not the way to fit in with these young kids!’ And now she’s all in tie-dye today. I’m sorry, I know we all want to be individuals, and I praise her for coming out with her individuality — but individuality and the game of Survivor don’t necessarily go together. You have to play the game.”

Chrissy wasn’t the only one who successfully predicted Katrina as the first one out. Other members of the cast identified the former Olympian as an early boot, including Ryan Ulrich of the Hustlers tribe and Roark Luskin of the Healers tribe. But for her part, Katrina wasn’t worried at all about being an early sacrifice to the sacred deities known around these parts as the Survivor Gods.

“Maybe I should, but I don’t. It’s going to be somebody else, I hope,” Katrina said with a raspy laugh when I asked her if she was afraid of becoming the first one out, four days before that nightmare scenario became her reality. “Here’s the deal. If I spend all my time out there trying to think about every possible scenario, I’m going to be stressed and tired. I have 39 days out there. I have to stay grounded and energetic enough to maintain myself through all those days, emotionally, psychologically, spiritually, physically, everything. If I start thinking about all of that too much right now, I’m going to be a mess.”

'Survivor': The One-Stop Shop for All Things Season 35

Whether she was thinking about it or not, Katrina found herself at the center of the messy Heroes tribe, swiftly on the outs of the quickly formed foursome of Alan Ball, Ashley Nolan, Ben Driebergen and JP Hilsabeck, on the wrong side alongside fellow 46-year-old Hofbeck. Even if the tribe had set their sites on Chrissy instead of Katrina, the actuary would have survived the evening, thanks to her possession of a super idol, usable only at the first Tribal Council. As luck would have it, Chrissy didn’t even need to use the advantage, its powers now deactivated, but still usable as a bluff moving forward. Not that it’s any consolation for Katrina, now forced to spend the next few weeks in Ponderosa and on the pre-jury trip, away from her family and loved ones for more than a month.

Read on for some select highlights from my conversation with Katrina, and listen to the full interview in the final episode of First One Out, our six-part preseason podcast, below. 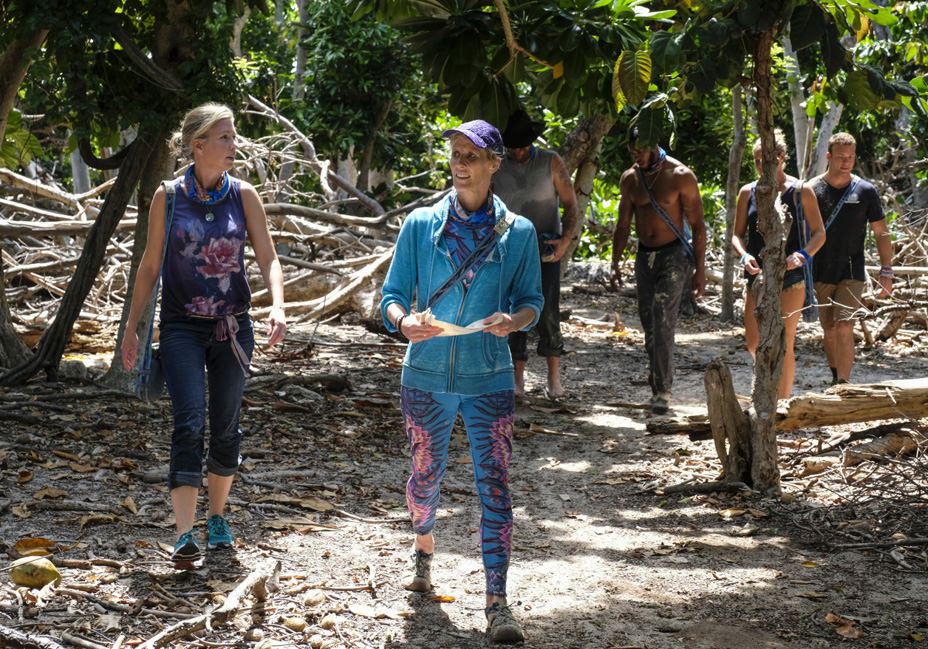 Katrina on how she knew she was in immediate danger with the Heroes:

“It was like trying to fit a square peg into a round hole on that tribe. It’s so funny, because of all the people I saw at Ponderosa before we started the game — obviously we weren’t talking to anybody, but nonverbally, I’m very good at picking up people’s energy — I connected with so many people, and was pumped about so many different people to work with. When I got put with the tribe I was on, I went, ‘Oh, my God. These are all the people I didn’t connect with.’ Very interesting. A very different group. I knew it was going to be a challenge to fit in with the group. It was an interesting deal.”

Her thoughts on being designated as a Hero in Survivor‘s eyes:

“It’s funny. I’m an Olympic swimmer, but I’ve done a lot of other cool things in my life beyond that. For the show, I know that’s one thing they were really promoting, being an Olympian. In people’s eyes, it’s a heroic act, in terms of accomplishing that. I personally don’t see it like that, so it was interesting when the producers were going, ‘But Trina, don’t you see yourself as a hero?’ No, I don’t! I’m a human being who was maximizing my potential, going after what I love to do, and pursuing it fully. That’s what I did. I guess there are a lot of characteristics that could be called heroic, but to me, a hero is more like Mother Theresa or something.”

Why she feels anyone can become a Hero:

“I really believe every human being has the potential to be heroic in their acts. If we’re letting go of the limits on us, we can all be amazing people. We all have much more untapped potential than we realize.”

Her initial thoughts on the Heroes tribe, and how she fit in:

“I think I would have fit in way better with the Healers tribe. I’m a therapist. I understand people. I think even the Hustlers tribe, I would have fit in better. I think with our tribe, there was a lot of pride, and repression almost. There were a lot of hard nuts to crack, if you will. … We worked very well, the six of us. We were very action-oriented. We immediately made a decision on where the shelter would go, where our fire pit would go, where we would go to the bathroom because we’re out in the middle of the woods and you have to go to the bathroom … we started gathering wood, things to build the shelter, and we got palm leaves to build the roof. It was a cool scene. I loved that shelter. We were kind of in a treehouse.”

Katrina’s thoughts on which Hero impressed her the most:

“I knew Chrissy was trying to lump me with her to get me voted off first as the middle-aged woman, so to speak. We were so different. But she did a good job. She has worked the people in this group more than anybody. I feel like she has a softer, feminine presence that makes people feel safer, but she gets a lot of information from them and uses it to get them off. I think she can win the game. I think she’s that good at that piece. Physically? She’s not strong. She gets nervous before the challenges. She threw up [in the first challenge]. I tried to get Ashley and a few others to vote her off, because I knew she was a big threat.”

Why Katrina voted for Ashley at the first Tribal:

“I didn’t want to. I thought Ashley and I could have gone far in the game together. But for me to supposedly save myself, I had to go along with what we so-called agreed upon, even though I knew it wasn’t real. We tried to get Alan, Chrissy and Ben to vote somebody out — the so-called power couple that everyone was talking about. I really didn’t want to vote out Ashley. I thought we could have done well together in the game. She was so mad at what happened with the Alan thing. She didn’t quite believe if I was telling the truth or not. It was unfortunate that at that time, I couldn’t fix it.”

Katrina’s view of Alan’s accusations against Ashley and JP:

“He admitted to me yesterday, privately, ‘I freaked out. I know I freaked out. I’m sorry I used your name.’ Because I approached him twice about that. Why would you do that? Basically, what happened was Ashley and I went to the beach to talk. She wanted to vote Chrissy out. She really wanted to do that. We were talking strategy a little bit for the first time. Then he freaked out because we were talking alone. He went up to her and said, ‘Trina told me you have the idol.’ That’s what I was told; Ben told me that, because Alan went and whispered that to Ben when we were all going to bed. And then something happened where all the sudden Alan, Ashley and JP were on the beach together for a good hour [where JP stripped naked to prove he didn’t have an idol]. Good for Alan for making him do that, right? I mean, what the heck? And of course, JP, who does not like emotion too much, did not like that!”

Her thoughts on the specific reasons why she was voted out:

“I tried to play gently with people. If I was on Game Changers, I would have been slow out of the gates, and these people thought I was way aggressive. No freaking way! It was an interesting deal. I think the tribe I was on … every different individual creates a different dynamic in a group, and I’m very mindful and aware of all that. If you don’t fit in energetically with other people, you’re going to be out somehow. I’m sure it’s the same as with any tribe that goes on. The day before I got voted out, I knew I wasn’t gelling with these people. They didn’t quite know what to do with me. I don’t follow the rules the way they follow rules. I eventually went out on the beach to do my meditation. They probably thought I was a bit kooky and eccentric and whatever. They know I’m an Olympian and they don’t quite know what that means, and I would keep talking to people, and that would scare them. They couldn’t define me, probably.”

Why Katrina isn’t worried about the label of being the first one out:

“It’s a game. I’m really glad I had the opportunity to even be on Survivor. Having gone through casting and seeing how many people got sent home? It’s a big, arduous task they have on their hands, to create the dynamics they’re looking for for groups. … I’m not worried about being first out. It’s a game. We lost the first challenge. Somebody’s gotta go home. It was me. So it is what it is. You can get really wrapped up and have your pride get hurt and stuff, but I’m pretty solid inside.”

Learn even more about Katrina’s three days in the game by listening to the final episode of First One Out.

Follow THR.com/Survivor all season long for more coverage of Heroes vs. Healers vs. Hustlers.