Frank Capra. Louis B. Mayer. Robert Wise. And now, Paris Barclay. The Harvard grad, who got his start making music videos for Janet Jackson, Bob Dylan and LL Cool J, among others, is the latest recipient of the DGA Honorary Life Member Award, in recognition of his leadership in the industry, his contribution to the Directors Guild and the nearly 200 episodes of TV he’s helmed. Barclay took a break from his work on ABC’s Station 19, where he’s the producing director, to reflect on his decades-long career.

There are a lot of first in your bio — the first Black this, the first openly gay that. How do you think that has shaped you and your choices?

Well, I was the first black student in my high school before all these big firsts happened. This was a small school in Indiana, and I was Jackie Robinson. I really relate to his story because you’re coming in there and you don’t want to be the one who fails. And that ethos has stuck with me whenever I’ve had the opportunity to do something that hadn’t been done before by a black person. I always think, “I’ve got to do this as well or better than anyone could do it.”

You got your start making music videos for folks like Janet Jackson, Bob Dylan and LL Cool J. You must have a good story.

Well I often refer to “Mama Said Knock You Out” because it’s a video that was groundbreaking and I got awards for it and it was the video that it was because of exigency. We didn’t have the time that we wanted to shoot it and we had very limited budget. Plus, I wasn’t allowed to do the vision that I had for the video, which was a gigantic boxing match with 300 extras and LL Cool J boxing a real opponent in the arena with sweat coming off. I really wanted to do a whole Raging Bull thing. Then, a day before, Russell Simmons, who was his manager at the time, said, “No way, I’m not putting LL Cool J in a ring with a real boxer.” So, we had very little time to shoot and very little was shot. As a result, the video ended up having these intense shots that would run 20 to 30 seconds and everyone thought that it was so groundbreaking that we weren’t cutting away from [LL] but, really, I didn’t have anything to cut to. I bring up that story with directors I work with a lot because it’s true that sometimes necessity remains the mother of invention.

You’ve devoted your career to directing television, which is better known as a writers’ medium, over film. What’s been the appeal?

I come from a big family that got severed and a bit blown up when I was in college by events that were very dramatic and, in some cases, very sad, and I think, like so many directors, I’ve always been seeking to put my family back together. When you’re working on a TV show, especially if you’re the producer-director, like I am, you have an opportunity to create the ethos of your family — except really functional. You can do that with a film, too, but it’s a short period of time and then you disperse. With TV, it can be years.

Looking back on the nearly 200 episodes you’ve directed, which stand out?

I got to do “Hearts and Souls,” which was Jimmy Smits’ final episode of NYPD Blue. [Co-creator] David Milch was the person who showed me that TV can be written in a more novelistic way. He was open to me coming into his writing room and laying on the floor with him when he wrote scenes, and I saw how deep something could be. I got that script and knew it was going to be devastating for our family. The crew really loved Jimmy Smits, so the process of grieving was very palpable, and I was there to keep it all within the box of what the episode would be.

I also did the “Wheels” episode of Glee. It was the first season and I remember looking at those actors, thinking, “Wow, they really need help. They need assistance acting.” I mean no offense, but they needed to be challenged to go deeper and to really know what their skills were. The script was more emotional because they all had to experience being in a wheelchair to relate to Artie [played by Kevin McHale], so with each cast member we plumbed the depths of it. I think we shifted the show to become a bit more realistic and less broadly comic in that tone. Ryan [Murphy] was really proud of it and so was I.

And I get along with all of them. Ryan is a spectacular genius, especially when it comes to a story. Milch is writing a novel that’s as beautiful as Robert Penn Warren’s. Sorkin is doing his thing that’s just completely unique. 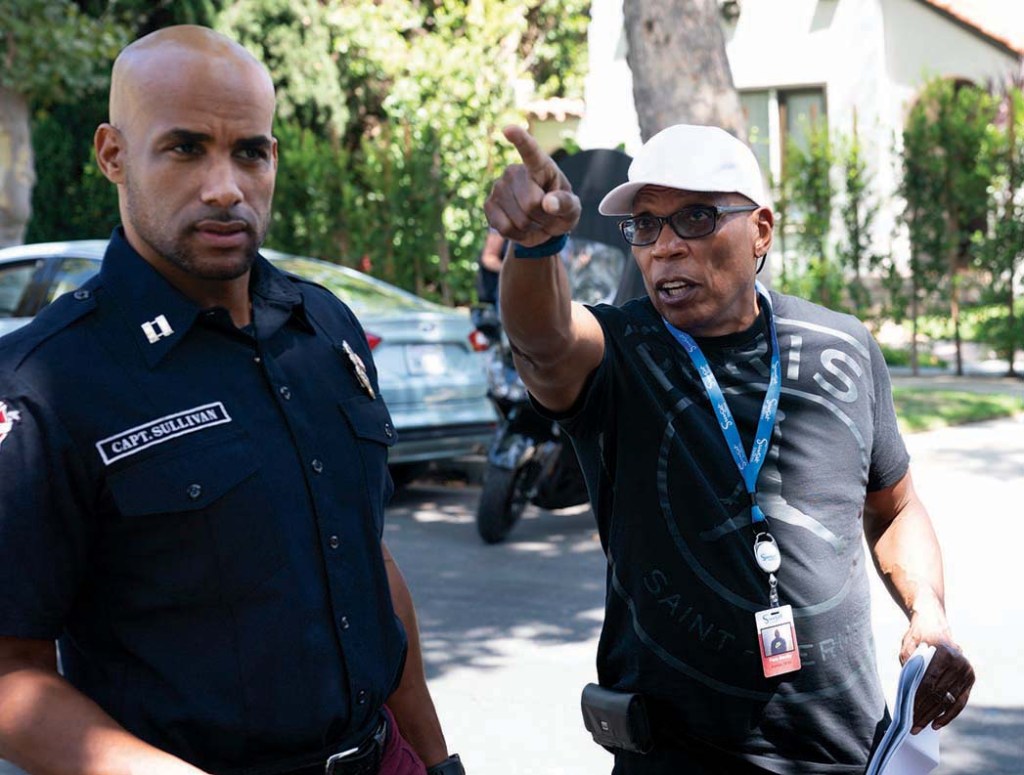 You’re the throughline. What’s your secret?

My secret is to use my talents and my experiences to give them their show. I don’t try to make my show. There’s no Paris Barclay stamp. I try to get into their psyche, as dark or as light as it may be, and say, “What do they really want?” Dan Fogelman really wants that heart. Ryan wants the flash that reveals the heart, almost like a magic trick. And Kurt wants to go through the brutality of humanity to show the love that’s underneath. These are simplifications of it, obviously, but you figure out what they’re really after and then you figure out, “How can I use my skills to get that?”

Sounds like you do plenty of research on the showrunner and not simply their script.

I do a lot. Before I do a show, I really want to know who the showrunner is. I read all of the interviews they’ve done and research them and then I ask other directors who’ve directed with them, “What makes them tick? What do they respond to?”

If you had this career to do all over again, is there anything you’d do differently?

I turned down a few jobs that became big successes, none of which I’m not going to mention now. Tt was back when I was too fancy to do things. And I turned down things that became huge franchises. Things that have now been running for 16 years, and have spawned three sequels. So, I’ve had that experience of looking back and saying, “Why didn’t I do that?” But even on the jobs that were unpleasant, I learned a lot. And usually the jobs that were unpleasant were unpleasant because of me — because I wasn’t able to get into the showrunner’s psyche and translate my talent into their vision.

You’ve spent a lot of time at the negotiating table for the DGA. As you sit here today, what’s the most pressing issue facing the industry?

I think it’s how do we make this world of directing a meritocracy? There have been a lot of conversations about diversity and it seems to be sort of jamming people into slots. When are we going to get to the point where we can just look at a person’s talent and judge that, because right now the slot approach, as I call it, is subject to ageism. Sometimes people are too experienced for a particular job or they’re not the “new thing.” So, when is it truly going to be level? That’s the future I want to get to — where it’s not about the color of your skin or your gender but rather about who you are and whether you fit.

You chaired the COVID-19 safety negotiations committee. What did you learn?

That the unions could work together. We had the DGA, IATSE, SAG, the teamsters, basic crafts all working together for the first time to negotiate with the producers in a peaceful, harmonious and positive way.

It only took a global pandemic.