[This story contains mild spoilers from the premiere of ABC’s The Bachelorette.]

Clare Crawley waited a long time to be the Bachelorette.

After being jilted as runner-up on the 2014 season of The Bachelor with controversial star Juan Pablo Galavis, she returned for the 2014 and 2015 seasons of Bachelor in Paradise, but failed to find love. Three years later, she ended up leaving Bachelor Winter Games with a fiancé, only to call off their engagement two months later.

In her own words, as she says during Tuesday night’s premiere, “Each and every time I’ve gone on Bachelor and Bachelor in Paradise, my journey ended so horribly wrong.”

It’s no wonder the 39-year-old was ecstatic when, this past February, she got the call from franchise host Chris Harrison telling her that ABC had picked her to star on the next season of The Bachelorette. But the following month, as production was already underway and Crawley was preparing to film the first night of her reality TV journey, the outbreak of the novel coronavirus would put the entire country on pause. Swiftly, California issued a stay-at-home order and productions state-wide instantly shuttered.

So, what happened next? Tuesday’s premiere of Crawley’s season filled viewers in on what transpired in those weeks and months to come, and explained how the team behind The Bachelorette figured out a way to safely deliver a pandemic-era version of the 16th cycle.

“I’m a germaphobe. So when I got the call about restarting filming, my reaction was, ‘What exactly is going to be happening here — are we going to be kissing with masks? What is the protocol?’” Crawley recalls while speaking to The Hollywood Reporter. “But once I spoke with everybody and got the piece of mind that it will all be safe and healthy and OK to proceed in a natural way, I didn’t have any fears.”

Indeed, The Bachelorette moved ahead — but it was going to look very different. Instead of a season filled with travel and the Bachelor Mansion, Crawley’s cycle was filmed in a bubble at the La Quinta resort in Palm Springs, Calif. After quarantining at home, the cast and crew traveled out to the resort, where they remained in isolation until they were cleared after multiple COVID-19 tests.

“Everybody was quarantined away from each other for a certain amount of time,” says Crawley of the on-set safety procedures. “The masks, the health protocol; everybody really did go above and beyond. They made sure that every box was checked.”

And that included Crawley’s 31 contestants. Tuesday’s premiere showed some of the men’s isolation diaries as they traveled in N95 masks and quarantined at the resort. By the time of their final nasal swab test, they shared a collective excitement about being able to enjoy simple liberties, like walking around the resort mask-less and being able to actually date Crawley in person. (As the show continued, they would undergo routine testing and temperature checks.)

As a result, the first impressions when the men get out of the limo to meet Crawley appear more genuine than in prior seasons. One of the men offers her a moment to take a deep breath together; another wears a T-shirt sporting her dogs. There are still costumes and props galore, but the gestures made are overall more personal. “Having everybody go through what they went through to be there was that extra confirmation of, ‘You really must want to be here,'” she says of the contestants not only leaving jobs and families behind, but also quarantining and undergoing COVID testing. “It was an appreciation I think we all had.”

And one contestant, Dale Moss, makes a first impression that Crawley can’t shake. “I knew it,” she tells the camera. “I definitely feel like I just met my husband.” Harrison even interrupts the limo brigade to ask her to elaborate. She says, “With Dale, everything else went dark around me. I don’t even know what I just said. Did I sound OK? Obviously, I’d like to meet everybody, but man… when Dale stepped out of the limo, it took my breath away.”

Now, speaking to THR, Crawley says that meeting Moss confirmed the assumption she had made about him by going through his social media before the show. Since ABC had announced some of the cast before shutting down production, Crawley was in the rare position of being able to snoop on some of her guys through their online footprints.

“I didn’t know who exactly was going to be getting out of the limo, but having the chance to look back, Dale was one of the guys that I completely aligned with when it comes to what he was putting out there on social media,” she says of Moss (pictured below), who was on ABC’s initial cast list. “He was talking about family and being at home and the realness of it, versus taking COVID quarantine lightly and partying or being around friends. I saw a lot of that from a good amount of the guys, but Dale was someone who was really respecting the time of solitude and I aligned with what he was doing at the same time. So when I met him, it was like [takes a deep breath] — there was that connection that I felt like we would have by seeing his social media.” 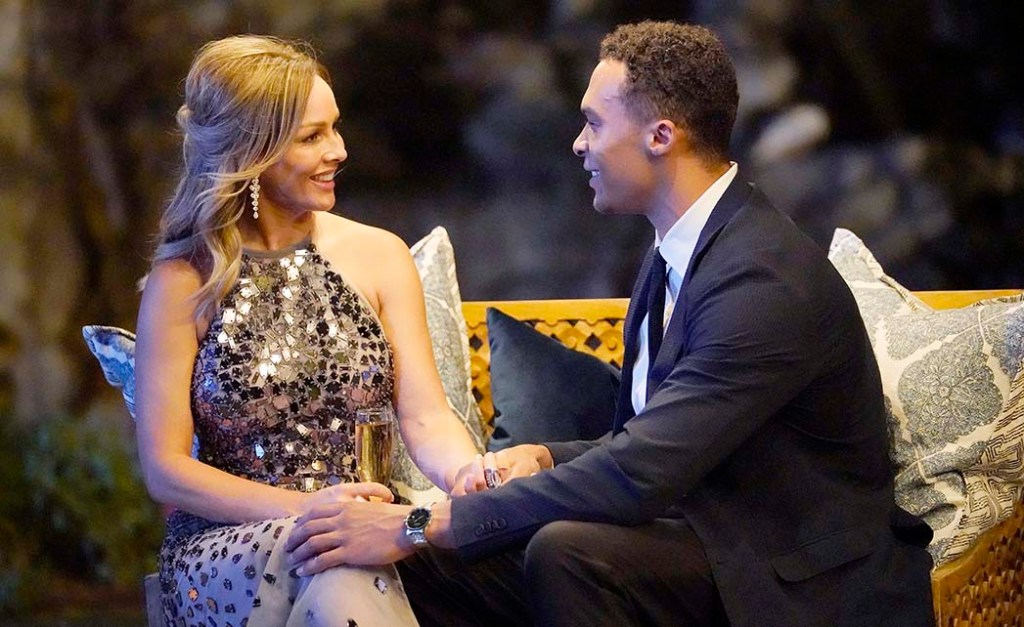 The coveted first impression rose also ends up going to Moss. Throughout the show’s history, the Bachelorettes have a good track record when it comes to giving their eventual winner that first rose. “I’ve talked to a couple of the other girls and they said, ‘Whoever gets the first impression rose, it’s very telling,'” she says with a laugh. What attracted her to Moss? “Among all the craziness and chaos that the night brings, when I was with Dale it was just easy. And every moment that I had with him, within that chaos, he was very calming. I can be high energy, but he brought me down to a level of peace that night.”

But the multiple trailers that are shown throughout the premiere indicate that Crawley’s road to a happy ending will be bumpy at best. In future footage, Harrison tells Crawley that she has “blown up” the show and one contestant is seen asking, “Do we get a new Bachelorette in here?”

Despite filming in a bubble, news still leaked about the drama ahead. The reports, stemming from franchise blogger Reality Steve, indicate that Crawley ends her journey early after finding love, and another past contestant is brought in to finish the show. And even though the trailers heavily lean into what seems to be a major shake-up, ABC and Warner Bros. haven’t commented. “Some of it’s true; some of it’s not true,” Harrison has told THR about the reports. (“In the 18 years I’ve been doing this show, we’ve never dealt with anything like this,” the host teases in one trailer.)

As for Crawley, this is what she has to say: “I can promise you I did not leave early. I stayed for my entire journey and the entire process for what worked for me. Whether or not there are spoilers out there, I think people will be pleasantly surprised to see what they don’t know.”

What Crawley does cop to is breaking the traditional rules of the show, a trend that has resulted in unpredictable endings for recent seasons of The Bachelor and The Bachelorette.

“For me, it was about following my gut, honoring my truth and what I’m looking for and saying no to the things that didn’t serve me, or didn’t serve the purpose of why I was there,” she says. “Each person as the lead, it’s a case-by-case basis of what works and it’s not a cookie-cutter formula on how to find love. There’s never a formula to it, so we do what works for us best.”

And production, she says, worked with her to help her find what she was looking for, even if it meant things might be done differently once again. “The whole purpose of this show is to find love. [Their] goal is to facilitate people falling in love. Although it is a show and there is drama, I do not think they would be as successful as they are if they did not facilitate that,” she says. “They would do anything to help make that happen and they did — they did give it their best and put all the energy into it. They were making it work for what served me.”

While Crawley won’t say whether or not she found love in the end, she says the experience was worth it, and she’s hopeful about the future, both for her and for the franchise as a whole. Her season will lead into a historic cycle when Matt James becomes the first Black Bachelor for the 2021 season.

“The choices [the franchise makes] from here forward, that they are practicing and really implementing, is creating change within the franchise to just be inclusive with everybody,” she says after her experience. “I love that they are doing that and I think one of the first steps is to pick someone like me, to be honest, someone who doesn’t look at skin color. For me, it’s what’s on the inside that matters. I’ve always felt that and I’ll always feel that way, and there needs to be more of that. More people who look inward for love and base it off of that, versus exterior factors.”

To sum up her journey, she adds: “It’s hard to put yourself out there, let alone for the world to see. So, just by doing that, I made myself proud and hopefully made my family proud, too.”

The Bachelorette airs Monday nights at 8 p.m. on ABC.

Chris Harrison on Pulling Off Clare Crawley's Season: "We Don’t Want It to Feel Like COVID-Bachelorette"