“We knew what we were getting into, but we couldn’t help it,” says Ryan Watson, the Emmy-winning stunt coordinator for the series, which saw its second season bring a “bigger scope of action” with harder fights, more complex sets and higher-flying villains. Watson, who won an Emmy for his work on The Mandalorian‘s first season and handled stunts on Wonder Woman and Batman v Superman: Dawn of Justice, says that despite his ample experience with big-budget projects, “I call this a black-belt level of moviemaking because it’s just so fast and it’s so intricate. I’ve never done anything this intricate and this vast.”

A prime example of that comes in the season two finale, when The Mandalorian and Moff Gideon (played by Giancarlo Esposito) face off aboard an Imperial ship after Gideon’s Dark Troopers have captured Grogu. Brazilian stuntman Lateef Crowder takes over for Pascal during such scenes; he is trained in a martial arts style called capoeira, which combines elements of dance, acrobatics and music, and allows him to “have the ability to duck extra far,” says Watson. “We watched the playback and you would see how the sword went by and he’s moving his head and it’s missing by 2 inches, and that’s a testament to him.”

That fight, which the coordinator says is one of his very favorites, also saw Esposito bringing his A-game, and resulted in a battle that was “literally real.” During the monthlong rehearsals, Crowder and Esposito had been sparring with bamboo swords in place of Gideon’s signature weapon, the Darksaber, because it had not yet been constructed by the prop department. Then, during filming, while the cast typically fights with half-swords for safety and visual reasons — with the full weapon added in later with CGI — Esposito’s half-saber broke.

“We had to end up using the full sword, which makes the top end even heavier, so now the swings are a little bit harder. The intensity of that fight was probably the highest of both seasons. Giancarlo brought some real intensity to that fight,” Watson remembers. “Lateef finished one time and was like, ‘That was like a real fight.’ Lateef was truly ducking for his life.”

The fight was so intense that it resulted in breaking two or three of the swords “completely, like the Darksaber went down. And they’re very expensive.” 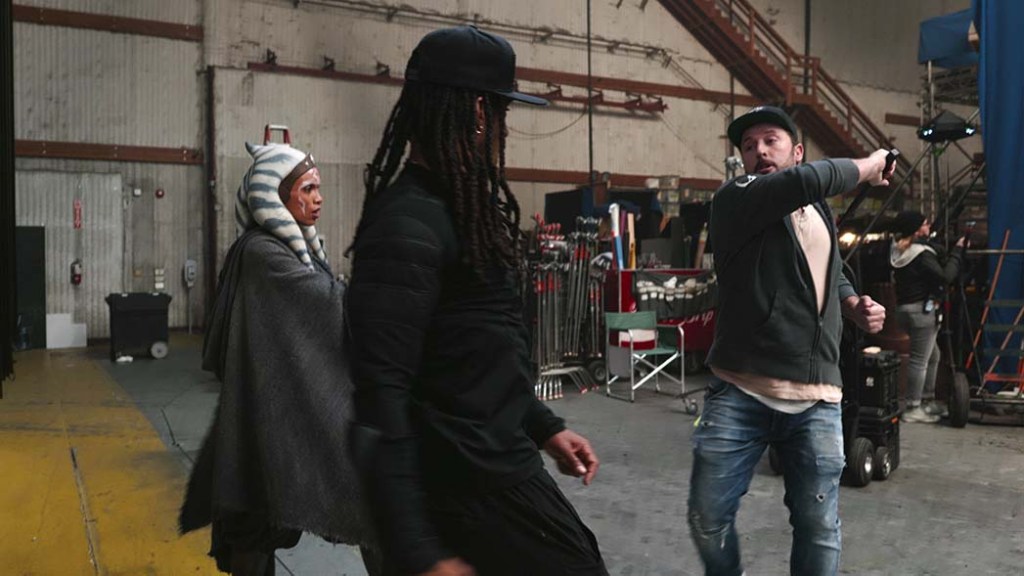 That same episode also saw Fennec Shand (Ming-Na Wen), Bo-Katan (Katee Sackhoff), Koska Reeves (Mercedes Varnado) and Cara Dune (Gina Carano) taking on dozens of Stormtroopers with “a smorgasbord of all the different weapons.” Though he says those scenes, with fighting happening in different places with so many people, are easier to coordinate than a one-on-one scene, it can be very intimidating and confusing for all involved with “all the sets and the costumes and everything. It’s probably the highest level of stunt work when you add those factors into it.”

And another uniquely Star Wars challenge: how best to handle a lightsaber.

In the fight between Ahsoka Tano (Rosario Dawson) and the Magistrate (aka Morgan Elsbeth, played by Diana Lee Inosanto) in the season’s fifth episode, the two face off as Tano wields a pair of white lightsabers. Watson says the battle was the most high-pressure of the season because of fan expectations, and resulted in long conversations with showrunner Jon Favreau and director Dave Filoni about lightsaber styles, opting for clean and traditional rather than flowery. 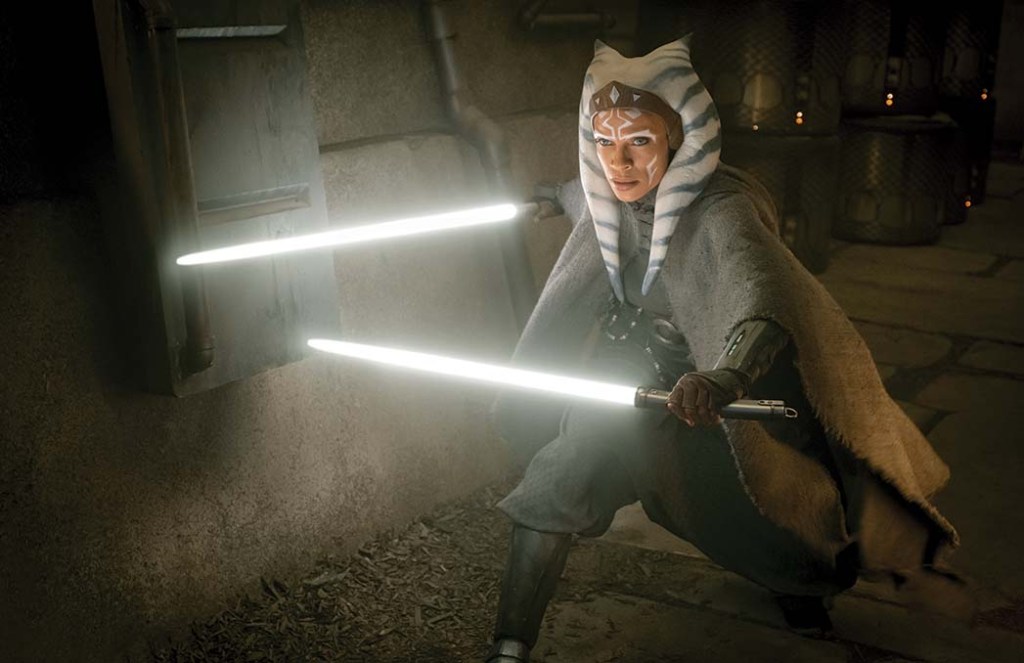 Taking inspiration from Akira Kurosawa’s films, “we wanted to keep it really old-school samurai, but still entertaining enough to where it has more than two or three moves,” Watson says, aided by the fact that Inosanto — the daughter of Dan Inosanto, who helped Bruce Lee develop his fighting style — is a skilled martial artist in her own right. Watson incorporated Filipino martial arts style kali into the moves and gave extra thought to how one would actually fight with a lightsaber.

“That changes a little bit of the dynamics. With a samurai sword, you can touch the blade and you’re not going to get hurt,” Watson says, joking that the lightsaber is “like a bug zapper.”

He adds, “That’s why that fight feels very clean and very direct. There’s not a lot of wasted movements — when they start to fight, they explode. It’s from stillness to 100 miles an hour in the blink of an eye.” Watson also credits Dawson’s and Inosanto’s natural sword abilities, and says stunts are such an important part of the show that a person’s experience with weapons and fighting is considered as part of the casting process.

And though CGI does play a significant role in the show, Watson says that from jetpacks to space vehicles and everything in between, “we had to do all this stuff,” like the episode seven scene that saw Migs Mayfeld (Bill Burr) driving a transport into an Imperial mining facility while The Mandalorian fought off pirates on top of the speeding vehicle. The coordinator cites this as the most difficult stunt of the season, with stuntmen hanging from wires and filming both with the transport moving and with it stationary, for more intricate choreography.

At the end of the day, though, Watson says, all the stunt work means nothing if the actors don’t make it authentic.

“You can train the moves and have them down perfectly, but if you don’t have that acting backing behind it and the intensity that you would have in a fight — that’s probably the most tricky thing,” he says. “You have the costume on and all these different cameras in there … It’s a very, very tough thing to act and to get through the choreography knowing all these different changes that you have to do at that moment, and where the camera is for it to look like a real hit.”