To put it mildly, 2020 has been a complicated year, dominated by the unexpected instability spurred by the novel coronavirus pandemic. Now, with Election Day just about here, the major TV networks are preparing for an evening (or multiple days) of coverage that could be just as complicated.

“This is an incredibly complex election. This is an unpredictable election, and we have what will be absolutely, almost guaranteed, a record number of voters,” CBS News president Susan Zirinsky tells The Hollywood Reporter. “But what has to be acknowledged is that it is happening in what has been one of the most cataclysmic years of events. You have COVID, you have systemic racism cracking open this country, you have police injustice, and this is all happening in the midst of what is a very dramatic, important presidential election, with two of the most different candidates than you could possibly have put head-to-head. In the context of this enormous backdrop of things happening, it is really intense. … This is going to be wild, buckle up.”

Election night is all but certain to be the biggest television event of the year (with only the Super Bowl giving it a run for its money), and the uncertainty derived from the extensive early voting, mail-in ballots and the pandemic have raised the stakes even further.

With so much uncertainty, everyone is staffing up for what could be multiple days of rolling coverage.

“We are going into election day with a ton of preparation, but very few preconceptions,” says NBC News president Noah Oppenheim. “We want to be prepared for every contingency. We think it is very possible we will have a call at some point that night, possibly in the wee hours of the early morning the next day, or it may take many days after that. We need to be ready from a personnel, staffing standpoint to handle all of those possibilities.”

“I think this is obviously a very unique election, it is the first-ever election that has taken place during a nationwide pandemic, and that introduces just a degree of uncertainty into the entire proceedings that we haven’t seen before,” says ABC News president James Goldston. “We have put elaborate plans in place to essentially staff this and run with this for as long as is necessary.”

While a dragged out resolution remains a strong possibility, some covering the night are hoping for some clarity Tuesday. 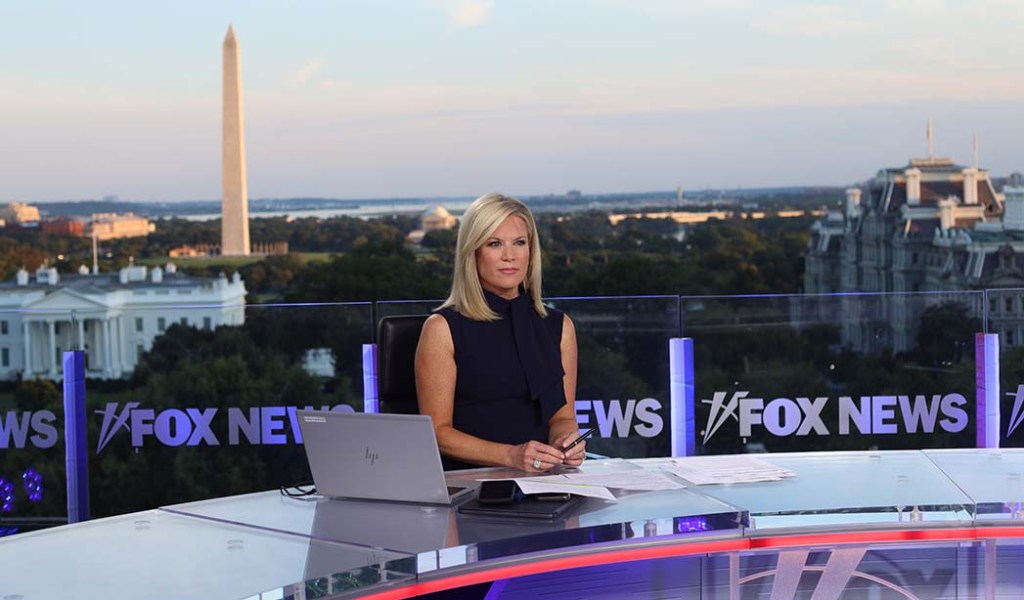 “I think that everyone is prepared for a long haul, though there is at least a hope that there is a faster resolution or understanding of what is going on on election night. It would be a relief for the country at this point,” says Fox News anchor Martha MacCallum, who will be anchoring her first presidential election for the channel alongside Bret Baier. “We are just trying to plan for all the different options. I have a lot of faith in our decision team, they have done an excellent job over the course of all the elections we have covered together, and they are gaming this out in every way that they can.”

That, ultimately, is the sticking point for the networks and anchors. There could be enough information to make a projection on election night, or it could come down to Pennsylvania and Michigan, which may take days to report the full vote tally. Those variables are impacting how the networks are thinking about their coverage of these states.

“I think it is really important to not put your thumb on the scale in either direction, to not get wedded to how you feel the night is going to go, because we don’t know,” says Good Morning America and election anchor George Stephanopoulos. “It is very possible that it will take several days.”

“We have been billing this as potentially election week, or even beyond that, for a while with our viewers,” adds fellow ABC anchor Linsey Davis.

“I liken it to a baseball game. We are in the third inning, we know the score, they announced it, but there are multiple innings, and that score can totally turn around,” Zirinsky says.

Indeed, even the language viewers may be used to hearing will be different this year.

“A term that you are not going to hear a lot of this time around is ‘precincts,’ because we are going to be looking at the percentage of expected vote, and that is an acknowledgement of the way people are voting, with a heavy amount of early votes,” says NBC Nightly News and election night anchor Lester Holt.

Complicating things further are the campaigns themselves, which are incentivized to spin things their way, or tout a lead in a state that could be illusory given the ballots outstanding. President Trump in particular has sent plenty of tweets sharing his desire for the networks to project a winner on election night.

“I don’t think we can censor one candidate, but we have to make sure we can fact-check and put statements in context and make sure people understand that this isn’t the final word necessarily, and this is just going to have to be our job on Tuesday, if that comes to pass,” Stephanopoulos says.

“That is certainly one of the many eventualities we prepare for. If a candidate wants to get out in front of the camera and make a claim for victory, that is certainly within their right,” Holt says, adding that the network is prepared to put any claims in their appropriate context.

“We are prepared to aggressively fact-check any effort by anyone to mischaracterize the status of the race or the results of the race prematurely,” Oppenheim adds.

And then there is COVID-19.

The virus and pandemic have upended all television production, forcing the networks to approach 2020 differently than they ever have before.

ABC will utilize “studios all over New York and Washington” in order to get its entire team on-air in a safe, socially-distance way, including turning The View’s set into an election night studio.

“We still have 90 percent of our workforce working remotely, and election night is not going to be much different,” Oppenheim says.

Indeed, every channel is expected to use enhanced safety procedures, from rapid testing to distanced anchors and limited-capacity control rooms.

Ultimately, the TV news divisions say they are aware of the power and responsibility their coverage brings, and the need to get it right, not necessarily first.

“We don’t succumb to competitive pressure on nights like this,” Holt says. 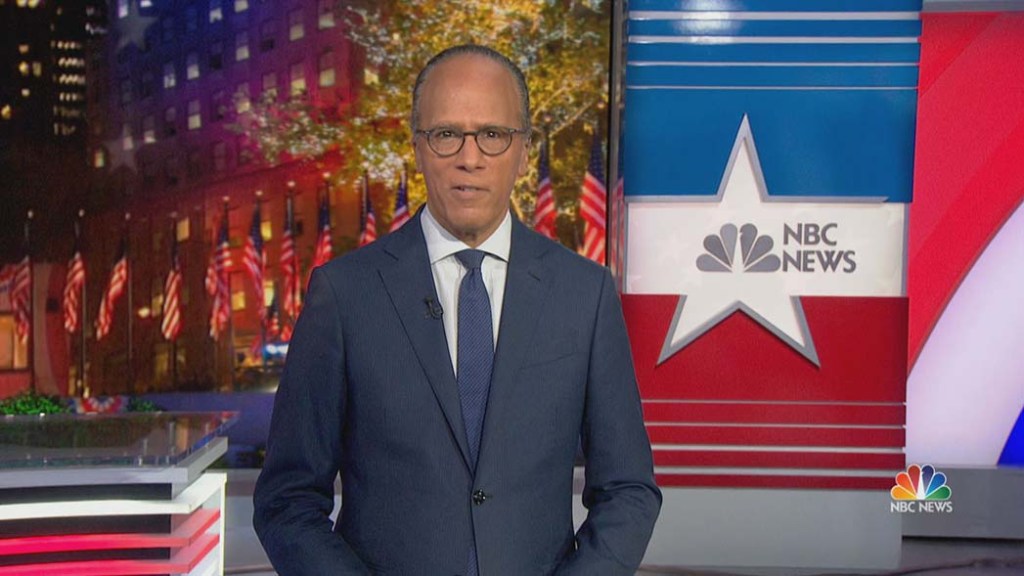 “You feel the weight of the responsibility that the American people are looking to explain to them what is going on,” MacCallum says.

“I certainly sense the responsibility, and I think we have an extraordinary team, and we all know that it is going to be really important that we don’t get ahead of ourselves on election night,” says ABC World News and election anchor David Muir. “We are having a conversation on election night with a country that is exhausted, that is concerned about the pandemic now surging again, an economy where tens of millions are still without work, about politics.”

At the end of the day, the networks and lead anchors are approaching election day with the singular focus of informing viewers with what they know, when they know it. The pundits and candidates may plead their cases, but the voters get the final say. 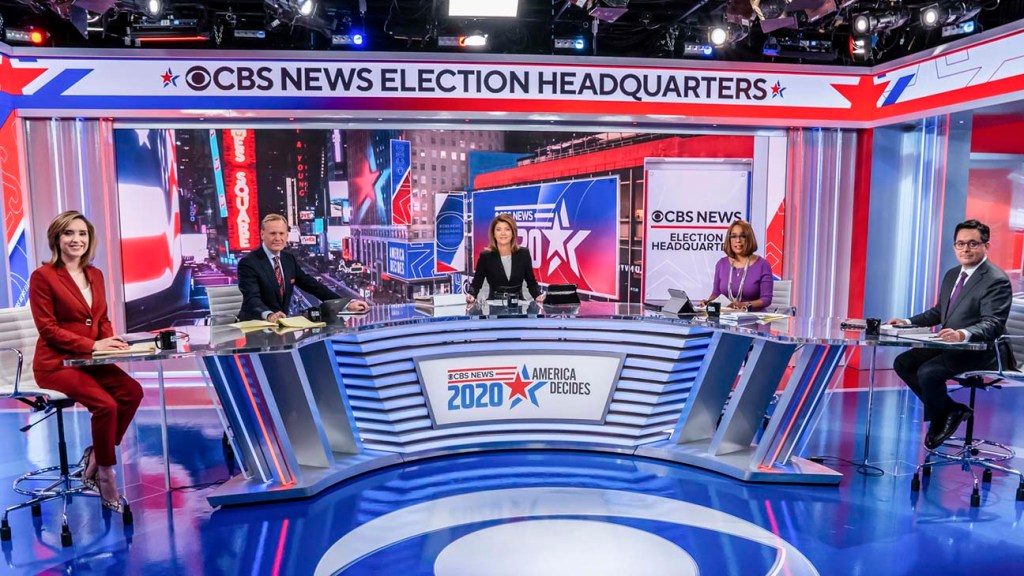 “Once we start getting data, the spin won’t matter much. The data represents the voters’ voices and that rules in the end,” says CBS News senior political analyst John Dickerson. “If there is a clear broad signal then the spin from the campaigns won’t matter. Figuring out what’s going on as the night unfolds will be difficult, however. It’s always difficult, because elections are always unpredictable, but you’re compelled to learn about what’s going on because every bit of information is interesting. It tells us about the country, key groups who feel shut out from the American dream or who feel let down by their leaders. After the years of punditry, we finally get information. The only hard part is seeing that information clearly in the moment, because sometimes the results in various counties or among various voter groups are murky.”