Tiffany Haddish marked her 40th birthday on Tuesday in a big way, celebrating both her new Netflix special Black Mitzvah while also throwing her own version of the Jewish coming-of-age ceremony.

The comedian took part in the reading of the biblical text and celebration a little later in life than a real bat mitzvah, going through the ritual of reading from the Hebrew biblical text in a private gathering of friends and family earlier in the day, followed by a star-studded, red-carpeted party, hosted by Netflix, that night at SLS Hotel in Beverly Hills

The birthday girl arrived wearing a diamond Star of David necklace that she had “just gotten like an hour and a half ago” from friend Barbra Streisand, who had the gift delivered to the hotel after wishing Haddish a “Mazel Tov” on her bat mitzvah. Haddish joked that while for her special day she just wanted “everyone around me to be joyful and happy,” she also hoped for “a date with Giancarlo Stanton, No. 27 from the New York Yankees,” who later showed up at the party.

The comedian also spoke about the importance to her of exploring her heritage and religion through her comedy special, which aired that night, and birthday festivities, telling reporters that “as black people, when we were brought here to America, a lot of our heritage was stripped from us, and me being able to do my DNA test and find out who I really am and what I am and learn more about my people and the heritage, I feel like it’s very important to share that with the world,” said Haddish. “We can all start digging and find out who we are and what we are and start having some honor and pride in ourselves, which will be contagious and live throughout history.” 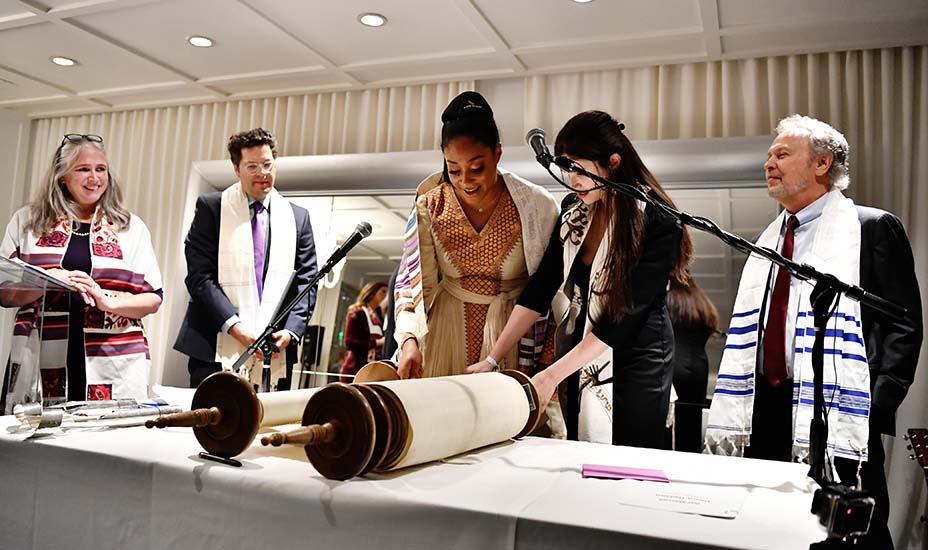 Silverman, who walked the red carpet with her sister and niece, revealed that her sister Susan, who is a Rabbi, led Haddish’s bat mitzvah ceremony, of which she said, “I couldn’t believe, it was so funny,” while throwing out her endorsement of the star’s “amazing” new special.

Fellow friend Nealon — who said he has known Haddish for more than 20 years, when she would do gigs at L.A. comedy clubs while still being homeless — said that watching her go through the Jewish ritual “was really moving. She’s so committed to it and I saw a real sense of belonging for her, where I think she didn’t have that for a long time. This was kind of like making it official for her,” while also celebrating her “energy, honesty and sense of humor.”