In the second season of her Amazon series One Mississippi, Tig Notaro uses Robert E. Lee to segue into an ongoing conversation about sexual assault.

In the semi-autobiographical traumedy, Notaro’s character, also named Tig, is chatting with her radio show producer Kate (played by Notaro’s wife Stephanie Allynne). Tig returned to her Mississippi hometown after the sudden death of her mother last season, and the pair are blown away that their city of Biloxi celebrates the Confederate leader on the same day the rest of the country honors the federal holiday of Martin Luther King Jr. Day. In Biloxi, the day is known as Great American’s Day.

“Isn’t that so insane? I mean, those guys didn’t even have the same birthday,” says Kate while the radio show is broadcasting to Biloxi listeners.

“You know, with all the discussion about great men, not-so-great men, it’s reminding me of this guy Steve who seemed like he was not great but was actually kind of great,” says Tig. “It’s essentially a story about the time that I should have been molested, but was not.”

After telling her childhood story, Kate shares her own stories of the times she, too, was almost molested, sparking a debate between the pair over Kate’s denial about being violated in her past. It was revealed at the end of last season that Tig had been molested by her step-grandfather throughout her childhood, and the topic of sexual assault threads together a courageous sophomore season.

“I think there’s something for everyone in this season because the story has come from a lot of different places,” Notaro tells The Hollywood Reporter of leaning on her fellow writers for stories. The first season was largely inspired by the worst year of her life, when she lost her mother and was diagnosed with cancer.

Notaro had relayed the series of 2012’s tragedy of events in a legendary stand-up routine, “Hello, I Have Cancer,” which made her an overnight sensation. The comedian, who went on to beat cancer, continued to use her life as inspiration for her art, also documenting her and Allynne’s journey to becoming parents of twins. Now, however, she reveals that she has been living in chronic pain for the last five years as a result of the bacterial infection she also was hit with in 2012.

Below, Notaro explains how she infused comedy and her and Allyn’s personal love story into the second season’s heavy and timely themes, talks about her future plans for the series and gives an update on her health.

Why Tig Notaro Took on Sexual Assault in Her Amazon Series

Last season saw One Mississippi closely mirroring the events of your life and you called it 85 percent real, but said you were ready to move beyond cancer for material. How much of this season is autobiographical?

I have to confess up front that I’m terrible at math, so my percentages might be off here. (Laughs.) I feel like there are elements of the second season that are based on my life, but I would say the writers room really contributed their stories and experiences, more so than the first season. The first season they were helping me set up my story. Even as the first season went on, it became more fictional and I think one you start making a story fictional, you have to go more in that direction because you’ve already done so much that has switched the course.

Do you classify it as a dramedy, or a traumedy?

I haven’t really classified it as anything. I feel like people in the press have called it that and I’ve been like, “Sure.” Some people call it a dramedy, others a traumedy. But we definitely have comedy in there.

The first episode sees Biloxi honoring “both sides” on Great Americans Day, which Tig responds to by asking, “What, good and evil?” How did you react when you saw Trump’s Charlottesville reaction?

The whole thing has been horrifying. Absolutely horrifying. We started filming this season in May and June.

Did you make edits once you started filming, considering how timely the season is?

No. For the most part, we stuck with the script that we had written a couple of months before.

Bringing Tig back to Mississippi provided you with this opportunity to explore the South and race relations in a time when the country is divided. Did you feel a responsibility to confront that?

Yes. With the first season, I really wanted to show how not a big deal my sexuality was for me and within my family and town and immediate circle. A lot of people were expecting something to happen, and I wanted the trauma that I was going through to be more of the focus, rather than my sexuality. And then, after we got a second season, even before we knew that Trump would be in office, it still felt like it would be irresponsible to not touch on issues that are going on and that have been going on, rather than just paint Mississippi and life as this beautiful picture always.

The first episode places your characters in our current timeline, saying how the election has given people “permission” to be racist. But Trump is only mentioned by name once in a later episode. Was it intentional to leave his name out of these earlier conversations?

I struggled with it and his name was initially in there more than it ended up being. That was a big debate in the room of how much attention to give this person. There isn’t anybody in the writers room who is a fan, to say the least. I really struggled with it. I wanted to say anything but his name, but there were a couple people in the room that wanted his name spoken and so you choose your battles. I just don’t want the show to be something where if you watch it in 10 or 20 years from now and it’s too time-stamped.

This season is also personal to you by telling Tig and Kate’s love story. Last season ended with a hint that they would be romantic, and this season sees Kate struggling with her feelings since she considers herself to be straight. What was it like to both write and act out a version of your real love story together?

It was a joy, really. It’s fun to rehash and relive it, but in different circumstances and surroundings. And then to sit back and watch the whole relationship unfold and watch ourselves fall in love, it was really nice.

Did either of you have hesitations? [Allynne is also a writer on the show.]

There are definitely moments that we didn’t share. But I think anything that I or we decided to share on the show was coming from complete comfort and confidence and that’s what we want to put out there.

In a past interview with you two, Allynne said she wished she had relatable examples when she was younger. In the show, her character is shown watching The L Word. Are you hoping she’s an example for other women questioning their sexuality or being labeled gay or straight?

That’s a real reality for her, where she says, “God, I wish I was watching this show years ago.” She loves that show. (Laughs.) I hope labels go away. Sexuality, gender, all of it, even to politics, it’s what causes the conflict, ultimately. 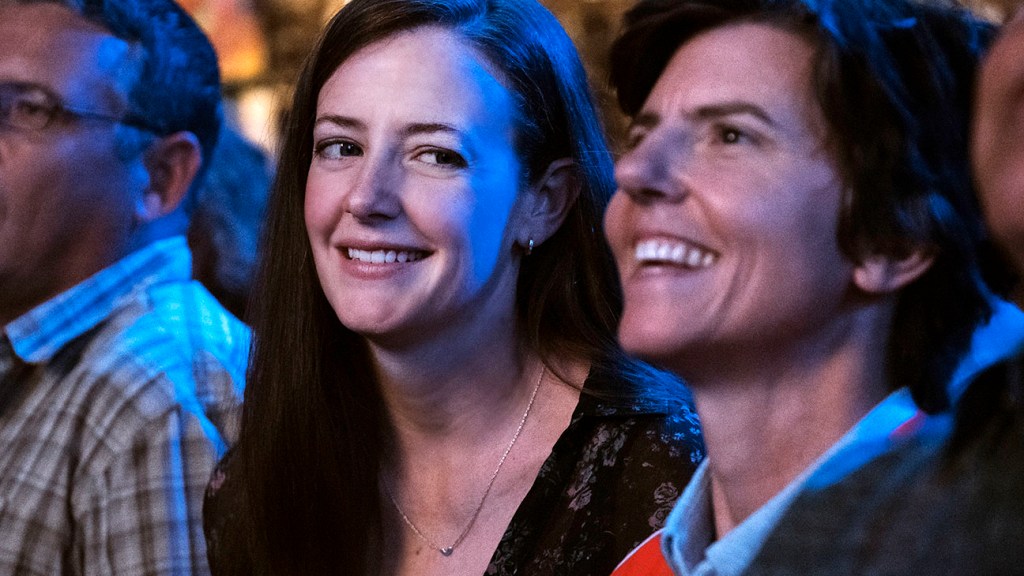 Is the plan for you to do more seasons?

Yes, I would love to have more seasons. Since we’re only doing six episodes at a time, there is just so many more to do that it feels infinitely possible. But I also am aware that the business of Hollywood can make decisions and take sharp left turns, and I’m also OK with that. But my choice would be to do more.

Why is six the number that works, storytelling-wise?

That was originally what the pickup was for the first season and I was more than OK with that because, I haven’t spoken a lot about it, but I’ve been in chronic pain for five years. It’s been hard for me to do really heavy, long workloads. But I have started eating a plant-based diet and I’ve been pain free. It’s a whole different world to be pain-free and to feel like I can take on more. I still want to have time for Stephanie and the babies and stand-up and stuff, but it’s nice to know that if I had to do more, I could. Whereas, I really didn’t want more than six episodes, aside from wanting free time. I physically couldn’t do it.

Were you in that pain when you were writing and shooting this season?

Yes. When I watch in the editing room all I can think is, “I was in so much pain right here.” Or, “This day was the worst.” There have been times that I had to do a minor rewrite where I couldn’t run around in a moment and be seated and have everyone come to the table instead.

What is it stemming from?

Ever since I had [the bacterial infection] C. Diff, I’ve had intestinal pain and problems. My doctors have said this is kind of the case with C. Diff. You can struggle forever and out of nowhere it can clear up. So it had been suggested that I try a plant-based diet and I thought I would try it for a couple of weeks and if there’s no change, the worst-case scenario is that I ate healthy for a few weeks.

It’s working 100 percent. I was pain-free after four days. I’ve always leaned towards eating like that, but I would still sneak some cheese and fish and seafood. I’ve been 100 percent no meat or dairy and I’m 110 percent pain-free. I’ve been doing the diet almost three months now.

What have you been focusing your time on since you’ve been feeling better?

It’s funny. Now I want to do physical things like learn how to surf and random things like that. I’m just way more active and want to try and learn and do more active things than what I could before. After all my health issues, I felt like I had a new lease on life, and now that I can actually come out and say that I’ve been in pain for years and that it’s gone? It’s a whole different world. I had some good days here and there but in general, it was not easy. Running around with the kids, flying around the world and doing 15 hour shooting days, it was a lot. So I took the initiative to try to change my course, and it works. I am forever grateful. Anyone in any sort of pain should just try it.

Tig Notaro: Being Gay Isn't the Focus of Amazon Comedy 'One Mississippi'

The second season of One Mississippi is streaming all six episodes now on Amazon Prime Video. Head back to Live Feed for more from Notaro after watching the season next week.