Tiger Woods was involved in a serious, single-vehicle car accident on Tuesday.

Woods’ agent, Mark Steinberg, said in a statement: “Tiger Woods was in a single-car accident this morning in California where he suffered multiple leg injuries. He is currently in surgery and we thank you for your privacy and support.”

During an afternoon media conference, Sheriff Alejandro Villanueva said Woods was fortunate to be alive.

“There was no evidence of impairment,” but the department is investigating if he was “distracted while driving,” Villanueva said. Woods did not have his blood drawn post-crash, Villanueva said.

Woods’ car traveled “several hundred feet” when it crashed. Villanueva said from the initial investigation, Woods appeared to be going “a greater speed than normal,” but noted it was a downhill area with a curve. Villanueva said there were no skid marks on the ground. Weather was not a factor, Villanueva said. The sheriff would only say Woods was in “serious” condition.

Los Angeles County Fire Chief Daryl Osby noted Woods sustained “serious” injuries. Woods was back-boarded and had splints put on his legs once out of the SUV, Osby said, noting Woods was in “severe pain.” Woods was wearing his seatbelt.

The damage to Woods’ car was described by the Los Angeles County Sheriff’s Department as “major” and authorities said the star athlete needed to be extracted with tools that included an ax. Woods was alert when he was removed, authorities said. Aerial footage showed the car sustained tremendous devastation. The SUV was removed from the scene around 3 p.m. 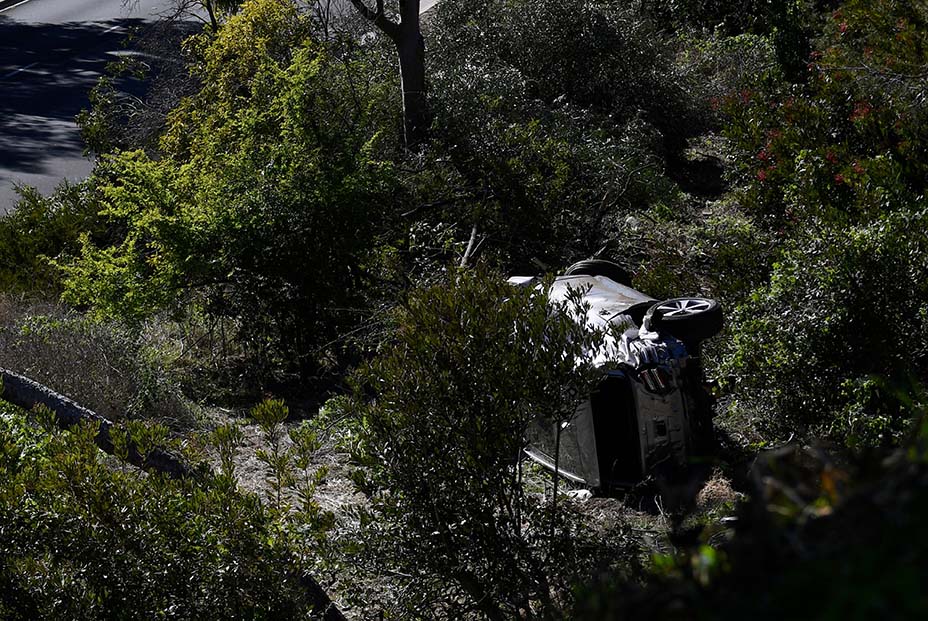 The incident occurred around 7:12 a.m., on the border of Rolling Hills Estates and Rancho Palos Verdes, the sheriff’s department reported. “The vehicle was traveling northbound on Hawthorne Boulevard, at Blackhorse Road, when it crashed,” reads a statement from authorities. Woods was taken to Harbor-UCLA Medical Center by ambulance.

The 45-year-old Woods was in California for a two-day content shoot with Golf Digest/GOLFTV after serving as host for the PGA Tour’s Genesis Invitational, Golf Digest reported. David Spade on Monday shared a picture of the two, writing on Twitter, “Golf lesson with this guy today. And you know what? He’s not bad… He picks things up very quickly. Good listener.”

Golf lesson with this guy today. And you know what? He’s not bad… He picks things up very quickly. Good listener pic.twitter.com/KinEAGcEKU

Social media has been flooded by fans, stars and professional athletes wishing Woods a speedy recovery.

“Prayers up for the GOAT @TigerWoods who was in an accident this morning. Was just with him yesterday. Don’t take not even a MOMENT for granted! I know you’re good because your Tiger within is a beast!!!” wrote Jada Pinkett Smith.

“Praying for my brother @TigerWoods as we all anxiously await more news. Thinking of him and his entire family,” wrote former big leaguer and current commentator Alex Rodriguez.

The crash investigation is ongoing.

A media conference will be held at 3 p.m.