[This story contains spoilers from the two-hour series finale of NBC’s Timeless.]

The NBC time travel drama managed to cheat death twice, coming back for a second season after being canceled and then, a year later, revived for a two-hour wrap-up movie after being brought back from the dead, again. This time, though, is really, definitely, probably the end, co-creator Shawn Ryan told The Hollywood Reporter about Thursday’s Christmas-themed episode.

The two-hour adventure saw Lucy (Abigail Spencer), Wyatt (Matt Lanter) and Jiya (Claudia Doumit) travel back to the 19th century California gold rush in an attempt to stop the evil organization Rittenhouse from carrying out its evil plan, but it was actually the formerly evil Flynn (Goran Visnjic) who managed to prevent Rufus (Malcolm Barrett) from dying (the character was killed in the second-season finale).

In the second half, the Time Team traveled to 1950 North Korea, where they managed to reunite a Korean family just before U.S. troops left the country and war broke out. Flashing forward to 2023, Wyatt and Lucy were happily married (with twins), Rufus and Jiya were happily together, and the team reunited to travel back to 2014, where Lucy gave Flynn the copy of her journal that started the whole adventure.

Below, Ryan talks with THR about pressure to provide the show’s passionate fans what they wanted in the finale, the importance of giving Lucy and Wyatt a happy ending and whether it’s possible that Timeless could get revived for a third time.

Timeless has a very passionate fan base that is definitely a huge reason why you were able to cheat cancellation multiple times. How did it feel to know that people were so invested in its future?

It’s very humbling. When you write for television you want people that feel as passionate about the show as you do watching it, and that’s not always the case, even if they enjoy it. In this case it really feels like the fans are almost more passionate than us. Not that we’re not passionate — we are! — but it really is amazing the lengths that they’ll go to to fight for the show.

It really has an impact on the way that we made this finale, because from the writers, to the actors, to our director, to our producers, there was a real sense of, “This happened because of the fans, we’re continuing to make this because of the fans and we’ve really got to make this good.” This is not such a cute story if we make a piece of crap at the end of this. So it was really a motivating factor to try to get every moment, every scene really right. People will judge for themselves whether we did or not, but certainly our intention and our efforts were, “This has to be as good as we can possibly make it or otherwise we’re cheating the fans who worked so hard and sacrificed so much to give us this opportunity.”

Once you knew you were coming back — again — what did you need to definitely include in the episode?

We had save Rufus. Can you imagine the fan backlash if we hadn’t saved Rufus? We had to bring Flynn’s character full circle. We had to address the Lucy/Wyatt, Lucy/Flynn love triangle one way or the other. We needed to address the idea that even when Rufus and Jiya get back together, there is something that’s changed since she had been stuck in the 1880s for three years. She had changed a lot in the episode that aired back in March, and I think we needed to deal a real death blow to Rittenhouse.

Eric Kripke, Arika Mittman, Lauren Greer and I — it was the four of us that were working on this — we wanted to feel a real sense of victory. I know people are sad and like, “We don’t want it to end, we don’t want this to be the finale,” but one of the advantages when you’re writing something [like this] is that you don’t have to hold stuff back and say, “Well, we’ve got to make eight more episodes after this so we can’t really resolve this.” You can really dive in and resolve things with Jessica, and resolve things with Emma and Rittenhouse. So that was all important, and we wanted to, selfishly for each of our seven series regulars, make sure that they all had specific great moments for their characters. 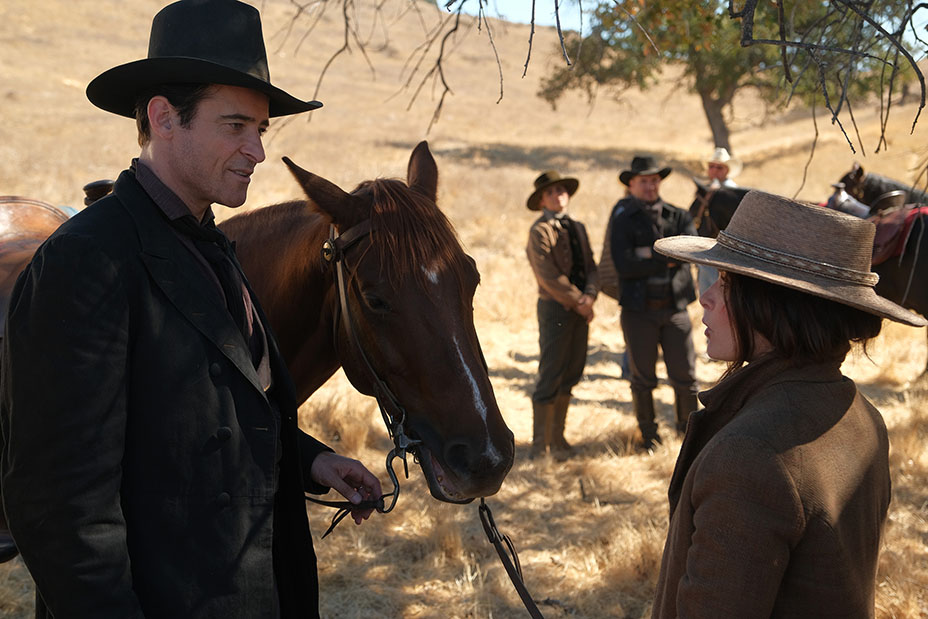 How did you go about picking which eras the Time Team would travel to in the episode? Did you think about current politics at all and pick places that would feel extra relevant today?

Well, there’s two different time periods, so it was two different decisions. The Korean one was actually the first one that we came up with, and really it was born out of a request from NBC when they picked up the movie to do something that was Christmas-themed. They had figured out that it was going to air sometime in the Christmas season, and so we were looking for historical events that happened at Christmas. It took a while to find this, but when we started digging into this historical event that none of us had really heard of before and we saw the sort of beauty of that story and the way that it could affect our characters, that was sort of a no-brainer.

It took a little bit longer to come up with the 1848 gold rush, but ultimately what sold us was the idea of meeting this Joaquin Murrieta character and the parallels that he has with Flynn, so that Flynn can see some of the horrors of his past actions in the reflection of Joaquin in a way that motivates him then to sacrifice himself for the greater good, and to help Lucy, and to help the whole the team and to stop Rittenhouse. We always are looking for time periods that are actually going to allow us to tell stories about our characters, and those were the elements that ultimately led us to the miracle of Christmas story in Korea in 1950, and the 1848 gold rush story. It allowed us to tell these really important character stories.

Flynn sacrificing himself to save Rufus almost seemed like the only way you could’ve gone because it really was a perfect way to redeem his character and bring Rufus back. How much back-and-forth did you have about it?

We certainly talked about it. It wasn’t the first thing that came to mind for us, but when it came to mind and we started talking it through, it made a lot of sense. And then we were sad that we had no more Flynn in the movie, but Eric was always insistent that at some point we had to show Lucy giving Flynn the journal in Sao Paulo, Brazil. We realized, oh, well now if we could actually sort of see Flynn again and see the origins of this and with Lucy’s speech about how maybe he’s the greatest hero of them all, it really made everything come full circle for us in a very beautiful way.

When you tell these finale stories, whether this is an NBC finale or whether this is ultimately a series finale — we never really know with our show — you want to give yourself the license to really go big and to go big with Flynn here and have it come out of character and have him do it for Lucy, essentially. He knows that she loves Wyatt and if Wyatt were to go back and die, then that’s not going to make Lucy happy. So really it’s an unrequited love and he’s able to use that as motivation to go do this very selfless act. We thought it was beautiful moment for Flynn and thought Goran played it fantastically.

You mentioned this as an advantage, but it could have been a hindrance, too: You do only have these two hours to wrap everything up, so do you wish you were able to build up tension and spend more time with some plot points?

There were some moments or storylines where I thought, “Wow, if we had like four episodes to play this out would have been great,” but pretty early on we adopted the mind-set of making more of a movie here than making 10 episodes of television. Our models here have to be more Back to the Future than Quantum Leap in that sense. I think the total running time is like an hour and 25 minutes. We have this time, and what’s the best usage of this time?

Also, we don’t want this to only be something that can be viewed by hard-core fans of the show. If someone never even heard of Timeless before and they’re flipping around and they come across NBC at 8 p.m., how can we grab their attention and go, “OK, I don’t know everything that’s going on here,” but it’s kind of like going and watching a Marvel movie and maybe you haven’t seen the Marvel movies that have come before it, but you have enough of a sense in what’s going on that you can enjoy that. We just wanted to create something that the people would be able to watch and enjoy.

The endings you gave to Wyatt and Lucy (and their twins) and Rufus and Jiya were very happy, but they were also very feminist — Lucy is a tenured professor who teaches her students about female historical figures, and Jiya is a famous scientist. Was that on purpose?

I think that’s on purpose. Listen, we had two women who wrote this finale. But I’d like to think that Eric and I supported this vision. One of the things we stumbled upon on this show [was that] all of our earlier episodes were about famous people like Abraham Lincoln and JFK, these powerful, iconic male characters. As the series went on we got more and more interested in telling the lesser-known people of history: Women, people of color, people that historically were pushed back to the margins but actually had a big impact. That comes full circle, really, when the last half of the movie focuses on this pregnant Korean woman who is not famous at all. But that doesn’t mean she’s not important. We consider ourselves a show that certainly doesn’t ignore or downplay the famous historical figures that everyone has heard of, but there’s definitely a sense to this show that we wanted Lucy to be a true heroine. Not a sidekick to a hero, a true heroine. Wanted Jiya to have her own license to be a successful woman in 2023, etcetera.

And in the final scene of the little girl coming up with plans for her own time machine, was that you leaving the door open for a potential sequel or spinoff or continuation of some sort?

There’s definitely a door open if someone is interested in opening it further, absolutely.