Continue to The Hollywood Reporter SKIP AD
You will be redirected back to your article in seconds
Skip to main content
July 22, 2021 6:45am

How can both statements be true? The first is rooted in the TV history of the Games, and the second in the reality of viewer habits today. The Olympics have never failed to draw in large numbers of viewers — the four winter and summer Games from 2012 to 2018 averaged close to 25 million viewers across all platforms in primetime. The past two summer Olympics, London in 2012 and Rio de Janeiro in 2016, averaged 30.3 million and 27.5 million viewers, respectively. The Winter Olympics are usually a smaller draw, but 2014’s coverage drew 21.3 million people each night; the 2018 Games came in just under 20 million.

Particularly in the summer, nothing else comes close to that level of audience for that long a stretch — 17 consecutive nights of primetime. The potential audience for consuming all those hours of Olympics coverage, or at least the part that Nielsen measures, has shrunk considerably in the past few years.

In 2016, roughly 86 million U.S. homes had a cable or satellite subscription. At the start of this year, it was 77 million (including on platforms like Hulu Live and YouTube TV) — a decline of 11 percent. As much as anything, the cord-cutting trend will make it extremely difficult for NBCUniversal to match the previous Nielsen numbers.

Other factors, including one of NBCU’s own making, are also working against the Olympics reaching previous ratings heights. NBC Sports is making live coverage of several high-profile Olympic events, including women’s and men’s gymnastics, track and field, and men’s basketball, exclusive to NBCU’s Peacock streaming service as the company tries to grow the platform’s subscriber base. Those events will be featured in NBC’s primetime coverage as well, but they’ll be taped packages.

The time difference between Tokyo and the United States could also play a part. Tokyo is 13 hours ahead of Eastern time in the U.S., and while some event finals — notably in swimming and track — will air live during primetime on NBC and USA, a good deal of evening coverage will be taped. Airing taped events hasn’t necessarily hurt NBC’s ratings in the past, but it’s an open question whether viewers’ increased comfort with streaming, either on Peacock or on NBC’s dedicated Olympics site, will eat into the TV audience.

The good news for NBCU is that sports on TV has experienced a ratings upswing in recent months, with events ranging from Major League Baseball’s regular season to the European soccer championship enjoying bigger audiences. Those telecasts have also featured inperson fans, which most observers of televised sports say makes for a better on-air product.

Under Japan’s COVID-19 protocols, no crowds will be roaring during the Tokyo Games. But that’s at best a secondary concern for NBC Sports, which is fighting larger forces that will likely see its Olympic Nielsen numbers come down. 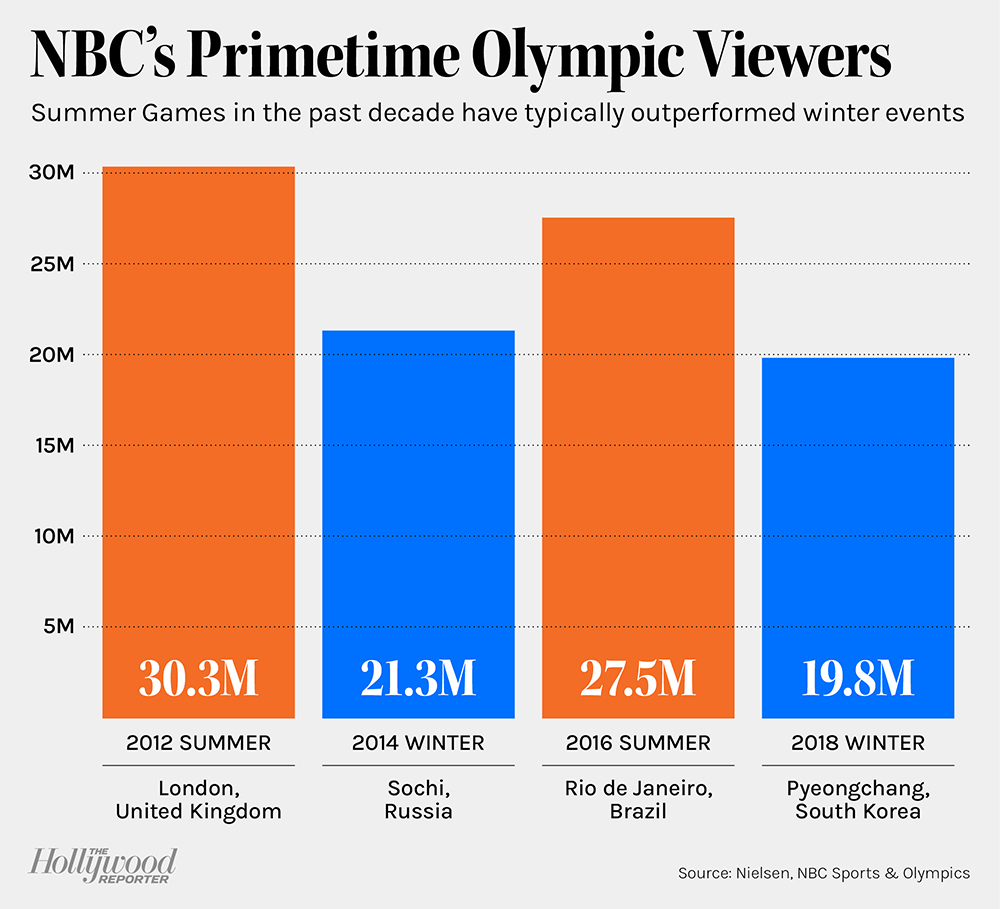 This story first appeared in the July 21 issue of The Hollywood Reporter magazine. Click here to subscribe.