As the restaurant industry and food world at large grapples with an unknown future in the midst of the novel coronavirus pandemic, at least one familiar cooking experience is thankfully at hand: Top Chef, the long-running Bravo reality series following chefs battling it out in head-to-head cooking competitions.

Entering its seventeenth season, the Padma Lakshmi-hosted series embarks on its second-ever full-on All-Stars season, with fifteen previous contestants back in the hunt for the coveted Top Chef title. Based in Los Angeles, the new season (which premiered on Bravo March 19) opens with chefs dropped right back in the fire, with an opening quickfire challenge testing their mise en place (in layman’s terms, setup for cooking) and an elimination round with the Top Chef veterans cooking on beachside bonfires.

In the premiere, Lakshmi and the judges narrow it down to two possible chefs for elimination. Further ahead, the competitor’s identity will be revealed — final spoiler warning here, in other words — but the choice comes down to two of the Bravo series’ heavy-hitter veterans. Speaking with The Hollywood Reporter, legendary chef and veteran Top Chef judge Tom Colicchio promises plenty more brutal eliminations to come in what he describes as a season filled with twists and turns. Read on for his thoughts on the premiere and the season at large (as well as a new digital series he’s headlining for Bravo), but first, his take on the current state of his industry. 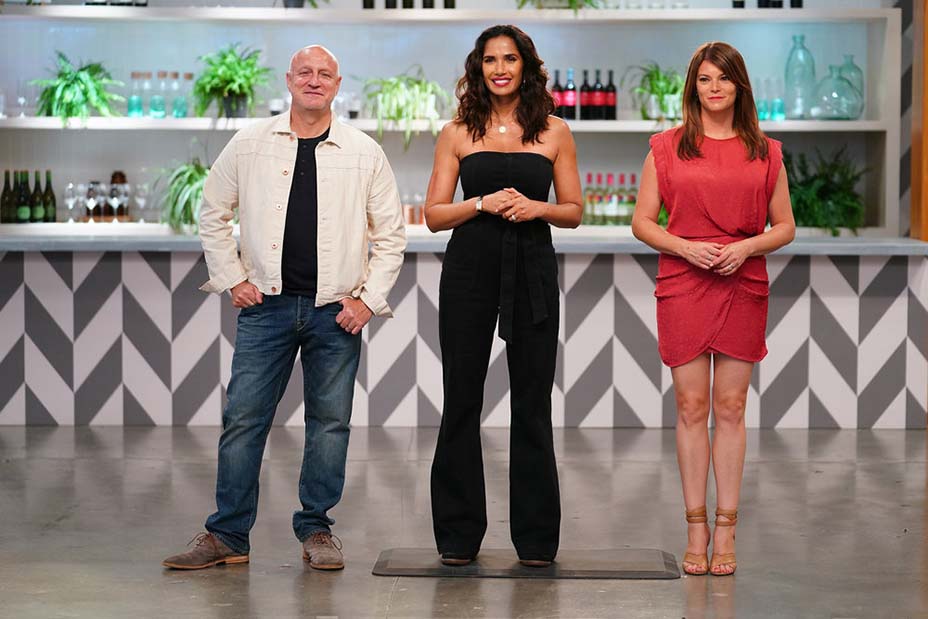 How are you managing getting back into the Top Chef headspace, with all that’s happening right now? Is it strange?

Yes and no. As much as it is… what I’m hearing on my social feed is that people are excited to have something to distract them from the news cycle. I’m a news junkie. I have news in the background all day long. Right now, even I’m finding myself turning it off. It’s just too much. It’s too much. But I think people are looking for a distraction. Usually when I come home from work, I’m watching MSNBC for at least two hours before I go to bed. Now, at a certain point, I’m just bingeing [other shows]. The Plot Against America just started.

Yeah, exactly. (Laughs.) So that’s all good! I play guitar a lot, so I’m spending more time with my instrument. And I started a community [online], not on purpose, that seems to be taking off. I put it out there that there are a lot of people cooking out there for the first time, and if any of them have any questions, to let me know. I started the hashtag #CookingThroughACrisis, and it’s completely blown up. I answered a few question, then I got busy, and then a whole community of people started helping each other out and providing recipes. People are taking pictures: “Here’s what I have in my refrigerator, what can I make?” It’s great to see people finding any way they can to help each other out. Especially now, since we’re all going to be so isolated, we need to find a new way to create new communities. So, I’m monitoring that. But the day is spent trying to figure out where my industry is going. There are a lot of groups getting together trying to figure out what we need from government, and what we’re going to need to patch this up.

The return of Top Chef comes right as people are in need of a distraction; this is a full season of television already in the can while so many productions are currently shutting down. For another, it comes at a time when there’s a real need to highlight the restaurant and food industry — and you’re doing that with some of the best ambassadors from across the history of the season.

I agree with that. And beyond being some of our best ambassadors, they’re familiar faces. That’s really important. We’re not seeing our familiar faces every day now. We’re not seeing our friends. We’re not at work. Having familiar faces you can see that you have a different relationship with than someone who’s broadcasting the news … I think that’s really important. But you bring something else up, too. Yes, we have to dig ourselves out financially, and yes, we have to beat this virus back. The medical profession and scientists are super critical, and our first responders should be applauded, and we need to get all of that done. But there’s another thing we can’t forget: our cultural institutions and just our culture, whether it’s art or music or TV, people need that. It’s an important piece of us. We can’t forget who we are. We can’t let that slip away. Production’s going to be interrupted right now. It’s halted everywhere. There’s this backlog. Having something new coming out right now is kind of important. This is going to provide a brief respite that I think is very critical right now.

What was your experience filming the season, getting back together with all these familiar faces and watching them work through the Top Chef grind all over again?

It’s easy for me to judge people I don’t know, when a new crop of chefs come in and I don’t know who they are. It’s a little more difficult once you get to know them, to be quite as brutally honest as we are. But the neat thing is, to succeed in Top Chef as a chef, experience always helps. You often see that the people who have the least experience struggle a little more. Now these chefs in some cases are ten years past when they were on their season. They have a whole lot more experience than they did back then. But! Because some of them have grown and have multiple restaurants, they don’t have as much time in the day-to-day. They don’t have as much stamina. (Laughs.) Really, this is part athletic, believe it or not. Cooking, especially on this show, often becomes very physical. They start to get tired. We always hear halfway through a season, even a quarter of the way of the season, remaining chefs all going, “Wow. I had no idea it was going to be this hard.” The [All-Stars] chefs knew it was going to be this hard, and even they are like, “I forgot how difficult this is!” (Laughs.) “It’s brutal! I’ve had a baby already! I’m out of shape!” It’s interesting to watch. Because they’ve all been through a season, they all know how it works. They’re more comfortable in front of the cameras. There’s a gamesmanship that they’re playing, but I think it’s fair, because they know how the game is played now. They’ve figured it out. It’s physical, there’s great food, but there’s this mental aspect as they’re working through it as well. 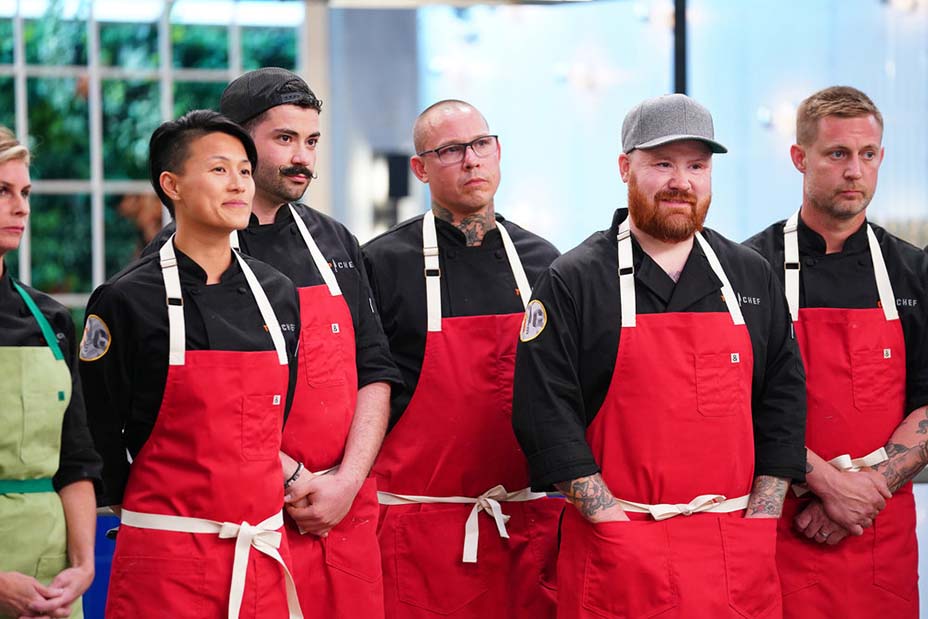 The season opens with a mise en place quickfire challenge, and it highlights a lot of what you’re talking about: chefs having to get back to their roots in prepping artichokes, almonds and the like. You say it’s harder to give these chefs a tough time, but you seemed to have no troubling giving [contestant Angelo Sosa] a little bit of shit.

I wanted to give them all shit. (Laughs.) But artichokes are always tough. I find them easier than some. One of my first recipes that became one of my mainstays, when I was working at a restaurant called Mondrian, was a lobster and artichoke dish. I was prepping back then, so I turned a lot of artichokes. For me, there’s an easy way to do this, but if you’ve never done it? There’s a technique behind it but if you don’t know it, you’re going to struggle through it. Same with opening a clam. Most chefs don’t know how. The first job I had, I opened a clam. It was my first job in restaurants. It’s great to watch. It’s fun to watch them trip up. It was the right way to start, because we see how damn rusty they all are.

In the spirit of familiar faces, we’ll be seeing more of you in a new digital series you’re headlining, “What Would Tom Do.” Can you tell us more about that?

For the last couple of years, I was pitching the show. Finally, they said it was the right season to do it. I get asked the question all of the time: “What would you have done? How would you have [approached a Top Chef challenge] if you were competing?” Well, when I was 26, I would have done okay on the show. If I had to do it tomorrow? No. But people ask me about it all the time. I try to never do the thing where I tell a chef, “Well, I would have done X, Y and Z.” Because I’m not judging them on what I would have done; I’m judging them on what they did. I try not to put myself in that headspace. But I do think to myself, “What would I make in a challenge?” So I wanted to do that as a show, but I wanted it to be fun, and I want it to be breaking the wall. We see the cameras, we interact with the cameras. [Season 16 judge Nilou Motamed] is with me, which is great, and it’s just a blast. There was some debate about whether I would have to do any of this in the time that was allotted to the chefs, and I was like, “No. Stop that, right now.” Sometimes, chefs had eight hours to do something! Do you want to work on a show for eight hours? I don’t think so! I say right up front: “No, I’m not doing it in the time allotted. No, I’m not cooking on a beach. I’m in the studio. I get all of that.” Let’s clear that up right away, because I know I’m going to get a lot of that. It’s a fun piece. It’s neat, because some of the stuff I do on the show is stuff I would never cook.

Right, it just wouldn’t fit [the menus]. So I get to experiment and play around. There are some very cool challenges. My favorite, without giving it away, involves the philharmonic, and that’s all I’ll say.

The first episode ends with two Top Chef greats at the bottom: Joe Sasto and Lee Anne Wong, with Joe going home for his flatbread. It’s a tone-setter: if Joe Sasto can go home first, this is going to be a really tough competition moving forward.

Only one person can win. You need to start looking around at the cast, because only one of them can win. I looked at this cast going in with no idea how they would do. Maybe these six people might be the cream of the crop, but who knows? I have to tell you, I think it’s a great season. There are a lot of twists and turns. It’s interesting how it all played out and how it all goes down. I think it’s a great season. It’s very unexpected. The way people go through things… it always seemed that every episode, there was someone in a crisis and couldn’t get out of their own heads. It happened to one person, and then to another in the next episode. This challenge is more mental than anything else. You watch mentally how people start breaking down and making poor decisions. That’s what’s so cool about this. The twists and turns are great.