Continue to The Hollywood Reporter SKIP AD
You will be redirected back to your article in seconds
Skip to main content
March 5, 2018 6:20am
Logo text

A comparatively uneventful Oscar telecast led the way on TV Sunday night — though updated numbers have the telecast somewhat predictably stumbling to an all-time low.

The kudocast, nearly four hours long, stumbled 19 percent from the previous year to 26.5 million viewers. That’s easily the least-watched Oscars in history, trailing 2008 by more than 5 million. Overnight returns had the lengthy ABC broadcast averaging an 18.9 rating among households between 8 and 11 p.m. ET. Compared to the same stat for 2017, the night the wrong best picture winner was named, that was down a more modest 16 percent.

Last year’s Academy Awards, which earned a 22.4 overnight rating, ultimately fetched 32.9 million viewers for ABC, as well as a handsome 9.1 rating among adults 18-49. Still, those numbers reflected the second-lowest in Academy history. (ABC did not immediately report the adults 18-49 rating for Sunday’s Oscars, and Nielsen won’t widely distribute that information until Tuesday.)

The night was not as political as many recent award shows, with showings of partisanship few and far between. The fallout and response to the exposure of sexual harassment and assault in the entertainment industry was an obvious throughline, and honorees like best actress winner Frances McDormand made stands for inclusivity and representation in the industry. And host Jimmy Kimmel seems to have earned praise for another solid performance during his second consecutive year onstage.

But the writing was largely on the wall for lows, either way. All three marquee events of the U.S. TV calendar thus far — the Golden Globe Awards, the Grammys and the Super Bowl — were off significantly from 2017.

At three hours and 50 minutes, Sunday’s Oscars may have passed last year’s runtime by only one minute, but it managed to rank as the longest telecast in over a decade. Not since 2007 has an Academy Awards ceremony lasted that long.

And it wasn’t exactly a night of box-office sloucher nominees. Though top winner The Shape of Water ($57 million domestic to date) hasn’t exactly been a runaway hit, it certainly outpaced 2017’s winner Moonlight ($28 million) and actually ranks as the top-grossing best picture winner in five years. And Dunkirk, the only other film to nab more than two wins on Sunday, took $188 million at the domestic box office — just a little more than Get Out, which was nominated in multiple categories and saw a writing win for scribe-director Jordan Peele. 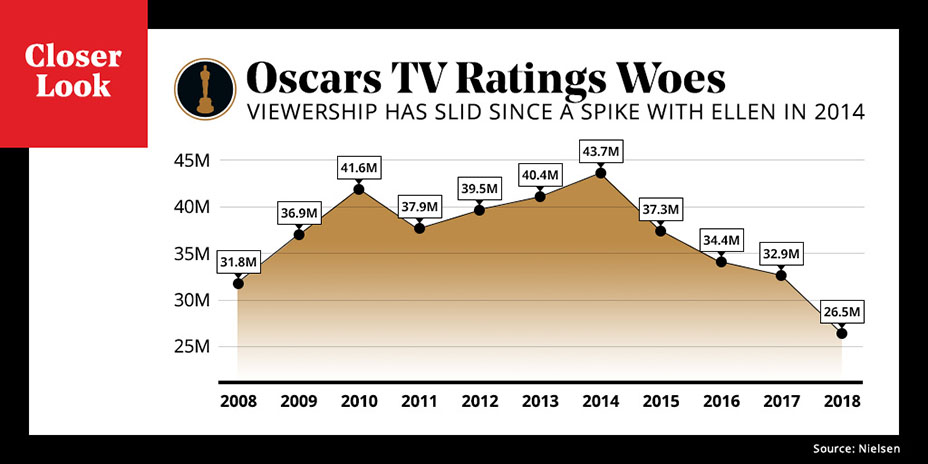