TV executives delving into their companies’ IP libraries in search of series to reboot, take note: Viewers are more interested in revivals of old shows than they are in remakes.

Also, they’re just as interested, if not more so, in original ideas for shows as they are in reboots — but viewers would be very interested in a revival of Friends.

Those are some of the key takeaways from a Hollywood Reporter/Morning Consult poll on viewer interest in TV reboots. The poll arrives at the start of a TV season that features eight reboots or revivals airing on the broadcast networks now, plus a spinoff of a revival, and at least one more reboot due in early 2019.

The poll of 2,201 adults uses the term “reboot” as a catch-all for TV series that are either revived with their original casts returning, a la Murphy Brown or Will & Grace, or remade with the same premise and a new set of actors, like this season’s Magnum P.I. and Charmed. 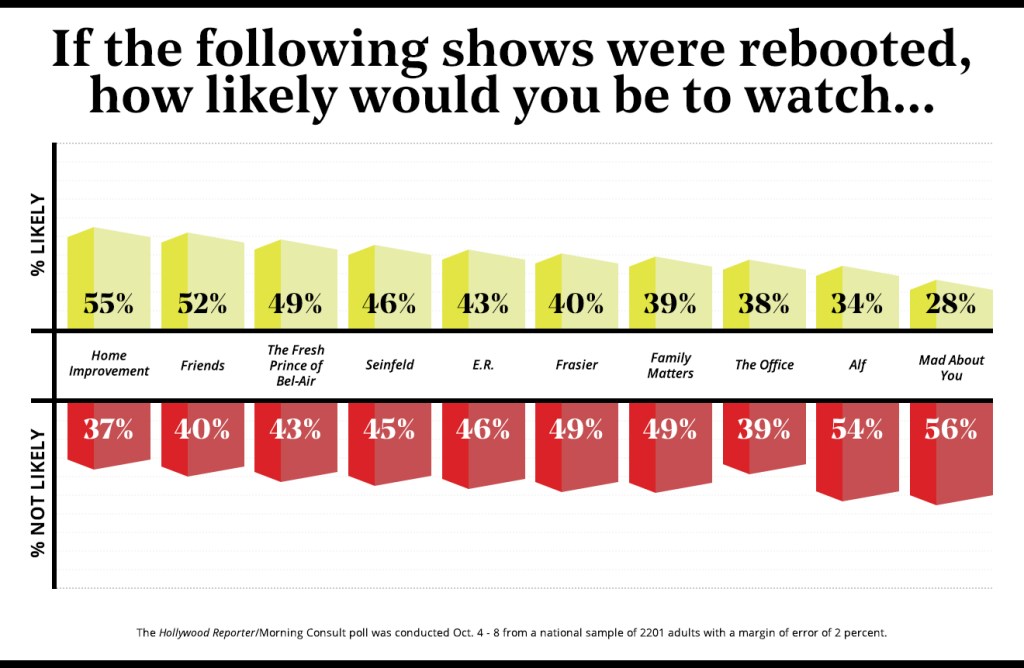 In contrast, only 35 percent said they’d be very or somewhat likely to watch a reboot with a new cast and storyline versus 51 percent who would be unlikely to do so.

“Shows are about characters and the actors who play the characters. Another actor could not play Tony Soprano or Jack Bauer,” says Beckman, aka Twitter’s Masked Scheduler. “CBS did not move forward with Cagney and Lacey [a 2018 pilot that didn’t go to series]. Just slapping a title on a show with different actors in beloved roles is sort of cynical.”

The current glut of reboots may overestimate audience enthusiasm for them, according to the poll. While a third of respondents said they’re more excited about new TV shows than reboots, only 10 percent said the opposite (33 percent are also equally excited about new shows and reboots).

Ratings from the early part of the season support the poll numbers. Two of the fall’s most popular new shows among adults 18-to-49, NBC dramas Manifest and New Amsterdam, are not based on existing shows. The third, Fox’s Last Man Standing revival, was only off the air for a year and has benefited both from heavy promotion during Fox’s NFL games and from the fact that its cancellation at ABC in 2017 became a cause celebre among fans of the show.

Charmed had a promising start for The CW on Oct. 14, drawing ratings a bit above the network average for the week. Magnum P.I. and Murphy Brown, however, are both below CBS’ average ratings for scripted shows. At the time of publication The Conners, a spinoff of last season’s Roseanne revival, had yet to premiere.

“Programming execs follow whatever seems to be working at the moment,” says Beckman. “Given the success so far of Last Man Standing, I think we will continue to see some revivals with original casts, but fewer reboots or reimaginings. Some new thing will take its place. … It’s the occasional hit show that is different but great with compelling characters that will start another frenzy.”

People who have watched reboots generally enjoy them. The poll asked about 19 rebooted shows, ranging from Queer Eye to Gilmore Girls to Battlestar Galactica, and majorities of those who watched them said they had favorable opinions of the reboots.

However, in only one of those 19 cases, that of Hawaii Five-0, did respondents prefer the new version to the original by more than the poll’s 2 percent margin of error (45 percent were in favor of the new version versus 41 percent for the original). The reboots of Battlestar Galactica and Lost in Space were about evenly split between fans of old and new.

Among shows that have not been rebooted (yet), Home Improvement and Friends got the most favorable response, with 55 percent and 52 percent saying they would likely watch a revival. (Friends creators Marta Kauffman and David Crane have said that will “never happen.”) Near-majorities said they would also watch reboots of Family Matters and Seinfeld.

The Hollywood Reporter/Morning Consult poll was conducted from Oct. 4-8 from a national sample of 2,201 adults with a margin of error of 2 percent.

When Stars Like Taylor Swift Get Political, Do Voters Listen? (Exclusive Poll)

Oct. 16, 9:05 am Updated with a new graphic correcting likely/unlikely numbers for Home Improvement, The Office and Family Matters.