Like a phoenix with a short attention span, the broadcast television lineup has again self-immolated — only to re-emerge from its smoldering remains in front of Madison Avenue media buyers for the annual upfront bazaar. Beginning May 15, execs from the Big Four take Manhattan to tout new projects, returning series and refined schedules, ignoring the past year’s missteps amid near-universal linear ratings declines and an upfront sales market that buyers say is shaping up to be less bullish than the estimated $9 billion-plus spend from 2016. Behind the scenes, the newest orders reflect an escalating push for vertical integration. On stages, the message is uniform: TV is still the safest buy (advertisers won’t find their spots next to anti-Semitic videos, unlike on YouTube). Forget gains, these upfronts are all about avoiding any steep commitment declines. Notes Horizon Media’s David Campanelli, “No one but [CBS Corp. chairman and CEO] Leslie Moonves is saying that this is an incredibly strong market.”

With roaster Jimmy Kimmel sitting out this year’s May 16 Lincoln Center meet-up, the star of ABC will be the newly revived American Idol — in whatever form ABC Entertainment president Channing Dungey and boss Ben Sherwood are ready to show it off. (A full Idol talent announcement, initially hoped for, is now said to be unlikely — as NBC reality czar Paul Telegdy cleverly snatched up Idol alums Kelly Clarkson and Jennifer Hudson for The Voice.) Fox’s former flagship is expected to get a big cross-brand push from ABC parent Disney, one that is going to steal scripted thunder (and real estate) come midseason. Meanwhile, the search intensifies for a Modern Family replacement. ABC’s top player was commissioned for two more (likely final) seasons, and an untitled Zach Braff comedy is so far the most appealing addition. Drama has bigger holes, with Shonda Rhimes‘ Scandal officially set to end next season and Grey’s Anatomy now mocking the Grim Reaper. “They have to launch a drama not produced by Shonda,” bemoans one insider. Of course, there will be more Rhimes (see legal drama For the People, a replacement for axed sophomore The Catch) and another Marvel swing (The Inhumans). ABC, more than most, will tout multiplatform audiences. But relatively modest ratings declines (down 11 percent) aren’t of concern to plenty of buyers who favor ABC’s penetration in top markets and its recognizable aesthetic. Says Campanelli, “You know an ABC show when you see one.”

Entertainment president Glenn Geller is on medical leave (industry rumors now swirl about whether he’ll return at all), so he won’t be the one downplaying the network’s senior-skewing status come May 17. Or, for that matter, dancing around a 12 percent audience falloff. Moonves is the ringmaster in his place, capping off a pilot season that one agent says has seen the hands-on CEO “more involved since before [former network topper] Nina Tassler.” Orders of nearly identical S.W.A.T. and SEAL Team reflect, as one source describes, a desire for “more serious drama” than light mainstays NCIS and its spinoffs. But at least one buyer polled says he’s skipping the Carnegie Hall presentation. “Yeah, they’re the most watched and pretty stable, but these are not desirable shows from a buzz standpoint,” he explains. “That kind of tempers their standing.” Speaking of buzz: Anyone who does pass will miss an appearance by a resurgent Stephen Colbert, golden boy once more.

While the Super Bowl and World Series have proved a nice distraction for the No. 2 network, Fox originals are down 24 percent with adults 18-to-49 — and insiders are feeling the pressure from execs at the highest level, who, sources say, haven’t hidden their frustrations about the network’s performance. There has been a handful of recent staff departures, and heading into screenings there were rumblings about the possibility of more changes underneath Fox TV Group chairmen and CEOs Dana Walden and Gary Newman. In the meantime, the longtime partners will hit the Beacon Theatre on May 15 to remind buyers of how well that X-Files reboot (now returning for another 10 episodes) did in 2016 and to tout potential for a Grease repeat with live stagings of A Christmas Story and Rent. The new crop, featuring an anticipated X-Men drama from Marvel and an X-Files-esque comedy starring Adam Scott and Craig Robinson, faces extra scrutiny after several seemingly safe bets (24 reboot Legacy) from last upfronts fell flat. “Empire worked for them, but their [other] dramas have been in big trouble,” says another rep. Which explains the surprise return of cable kingpin Ryan Murphy, whose 911 drama with Angela Bassett has no shortage of heat.

Ownership above all else is the de facto trend, but nowhere is that on display more this upfront than at NBC. When doling out new series orders, Jason Katims‘ Rise and the Will & Grace revival among them, the first pilots to get the kiss-off were all from independent studios. NBC didn’t pick up a single new show that was not made by sister Universal Television, while putting a further profit squeeze on some returning series from outside. Sources say Warner Bros. TV paid $20 million and ceded partial Blindspot ownership to ensure its renewal. (Sony TV at one point offered $15 million, per sources, to save briefly canceled and higher-rated Timeless — but the network finally agreed, sans pay-out, for a shortened season two for spring or summer 2018.) “It’s become a business increasingly motivated more by finance than potential audience, and that’s more acutely true if you are an outside producer,” says one studio insider. Not that ad buyers will notice. Some, however, lament NBC’s lack of cohesive programming — what is “an NBC show,” anyway? — though that clearly is not the case with The Voice and one very hot freshman series. “We’ll be talking a lot about This Is Us,” says NBCUniversal ad sales chairman Linda Yaccarino, who takes the stage alongside NBC chairman Bob Greenblatt on May 15 at Radio City Music Hall. “Appointment television had become a phrase of the past, but that’s really changed for us with this show.” Another narrative: The NBC formula is working — at least from Nielsen’s perspective. It’s the only broadcast network with a strong ratings story, down a mere 5 percent in the key demo compared with the previous season. That will make it the only one with a legitimate claim during all the false choruses of “We’re No. 1!”

Traditional TV tune-in down 25 percent among adults 18-49, Mark Pedowitz will close out the broadcast presentations May 18 with, one would expect, some sexy streaming stats. Nonlinear views, after all, are the reason modest performers like Riverdale occupy the scant available real estate on the youth-centric net. But a pressing concern for advertisers will be that sizzle for Black Lightning. Pedowitz had promised a CW moratorium on new superhero shows, but the forthcoming Mara Brock and Salim Akil-produced adaptation makes DC Comics series No. 6 at the network. That’s enough to fill 60 percent of one week’s schedule — which, by the way, is also getting a Dynasty reboot. Millennials won’t know what hit them. 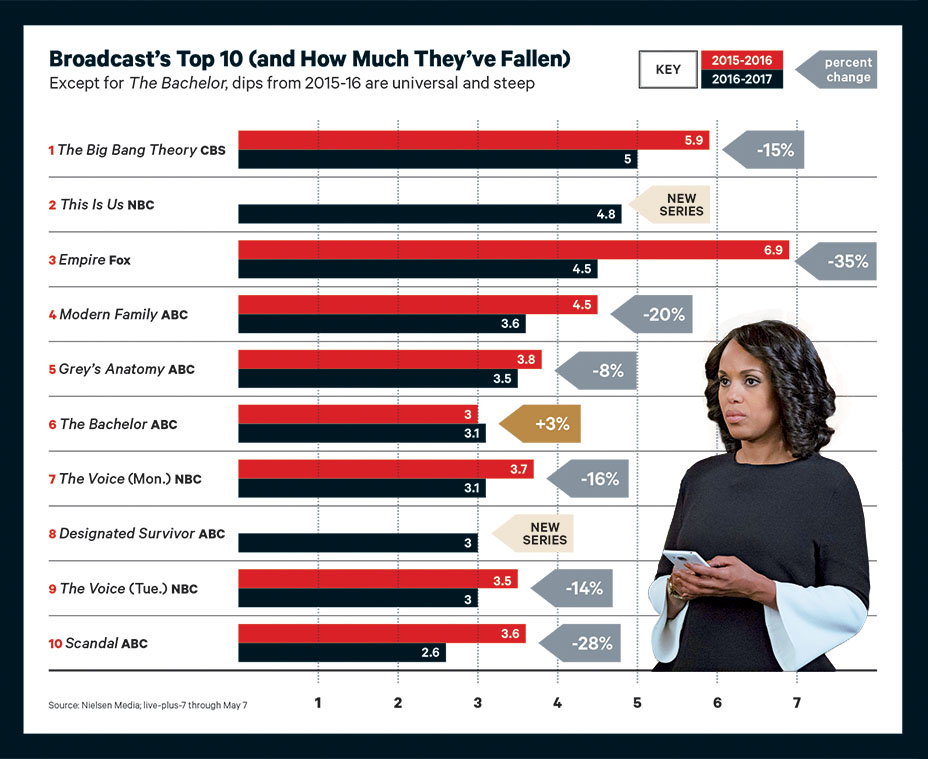