As Madison Avenue buyers head into a $9 billion battle over 30-second spots on the 2018-19 schedule, Hollywood’s studios are just now coming up for air. After another dizzying broadcast pilot season, they landed another 37 series on the air, a mix heavy on multicams and procedurals. But before any of those new series go back into production, The Hollywood Reporter caught up with nine studio chiefs for an honest if still raw assessment of the 2018 upfronts – the good, the bad and the truly shocking.

TV Upfronts: How the Studios Fared as Ownership Remains the Top Priority

The buzzword of upfront week was …

My most rewarding pickup was …

Patrick Moran, ABC Studios Tim Doyle’s The Kids Are Alright. It’s so personal and delivers such a specific point of view.

Stapf Charmed. Not only did we get it ordered but we got it right.

Roth Lethal Weapon and Gotham at Fox, Splitting Up Together at ABC and Blindspot at NBC. We got four of the five bubble shows picked up.

Fox Cancellations Explained: Why So Many Shows Got the Ax

And the most disappointing or surprising pass was …

Moran Kayla Alpert’s pilot, ABC’s False Profits. Bellamy Young and Vanessa Williams are terrific. The network has ordered additional scripts, so are going to keep working on this one.

Igbokwe The Brooklyn Nine-Nine pass at Fox. I wait and hope for that [renewal] call, and it’d always come in previous years and I thought it would come again.

Roth Lucifer was a very painful pass. It’s a show that deserves to continue.

Davis The Mick was hard.

Frost Guess Who Died was a big surprise given the auspices of Norman Lear and its amazing cast [Holland Taylor, Hector Elizondo and Christopher Lloyd]. Bob Greenblatt told us that there was no room on the schedule.

The new show I wish was ours is …

Davis ABC’s A Million Little Things. It’s clearly trying to live in the emotional, character-driven space of our This Is Us, which is very tricky to pull off.

Moran I still wish This Is Us was ours. Dan Fogelman is a rare talent.

Igbokwe ABC’s The Rookie. Nathan Fillion is accessible and one of those actors whom people love. That’s a show that could go on for a long time.

Stapf CBS’ God Friended Me. It feels like a fresher version of Joan of Arcadia. I would love to be creatively involved in that. [CBS co-produces the series with Warner Bros., which is the lead studio.]

Parnell CBS’ God Friended Me. It’s proof that you can do a hopeful, affirming show on broadcast.

The 5 Most Surprising Pilot Passes This Season

The most surprising or frustrating trend …

Moran Reboots continue to flourish. In this crowded environment, it certainly helps to have some built-in awareness in a preexisting title. I suspect we’ll see studios look to mine their catalogues again next season.

Stapf Co-productions are the way everybody is doing business these days.

Jason Clodfelter, Sony TV It seems to be deal-making ahead of creative every step of the way, and that part is frustrating.

The most challenging part of this season’s negotiations was …

Kurtzman Every year, networks look to renegotiate license fees downward as a condition of a series pickup. At no time was this trend more prevalent than this past pilot season. No doubt network economics are challenged, but studio costs continue to rise and production deficits continue to increase, so the burden of reduced license fees is borne entirely by the producing studio. At best, network license fees cover a smaller and smaller percentage of the production costs. Reducing license fees further is beyond frustrating, it’s painful and unfair.

Fall TV 2018: Watch Trailers for All the New Broadcast Shows

Kurtzman Last Man Standing revived at Fox. And Jimmy Kimmel being so irreverent. It’s almost to the point where I only go to New York to see [his skewering at the ABC upfront].

Igbokwe The Friday before upfronts when Brooklyn Nine-Nine moved to NBC. It was 12 hours of negotiating. By the time it actually happened, I was almost in stunned disbelief. To be able to call them all to say, “Hey guys, you’re uncanceled,” there’s nothing like it. I felt like Ed McMahon saying you just won the Publishers Clearinghouse Sweepstakes.

Parnell Brooklyn Nine-Nine and Last Man Standing. If there isn’t a better example of vertical integration, that’s it.

The hardest call I made or received was …

Igbokwe No Way Back didn’t find a place on the NBC schedule. That was a tough one.

Davis Calling the Chernins about The Mick.

Parnell Calling Norman Lear. He’s an icon and we wanted so much to deliver for him and get that show on the air.

The show we intend to shop elsewhere is …

Igbokwe No Way Back. It has amazing stars in Derek Luke and Raul Esparza and it’s highly bingeable. We’re talking to some outlets.

Stapf Both our CW shows that didn’t get ordered, Skinny Dip and Playing Dead. And with Lionsgate TV, we’re exploring another home for L.A. Confidential.

Kurtzman We’re putting together game plans to see where else Last Man on Earth and Mixtape can go.

Davis If we can get a home for The Mick, nothing would be more gratifying.

Roth I can’t limit that to one; I’ve got five in my head right now.

The 'Roseanne' Effect: Networks Doubling Down on Multicamera Comedies

If I had this development season to do all over again, I would …

Igbokwe Given the interest in multicams at multiple networks, we would have developed more.

Davis Make more procedurals, and that’s what we’re going to be doing.

And finally, the biggest threat to the traditional studio business is …

Moran Volume. With so many shows in production, we are all fighting for stage space, production facilities, et cetera. It’s a very crowded environment at the moment.

Igbokwe Rising costs. If someone wants to offer a writer-producer $300 million, I can’t fight that.

Roth Vertical integration and disruptors in the business.

Clodfelter We have a business that’s putting all dealmaking ahead of creative, and I think that will catch up to everybody. 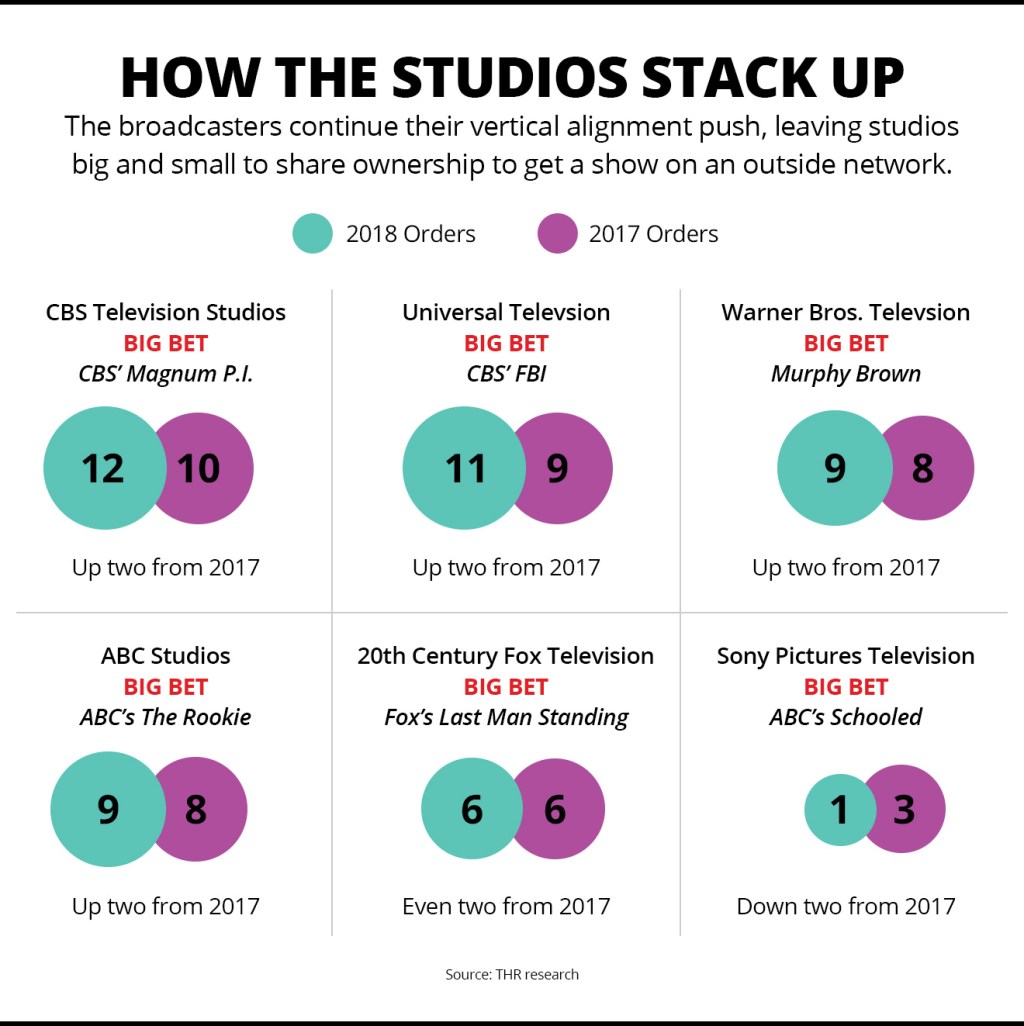 Keep track of all the renewals, cancellations and new show orders with THR’s scorecards for ABC, CBS, Fox, NBC and The CW and with all the latest pilot pickups and passes with our handy guide. For complete coverage, bookmark THR.com/upfronts.

A version of this story appears in the May 23 issue of The Hollywood Reporter magazine. To receive the magazine, click here to subscribe.