There is no shortage of ways to measure whether we have reached Peak TV, but allow us to offer one more: the proliferation of episodes that smash right through once-sacrosanct runtime barriers, 42 minutes for dramas and 22 for comedies. Once a rare perk on pay cable — way back in 2002, HBO let David Chase get away with a 75-minute installment of The Sopranos — supersized episodes now are common at such ad-supported outfits as FX, USA and AMC. And streamers like Netflix and Amazon often give creators carte blanche to go as long as they want, putting pressure on the rest of the industry to match the freedom.

“All the rules are upended in the gold rush that is contemporary TV, and, more than ever, it’s important to honor the unique visions of showrunners,” says Jeff Wachtel, chief content officer and president of Universal Cable Productions, which produces USA’s Mr. Robot, whose longest episode has been 65 minutes. “The rigid formulas of the past simply no longer apply.”

One episode of AMC’s Better Call Saul clocked in at 53 minutes (not including ads, of course), just under the 55-minute runtime of progenitor Breaking Bad‘s finale. And FX regularly has been blowing past the hour mark: Legion‘s longest episode was 70 minutes, and The Americans and Fargo both have reached 69 minutes. Not to be undone by basic cable, HBO’s Game of Thrones will air an 81-minute-long finale this coming season, its longest episode ever. Meanwhile, sci-fi drama Westworld‘s episodes averaged 61 minutes, and its 89-minute season finale joined the ranks of the lengthiest TV episodes ever, which includes the pilots for Netflix’s The Get Down at 93 minutes and HBO’s Vinyl at 112 minutes.

“It’s very rare when our shows hit the exact format time prescribed,” says Eric Schrier, president of original programming at FX, which was the first ad-supported network to experiment with extended runtimes on Nip/Tuck, The Shield and Sons of Anarchy, whose season-six finale stretched to two hours with ads. (While extended runtimes once sparked fights over ad revenue, it’s a moot point now that networks have figured out ways to preserve ad load by inserting more commercial breaks.)

The practice is best suited for slower-paced shows like The Americans, which lives in deliberate moments and lingering looks. The drama’s most recent season debut devoted more than 12 minutes to a virtually dialogue-less grave-digging sequence. “As you can imagine, there was a lot of discussion about the length,” says executive producer Joel Fields. “We wound up on the phone with [FX chief] John Landgraf, and he said, ‘My take on it is that the purpose of it is to show how grueling and difficult it is to dig up a human grave in the middle of the night, so I wouldn’t touch it.’ ”

But the new norm of TV episodes approaching the length of feature films may be too much of a good thing, especially when viewers are overwhelmed by the sheer amount of content available and critics have begun to express frustration with the lagging storylines and flabby writing. “We need to be careful not to create a bar-to-entry for the audience. I know that when I see that an episode is much longer than the standard time, I will sometime put off watching,” says Wachtel. “It’s not something we want to do too often.”

And while writers on broadcast network shows still have to stay within normal bounds, not all yearn for unfettered freedom. “There’s not a bunch of people working in network TV who have to come up with six act breaks and have a 42-minute time frame who are going, ‘This is so great,’ ” says Dan Fogelman, creator of NBC’s This Is Us. Still, he adds, “On the other side, those who work with unlimited screentime maybe on occasion have a hard time editing stuff down because you never want to lose your babies.”

At the Television Critics Association press tour in January, Mike Schur, creator of The Good Place (also on NBC), lauded the creative benefits of strict rules, saying that shows “benefit from the network structure because it forces you as a writer to think about act breaks, it forces you to think about what the main character is going through … I watch certain shows on certain streaming services where I’ve thought, ‘Man, give me like two hours with an editor, and I will dock 15 minutes off of this sucker, and it will be better.’ “

Damon Lindelof, showrunner of HBO’s Leftovers, generally agrees: “Constraints are always good. They’re like deadlines, they’re absolutely and totally necessary.” But then again, the finale of his show ran for 72 minutes, including by his estimate 20 minutes where star Carrie Coon is onscreen saying nothing. “At a certain point, you are shaving outlines of dialogue that seem critical or you are cutting off someone’s face before an emotional moment can land.”

Of course, traditional TV time constraints were never about what was best for the story, but rather what was best for business (scheduling, consistent ad breaks, etc.). And it’s the changing nature of the TV business that has allowed episodes to run long. Netflix allows for a six-day shoot instead of the typical five days allotted for half-hour comedies, which is one of the major reasons Unbreakable Kimmy Schmidt‘s episodes have ranged from 23 minutes to 36 minutes. “That translates to 20 percent more show,” explains co-creator Robert Carlock, who doesn’t miss having to cut down 30 Rock episodes to broadcast standards.

The same is true for Master of None. The Netflix comedy’s second season has an episode that lasts only 21 minutes and another that runs nearly an hour. “We want viewers to be like, ‘I’m excited to watch the next one because I don’t know what I’m going to get,'” said series co-creator Alan Yang, who helped write an episode that concluded with a three-minute-long no-dialogue scene of Ansari riding home in an Uber. “We want that unpredictability.” Yang says that Master of None‘s 57-minute installment was treated like two episodes and that Netflix granted them several additional shoot days. “I remember talking to the [crew members] about it and they were all happy that they got to work an extra week,” he adds. 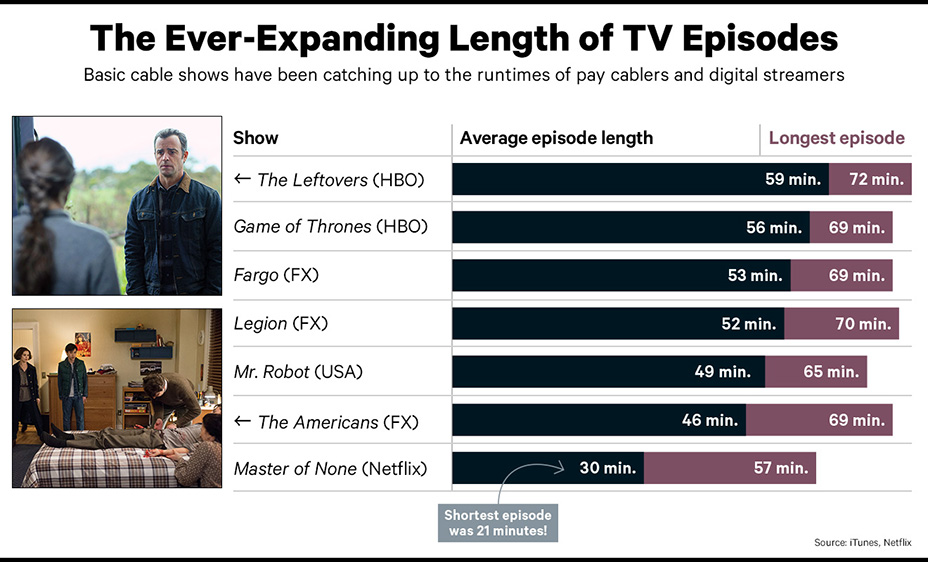