It is happening again — and that’s just about all David Lynch is willing to say on the subject of the Twin Peaks revival.

The legendary filmmaker, who along with co-creator Mark Frost serves as the key creative mind behind Peaks, one of the strangest and most surreal series in television history, returns to the Pacific Northwest for another proverbial slice of cherry pie in Showtime’s upcoming revival. Much like it was in the damn good coffee glory days, the new iteration of the series comes shrouded in secrecy. Trailers and teasers have revealed almost nothing about the plot, except for the fact that some of those familiar gumshoes you liked are back in style, including Kyle MacLachlan as Agent Dale Cooper, the late Miguel Ferrer as the blunt but brilliant Agent Albert Rosenfield, and Lynch himself as the hard-of-hearing Gordon Cole.

Beyond that? Fans are in the dark, trapped in a Black Lodge of sorts as they wait to find out what exactly happened to Agent Cooper after the brutal cliffhanger that closed out season two. For frustrated fans looking for someone to blame for all the secrecy, look no further than Lynch.

“It comes from my own personal desire to not know anything before I see a film,” Lynch tells The Hollywood Reporter about why he’s keeping the story under such tight wraps, an ethos so serious that several of the cast and crew won’t be permitted to speak about Peaks on the record until after the season ends in September. “I want to experience it in a pure way and be taken into a world, letting it go where it takes you. It takes you where it wants to take you, and it’s a beautiful, beautiful experience. It’s very precious, and the more you know, it sort of takes away from that full experience.”

Lynch is so committed to keeping the show’s secrets that he won’t say whether the upcoming season paves the way for another. (“I’m not allowed to speak about this,” he says.) He won’t weigh in on any of the new characters, either. (“I don’t know if I can really get into that,” he offers coyly, punctuating the mystery with a quick laugh.) He’s tight-lipped on the casting process, too, with the series involving more than 200 actors, including franchise newcomers (albeit Lynch veterans) Laura Dern and Naomi Watts.

“You try to get the right person for the part, and that’s it,” he says. “Pure and simple. So much of filmmaking is common sense.”

It’s common sense that Peaks is returning now, given the events of the initial series. In season one’s unforgettable third episode, Agent Cooper experiences a vision of an older version of himself sitting inside the infamous Red Room, where he sees the backwards-speaking Man From Another Place (Michael J. Anderson) and a woman who is a dead-ringer for the dead Laura Palmer. “I’ll see you again in 25 years,” she later tells Cooper — and at least on that one plot point, Lynch confirms that Laura’s promise has been upheld.

“It’s 25 years after” the original run, Lynch says about when the series takes place. “It was spoken about in the original series, and it just so happened to be about that time [in real time], so Mark and I got together and started talking. One thing led to another, and here we are.” Lynch adds that he and Frost didn’t write that line originally with the intention of returning to this story all these years later: “It wasn’t really something you can plan, but then again, there it was.” 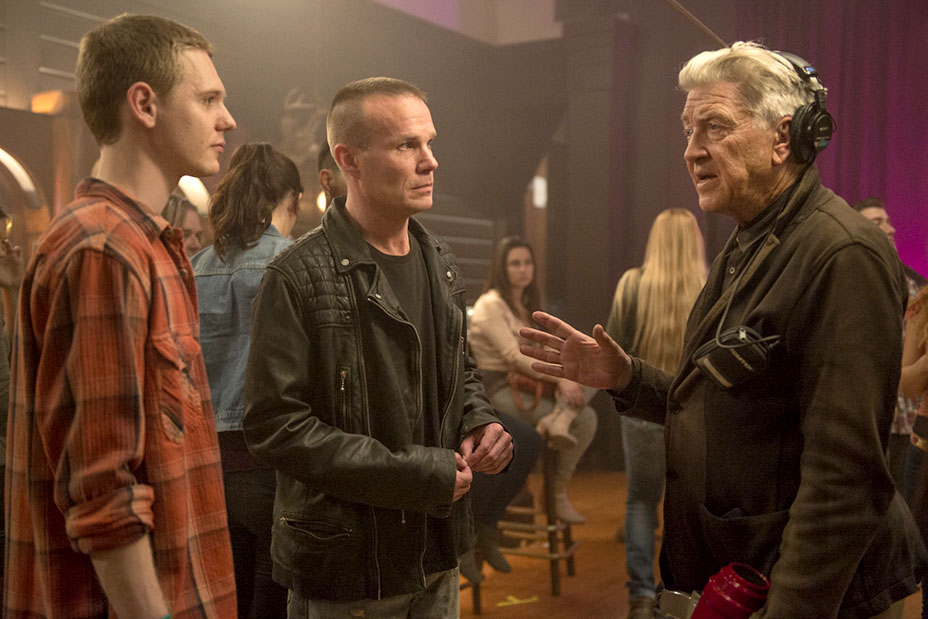 How will the 25 years of story and real time between seasons impact what viewers are about to see when they return to the Great Northern and the Bang Bang Bar? Again, here comes Lynch with another riddle: “I’ll say that many things are the same, and many things are different, just like in real life.” Take Agent Cooper as an example of that dichotomy. It’s clear that Kyle MacLachlan is once again locked and loaded to lead the charge on Twin Peaks, but it’s not clear that he’ll be reprising the eternally optimistic Cooper, at least not in the traditional form. The final episode of the series ended with Cooper’s soul trapped inside the Black Lodge, with the murderous spirit Killer BOB (played by the late Frank Silva) now occupying Cooper’s mortal form in the real world.

“It was kind of like, the engine’s revved up again,” MacLachlan tells THR about that nightmarish ending. “There’s a great question of, ‘What’s going to happen now?’ Unfortunately, it was too late — which is why it’s so beautiful that we’re able to return after all of this time and pick the story up and move forward and hopefully have some answers.”

Alas, those answers will have to wait, as MacLachlan happily abides by Lynch’s policy.

“I think it’s terrific,” says MacLachlan. “I’m excited about the idea. I’m actually thrilled about the idea, that we’ve been able to keep it under wraps, which was the idea from the very, very beginning. When I had my first reading of the script, I read it at the studio in a room by myself. Of course, I didn’t tell them I took photographs of every page….”

(He’s kidding, of course, in case Mr. Lynch is reading.)

“They let me read it all the way through, and then I had to pass the script back,” he continues. “The pages were then distributed out, and I was one of the ones who had most of the script, which I needed. Most people just received what was pertinent to them. Again, it was an effort to keep things contained, and also to help us. That way, if anyone asks us about the story, we could say, ‘I don’t really know!’ As opposed to feeling an obligation to say something, or maybe you would feel compelled out of your own sense of whatever to say it’s about this or this. There were no opportunities for that. I love that people are going to be embarking on this fresh. For something that’s so well known, it’s going to be a whole new journey. I think that’s wonderful.”

When it comes to speaking about Peaks from a structural standpoint, Lynch and MacLachlan are much more open than they are about the story. The series is set to air across 18 episodes, all of which were directed by Lynch, who prefers to view them as 18 hours of one sprawling movie.

“It was definitely a different structure,” MacLachlan agrees. “Instead of traditional episodes that were handed out one by one, this came as a very long feature. He’s made a point of calling them ‘hours’ or ‘parts.’ In his mind, he’s directed an 18-hour movie that was fractured into 18 installments. It’s different in the telling of the story; maybe not different in the playing, because the scripts were already broken into scenes, anyway. You’re concentrating on smaller pieces. But when you go to assemble it? I’m sure the editors were looking at it and going, ‘What are we going to do!’ The assemblage, I’m sure, was very different.” 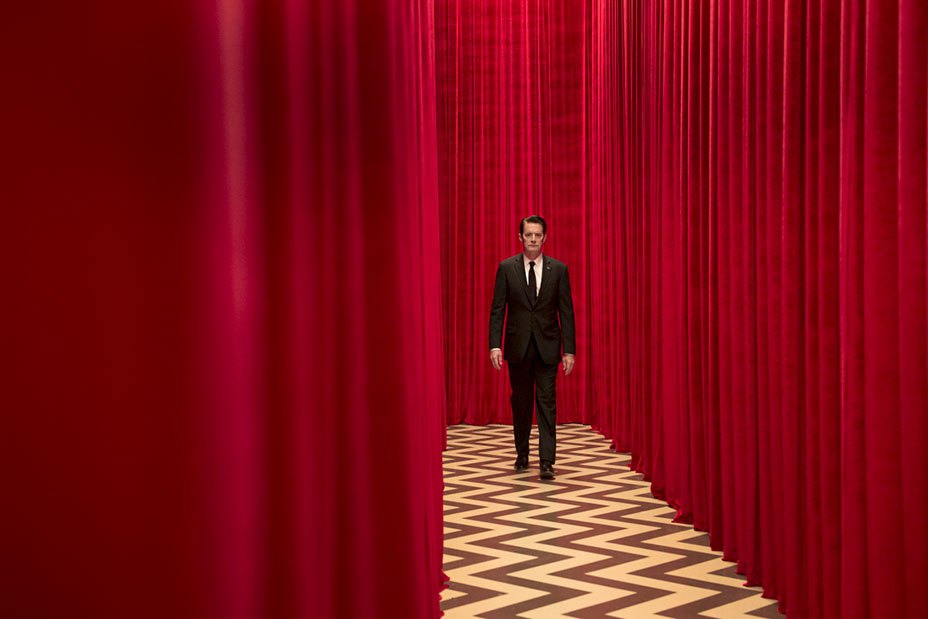 The structure may be very different, but several other ingredients are very familiar, starting with the man who plays Cooper and the man who created the character. Twin Peaks‘ long-awaited return serves as the long-awaited reunion of Lynch and MacLachlan, who first worked together on the 1984 adaptation of Frank Herbert’s Dune. After more than 30 years of knowing each other and collaborating on films like Blue Velvet, few individuals are better positioned to weigh in on Lynch’s mysterious ways than MacLachlan.

“He’s unlike anything else,” says the actor. “The environment he creates for us is so supportive. There’s a lot of humor involved. There’s tremendous focus. There’s a clarity of vision. If for some reason he’s not sure about something, he sits and thinks about it until he’s sure. There’s no forward steps without knowing where we’re going. But that’s not to say he’s not open to happy accidents, as well. That’s one of the catchphrases about David’s process: If there’s something that happens that’s unexpected or accidental, as opposed to rejecting it outright, oftentimes he welcomes it in. He counts it as life. Those things can be very revealing and important. There’s room for that in the creative process. It’s a real pleasure working with him, whether you’re talking to an old-timer like me or people who have just come on for the first time. To a person, they’ll say that it was one of the best working experiences they have ever had.”

To MacLachlan and the hundreds of actors appearing this year in Twin Peaks, rest assured: the feeling is mutual.

“I love these characters, and I love the actors and actresses,” says Lynch. “This was like getting together for a family reunion.”

The family reunion extends to Twin Peaks fans far and wide on May 21, when the new season premieres on Showtime. Keep checking in all week for more on Twin Peaks, including our episode and character rankings, a longer conversation with MacLachlan, and more.