[Warning: This story contains spoilers through the final episode of Twin Peaks: The Return.]

“What year is this?”

Welcome to the four most gutting words in Twin Peaks lore, uttered by Federal Agent Dale Cooper (Kyle MacLachlan) in the final moments of David Lynch and Mark Frost’s 18-part Showtime revival. Just as the original series ended on a powerful cliffhanger — one in which a dark Dale Cooper doppelganger cackled the words “How’s Annie?” into a mirror, paving the way for this menacing monster to lurk throughout Twin Peaks: The Return — this new version of the cult-classic supernatural thriller concluded on a similarly confounding note, with Cooper and a woman who looks exactly like Laura Palmer (Sheryl Lee) standing outside of the Palmer residence on a dimly lit street in sleepy Twin Peaks, the world apparently completely unaware of their existence.

It’s a haunting ending, and a polarizing one, to put it lightly. Even those who loved Lynch and Frost’s vision for the final notes of Twin Peaks were left in the clutches of despair, without any easy answers and with the very likely possibility that we’ll never see Cooper and Laura on our screens. For his part, series star MacLachlan is similarly unsure about the future of Twin Peaks, and is similarly left “reeling” after watching the finale. Read on for his thoughts on what Lynch unleashed in the finale.

What does it feel like, having the complete Twin Peaks out there in the world now?

It’s incredibly satisfying to have it out there. It’s something that’s going to be floating around in our consciousness for a while now. It’s also difficult. I don’t like saying goodbye to characters that I really love and care about — not just the ones that I play, but also the cast, and to see them come into my home every week was really nice. It was really a pleasure to me. I’m going to miss that. And I just love what David Lynch creates. It’s unlike anything that’s out there. He’s an artist. He compels you to think and feel things that are not that comfortable all the time, and questioning, questioning, questioning … I’m going to miss that, you know?

Given the way you’re talking about the ending, does this feel like a definitive conclusion to you? Do you feel like we’ve just seen the end of Twin Peaks?

If this is the end, does the question of “What year is this?” feel more satisfying to you than “How’s Annie?” as a final landing spot for Cooper? In other words, are you OK with this as the ending for Twin Peaks versus how things were left at the end of season two?

(Laughs.) You know, it’s a good question … I would love playing Cooper forever and ever. It’s just one of those characters who seems to fit. David and I have worked to make this amazing world and character. I love it. I hate saying goodbye. I hate not seeing him every week on the television. In terms of “What year is this?” I think it just asks more questions. He’s left us with the direction to go back through and watch and absorb and take in what we’ve just seen again. But apart from that? I am still processing it myself. I’m still processing what I saw. I know I filmed it. I filmed it a long time ago, actually. But I had no idea how it was going to fall into the context of everything. I’m still reeling. Reeling, I think, is the word about what it all means.

Well, good art asks questions, you know? It doesn’t always provide answers. I think that’s what we’re experiencing right now. (Laughs.) It’s not always the most comfortable or the most satisfying feeling. It’s also asking us to consider what we’ve just seen. That’s how I’m looking at it.

When you filmed that final scene on the street outside of Laura Palmer’s house, did you know you were shooting the ending of Twin Peaks?

It’s very sad imagining Dale Cooper as anything less than a victorious white knight shining bright through a dark world, but is that how he should ultimately be viewed — as a tragic character, given the ending?

Again, I don’t know. It’s certainly a hero’s journey. I have the same questions that everyone has. Is this it? Was he successful at all? It just asks so many questions, which will resonate with people for a long, long time, as opposed to having … not a happy ending, but an ending of some kind. There are certainly some triumphs, like with Killer BOB. But beyond that, what are we left with? I’m still asking myself those same questions. 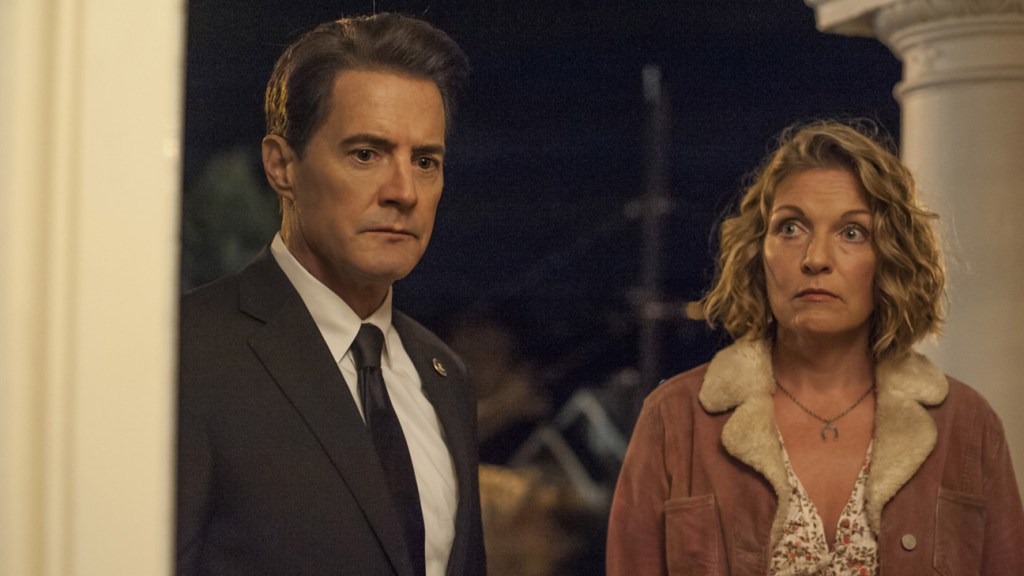 You must be happy that, at the very least, Dougie Jones gets a happy ending.

Yes! (Laughs.) That was a nice moment, wasn’t it? We’ll put that one on the plus side.

In terms of other moments on the plus side, it was so spectacularly satisfying to watch you say, “I am the FBI.” Was it as satisfying to play that scene as it was for us to watch it?

Yes, it really was. Cooper had been tucked away for such a long time. To be able to wake up … and to be honest, I was hoping that I was hitting the right tone with it. It had been a long time. Bless David, he was there to help in case anything felt like it needed more of this or less of that, or whatever. But the writing is so perfect for Cooper. His movements through space are so dynamic, and so efficient, and so precise, and those things all came back from the original character. He cuts right through things in a very kind way. He gets the job done. All of those kinds of things came back to me kind of quickly. In watching it, I went, “OK, that worked.” I was pleased with that, I will say.

'Twin Peaks' Finale: How 'The Return' Ended For Every Main Character

What does it feel like knowing all roads led back to both Cooper and Laura Palmer, or at least to Sheryl Lee?

That was profound. I remember coming to work early on, and the makeup trailer is where you see everybody, because that’s the first place you report to in the morning. I came in and walked in and sometimes it would be Madchen Amick or Harry Goaz, and that morning, Sheryl was there. It was just so great to see her. It carries with it so much weight and experience about where we’ve been and what this story is about. We are these people that are bringing to life David’s vision and his world and his creation in front of the camera. I think we recognized the responsibility with that, and also we felt like we were chosen somehow, in a very special way. You’re humbled by that and by his trust in you and his belief in you, that you are the vessels. We both felt that, I think. We both had this connection to each other because of that. She’s a special person. Very special.

I don’t think anybody expects to see David Lynch come out and reveal his intention behind the ending of Twin Peaks. But have you had any conversations with him? Has he illuminated the ending for you?

I don’t ask him, and I wouldn’t ask him, actually, knowing him as I do now. Because the whole journey was for the audience to experience and to take away from the experience their own interpretation. He’s just presenting his creation, and we all have our own take on it. I think as I’ve gotten older I’m less inclined to want those answers, and I’m more inclined to just let the experience sit with me and dig down in me and awaken or resonate or touch those things in me that he wants to as an artist. He’s special. (Laughs.) So I wouldn’t ask him.

Final question for you. What’s going to happen to the Mitchum brothers with the FBI if Cooper isn’t around to attest to their hearts of gold?

That’s a very good question. (Laughs.) I have full faith that those guys are going to be “A-OK,” as Cooper would say. How could they not be with the ministration of the three ladies they have with them? They will be fine.

What did you think of the Twin Peaks finale? Let us know your theories in the comments below.