Continue to The Hollywood Reporter SKIP AD
You will be redirected back to your article in seconds
Skip to main content
June 5, 2017 12:23pm
Logo text
[Warning: This story contains spoilers from the fifth episode of Showtime’s Twin Peaks: The Return.]
As Twin Peaks: The Return continues following the story of Dale Cooper’s (Kyle MacLachlan) escape from the Red Room and subsequent catatonic state in the real world, the fifth episode of the revival also introduced a new character that will play a key role in the rest of the season. Becky Burnett (Amanda Seyfried) is the daughter of Shelly Johnson (Madchen Amick), and she’s a young woman in trouble.
After being mentioned by her mother in episode two, the first time viewers see Becky is when she delivers bread to the diner and borrows money from Shelly. The hushed conversation is seen from across the room by Norma (Peggy Lipton). While the details remain unheard, Becky tells her mother it’s due to her husband Steven (Caleb Landry Jones) being unable to secure work. This comes after viewers see Steven losing potential employment due to his inability to create a proper résumé and fill out forms.
In this scene and the one that directly follows it, three very different Beckys are shown. The first, the public face that walks into the diner, is all smiles as she greets people and hands off her bread. Then, when asking her mother for money and when she first sees Steve after leaving the diner, she’s scared and angry. This isn’t the lot Becky wanted for herself in life, but she feels trapped.

It’s the third side of the character that is the most interesting, though. After snorting cocaine with Steven, she almost immediately softens, delighting in the drug. In her place is this euphoria-driven version of the character, without a care in the world.
Seeing these three vastly different faces of the character makes her seem very similar to another Twin Peaks face: Laura Palmer (Sheryl Lee). Before she was killed at the beginning of Twin Peaks, Laura was a very different person publicly than she was personally.
To the world, Laura Palmer was the all-American girl. She was a good student, the homecoming queen and volunteered at Meals on Wheels. Beneath the surface, though, everything wasn’t so happy and bright. Most importantly, it was revealed that she was the victim of sexual abuse as a child, at the hands of her possessed father. 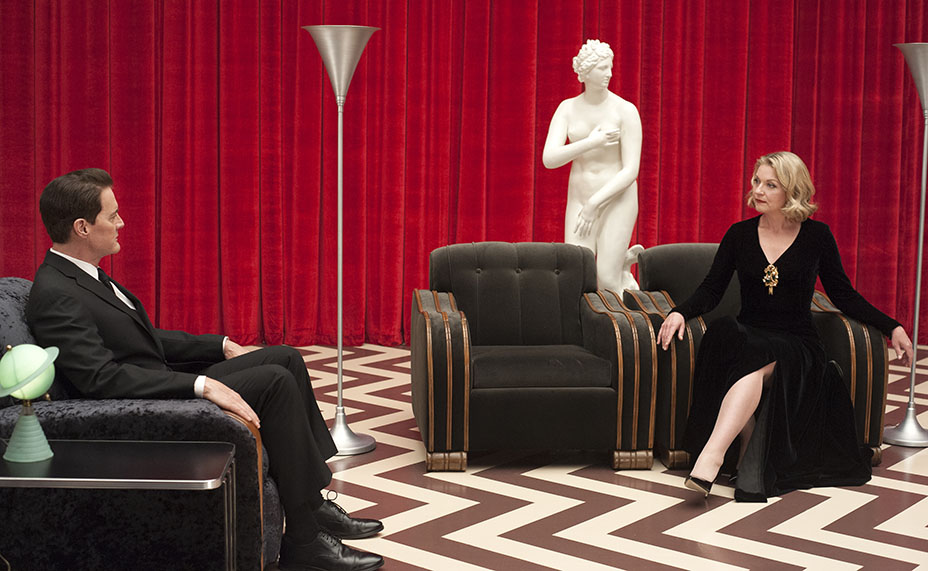 That was the beginning of a dark road for Laura, which included cheating on her boyfriend Bobby Briggs (Dana Ashbrook) with James Hurley (James Marshall), among others in town, as well as briefly working as a prostitute at One-Eyed Jack’s. It was eventually revealed that this was all fueled by a cocaine addiction Laura was saddled with, similar to what Becky is going through now.
It became clear as Cooper investigated Laura’s death that she was a master of the facade, only letting the world see the version of herself she was comfortable projecting, the safe and clean teenage girl that was the apple of her parents’ eye. While the revival is still early in Becky’s story, it’s hard to miss the similarities. And that’s a frightening prospect for the new character.

As co-creators David Lynch and Mark Frost continue building the world of their revival, a lot of focus is being put on the return of Cooper after over two decades in the Black Lodge. Eventually though, all roads lead back to Twin Peaks. With 13 episodes left in this season, the show has yet to place major importance on the titular fictional town in Washington.
With the arrival of Becky, though, perhaps that’s about to change. Does this all mean Becky is doomed? It’s too early to know for sure exactly what role she will play in the rest of The Return. What’s more, it’s not just Laura she shares similarities with. Becky also has quite a bit in common with her own mother.
Like Becky, Shelly was in what could be considered a toxic relationship. For Shelly’s part, she was involved with two men that were bad for her, either of which could possibly be Becky’s father: Bobby and Leo (Eric DaRe). While Leo was abusive, Bobby was immature and addicted to drugs. Likewise, Shelly was essentially addicted to him the way Becky seems addicted to Steven.

'Twin Peaks': Could Audrey Horne Be the Anonymous Billionaire?

Luckily, Shelly came out on the other side a mature and strong woman who weathered the storm. Now, as an adult, she sees herself in the mistakes her daughter is making. Yet she can’t stop herself from helping. It puts Becky in a dangerously dependent situation that will only be more difficult to break down the line. As Norma tells Shelly after Becky leaves, “If you don’t help her now, it’s going to get a lot harder to help her later.”
Then again, what if Shelly never ends up getting the chance to help her daughter? If Becky is indeed on the same trajectory as Laura Palmer, there isn’t a happy ending to her story — only one of heartache and grief.
Twin Peaks: The Return airs Sundays at 9 p.m. ET/PT on Showtime. Stay tuned to THR.com/TwinPeaks for continuing coverage of the series.