“Water is a right, not a privilege. It shouldn’t be that just because you are a person of means, with access to water, then you don’t have to die from waterborne illnesses or watch your child suffer from things as treatable as diarrhea.”

This message comes from actress Uzo Aduba, who recently joined the cast of FX’s Fargo and boasts three Emmy Awards for her role as Suzanne “Crazy Eyes” on Netflix’s Orange Is the New Black. But her most recent project was a trip to her native Nigeria to participate in an episode of National Geographic’s six-part documentary series Activate: The Global Citizen Movement, which seeks to drive action toward ending poverty, inequality, education and sustainability.

“Uzo used her platforms to call for Nigerian federal and state governments to take action, both on social media and in person, says Talia Fried, senior manager of global policy and government affairs at Global Citizen. “Her tireless advocacy has been a great asset in securing commitments and continuing to create meaningful change.”

As Aduba explains to The Hollywood Reporter, “Nigeria is the largest economy in Africa, yet 80 percent of the nation lives without drinkable water.” Armed with that figure, her primary goal on the trip was to get five governors to commit 15 billion Naira [the Nigerian currency] from their budget to help solve the clean water and sanitation problem. “This isn’t a small faction of the Nigerian citizenship, which would still not be OK. We’re talking about, overwhelmingly — people are living this way,” emphasizes Aduba.

Aduba grew up in Boston and traveled to Nigeria for the first time at 8 years old, where she was exposed to the reality of the devastating situation — her parents having to plan their water consumption down to every precise detail and calculate how much bottled water they would need each day, witnessing locals collecting rain water in an empty oil drum to use for cleaning, bathing and drinking if bottled water ran out. “It had never occurred to me, living in the United States — where the unique privilege exists and the assumption that when you flip on your faucet, water comes out — that that was not true for everyone,” she says.

Alongside Global Citizen, Aduba used this latest trip to forge connections with members of her native Igbo tribe and visit villages without access to clean drinking water. The actress says she was “heartbroken to see that the stream where water was bring pulled from was the same stream where the cows drink from and defecate beside, the same stream where mosquitoes rally, where run-off from outdoor Porta Potty [toilets] find their way home. It’s the same stream where litter and pollution are all around it. The image of seeing that there are waterborne illnesses in that stream, and that children play in it and young women pull water from it for cooking, bathing and serving — it was a lot.” 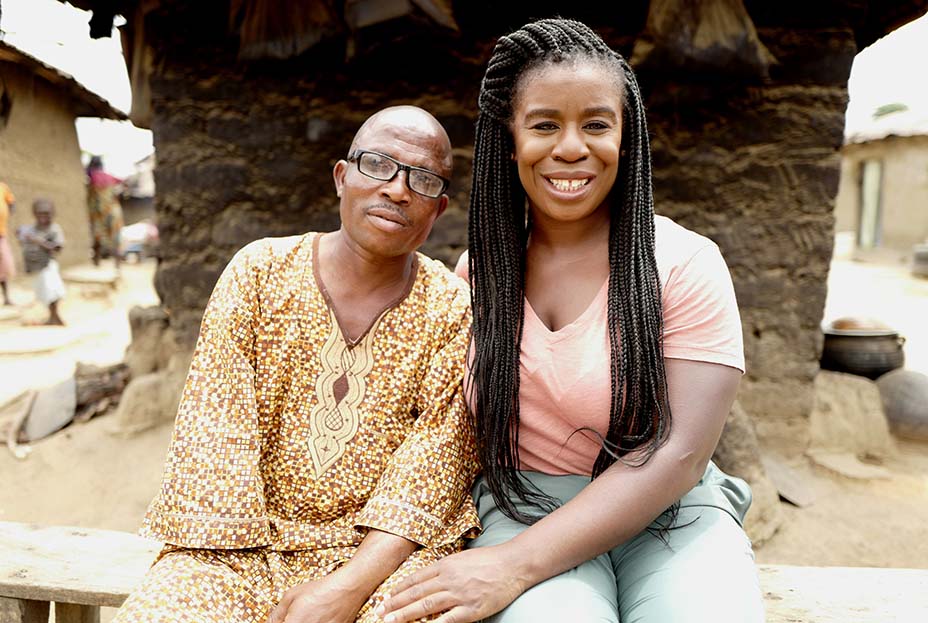 “Uzo’s experience in Nigeria shows firsthand what polluted water does to vulnerable communities, and most importantly, how we can mobilize to create change, says Courteney Monroe, president of National Geographic Global Television Networks. P&G’s Allison Tummon Kamphuis, who leads the Children’s Safe Drinking Water and Gender Equality program, and is featured in the episode, adds that Aduba inspired everyone with her impassioned words on what citizens and governments around the world can do to help.

Concludes Aduba, “My main goal was to remind Nigeria of her power, and what she has accomplished in such a short time — from gaining her independence to the number of professional successes — and what we do when we commit ourselves to excellence.”