When The Vampire Diaries premiered in 2009, it was the most-watched debut of any show on the fledgling CW network to that point. And until superheroes took over the mantle, it was the most-watched series on the network. While the pilot got mixed reviews from critics, it was the sixth episode of its first season, “Lost Girls,” penned by co-creators Kevin Williamson and Julie Plec, that those connected with the franchise signal as the show’s major turning point.

The Vampire Diaries was just setting up the love triangle between human teenager Elena Gilbert (Nina Dobrev) and vampire brothers Stefan and Damon Salvatore (Paul Wesley and Ian Somerhalder) when one of Elena’s classmates, Vicki Donovan (Kayla Ewell), was turned into a vampire — and killed off just one episode later.

'The Vampire Diaries': Everything to Know About the Series Finale

“I have so many emotions and horrors and trauma attached to that episode,” Plec tells The Hollywood Reporter. “But I feel like the last couple minutes of the preceding episode, ‘You’re Undead to Me,’ when Elena is putting all the pieces together and shows up at Stefan’s door and says, ‘What are you?’ until probably the end of…episode 106, ‘Haunted,’ when Damon is on the porch and volunteers to compel [her little brother] Jeremy’s painful memories away. Whatever contained within that section is what I would call series-defining in terms of when we hit our tone, when we hit our characters, when we hit our emotions, when we hit our plot. And everything was firing in all cylinders.”

Wesley and Somerhalder also pinpointed “Lost Girls” as a touchstone for their eight-season drama. “I think that’s when we were like, ‘This shit is pretty good,'” Wesley said.

Somerhalder even went so far as to declare it his “favorite episode ever.”

“Mine too,” Wesley agreed. “Ian and I watched this episode together, and that’s when we were both like,… ‘This is really good.’ That was a great moment.” 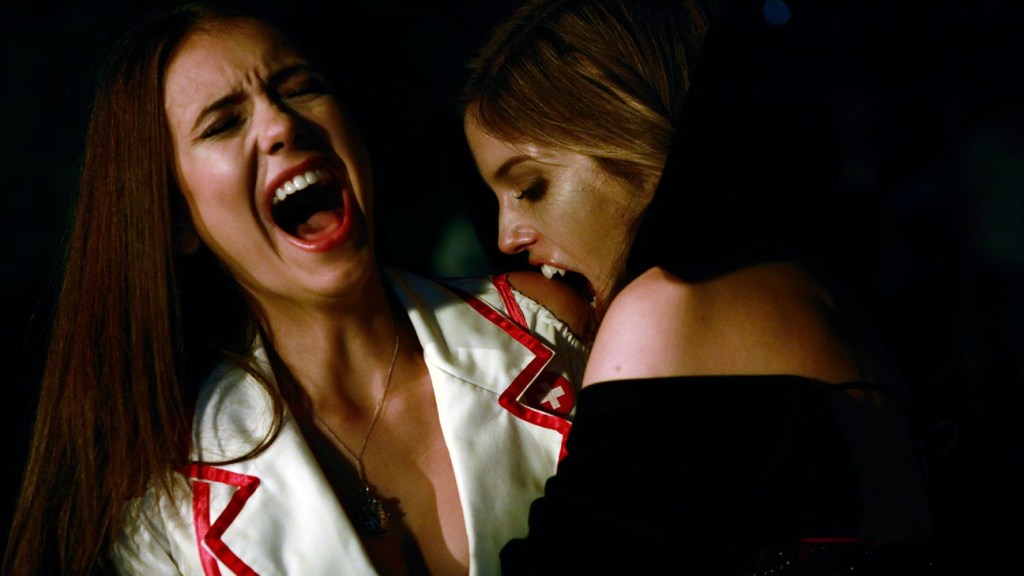 Remembered Somerhalder, “It’s a really phenomenally crafted episode of television. It might be a teen vampire soap opera, but dammit, it’s a great piece of television, and I remember looking at Paul and just thinking [it clicked].”

Crafting that episode, Plec recalled, was not an easy process. “It was hellacious getting there,” she tells THR. “The thing I love most about ‘Lost Girls’ is that I would say 60 percent of that episode was written between the hours of 11 p.m. and 6 a.m. the morning before it absolutely do or die needed to be delivered to production in order for them to be able to shoot it properly.”

The finished product, though, worked. “I take great pride in that episode because it was written in such chaos but also delivered such gangbuster elements,” Plec said. “I give a lot of that credit, of course, to Marcos Siega, who directed it and knocked it out of the park, and then Ian and Kayla for their amazing work that they did together in what we call the coke den Depeche Mode scene. And just the execution of the flashbacks, it was so exceptional. Everything just worked, thank god, because it was not fun getting there.”

Killing Vicki off an episode later — it would be more than two years before Game of Thrones killed Ned Stark in its first season — also shocked the audience. “[Vicki] dying was the thing that a lot of critics and fans point to as the game-changing moment of the series when it became clear that we were not messing around and that no one was safe, and it gave the series some pretty heavy stakes that people really responded to at that time,” Plec said. “Maybe television at that time was being a little safe and boring, I don’t know why, except to me it seemed fairly obvious it was the thing to do. People were really shocked by that choice and it really got a lot of people talking about the show.”

The Vampire Diaries series finale airs Friday, March 10, at 9 p.m. on The CW, following a one-hour retrospective that looks back on the previous eight seasons.