[This story contains spoilers from the third episode of Veep‘s final season, “Pledge.”]

During three episodes of soul-searching, Veep‘s Amy Brookheimer seesawed back and forth about a major life decision. In a rare move for the woman who is arguably the hardest-working staffer in Selina Meyer’s (Julia Louis-Dreyfus) orbit, a pregnant Amy has been putting herself first — for once — in the final season of Veep while weighing her options.

“Amy doesn’t consult her own self and her own intuition — that’s the last thing that she consults — when making a decision,” Anna Chlumsky tells The Hollywood Reporter about the way her obsessive and overworked political aide functions. “She’s a strategist at heart, so she looks at life as a game that can be won or lost. The thing that has served her up until now has been her ability to read external sources; what the world wants, what the polls want and what the optics are. She’s used to reading everybody else. This journey for her has been one of a woman learning to listen to herself.”

After a one-night stand with Dan Egan (Reid Scott), Amy tried to imagine what her future would look like if she kept the baby. She gave Dan many chances to show a glimmer of hope that he could change. “It’s all about reading the odds sheets — she’s always reading the Vegas board of her life,” Chlumsky adds. Ultimately, in the third episode of the seventh season of HBO’s political comedy, which aired on Sunday, Amy finally bet on her own intuition and decided to get an abortion.

Her decision came in a split-second moment, during a scene that Chlumsky says showed a “beautiful acceptance” between Amy and Dan, who have a long history. “To Amy, the odds work out if this guy that she’s actually in love with could change. And when she makes the phone call [to schedule the abortion], I think she realized Dan’s not changing. That he’s a sex addict, not the guy she needs him to be and definitely not the guy that a child would need him to be,” she says. Despite Amy knowing that, on some level, all along, Chlumsky says she needed it to click: “It’s a motherly moment for her to realize that, and there’s this beautiful acceptance of finally seeing Dan for who he is. And there’s almost an instantaneous acceptance that there are other alternatives for life that might be better.”

On Veep, Amy is so often stressed that Chlumsky relies on acupuncture to correct her character’s arms-crossed stance. Even when Amy is on the doctor’s table in “Pledge,” she fights a drug-induced relaxation. When it came to plotting Amy’s final arc on the long-running comedy, even more of that pressure carried over. Chlumsky says she collaborated with showrunner David Mandel and the writers in order to dig deep for the final episodes, which included working with writer Rachel Axler on the abortion episode.

Mandel has called himself a fan of the Dan-Amy saga since taking over from series creator Armando Ianucci after season four. Though the showrunner stopped short of rooting for them as blindly as viewers might, he did say the final season would shine a light on the pair. The pregnancy story gave Mandel and his writers a chance to not only “really get into this Dan-Amy relationship and what the hell that is, but to also go one step further and really get into who Amy is,” he recently told THR.

“Something that we really, really wanted to do was to address this part of so many women’s lives in a way that was really specific to Amy’s journey, because the only way, in my opinion, to respect everyone’s experience is to honor the fact that it’s individual,” says Chlumsky of Amy’s abortion. “It’s not cut and dry. People don’t have it all figured out. And the only way you can really convey that is to stick to the story and to the character. Make sure that we’re not trying to speak for everyone. Think of it as a doorway into that subject matter, which is just to explore one woman’s experience.”

Amy’s abortion happened at an Iowa women’s clinic, with Dan — the “proud father to not be,” as he tells the doctor — as her escort. After cursing out a group of pro-life protesters, Amy tells the doctor she is “as sure as she will be” when signing the consent form. “It’s deep and it’s difficult, and stuff like that stays with you your whole life. I don’t think it’s the end of the questioning, but it’s certainly the end of the decision-making,” says Chlumsky about how Amy will cope with her choice. “This story is far too identifiable to not keep telling it. So many women have so many diverse experiences with this topic and why on earth would we shy away from examining that in a real way. We felt like we had to, for her.”

While Amy did not arrive at the decision lightly, Dan made his position clear from the start. After offering to “go Dutch” and split the cost with her on Venmo, Dan showed off his familiarity in the area by coming armed with feminine healing products and calling out the instrument used during the procedure. “I think Dan recognizing the abortion vacuum and having some history with that model was really just, horrible,” Scott recently told THR about the standout line.

The recent one-nighter is not the first time the coworkers have slept together and, if you ask Scott, he says that Dan has a lot of love for Amy. “I don’t think it’s romantic love,” he adds, however. “I don’t think it ever was or would be. Dan’s perspective is that he knows that she has a thing for him, but he feels that she’s too smart to think they could ever really work. When you spend so much time with people, you start compromising yourself. If these people ever stepped outside their world, they would find much more happiness elsewhere.”

Chlumsky says the reason they have always seemed so well-matched throughout the series is because of the way their “Machiavellian wills and values” align and constantly pull them to one another. The pregnancy news even led to Dan having a brief moment of his own soul-searching. “I think Dan really likes Amy. She drives him fucking crazy, but they work well together,” says Scott. “He knows she’s as shark-y as he is, and whenever she has her little morality crisis, he’s like, ‘No no no. Stay down here with me.’ He probably holds her back a little bit, but that was great to play with this season, especially knowing it was the last one. To ask: Where is it going? And: How close will they get?” 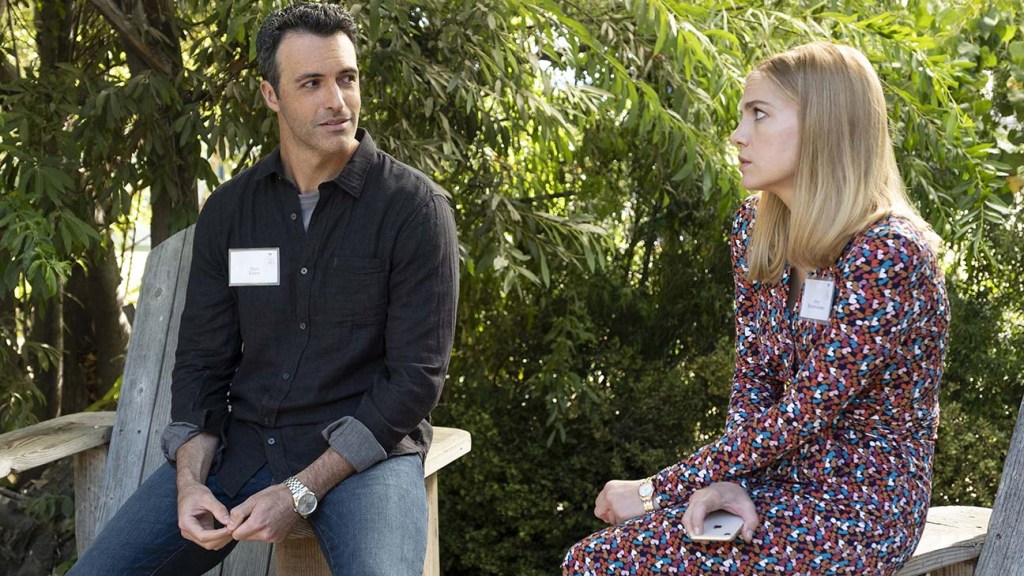 The abortion scene played out as Selina was busy winning a primary debate by telling her female challenger to “Man up!” The parallel scenes showed what Chlumsky refers to as Selina and Amy’s “brand” of feminism. Back in season one when Selina found herself dealing with an unplanned pregnancy, Amy was the insensitive one who only cared about the optics. When Selina found out Amy was pregnant, she reacted the same way.

“It’s a little bit like reap what you sow and also, this is where these women operate,” says Chlumsky of what she calls their “feminism of one” mentality. “It’s still like a sisterhood even though they’re being awful to one another, because it’s like no one else can be that awful to each other but them. Feminism exists for them as the best avenue or way to call all of the injustices that have happened to them and the reason they haven’t won yet. Instead of saying that women need better rights, they are saying, ‘I haven’t gotten what I wanted and it’s because women don’t have as many rights, and I happen to be a woman and that sucks.'”

'Veep' Boss on Tackling #MeToo and the Biggest Threat Ahead

Chlumsky says the final season will continue to examine this “flip side of feminism” as it explores the selfish reasons that motivate Veep‘s politicians. “They ultimately view victory as genderless,” says Chlumsky of Selina and Amy, who will be putting distance between themselves come next week’s episode.

In the final moments of Sunday’s half-hour, Amy makes a major career move now that her schedule has been “scraped” clean, as she says: She accepts a big job to manage Jonah Ryan’s (Timothy Simons) flailing presidential campaign. With Dan’s avid support, Amy jumps at the promotion and doesn’t flinch about leaving Selina behind.

As Chlumsky explains, that decision makes a lot of sense, given past advice Amy has given Dan about getting ahead. “Dan and Amy both understand that’s a terrific job. If you look at season five, when Amy tells Dan that he should be taking on Jonah’s campaign for congressman, she explains what her thesis is on political strategy,” Chlumsky explains. “She basically tells him, ‘If you made Jonah Ryan a congressman, you could run the town, because you would have just turned this enormous turd into something.'”

She continues, “Amy’s role with Selina has sort of been dead-ending anyway. So I think she liked the idea of being campaign manager on a toxic campaign. The stars in her eyes widen big and she gets to go, ‘Wow, if I can be the one’ — it’s purely egoic — ‘to make this campaign actually matter, then anybody will do anything for me.’ And there is the feminism of one: ‘If I’m winning, then all women are winning. I can beat them all. I can run it all.’ That’s where that comes from.”

In order to ultimately give Amy the “best farewell” possible in the final season, Chlumsky warns that things get “ugly” when she jumps over to Jonah’s side and begins to examine what she wants out of life. “As you can see, the Jonah campaign has not been for the faint of heart already, and we have four more episodes left,” she says. Meanwhile, Selina, a “master of not giving a shit,” won’t reveal how she really feels about Amy’s betrayal until the “very end” of the season, says Chlumsky.

“Any woman I’ve ever met who has ever been pregnant, whether they continue their pregnancy or not, that is the moment where you are forced to look at life for all of the unanswerables and for all of the questions,” says Chlumsky of the introspective road that lies ahead. “Amy, I think, has gotten the closest to the essence of her journey via this decision and this experience. Once that’s done and complete, she tries to go back to life as she knew it and fall back on old habits, and I think now she has an inner voice that she never had before and that inner voice, whether we like it or not — because it can be ugly — is her version of figuring it out. It’s not necessarily going to be pretty!”

Ultimately, she says Amy’s race to the Veep finish line provided them with the opportunity to examine the female dynamics of today’s society: “Amy is a perfect way to do that because she has never been exactly identifiable to every single woman. She thinks of the world differently than I think we’re all comfortable with. So, we really did get to explore a lot and also stay really true to her arc. It felt like the dots were connected.”

'Veep': How a Trump Pitch Evolved Into the HBO Comedy's #MeToo Take

Head here for all of THR‘s show coverage on the final season of Veep, which airs Sundays at 10:30 p.m. on HBO.