In 2017, everything is different, even on TV. Don’t get me wrong. Much of the work on TV remains the same. We are still live from New York — or streaming on Monday from our cubicles — with Saturday Night Live. We are still morbidly curious about How to Get Away With Murder on ABC. We are still following the modern family on Modern Family. And we are trying to keep up with an even modern-er family on Transparent. And, of course, we are still trying to unite all the shades — at least most of them — on my CNN docuseries United Shades of America (PLUG!). Much of what we watch on TV now is markedly the same stuff we were watching a year ago. But the frame around it is very different. And the frame around all of this is what matters most to people right now. This year’s Emmy nominations reflect that.

The frame is President Donald Trump and all things related to President Trump. His oversized presence as the — maybe last — leader of the free world changes how we see everything, including TV. I know it’s true, because in season one of my show, we featured an entire episode about the Ku Klux Klan. And while some people pushed back about why I, a black man, would spend any time with the KKK, most people understood that I was trying to honestly show the ugly past (and ugly current) roots of racism in this country. But this year, when I interviewed alt-right leader Richard Spencer in just one segment of an hour-long show, I got so much pushback that journalists regularly ask me about “the controversy.” To the people who felt all the feelings about my Spencer interview, it doesn’t matter that I believe to truly unite America, you have to deal with all Americans. It doesn’t matter to those people that Spencer’s interview is right smack in the middle of an episode that is premised on how awesome immigrants and refugees are for America. It doesn’t matter that my show is on a news network and that Spencer is (was … is?) news. I get it, though. Last year the KKK seemed insignificant because the people who hate the KKK weren’t worried that those ideas were in the White House. And the people who hated the idea of a Spencer interview also don’t want to be reminded that Trump is the president. And some of those people hate that they just read the previous sentence.

The Trump frame has even changed how the best television is made. Black-ish, which was already starting conversations with every episode, suddenly seems absolutely necessary. Its “Lemons” episode, about the presidential election results, was so timely that it must have been written just as Hillary was sending out her “no matter what happens” tweet. Master of None‘s “Thanksgiving” episode (inspired by, co-written by and starring Lena Waithe), about a black woman coming out to her family, feels like a vitamin B12 shot in the Trump junk food era. Her Emmy nomination is the first ever for a black woman for comedy writing. In regular times, this would be simply amazing, but right now it feels corrective, like leg braces to realign which way the culture is going. And if you really want to see how this Trump era affects art, try watching House of Cards or Veep without comparing them to the current inhabitants of the White House. Impossible. 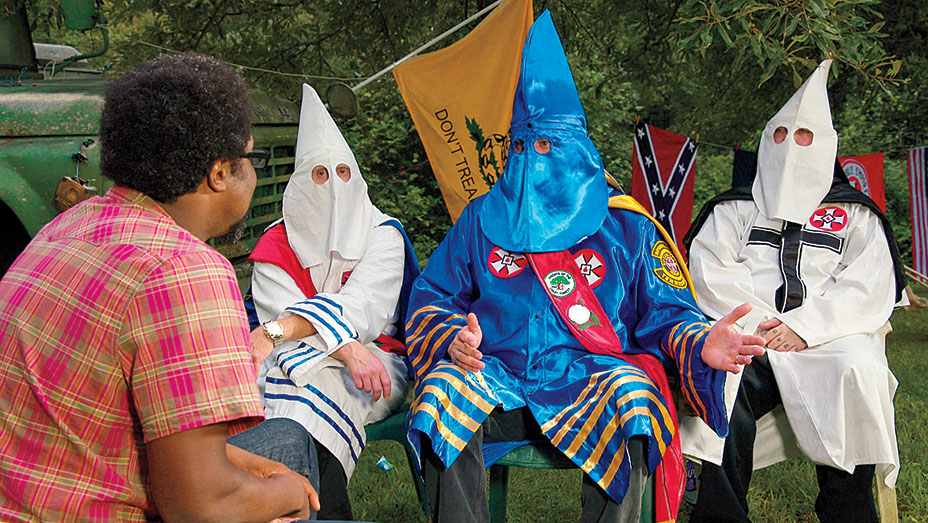 This era is also causing several late-night hosts to raise their game. I don’t doubt that Stephen Colbert, John Oliver and Samantha Bee would have been funny if Hillary Clinton were president, but maybe not as funny as they have been lately. And Jimmy Kimmel, who isn’t known for speaking truth to power (unless that power is Matt Damon), owes some of his Emmy nomination to his impassioned and teary speech about his infant son’s heart condition and health care’s Trump condition.

The way the Trump era frames entertainment is clearly not going to end soon. When the producers of Game of Thrones announced that their new show, Confederate, was going to be about what would happen if the South had won the Civil War and slavery were still legal, there was immediate backlash. (Or is it front-lash, since the show didn’t exist yet?)

When you look at the Emmy nominations, it seems like most of the shows are challenging the Trump era in one way or another. Even a nomination that at first glance seems innocuous, like Dolly Parton’s Christmas movie, suddenly seems political once you read the whole title: Dolly Parton’s Christmas of Many Colors: Circle of Love. Damn, Dolly! I haven’t seen it, but I’m guessing that this movie doesn’t give a damn what bathroom you use, and it certainly doesn’t sound like Dolly plans on being at the groundbreaking of the U.S.-Mexico border wall. And then there’s RuPaul. For as long as RuPaul has been upsetting America’s apple cart, go ahead and give Ru all the Emmys — whether Ru is nominated for them or not — including the one I’m up against Ru for.

Entertainment is at its best when it includes and recognizes more voices. And entertainment is most important when it pushes back against oppression and hatred. And while the Emmys might be just a party for the cool people, I am happy that this year they are recognizing that the coolest people are repping for the people who need it the most, especially in an era that is coming for them.