No, that’s not the setup for a joke. It’s the all-too-real arrival of Negan (Jeffrey Dean Morgan) and the Saviors at Alexandria’s doorstep. As promised, the baseball bat-wielding maniac has made landfall at Rick’s (Andrew Lincoln) community, and he’s come for his share — a nebulous number of items Negan approximates as “half,” but who’s counting? (Actually, “counting” turns out to be a fairly big issue …)

Here’s how the episode played out: 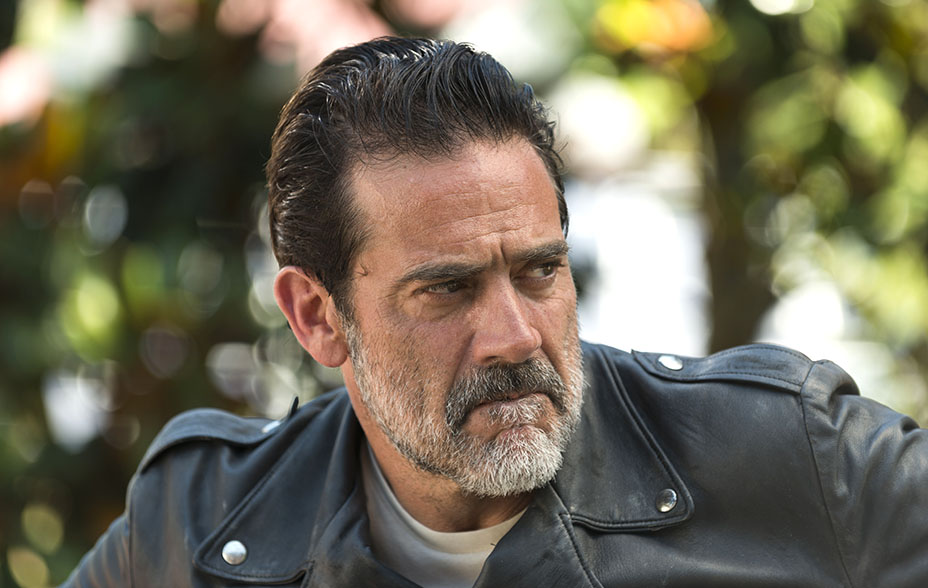 Negan shows up at Alexandria earlier than expected. But why all the glum faces? He’s here to provide “service,” which involves bashing walker brains in and supervising the seizure of Alexandria’s best assets. What’s more, Negan brought an old friend along: Daryl Dixon (Norman Reedus), still wearing his baggy sweatsuit. Negan forbids Rick and Daryl from speaking with one another, but keeps the two men along for the ride all the same.

Early on in the visit, Negan comes into possession of the Alexandria camcorder Deanna used to record interviews with new arrivals. He giddily watches Rick’s interview from back in the day, when he still had a “man bush” on his face. Negan flips the camera on and records new footage of Rick, reinforcing the idea that the Rick of old and the Rick of today are two very different people. As an aside, now that the camera’s back in play, is it too much to hope that there’s still video footage of Glenn (Steven Yeun) that Maggie (Lauren Cohan) and hopefully her baby can watch in the future?

Speaking of Maggie, whatever happened to her after Negan killed her husband? According to Rick and Father Gabriel (Seth Gilliam), she died due to the combination of her sickness and her grief. They take Negan to the Alexandria graveyard and show them her burial site. Luckily, he doesn’t pry any further, as we later learn that Maggie’s still alive. It’s safe to assume she’s at the Hilltop, right?

The situation in Alexandria escalates when Carl (Chandler Riggs) pulls a gun on one of the Saviors, claiming the man’s taking more than “half” of their supplies. Negan intercedes, and while he appreciates Carl’s “man-sized balls,” he can’t have this kind of insubordination on his hands. Carl finally relents, but the drama reminds Negan that Rick’s people are the proud owners of a whole lot of guns — and he wants all of them.

Rick complies with the request, but it turns out that two guns are missing from Olivia’s (Ann Mahoney) list. Negan threatens to kill Olivia if no one comes forward with the guns. Rick desperately pleads with the other Alexandrians to come forward, making it clear that he’s no longer in charge, and has no plan to disobey Negan. Eventually, he finds the guns in a secret stash belonging to Spencer (Austin Nichols), because of course Spencer has the guns.

At the end of the day, Michonne (Danai Gurira) returns home from target practice in the field. (Turns out, she’s a terrible shot, and feels the need to practice given current events.) She comes back with her rifle and a deer carcass in tow, and Rick has to convince her to surrender the gun to Negan. “I can’t lose anyone else,” he begs. Michonne relents, and is further dismayed when Negan takes the deer on top of everything else.

All in all, it’s a productive day in Alexandria for Negan and his crew. Dwight (Austin Amelio) gets to keep Daryl’s bike. Negan gets to keep Daryl, despite a last-minute request from Rick. And Negan also gets to whisper something awful in Rick’s ear. Won’t repeat the words here, but for what it’s worth, the vulgar insult comes directly from the comic books, as viewed below.

After Negan leaves, Spencer decides it’s a great time to openly question Rick’s leadership. Rick does not take kindly to Spencer’s insults, certainly not after everything he’s just been through. After Spencer crosses a line, conjuring the memories of Glenn and Abraham (Michael Cudlitz), Rick makes a promise: “You say anything like that to me again and I’ll break your jaw and knock your teeth out. Understand? Say yes.” Spencer does as told, but the seeds have been sown for a future insurrection.

Later, Michonne confronts Rick again about caving in to the Saviors. In order to explain why he’s bowing to Negan, Rick brings up an old ghost from his past: Shane (Jon Bernthal). Rick talks about how he knows that Shane is baby Judith’s biological father, and he’s forced himself to accept this truth, even though he still views Judith as his own daughter. “She isn’t mine, and I had to accept that,” he explains. “This is how we live now, and I have to accept that too, so I can keep everyone else alive.”

Even if Rick isn’t ready to fight back, there are others in his group ready and willing to take a stand. First on the list: Rosita (Christian Serratos). After finding a gun in the woods on her mission to bring Daryl’s bike to Dwight, Rosita walks over to Eugene’s Alexandrian apartment with an empty bullet casing in hand. “Make me a bullet,” she asks her old friend, bringing us back to Eugene’s season-six plan to manufacture bullets.

'Walking Dead' Star Christian Serratos: Rosita Is on a Warpath