Even though Abraham (Michael Cudlitz) is dead and gone, there’s still room on The Walking Dead for a few Fordisms here and there. For instance: “shit sandwich,” a term that would normally play as one of Abraham’s famous insults, but instead takes on a more literal and brutal meaning in a world without the red-headed military man.

Daryl Dixon learns all about these sandwiches and more over the course of “The Cell,” the third episode of the zombie show’s seventh season. The hour focuses on Daryl’s new life within the Sanctuary, the headquarters for Negan (Jeffrey Dean Morgan) and his people. It’s not much of a life at all, as Daryl dwells in darkness during the day — darkness in his room, and darkness in his soul, as he remains wrapped in the guilt of getting Glenn (Steven Yeun) killed.

But “The Cell” focuses on more than just Daryl. It’s also a showcase for Dwight, Negan’s scarred-up lieutenant — the same man who Daryl found in the woods back in the early going of season six, and the same man who shot Daryl in the woods a few episodes later. As much as Dwight has come across as an irredeemable goon over his past few appearances, “The Cell” humanizes the character, showing that life isn’t so pleasant even for one of Negan’s most reliable soldiers.

Let’s break things down further with a look at seven of the episode’s biggest scenes:

In an alternate universe, Tony Danza was cast as Negan instead of Jeffrey Dean Morgan. But in this universe, Danza still plays a part on The Walking Dead… sort of. The episode begins with Dwight going about his daily routine, which involves watching a little bit of Who’s the Boss, as the theme song plays over the course of the rest of Dwight’s day. Nothing like a good old-fashioned sitcom intro to remind Dwight and the other Saviors who’s in charge.

2. A Tale of Two Sandwiches

Everything that Dwight does, he does for one reason: the perfect sandwich. That’s what it looks like at least, based on the opening sequence of the episode. Dwight forages for pickles, tomatoes, mustard, eggs and more, finally settling down at the end of a hard day’s work with a pretty solid looking snack. But that’s not the only sandwich in play: there’s also what Dwight later describes as the “shit sandwich,” which he feeds to prisoners like Daryl Dixon. It’s nothing more than dog meat scraped between two pieces of bread — probably better than Daryl feels he deserves, frankly.

Speaking of Daryl, he’s seen better days. When we catch up with him, he’s living in a dark and dank prison cell, eating those sandwiches, listening to the same song over and over in a manner meant to drive him mad. But there’s something familiar about Daryl’s existence, too. Notice that spray-painted letter on Daryl’s gray sweatshirt? It’s an “A,” same as the one emblazoned on the Terminus train car that housed Daryl and the others at the end of season four. Not to say there’s a connection between the Saviors and the now defunct Terminus, but for all you thematic detectives, it’s time to get to work. 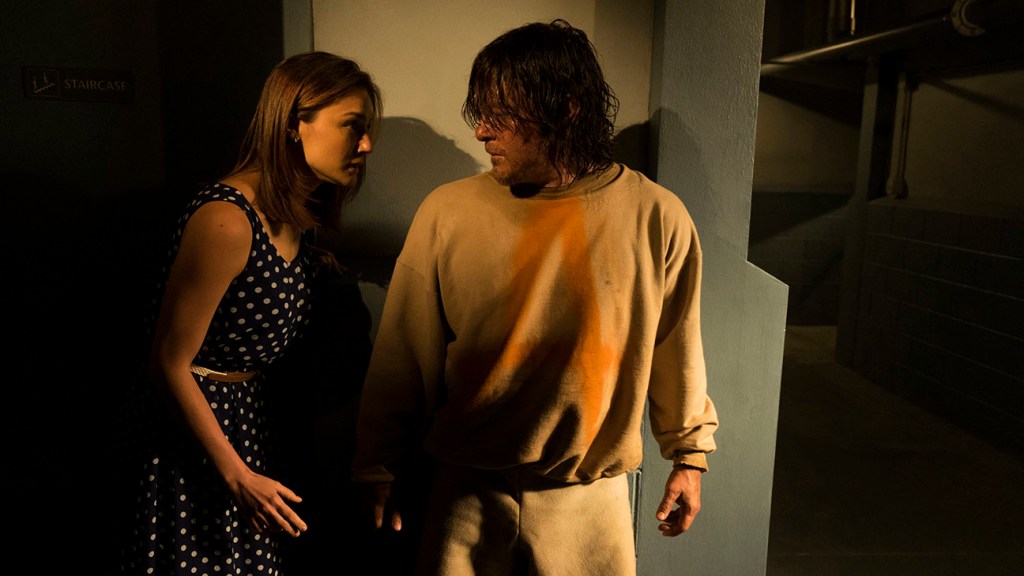 We meet a few of the other members of Negan’s society this week, including Sherry (Christine Evangelista), Dwight’s wife. (Ex-wife, rather, but we’ll get to that in a minute.) But it turns out that most of these people don’t have actual names. When Negan asks a group of his men to identify themselves for Daryl, they all answer with the same name: “Negan.” The bat-wielding psychopath grins his big grin at that: “I’m everywhere,” he tells Daryl. Best to believe him.

How did Dwight get back into Negan’s good graces after running away from the Saviors last season? Negan explains that Dwight came back, hat in hand, begging for mercy. Mercy came in the form of a hot iron pressed against Dwight’s face, marking him forever. It also came in the form of Dwight’s wife Sherry volunteering to marry Negan. He accepts, of course, because he’s a creep — and it gets even creepier: Sherry is just one of Negan’s many wives. The rest of the roster remains unidentified, but expect Negan’s status as a married man to play a pretty big role in the character’s future going forward.

Toward the end of the episode, Negan lays it out for Daryl. He can either join up with the Saviors and get upgraded to an actual room with actual luxuries, or he can continue rotting in his cell. All he has to do is answer a simple question: “Who are you?” The answer, as previously established, should be Negan… but Daryl doesn’t play by those rules. Daryl defiantly remains Daryl, and is subsequently returned to his prison cell, where he has nothing but “shit sandwiches,” a Polaroid of Glenn’s corpse, and darkness as company.

7. The Dwight at the End of the Tunnel

Perhaps the biggest takeaway from the episode is that Dwight isn’t as committed to Negan’s cause as it seems at first glance. At the very least, the toll of sacrificing everything for Negan is apparent on the man, whether it’s through his brief scenes with Sherry, or the fact that he kills an old friend rather than force the man to return to the Sanctuary. Even Daryl sees Dwight’s truth, ending the episode by forgiving Dwight for stealing his crossbow and bike and returning to Negan’s compound. Whether or not Dwight can forgive himself in time to do something good? That remains to be seen.

Follow THR.com/WalkingDead for interviews, news and more about season seven.