[This story contains spoilers for season nine, episode two, of AMC’s The Walking Dead, “The Bridge.”]

Early on in the Walking Dead comic book series from Robert Kirkman and Charlie Adlard, something unthinkable happens to Rick Grimes: he loses a hand.

For years, readers of the comics have waited to see if such an incident would come to pass on the AMC drama. Thus far, no dice, though the latest episode of the series offered up a consolation: the dismemberment of another fan-favorite character, Aaron, played by Ross Marquand.

In “The Bridge,” Rick (Andrew Lincoln) and other members of the communities under his leadership work together to restore a bridge, in order to ease communication and relationships between all of the disparate groups of survivors. Among the workers on the project: Aaron, whose arm is gravely injured when it’s pinned by lumber in an accident. With little time to act and with only Enid (Katelyn Nacon), a medic-in-training, on hand, the decision is made to sever Aaron’s arm below the elbow.

Aaron is certainly not the first Walking Dead series regular to suffer non-fatal dismemberment; indeed, the late Scott Wilson’s Hershel lost a leg early on in season three. But the loss of a hand, combined with Aaron’s new bearded aesthetic for season nine, calls to mind images of Rick’s similar injury from the comic books on which the TV show is based.

“We decided on this story point of Aaron losing his arm before I noticed how much he looks like comic book Rick,” showrunner Angela Kang tells The Hollywood Reporter. “That part of it was just a crazy accident!”

In the comics, Rick loses his hand during his very first meeting with the Governor, played on the AMC series by David Morrissey. Affable enough at first, the Governor’s true colors emerge shortly after Rick arrives in Woodbury, greeting the future Alexandria leader with a machete to the hand. For much of the comic book series, Rick’s arm looks like this: 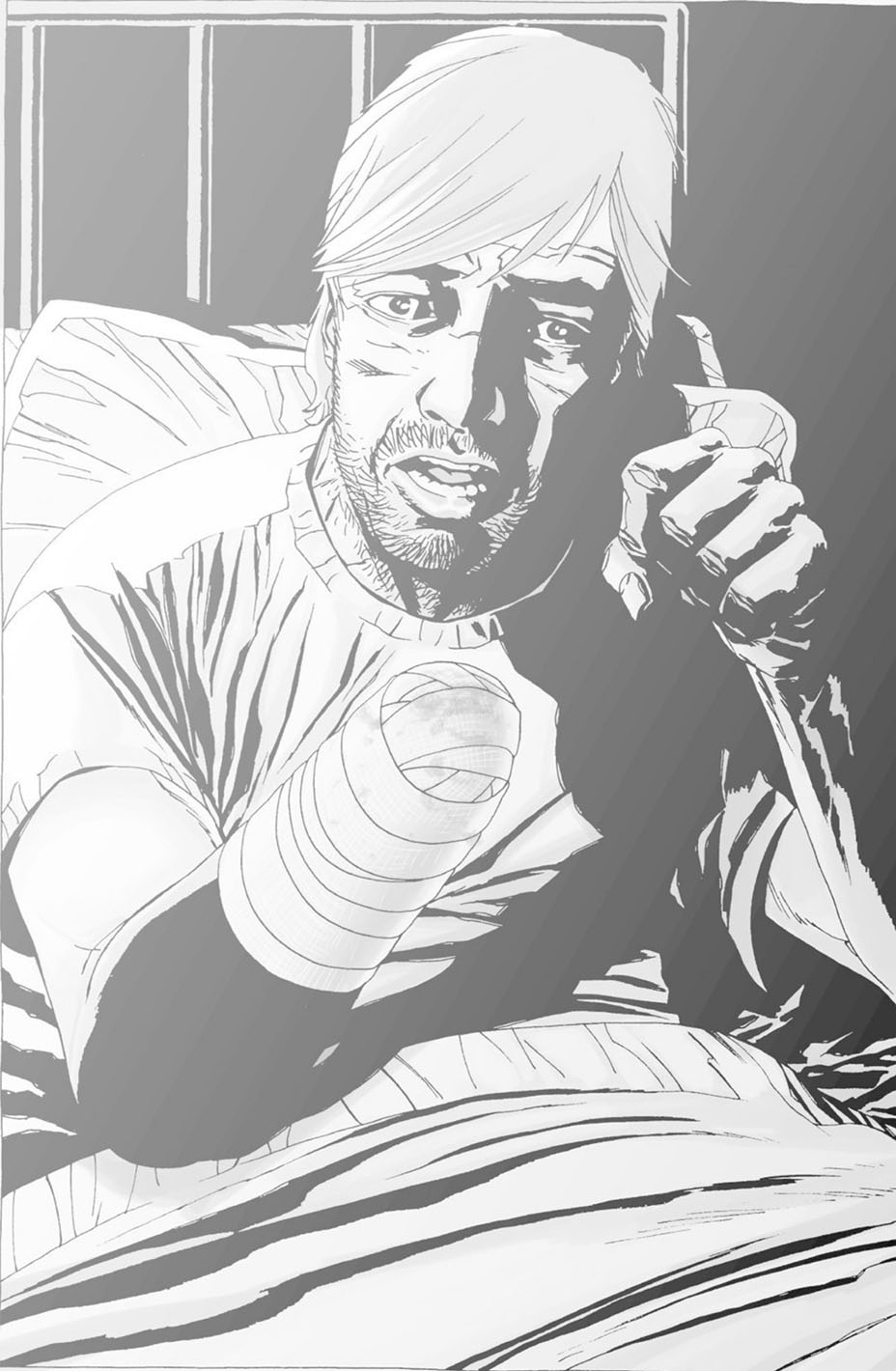 According to Kang, the Walking Dead writers room has long been interested in severing a character’s hand. “We never did it with Rick, for various reasons,” she says, “but we always thought there was so much story opportunity here.”

“We loved the idea of someone who started the apocalypse without a physical disability now having to learn how to navigate that,” she continues. “It felt like a story that would work really well for Aaron.”

How did Marquand respond to the news of Aaron’s disability? With great enthusiasm, according to Kang: “Ross is such a wonderful actor and such a trooper. When I told him that we were going to cut off Aaron’s arm, he was very down [for it].”

'Walking Dead': Who Will Die in Season 9?

“It gives us the opportunity to grow that character and give him new challenges and obstacles,” Kang says about how the development will impact Aaron’s future. “For us, one of the more hopeful aspects of the show is people getting knocked down and getting back up, and figuring out how to move on. They figure out how to overcome the things that are challenges to their survival. We felt like it gave a really interesting texture to his character this season.”

Will Aaron’s severed limb satisfy the bloodlust for fans wishing to see Rick finally lose his hand? Maybe not — and perhaps those fans still have Rick’s “behanding” to look forward to, given the hero’s coming exit. With limited time left on the clock, it’s entirely possible Aaron’s accident is setting the stage for an even more iconic (and even more faithful) pull from the comics.