[This story contains spoilers for season nine, episode nine of AMC’s The Walking Dead, “Adaptation,” as well as major spoilers from Robert Kirkman and Charlie Adlard’s comic book series on which the drama is based.]

Negan (Jeffrey Dean Morgan), eat your heart out. A new villain has arrived in the universe of The Walking Dead: Alpha (Samantha Morton), a deadly enemy with a weapon of choice that makes Negan’s bloodthirsty Lucille look like a Wiffle ball bat.

In the closing moments of “Adaptation,” the midseason nine premiere, the Queen of the Whisperers made herself known, following a clever trap she set for survivors Luke (Dan Fogler) and Alden (Callan McAuliffe). Moments after the two strangers bonded over music and planned to form a band for the upcoming community fair, Luke and Alden followed a trail of carefully laid arrows into the heart of the woods, where they encountered a group of Whisperers, including a shotgun-wielding Alpha, played by Harlots star Samantha Morton.

Is 'The Walking Dead' Mulling a Lauren Cohan-Led Spinoff?

Alpha’s arrival comes one episode following the official Whisperer reveal, in which the new group of enemies disguised as walkers were first unveiled in deadly fashion, taking Tom Payne’s Jesus off the board. Jesus’ death was a major departure from Robert Kirkman and Charlie Adlard’s Walking Dead source material. Alpha’s first appearance, on the other hand, is ripped straight from the pages of the comic, an image so iconic that it was the building block for executive producer and makeup effects master Greg Nicotero as he started considering how to design the Whisperers.

“We have had our fair share of villains on the show,” Nicotero tells The Hollywood Reporter, “but I remember reading the comic book and seeing that first image of Alpha with the shotgun. She had this weird, partially melted sagging skin and these human eyes. It was really chilling.”

The chilling imagery carries over into Alpha’s actions as leader of the Whisperers, at least as far as the comic book’s original account. Final warning: massive spoilers from the comic books are ahead. Proceed with caution. 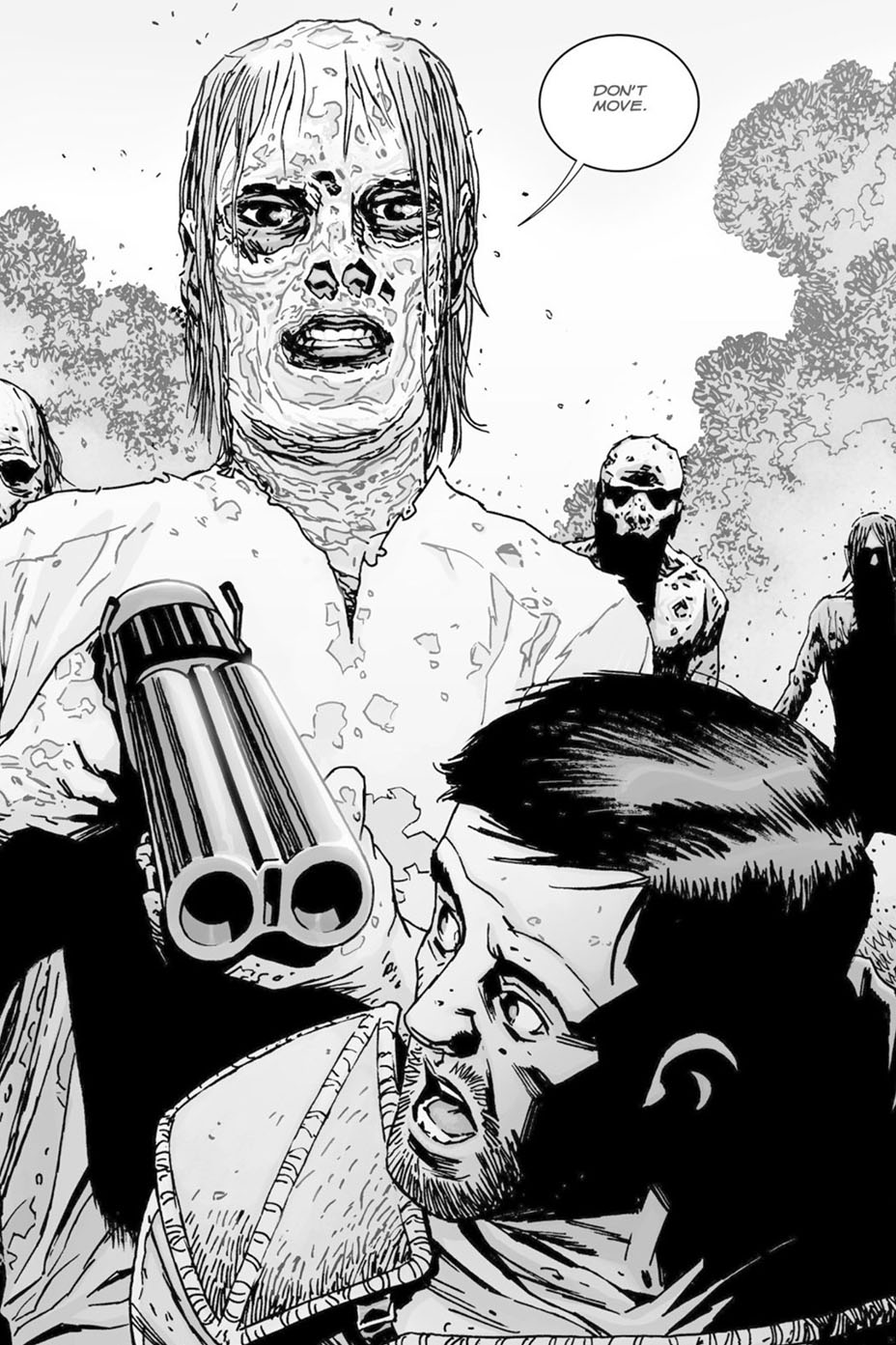 In the first telling of the tale, the bald-headed Alpha lives up to her name, striking fear into the hearts of not only her enemies, but her own people, obedient and primal in nature. As Whisperers, Alpha and her army believe that the apocalypse brought about the next natural step in human evolution. As a result, she leads a group of survivors who thrive in the zombie wasteland by blending in with the zombies themselves, wearing skin suits and walking among the herds.

In the comics, Alpha apprehends members of the Alexandria Safe-Zone community, due to what she perceives as a territory dispute. The person she kidnaps is someone who does not exist in AMC’s version of the story, but is nonetheless embodied in Alden. Luke, sadly, is no longer alive at this point in the comics, which may not bode well for the music teacher’s future in the TV series.

Tensions escalate even further when Alpha and Rick Grimes (Andrew Lincoln) finally meet. She tries to use her hostage as leverage for the Alexandrians’ possession of her daughter, Lydia (Cassady McClincy), first introduced in the midseason premiere. Alpha makes her threat level known with two breathtaking demonstrations of power: the unveiling of a huge herd of walkers at her disposal as a veritable post-apocalyptic nuclear warhead, not to mention the organized beheadings of several people from Alexandria, including two prominent characters who are still actively involved in AMC’s Walking Dead. These murders take place during the fair that keeps coming up in conversation throughout season nine; it feels like a natural endpoint for the current arc, as tensions with the Whisperers continue to boil.

While the Whisperers remain a thorn in the side of the Alexandrians for a good stretch of time, Alpha herself falls faster and harder than expected. The cause of her downfall: the aforementioned Negan, who infiltrates the Whisperers and grows close enough to Alpha to return the beheading favor. Perhaps he’s still a man to be feared after all, his recent relative redemption arc notwithstanding. Whether or not Negan and Alpha’s paths cross in such a fateful manner under the watchful eye of showrunner Angela Kang? That’s a question for the future of season nine to answer — and quite likely, one that won’t be settled until season ten.

'The Walking Dead' Just Took Another Major Detour From the Comics