For many Walking Dead viewers, the answer to the mystery surrounding Andrew Lincoln’s exit is bittersweet. It’s bitter because the face of the franchise is still leaving the flagship series… but sweet because he’s still actively involved in the universe, as AMC plots a film trilogy centered on the once and future Rick Grimes’ continuing adventures.

“Andy loves the show and loves doing the show, but doing the show just had some practical difficulties towards being in England,” chief content officer Scott M. Gimple tells The Hollywood Reporter about the reasons behind Lincoln’s Walking Dead transition. “Rick Grimes is an amazing character and he’s done an amazing performance and there were story ideas brewing that, as the years went on, seemed very compatible with continuing telling the Rick story in another format that would allow him time.”

It’s sweet relief for those who were not yet ready to part ways with Rick Grimes — yet, for some Walking Dead fans, bitterness remains the dominant taste. In its recent history, the AMC zombie drama has come under fire for executing misdirections that feel less like clever plot twists and more like active trolling. The two most famous examples center on the same character: Glenn Rhee, the original series character played by Steven Yeun, who was killed off in the show’s seventh season … almost one full season after his false demise.

For those in need of refreshment: Glenn appeared to die in season six’s third episode, “Thank You,” an episode that acted as a veritable love letter to the beloved character. Toward the end of the hour, while standing atop a dumpster, Nicholas (Michael Traynor) killed himself and fell forward onto Glenn, causing both bodies to plummet into a crowd of hungry walkers. The episode’s final image of Glenn was an aerial view in which it appeared he was being eaten alive, eviscerated guts and all.

For the next three full episodes, Glenn was presumed dead, thanks in large part to the series’ own efforts to misdirect viewers through tactics including scrubbing Steven Yeun’s name from the opening credits. Fast-forward to season six’s seventh hour, “Head’s Up,” in which it’s finally revealed Glenn crawled underneath the dumpster and survived his fate — an incident that subsequently became known in the fandom as “Dumpstergate,” as dubbed by those who predicted Glenn’s method of survival and were frustrated by the misdirect attempt.

“I don’t think this is any sort of new instance that broke the rules of our show at all,” Gimple told THR at the time, defending against the critics and the backlash that ensued. “I think it’s very much in line with everything we’ve done before. I don’t think there’s a credibility issue. It seems like there’s this growing sort of divide between the people who watch the show and the people who write about the show. There’s not a wrong way to watch it; nobody is doing anything wrong. I’m getting a lot different messages that are diametrically opposed.”

Frustrations surrounding the dumpster incident were heightened further due to Yeun’s eventual exit from the show, one that anyone within arm’s reach of a Walking Dead comic book reader saw coming: the infamous brain-bashing at the hands of Negan (Jeffrey Dean Morgan). Once again, Glenn’s fate was left hanging in the balance for an unnecessarily lengthy period of time; in the comics, Negan makes his arrival and kills Glenn all within the same issue, while the AMC adaptation stretched the moment out for the more than six months that spanned the season six finale and the season seven premiere. Glenn’s actual death episode, for what it’s worth, had the show’s second-biggest audience ever, with ratings declining at an alarming rate ever since. 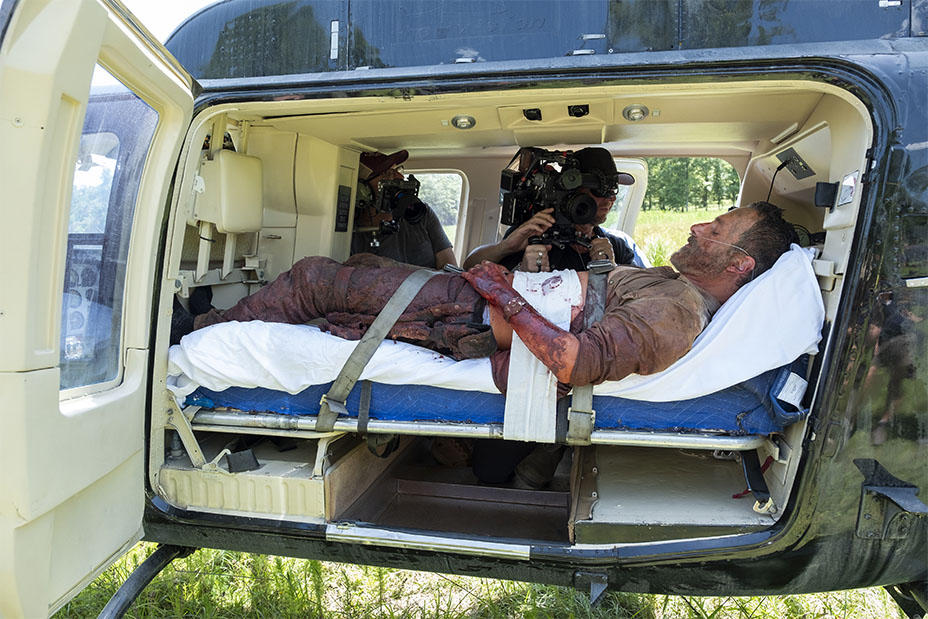 In light of that context, where does public opinion fall on the way in which Andrew Lincoln exited the Walking Dead series via helicopter, only to reprise his role in a slate of upcoming feature films — all after months and months of fans essentially coming to grips with the apparent inevitability of Rick’s demise?

Reactions have and will continue to vary on the matter as the audience continues processing the plot twist. Beyond the Twitter samplings (which are predictably all over the map from overwhelmingly positive to overwhelmingly negative) and other active corners of the online Walking Dead fandom (“I don’t know what to say right now. Hype Rick’s final episode up only to not kill him and then announce this? Feel like I should be excited but I feel like AMC pulled an AMC on me for the 100th time in a row,” one user wrote on Reddit), there’s this more tangible reaction: the Talking Dead audience, who responded with silence when Gimple revealed plans for the series of AMC Studios films centered on Rick Grimes.

For what it’s worth, news of Lincoln’s departure broke late last spring, a development that pushed the Walking Dead powers that be into the unenviable position of either ignoring the reports (which they did until Comic-Con), or tackling them head-on at the risk of setting up expectations. For his part, Lincoln would have preferred to pull off the move without any detection from the fandom whatsoever.

“I didn’t want it to feel like an obituary tour,” says Lincoln, weighing in on the expectations surrounding his exit from the series, especially after he revealed his impending departure at Comic-Con in July. “That’s why I was quite keen for it not to be disclosed [in advance], so people could experience it real time [and go], ‘What the hell?'”

“There was a lot of discussion, one way or the other,” adds showrunner Angela Kang, speaking with The Hollywood Reporter the week before Lincoln’s exit episode aired. “Andy really wanted people to follow the story, but of course, things leak. That’s the way it is. We roll with the situations as they unfold. The choice was sort of taken out of our hands.”

As the creative mind who has been building the runway toward Lincoln’s transition from Walking Dead series lead to feature film frontman, Gimple hopes Rick’s final appearance on the show (at least for now; all parties involved insist Lincoln won’t return to the TV series, despite Rick’s survival) won’t be received as an instance of baiting-and-switching.

“I hope it isn’t treated like a cliffhanger,” he says. “It’s a promise of more story, but I suppose cliffhangers in general are looked upon a certain way. I imagine no matter which way the story went, there would be people who loved it and people who hated it. I hope not for the latter, but I just think literally every entertainment that comes out now, that’s what happens. Certainly anything unusual or different in some ways gets that [treatment]. I would hope that people will be excited that the character isn’t dead and that there is more story to come — [but] not on The Walking Dead, not on the television show. I think that’s a really important thing that viewers should know, because maybe that is something where people will be like, ‘Hey, wait … what’s going on here?'”

“Any big move we make on the show, there’s some people who aren’t going to be happy with it,” adds Kang, “but I think there will hopefully be a lot of fans who are excited that his story is continuing. There have been conversations with Scott and Andy over time — like, for a long time — about what’s the entry into the [feature film] universe … so we tried to map out a way that the story was left open for him to transition into these other stories and hopefully more stories going forward. And we just concentrated on trying to tell the best version of that that we could in the episode.”

Fans who entered Lincoln’s final episode expecting his character’s demise, and therefore feeling cheated by his survival, should note that the reasons Gimple, Kang and even Lincoln gave for the actor’s departure over the past few months were all true all along: it was indeed a personal matter, as Lincoln could no longer spend months and months of his life at a time in Atlanta away from his family, based in England. Here’s the part that was left out of all that talk: Lincoln was more than happy to continue playing Rick, albeit in a more limited and focused capacity.

“Realistically I couldn’t give the time [to the series],” says Lincoln. “It was all about time, this decision. And for me to want to just do a limited number of episodes a year wouldn’t feel like I was doing my job properly, just because of the nature of playing this part has been so all-encompassing. I think I would get frustrated with that. So the idea of being able to contain the story and still work just as hard and tell a different story in maybe a more expansive narrative way seemed very exciting to me.”