The Walking Dead launched into its eighth season with its monumental 100th episode. For season nine, premiering in the fall, the zombie franchise has its eye on yet another number, and another milestone.

Image Comics and Skybound have announced the impending arrival of a massive Walking Dead box set collecting the first 144 issues of Robert Kirkman’s and Charlie Adlard’s horror comic, all in the name of the series’ 15th anniversary. The set will arrive Oct. 3, just in time for New York Comic Con 2018, and 10 days removed from “The Walking Dead Day,” Oct. 13.

Included in the set: previously released (but uncollected) origin stories for Negan, Michonne, Morgan, Tyreese and the Governor, as well as the first three (and currently only) Walking Dead compendium editions, covering events likely to transpire in the show’s ninth season.

Indeed, there’s one event in particular that should be of great interest to fans of the AMC series. Spoilers ahead, right after a first look at the box set… 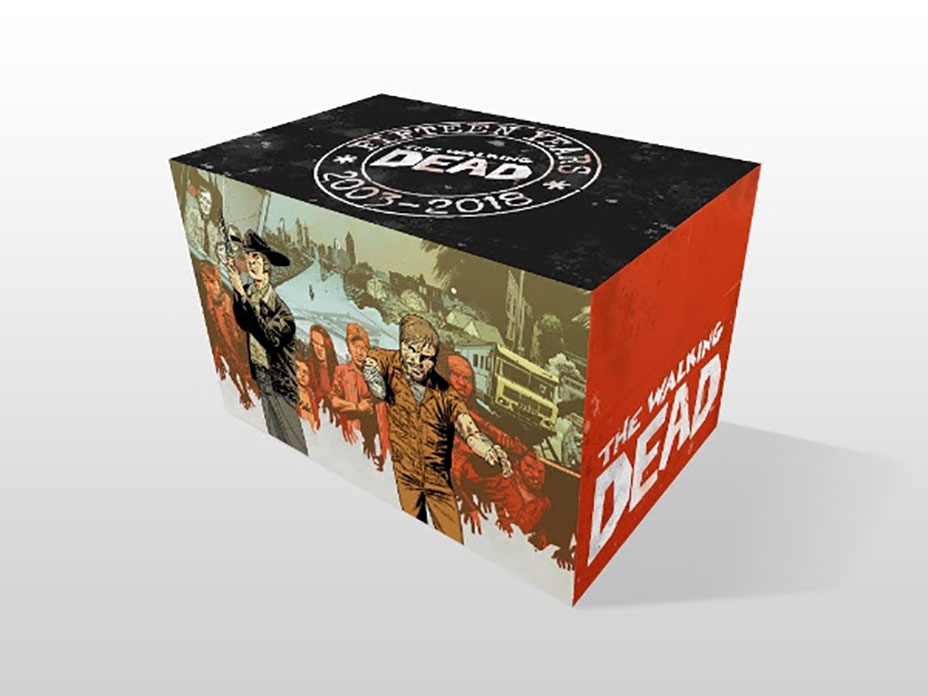 Still here? Then we’re assuming you’re ready to weather a massive spoiler from the comics, as well as some wild speculation about what could be coming up in the TV series.

The third Walking Dead compendium, included in the announced box set, ends with issue #144, one of the most unsettling entries in the entire series. In the issue, Rick makes contact with Alpha, leader of the Whisperers, a dangerous new group of survivors who flourish in the zombie apocalypse by wearing the skins of the dead. Alpha makes her people’s power known in two ways: first by showing off the massive herd of walkers she has at her disposal, and then by creating a border between the Alexandria Safe-Zone and her own community. It’s not just an ordinary border, either, but one that’s made with the severed heads of Rick’s friends and neighbors — including Ezekiel and Rosita, played by Khary Payton and Christian Serratos, respectively, on the show.

How 'Walking Dead' Just Set Up Its Next Glenn-Level Death

Are Ezekiel and Rosita headed for a similarly grisly fate in season nine of the AMC series? It’s not a foregone conclusion. The TV adaptation of The Walking Dead often takes major leaps away from the source material, due to its “remix” approach. (See: Negan bashing in both Glenn’s and Abraham’s brains, when it’s only Glenn who suffers this fate in the comics.) It’s entirely possible that Ezekiel and Rosita will be spared, with other prominent characters filling their void.

Indeed, there’s one character in particular whose head could very well wind up on the fence: Rick Grimes. It would be the biggest change between the comic books and the TV series to date, but it’s one we already know is coming in some way, shape or form, as Andrew Lincoln is eyeing an exit in season nine. Given the universe of the series, it’s hard to imagine Rick riding off into the sunset for greener pastures — hard, if not quite impossible. It’s much easier (if still rather painful) to consider Rick’s death, and in the spirit of that, is there a more stunning way to send off the face of the franchise than by using Rick’s literal face to announce the start of the show’s next major conflict?

For what it’s worth, if the TV show plays it straight with the launch of the Whisperer War, actor Khary Payton has already told THR that he’s more than ready for the occasion: “If and when he reaches his demise, that’s just the way this show goes. I don’t take anything that is written as anything more than something on the page, until they tell me that my head is dissected, or I’m killed in a different way from the comics. Or I might just hang around as long as Morgan and Carol, you know? You never know.”

Sound off with your theories about Rick’s fate in the TV series, and your thoughts on the Walking Dead box set, in the comments below. Keep checking THR.com/WalkingDead for more coverage.