For Greg Nicotero, the road toward The Walking Dead didn’t start 100 episodes ago. It started when he was 12.

A legend in the film and television industry for his pioneering work in visual effects, not to mention his status as an executive producer and director on the AMC zombie series since the very earliest days, Nicotero remembers what it was like to be a young kid with an overwhelming passion for the movies he loved — a passion he couldn’t express as easily as fans can express themselves today.

“I always talk about the fact that now, it’s easier to be a fan of these things. You can just go online and find out almost anything you want to know,” Nicotero tells The Hollywood Reporter, looking back on his earliest days as a film enthusiast. “But when I was a kid, you had to really work at it to be a fan of movies.”

For Nicotero, that meant seeking out the pieces of movie memorabilia that inspired him the most: posters. By his own recollection, Nicotero’s childhood bedroom was positively plastered with posters and stills from his favorite films: “It was such a source of inspiration for me, staring at the artwork, or even having a still from a movie that I loved. It was back then before the internet and before VCRs and DVD players existed. There were very few ways for you to connect with a movie that inspired you or blew your mind. To me, the first way was to buy the poster for the movie.”

Much has changed since then, including the fact that Nicotero has gone on to become an award-winning filmmaker as the co-founder of KNB EFX Group. One thing that hasn’t changed: his love for posters. As The Walking Dead started rapidly shuffling toward its milestone 100th episode, airing Oct. 22, Nicotero started musing on ways to combine his love for posters and his love for the show he’s worked on for the better part of a decade. The idea was finally cracked during a fateful conversation with series lead Andrew Lincoln.

“I was standing in front of the Sanctuary with Andy, shooting the first episode of [season eight], and we started talking about this idea that I had,” Nicotero remembers. “And he said to me, ‘What if we did The Exorcist, and you use the front of the Sanctuary as the building, and you have a stream of light coming out, with Rick Grimes standing there?’ And I looked at him and went, ‘That’s exactly what I’m talking about.’ It was just perfect.”

From there, Nicotero called upon two of his KNB associates, Michael Broom and John Wheaton, to team on a series of posters meant to mash The Walking Dead and classic movies together. The result: iconic images from Back to the Future, The Thing, Alien, Raiders of the Lost Ark and more, all paired with a unique Walking Dead twist. Rick Grimes would find his way into a redesigned Thunderball poster, for instance, while Negan (Jeffrey Dean Morgan) would smash his baseball bat through a bathroom door a la Jack Nicholson in The Shining. The posters found their way onto Nicotero’s Instagram page in the weeks leading up to the Walking Dead season premiere, and now, they’re reproduced here, including several posters that have yet to see the light of day.

“We had a really, really good time. I thought it was a great opportunity to celebrate that we’ve done 100 episodes, by looking at other classic titles and skewing them toward the world of The Walking Dead,” he says of the series. “I found an opportunity to celebrate what I love about the show and what I know fans love about the show, too: the community of people who embrace the pop culture aspect of filmmaking and movies. I can’t get enough of it. Being a collector of movie posters and props and things like that, it was just another opportunity to live vicariously through these movie posters that I love so much.” 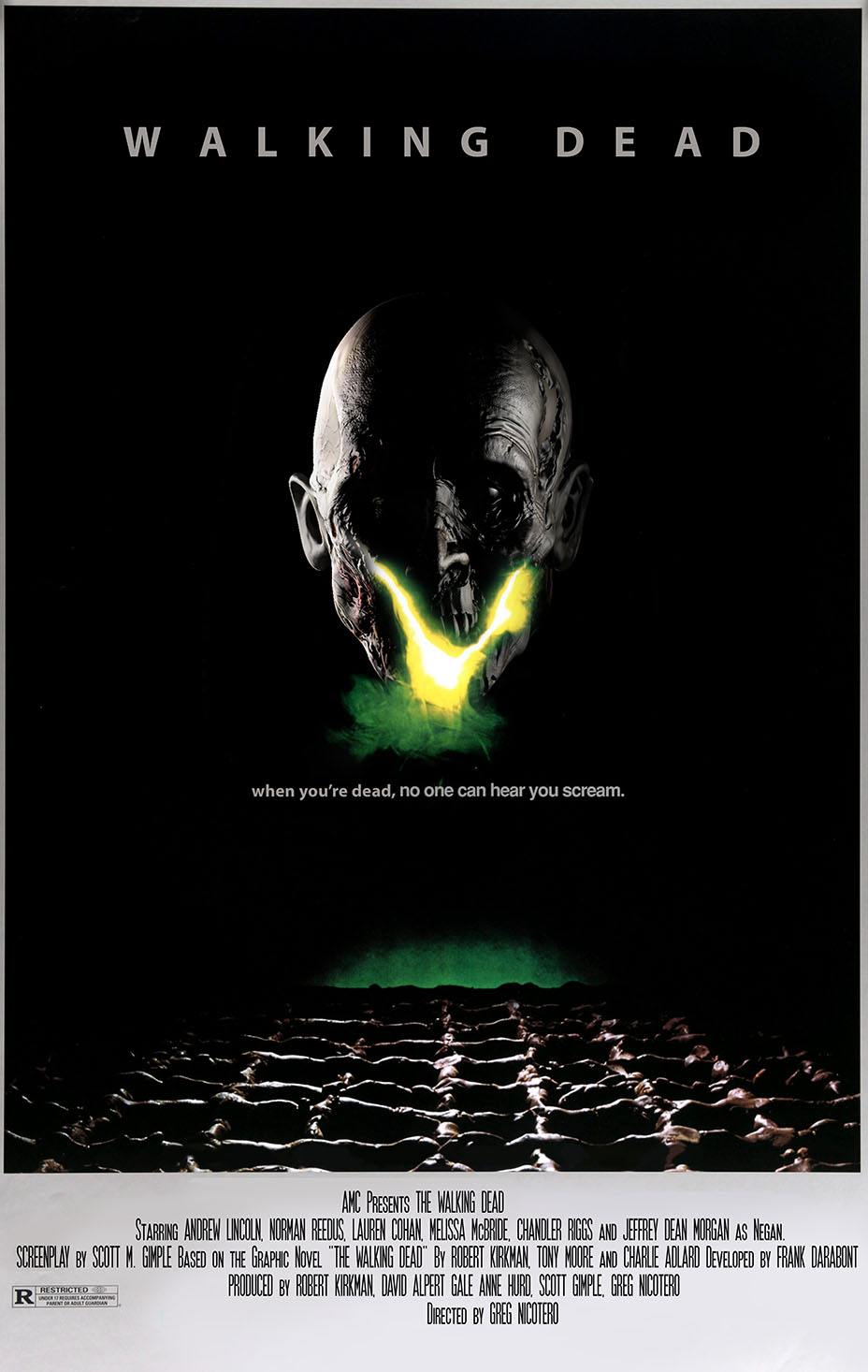 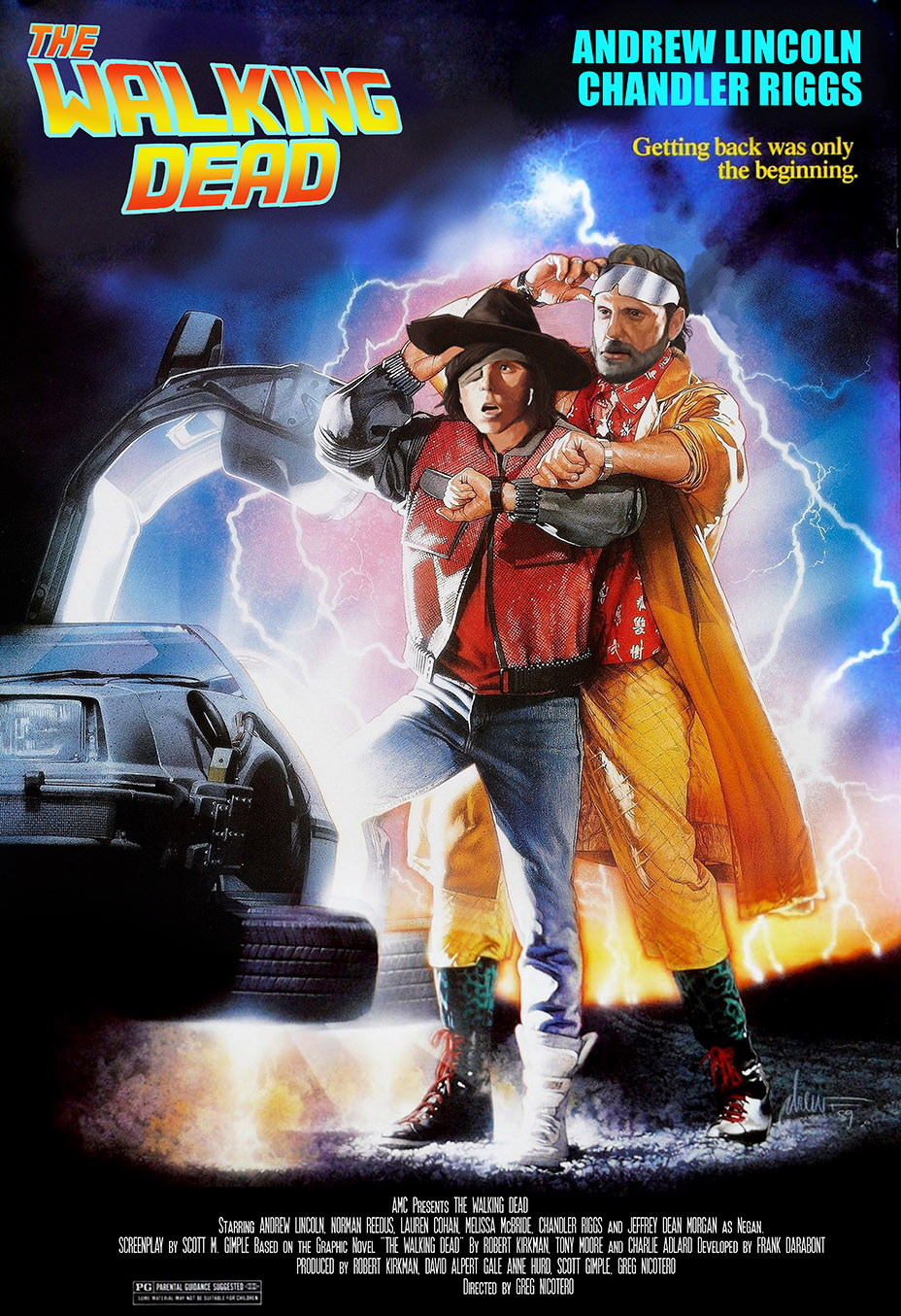 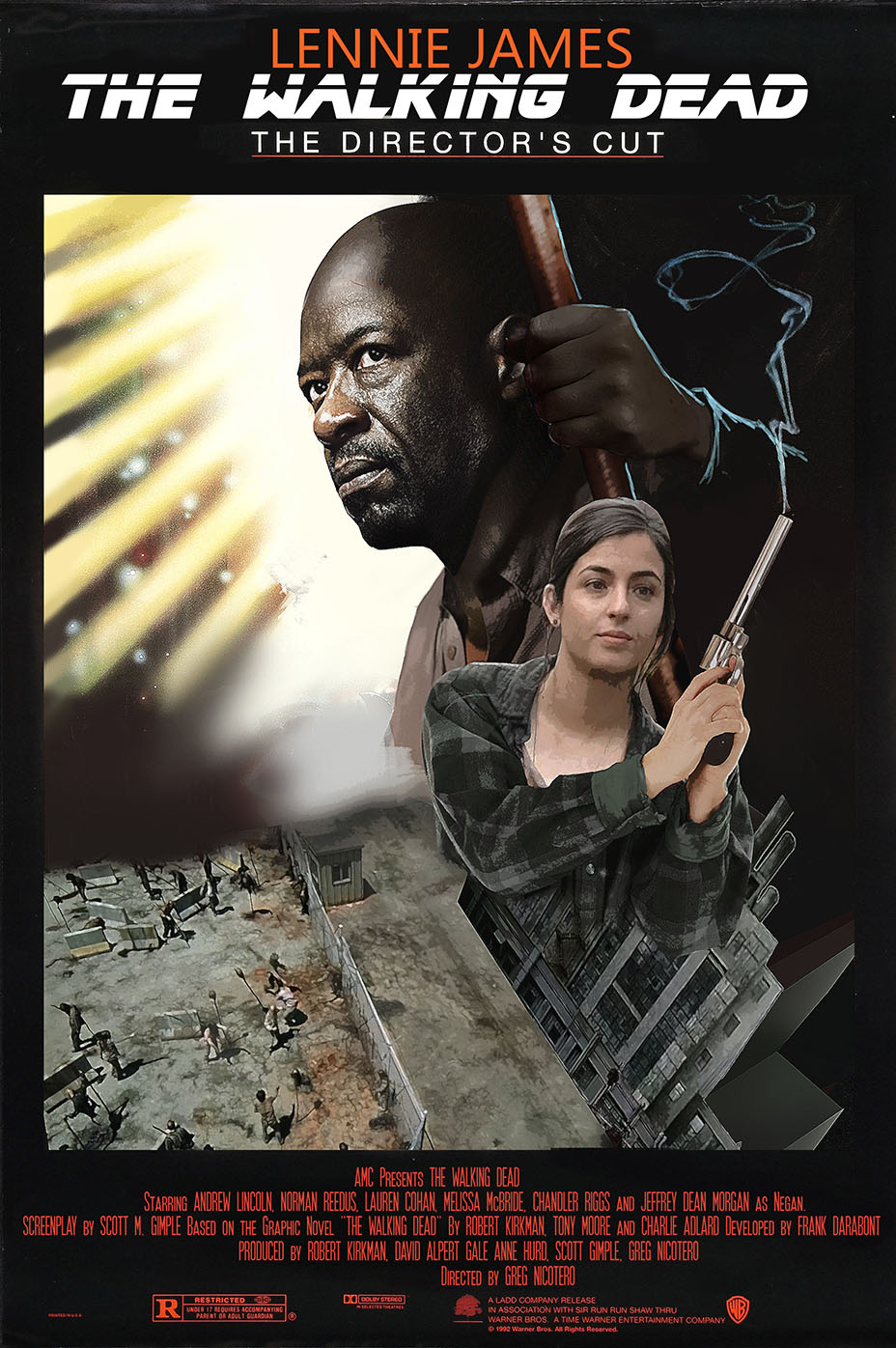 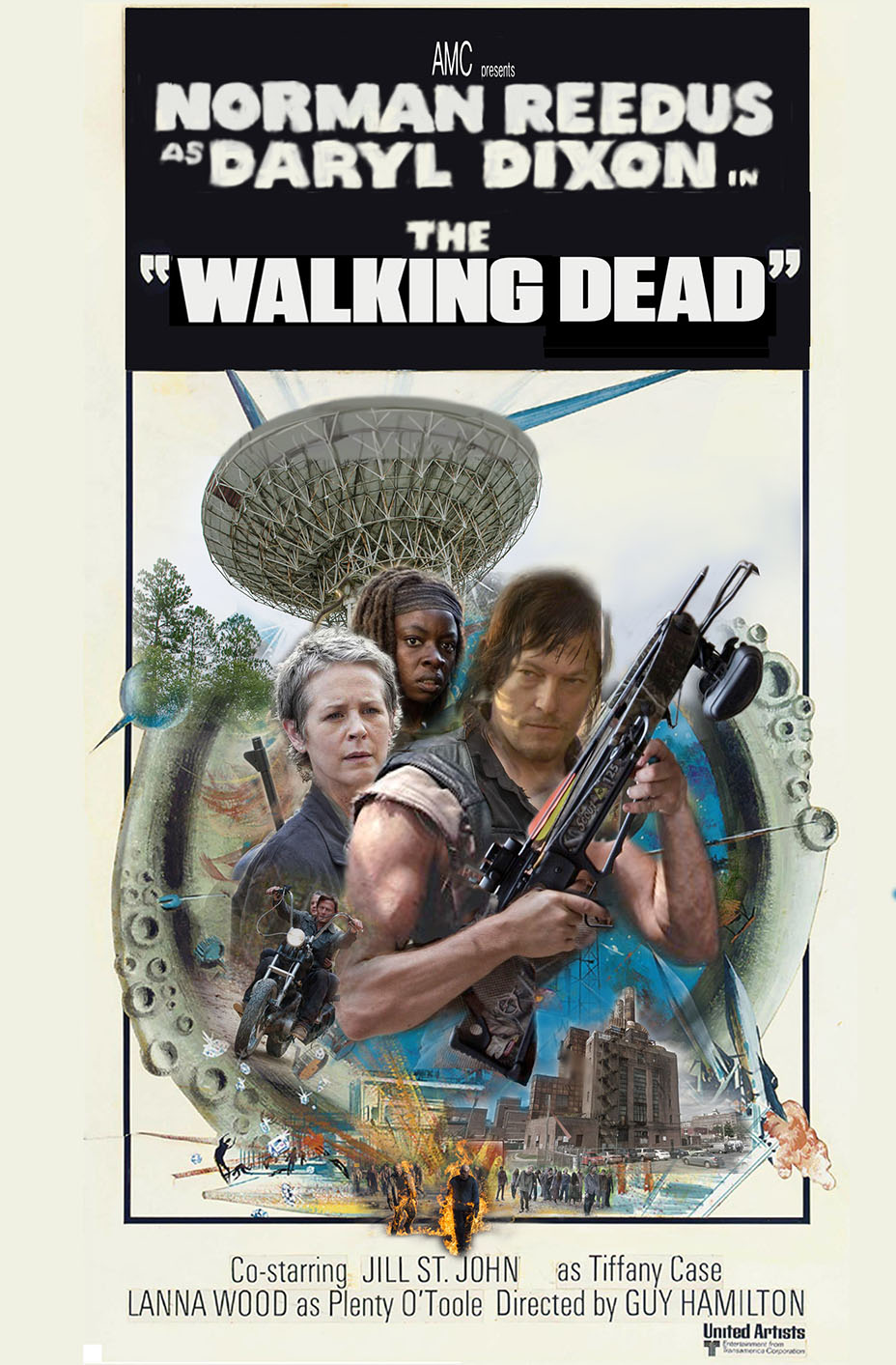 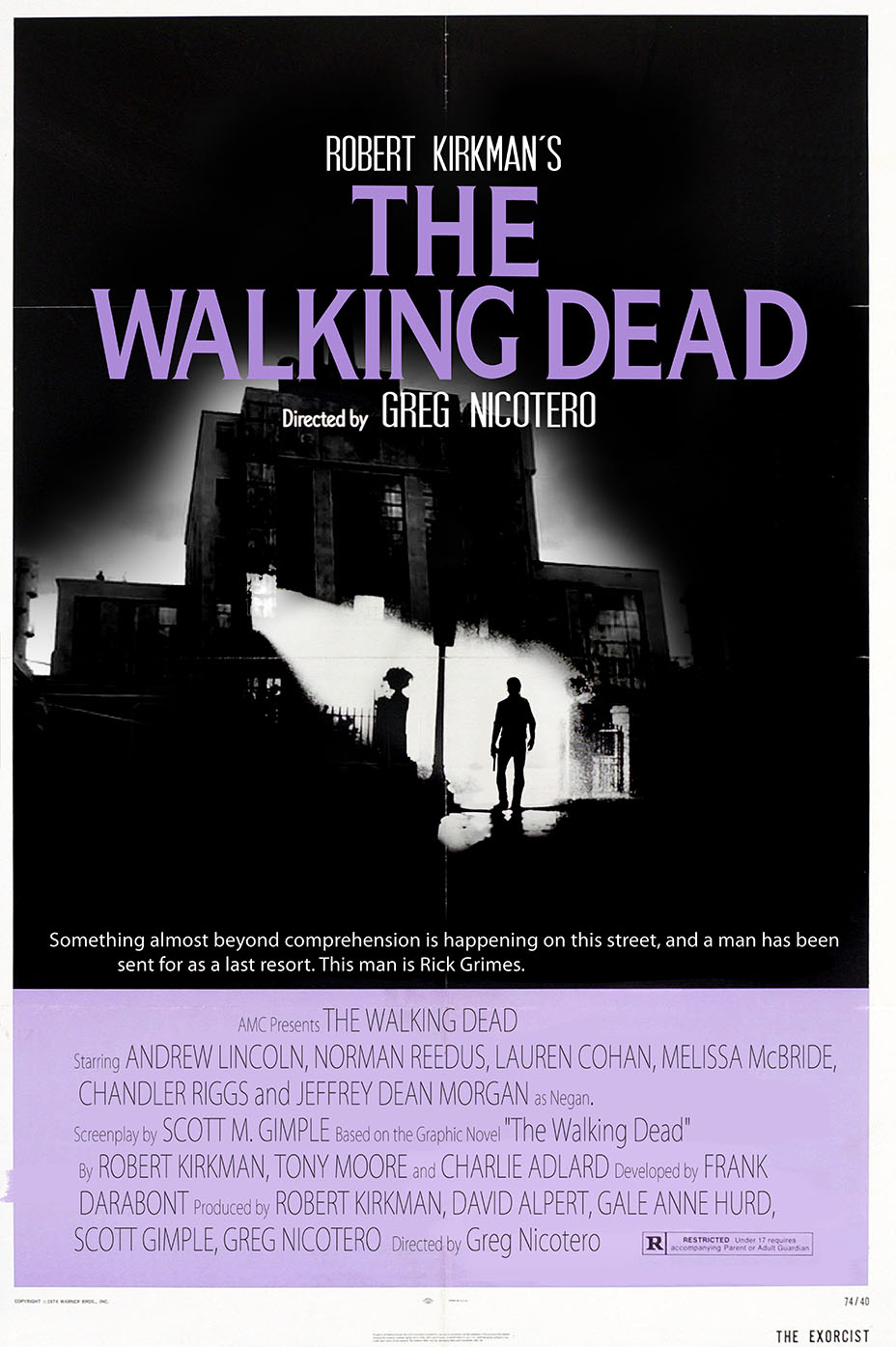 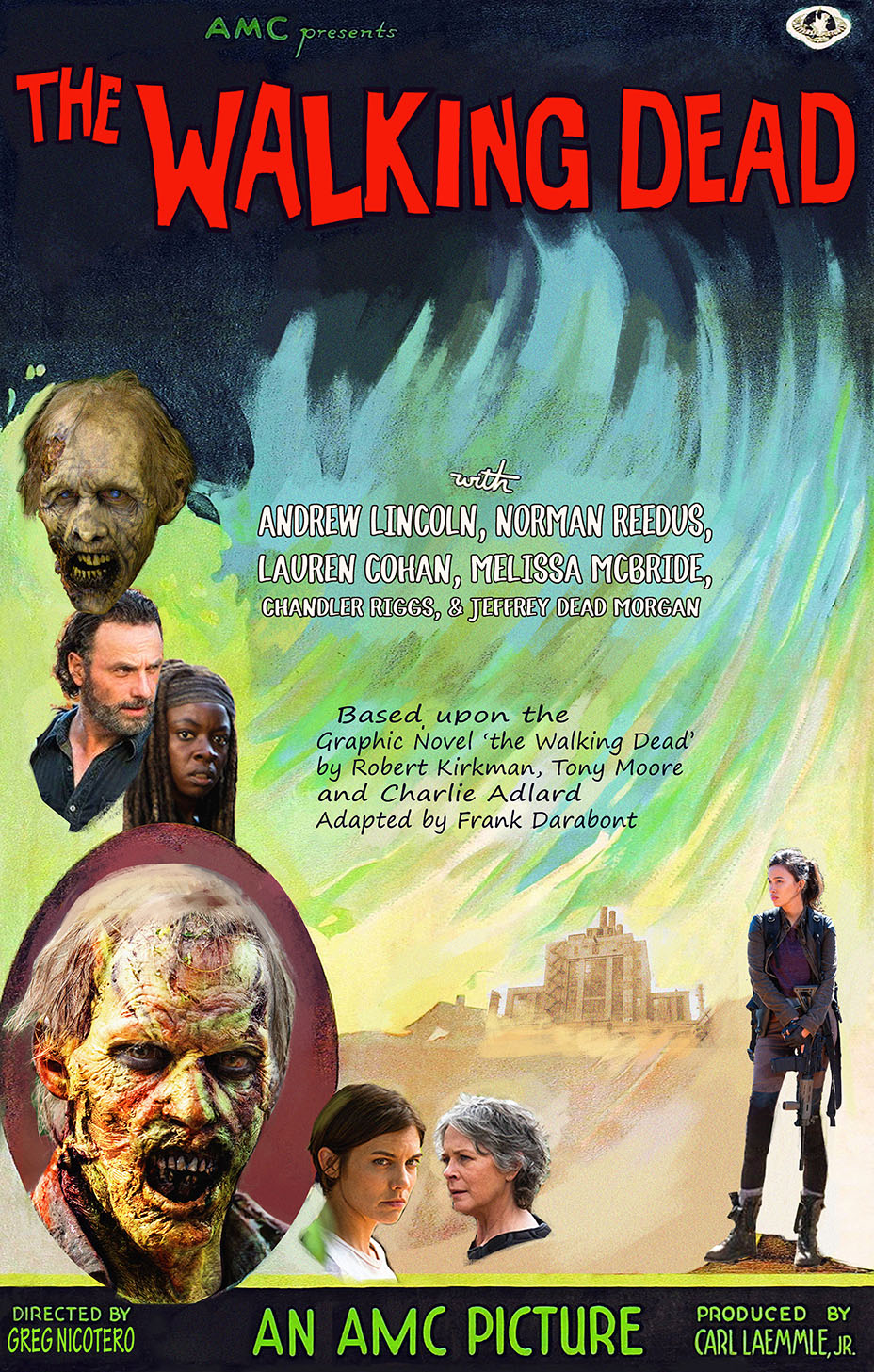 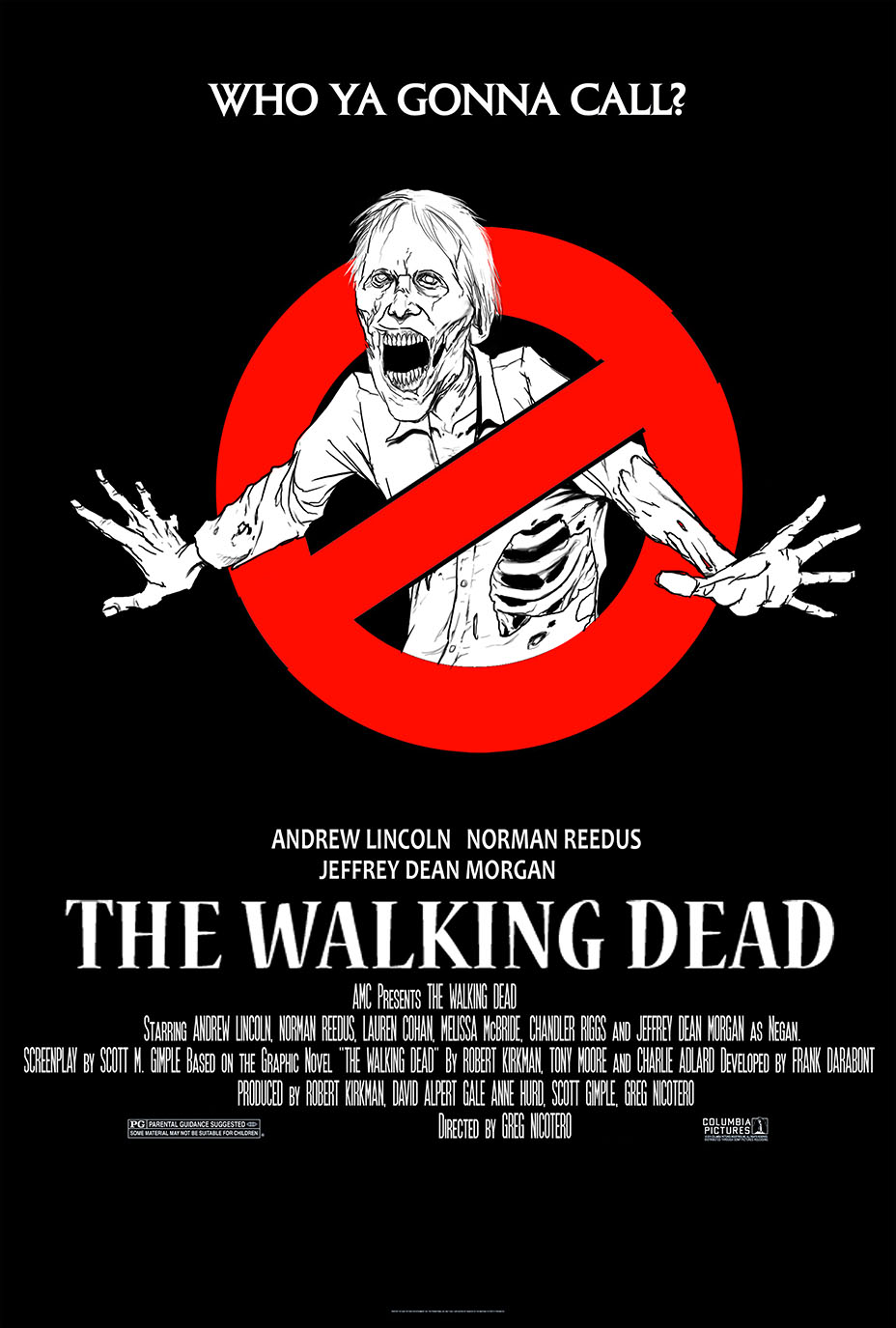 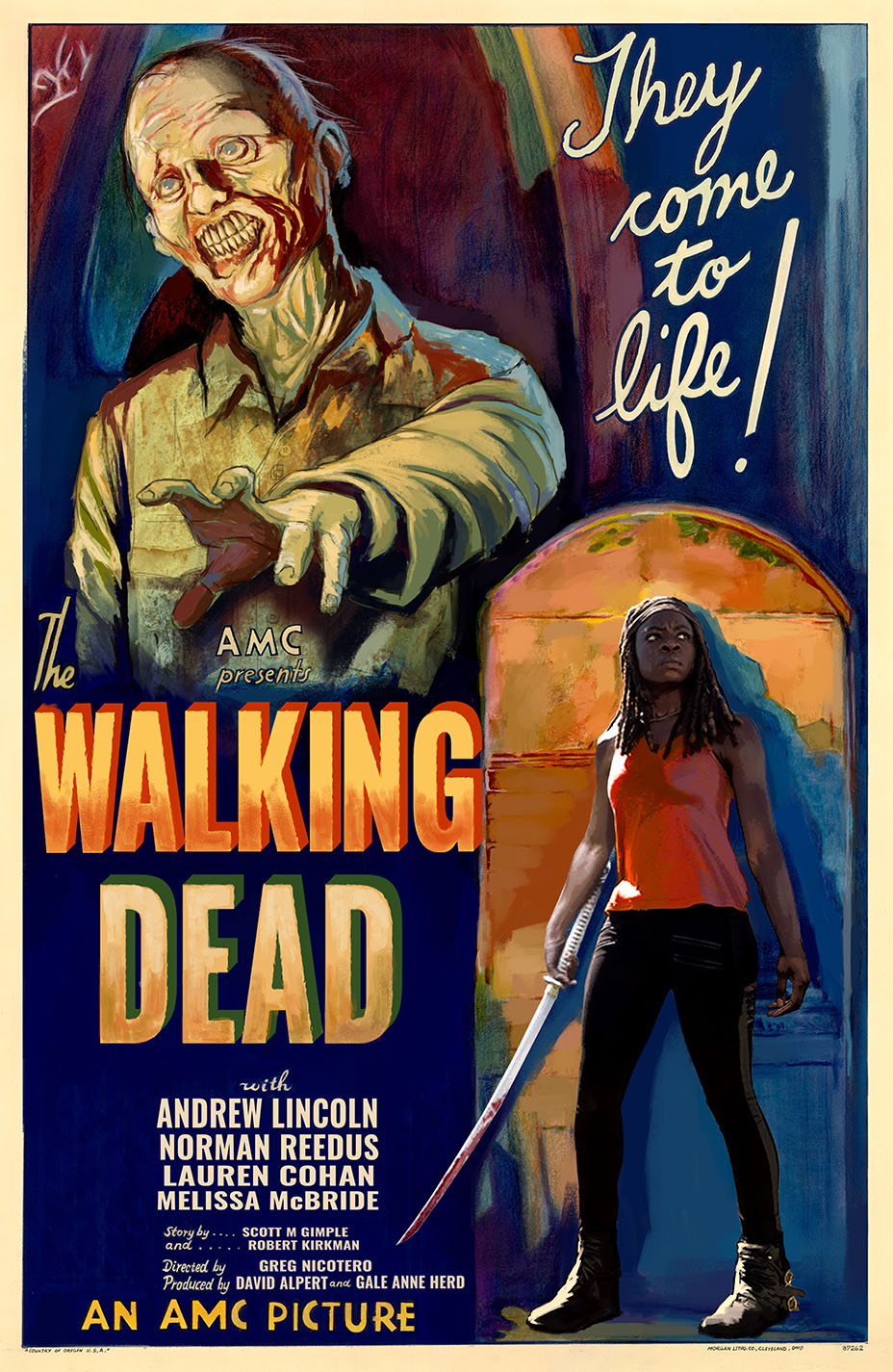 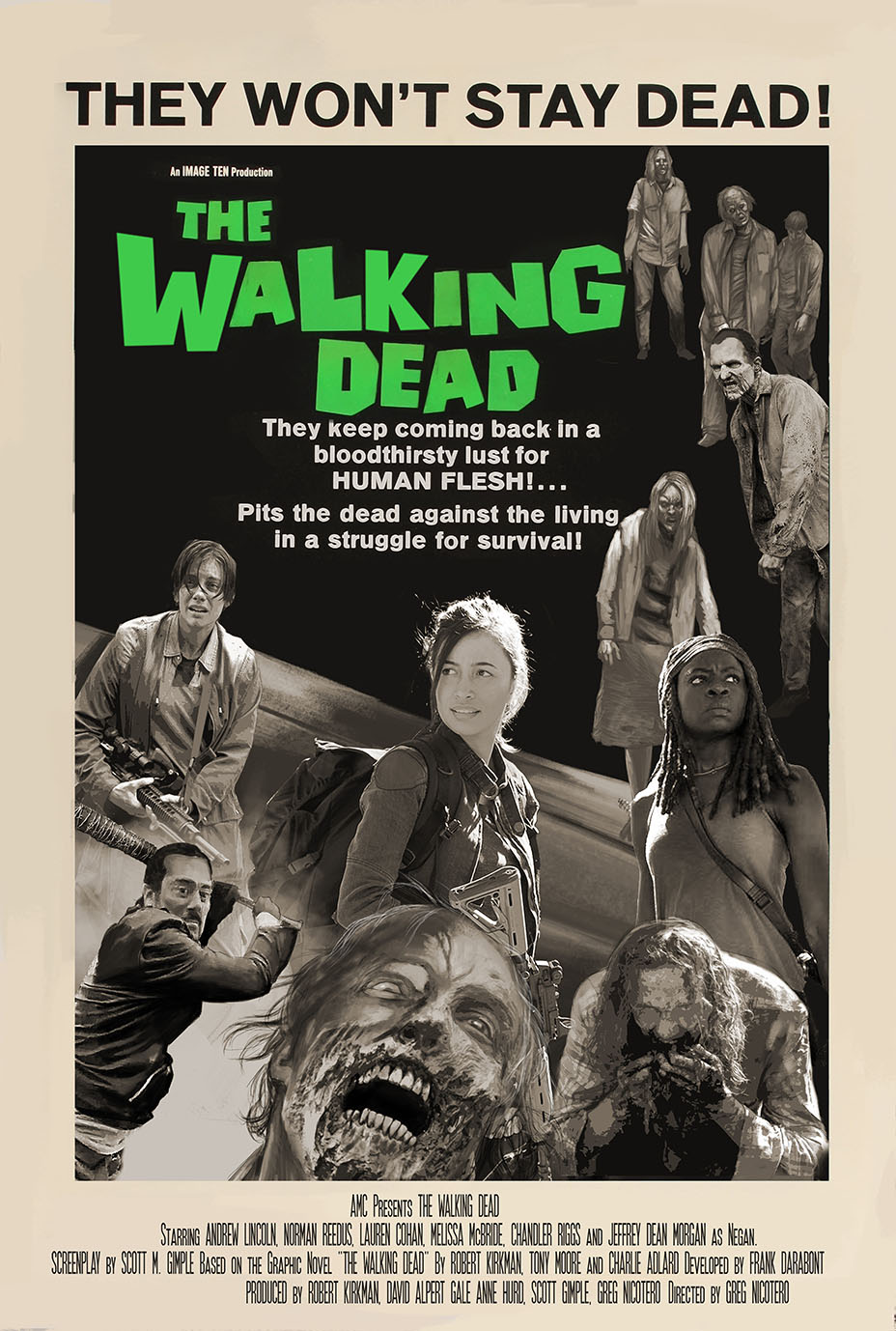 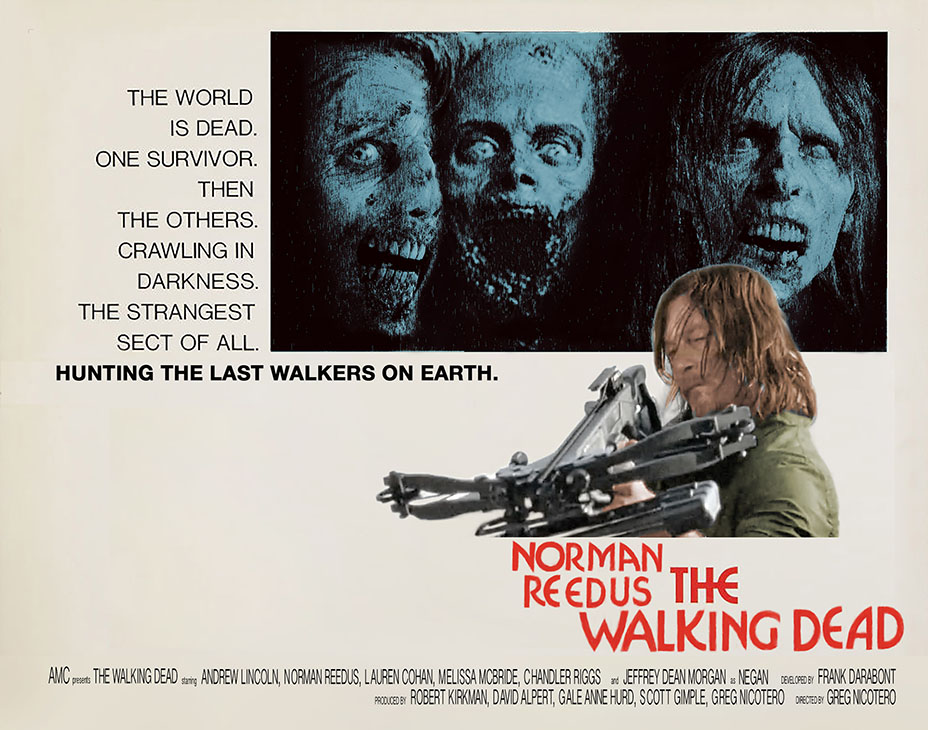 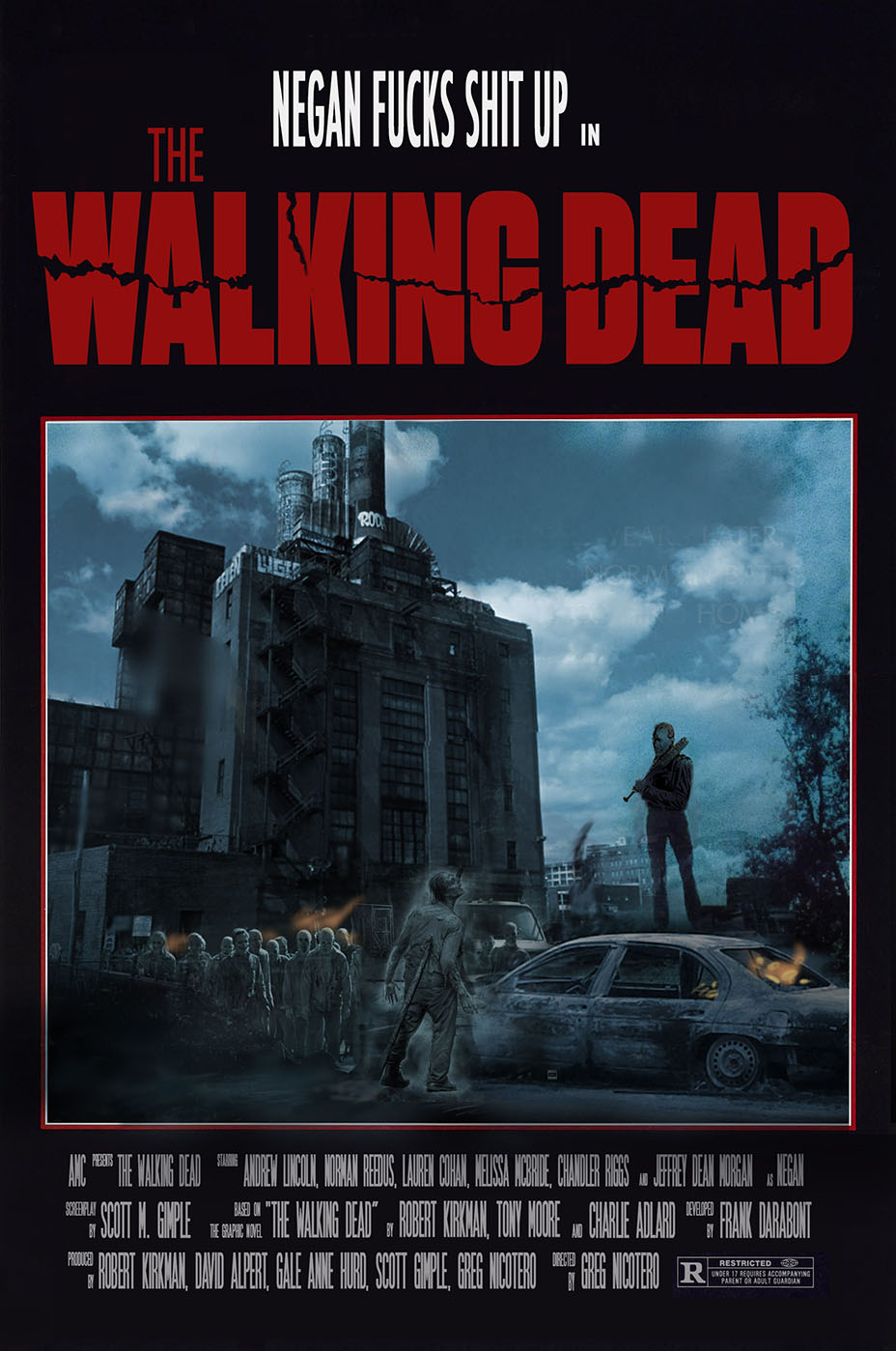 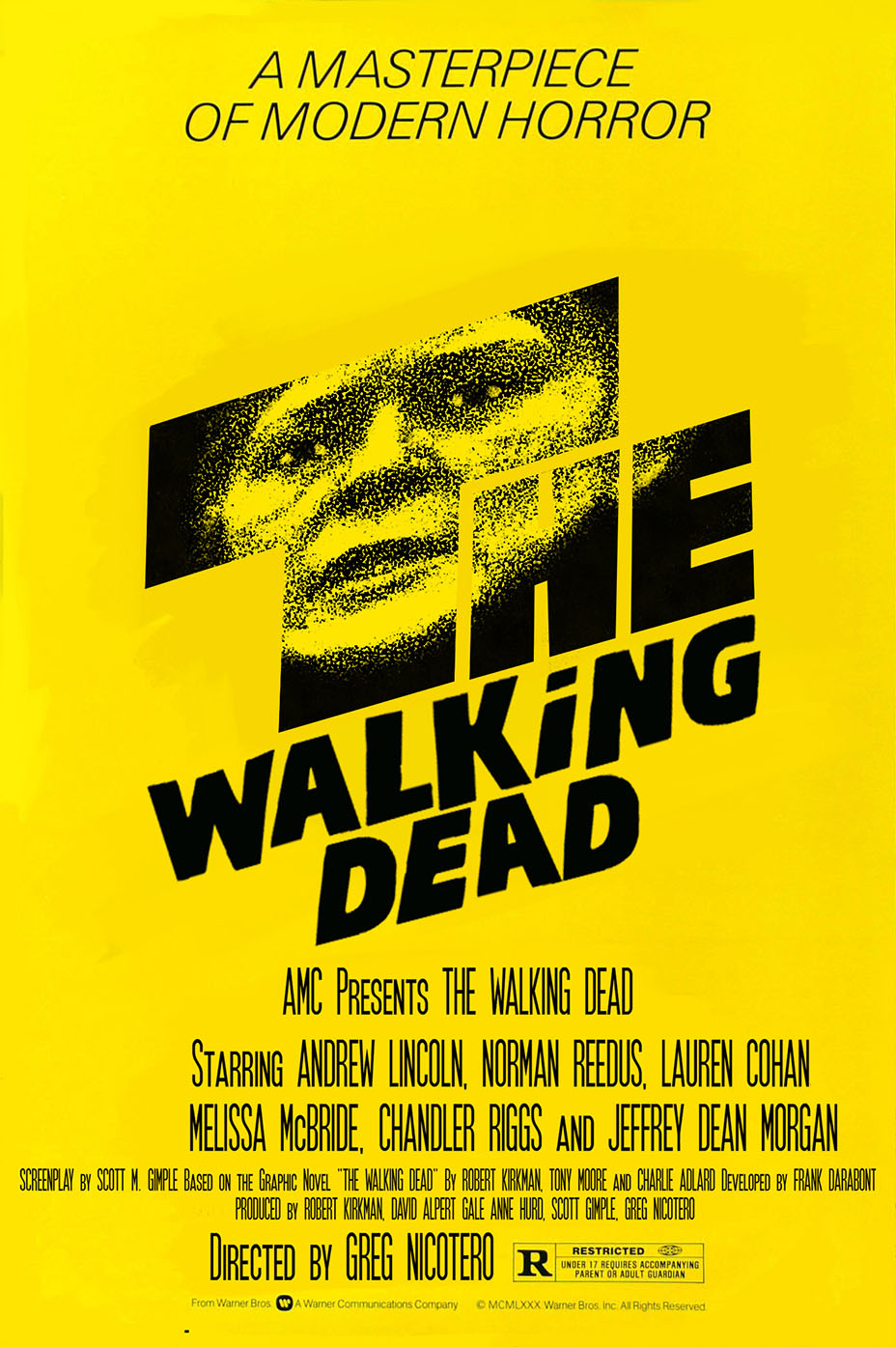 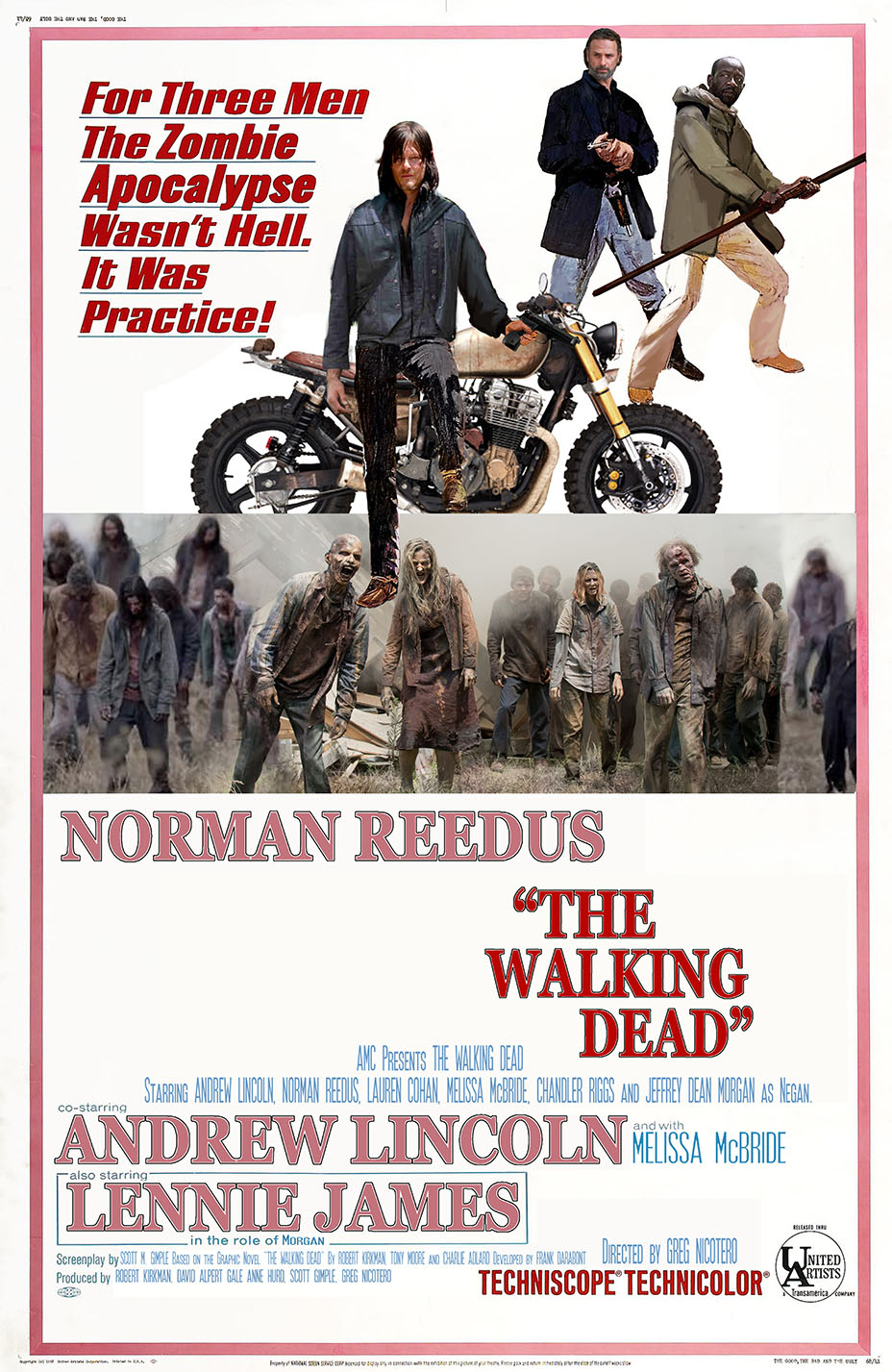 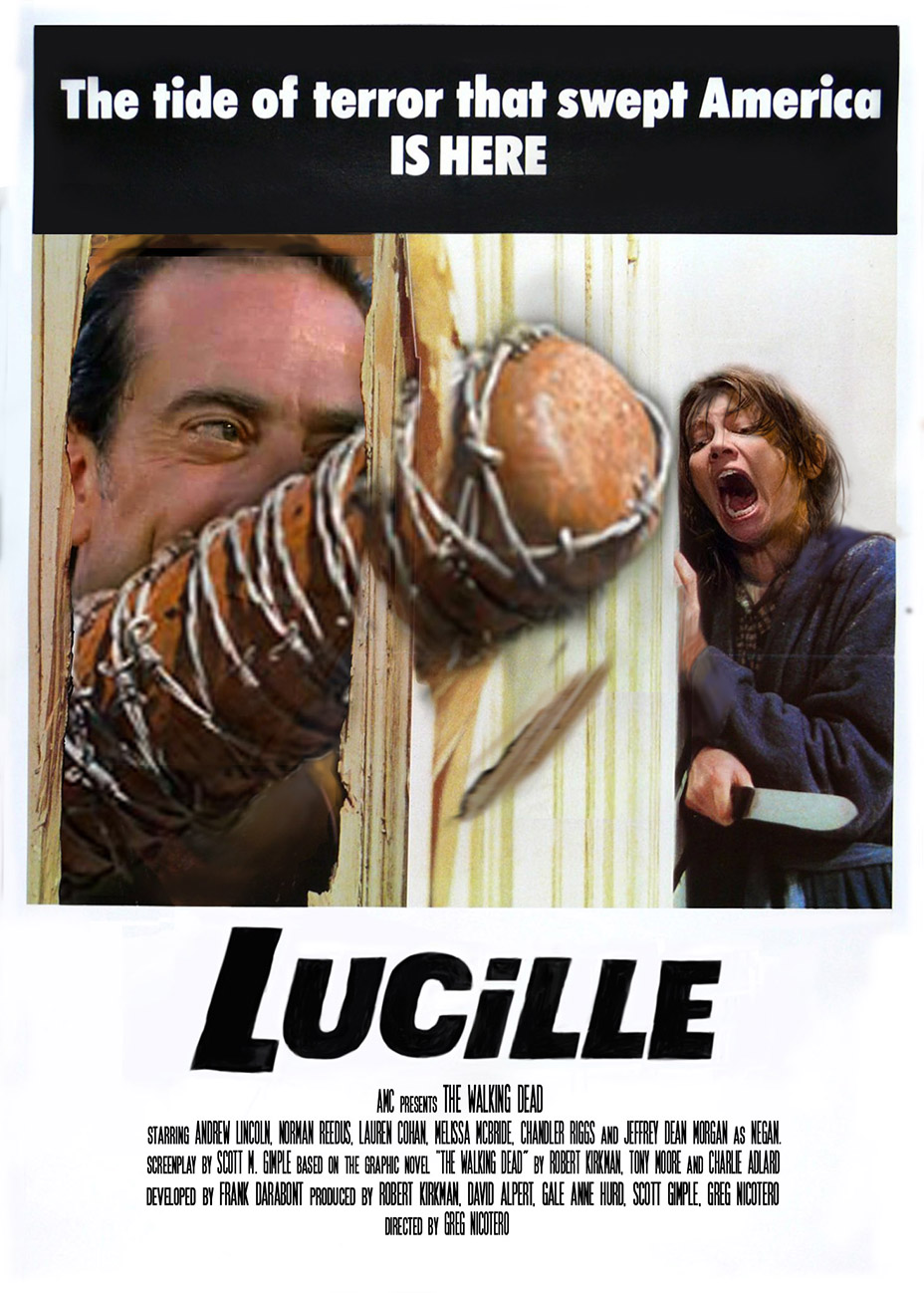 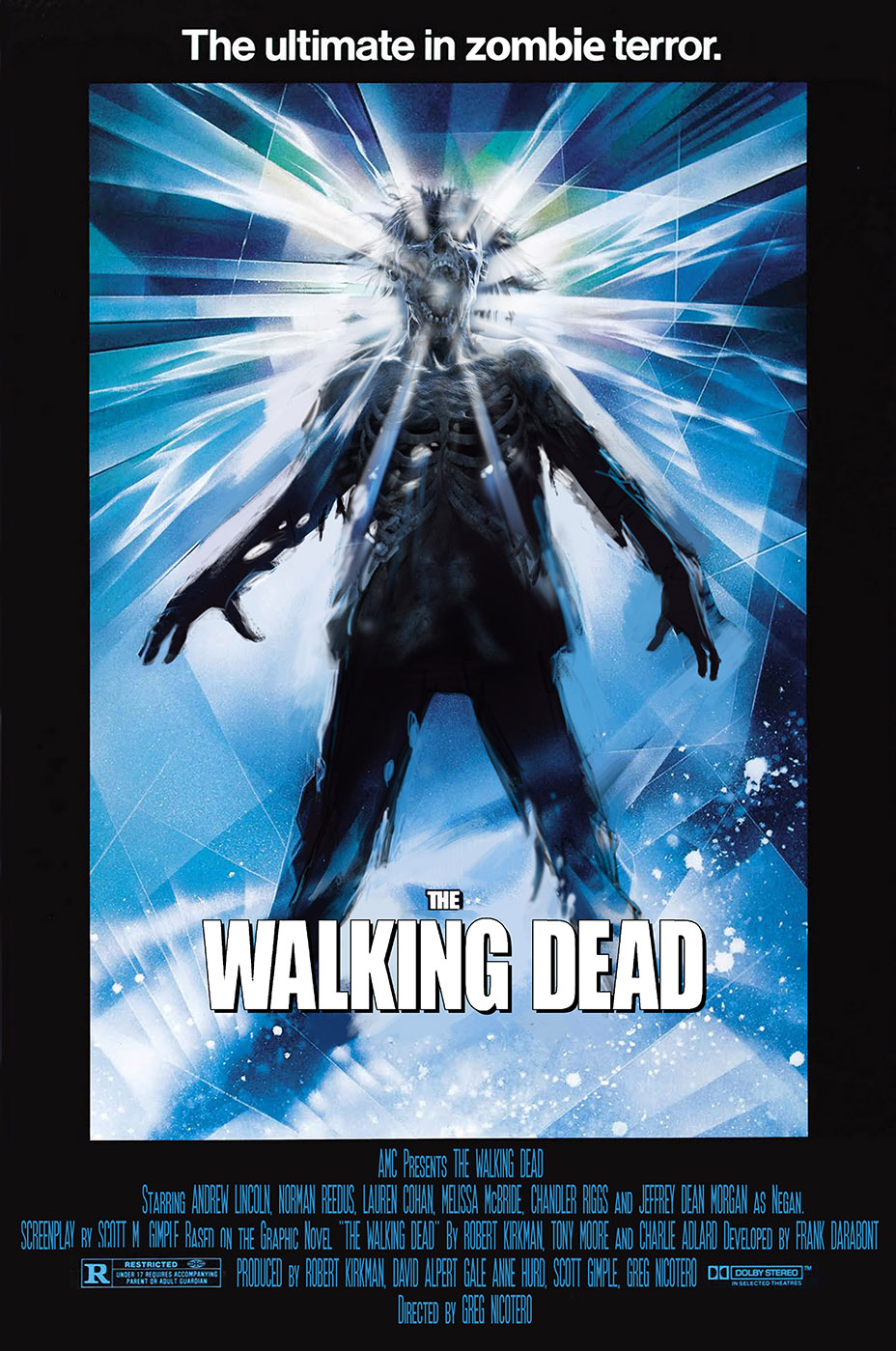 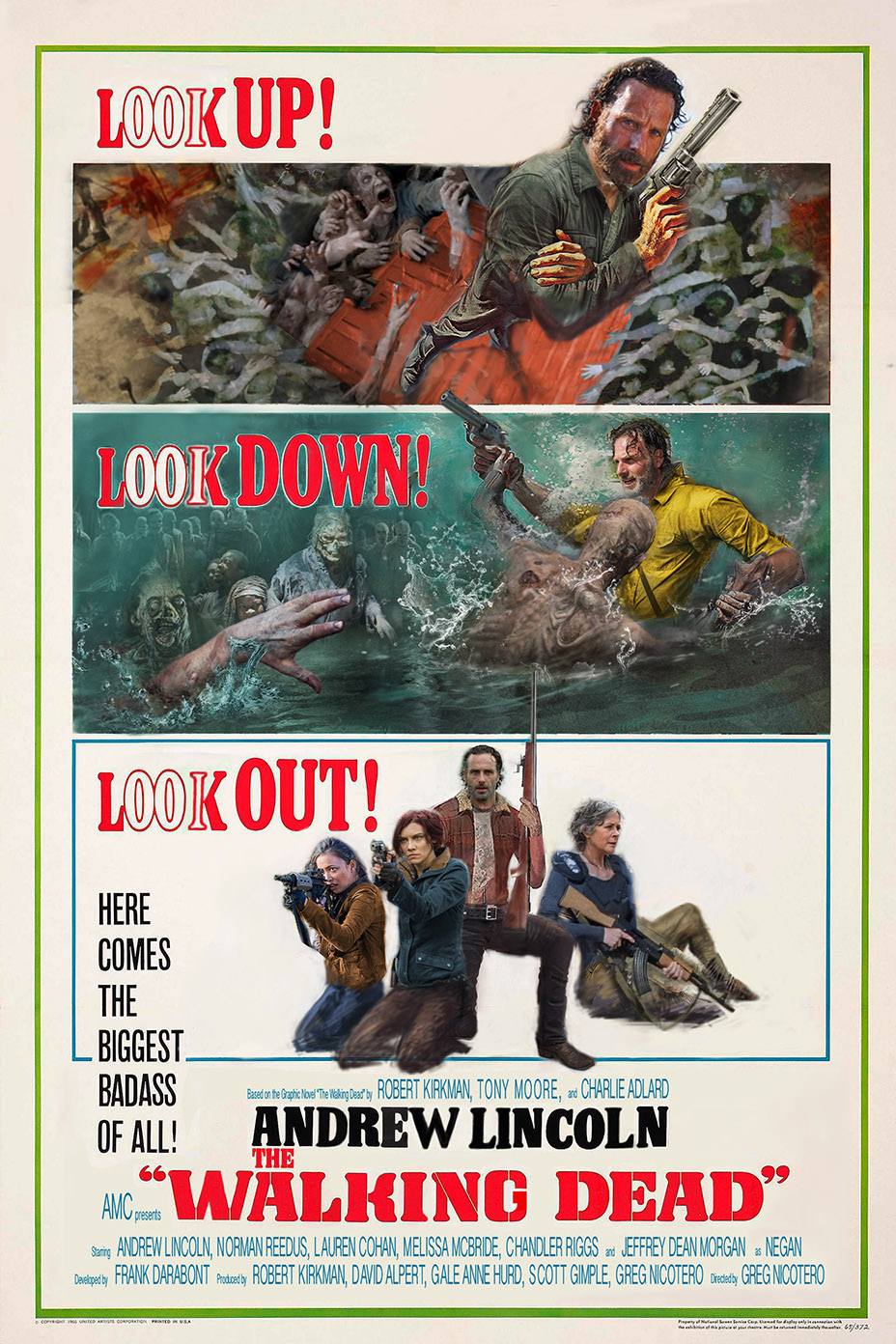 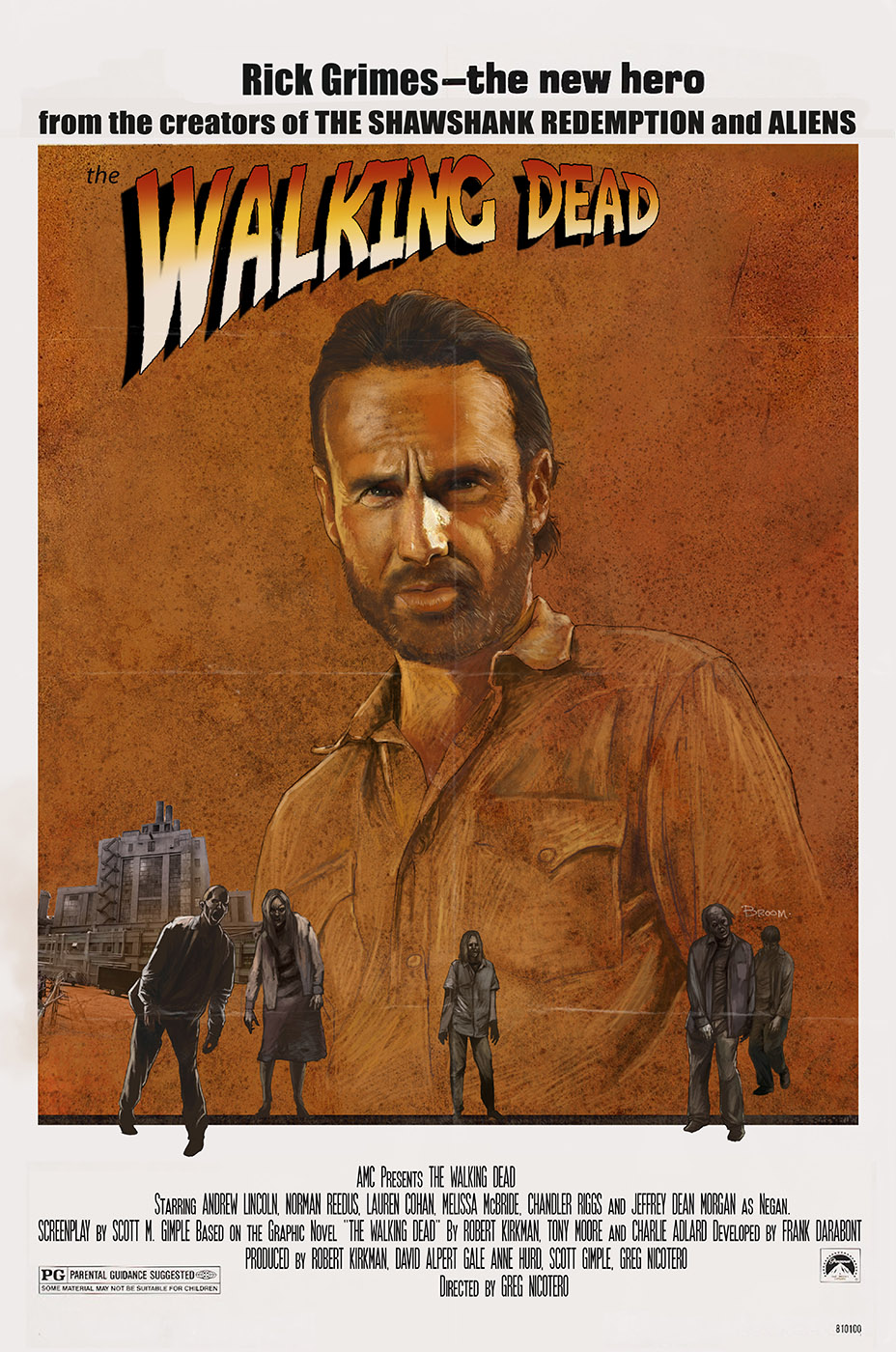